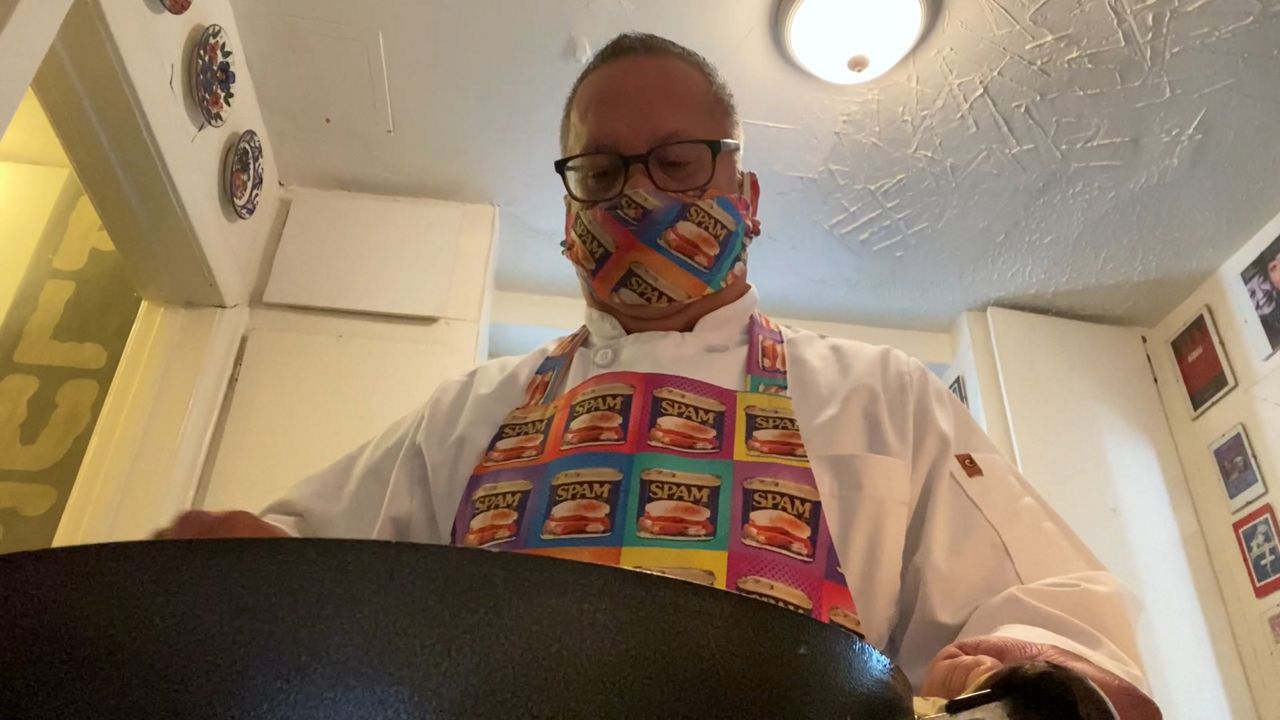 When the pandemic started, Rivera was hungry for community, comfort food, and a creative outlet. He found the ingredients for all three in his tiny Hollywood kitchen.

"Well, this is my Flip Kitchen," he said of the movement he whipped up here.

It started with a longing to reconnect with his roots by learning to cook dishes his mom would make when he was growing up in the Philippines. He scoured the internet for recipes but found the only problem was scale.

"A lot of the Filipino dishes are, you know, not meant for one person," he said. "A lot of them are meant for six and seven people."

This generated a lot of leftovers, so he'd post a picture on Instagram asking, "Who's hungry?" Many of his theater friends raised their virtual hands.

"There [are] a lot of people in the arts who don't really have a lot of resources these days," he said. "I said anyone who is [an] artist who wants to have some food, just come over."

In April, he began this practice—a way to keep busy—while his theater, Playwright's Arena, was dark. He's even got the right costume: a chef's coat his sister sent him that helps him slip into character, not to mention a matching mask and apron set with pictures of cans of Spam.

"This is my theater now," Rivera said as steam rose from the pan in front of him. "This is how I create art—[it] is through food."

Although he doesn't really keep track, in 2020, he thinks he served about 300 meals. Two months into this year, he's already served 100 more, whipping up two dishes a day, six days a week.

"And I just give it away," he said, which isn't to say he gets nothing in return. Although he insists it's not necessary, many of his friends show up with something to exchange like lemons from their tree, which he uses in his cooking, take out containers of all shapes and sizes, and food from their own culture.

"Someone brought me a Nicaraguan tamale," he said. "I had not had that kind of tamale, and it was so, so good."

Actress Evie Abat recently got a container of pancit and a heart full of gratitude.

"It's brought the whole community together," Abat said. "We're still here; you know what I mean? The theater community is still here, and we will be full and energized with Jon's food and ready to get back on the stage once the theaters open."

It's these little encounters that really feed Rivera. Like theater, his Flip Kitchen has become a venue for connection and communication.

"I live alone," he said. "Outside of Facebook and social media, there is no interaction with the outside world, so the two minutes that they come over to pick up food, I get to see them. I get to say, 'Hello.' I get to say, 'Oh my god! What are you doing? How are you surviving?' That part of it to me was really important."

Although Rivera originally posted his meals on his personal Instagram page, he recently launched a dedicated account. To see what's on the menu each day, follow @Flip_kitchen.