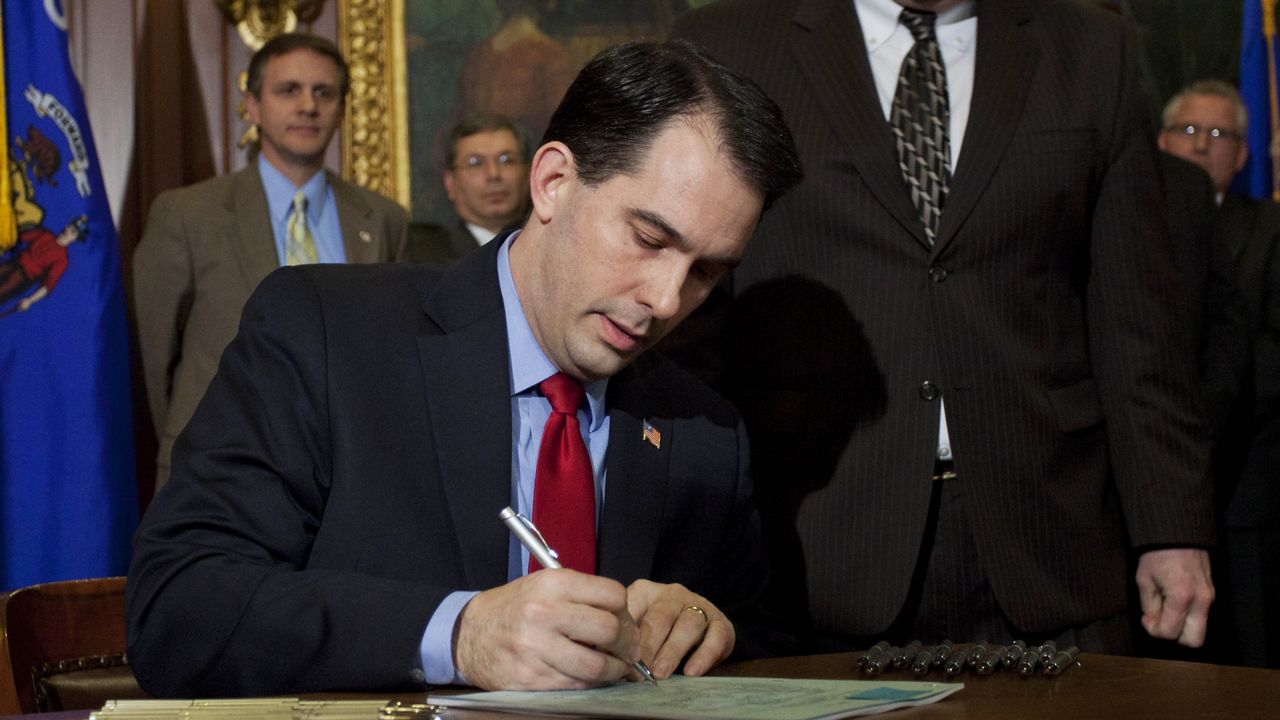 Spectrum News 1 Political Reporter Anthony DaBruzzi spoke with Walker about the law that defined his career in so many ways.

A decade later, when you reflect upon Act 10, what comes to mind for you?

You know, Act 10 at 10 is not only savings. You know, one report last year put it over $12 billion worth of savings to local and state taxpayers. But also, more importantly, the ability for schools and local and other governments, to be able to staff based on merit, to pay based on performance. That means, for example, at schools they can put the best and the brightest in the classrooms and keep them there, and as a former local official that was one of the really important things for me.

It wasn't just about balancing the budget. It was about empowering the people who are duly elected to run our schools and our local governments, to be able to do that. And that's what we see now, even 10 years later.”

In this Feb. 17, 2011 file photo, Wisconsin Gov. Scott Walker talks to the media at the State Capitol in Madison, Wis., in response to 14 state Senators leaving the state to block his bill that would eliminate collective bargaining rights for many state workers. (AP Photo/Andy Manis, File)

When you talk about enabling those leaders on a more local level to have that kind of power, how did you come up with this as a solution to solve the budget problems that were facing Wisconsin at the time?

“Yeah, when I came in remember I'd been in local government. I was the Milwaukee County Executive for years, and the year before I was governor, the governor and the legislature, controlled by Democrats at the time, faced an economic crisis, a fiscal crisis. And so they cut, which is often the case, they cut money to local governments like schools, county, and municipal governments. And so I saw it firsthand.

I tried to be creative. I tried to do 35-hour workweeks once a month for a couple of months to try and avoid massive layoffs and the union bosses told me [to] forget it. They'd much rather have hundreds of layoffs than have their members give up a little bit of in this case it would have been a Friday afternoon off, and myself included, getting 35 hours worth of pay versus 40. When they said that, it was just a vivid reminder to me that we needed to change things, not just to balance the budgets, but to make sure that the people we elect as taxpayers to run our schools and our local governments actually have the tools. That they're not handcuffed by, you know, a couple of union leaders who don't want them to be able to do things that are in the best interest of not just the taxpayers, but of their employees.

So this really came out of [a] personal experience at the county level and we knew we had such a crisis to deal with financially at the state, we wanted more than a band-aid or some duct tape. We wanted something that provided long-term solutions and, so far, a decade later it has been.”

When crafting this policy, did you ever imagine it would get the response it did?

“No, we knew there would be some pushback. As I mentioned, at the local level, I knew some of the union bosses weren't open to some of the positive reforms we had to do to protect our workers and our taxpayers at the same time, so I figured there'd be some pushback at the state level.

I knew Democrats, in many cases, wouldn't like it, at least elected Democrats wouldn't like this, but I thought most people, regardless of party, they knew what the choices were. You know, we didn't want to have massive layoffs of tens of thousands of public employees. We didn't want to cut Medicaid by, literally, billions of dollars because that would devastate needy families and seniors, and others. We didn't want to, at the time, when the economy was floundering, we didn't want to include a massive tax increase because we knew that would be like a wet blanket on the state's recovery, and so we came up with what we thought was a pretty viable alternative.

We were able to balance the budget but still provide local governments with the tools they needed not just to balance their budgets, but to better manage the programs they provide and protect services, protect their employees, and we thought it would get a good response overall.

We had no idea that after a few days, the protests would go from hundreds to thousands to tens of thousands, and that national organizations would bus and ship people in, and that's really when it changed. It got much more nasty, much more intense. I think that's probably the time when the 14 Senate Democrats were encouraged to go to Illinois to get out of the state and why it dragged this process on. It's when the national folks got involved. They were playing at a much higher level and I think that only exacerbated the challenges we faced in the state at the time and how ugly things got.” 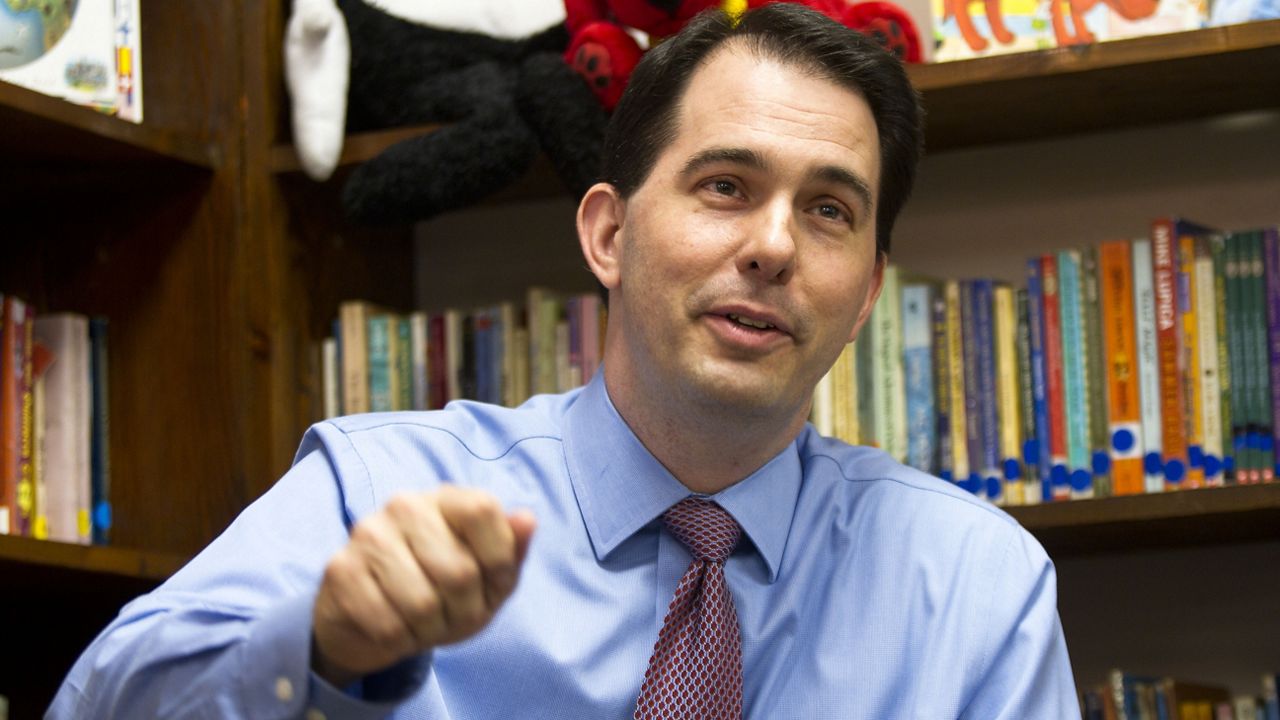 Is there anything you wish you would have done differently?

“Well, I think there's no doubt about it. One of the things I looked at then and I say even more now is I was so eager to fix things. I didn't talk about them I just fixed it. In politics, most people talk about things but never fix them so I guess if I had to error, I'd rather error on the side of fixing as opposed to talking. But what I learned vividly then, and I've tried to do since then, even in my own life, let alone for politics, is to do both. To talk about things, continuously talk about things, communicate not just what you're doing, but more importantly why you're doing it, and then go out and do it, take action.

I think if people early on heard me tell stories of, for example, Megan Sampson—a teacher in Milwaukee, who a year before I was governor, was named the outstanding new English teacher of the year and a few weeks later got a pink slip because she was laid off because, even at that time, legislative Democrats and the governor had cut money from local schools and governments and they, in turn, had to layoff teachers. Why would they lay off someone like her who was deemed one of the best teachers in the state? Well, the union contract said the last hire is the first fire. The last in is the first out.

If I had told people I was going to change that, I think most people, regardless of party, would say 'Yeah, that makes sense. You need to do something about that.' If I had told other equally as compelling stories, which there are many from around the state, I think people would have bought into that sooner. I was just in such a hurry to get working and fixing it, I didn't spend enough time talking about it, so I would say do both.”

Is there a message for your critics all these years later?

“Two things. I'd say one: despite all the accusations at the time about where Act 10 came from, the simple reality is it came from people I worked with at the county level being a local official. When I tried to do the 35-hour work weeks and the unions told me no way, and instead we had to layoff hundreds of workers, I still vividly remember county employees coming into my office, oftentimes with other employees who were young and new and had just started, offering to do 35-hour work weeks just to keep their colleague on the payroll and I had to tell them I couldn't do that because the union contract prevented me from doing that. With tears in their eyes, they knew their colleague didn't have an alternative to not getting a layoff notice. I didn't want to do that and had I had Act 10 as a local official, I could have made that better decision to preserve those jobs.

So one, I'd like people to know that's the reason why I did it. It was because I could see the impact as a local official it had on real people's lives. The other thing I would note, not just to people who were critics but anyone, here we are at Act 10 at 10 years later and even though two years ago a new Democrat took office as governor, and despite the fact his [first] budget was filled with all sorts of things on the liberal wish list, the one thing that was not in there was an outright repeal of Act 10.

That to me is telling, that even though in the end there was plenty of other things in that budget that he knew would never get through the legislature, he didn't even put Act 10 repeal on the table. Why? Because it works and taking it away from the citizens of Wisconsin, taking it away from local governments in Wisconsin would decimate our schools, our towns, our cities, our villages, our counties, and our state government, and so probably the best thing for me to look back at of Act 10 is it works, so much so that even the people who were critics of mine, now in office, understand they can't undo it or they will undo so much of the success we've had at the state and local level."

Wisconsin Gov. Scott Walker talks about the budget bill during an interview in his office at the Capitol in Madison, Wis. on Friday, March 11, 2011. Walker signed the measure into law on Friday, eliminating nearly all collective bargaining rights for public employees. (AP Photo/Morry Gash)

Act 10 defined your career. Are you comfortable with that? How do you feel about it shaping your legacy in so many ways?

“Yeah, I mean I look back to this day, maybe not so much in Madison where it's very, very liberal, but even in Milwaukee, for example, a Democrat community, by and large, there are people who tell me that even though they are Democrats they respect that I said what I was going to do and then went out and did it. They respect that we pushed for big, bold reforms and many of them have to reluctantly admit and acknowledge, as I just alluded to, that they worked.

This wasn't a reaction to some republican playlist. This wasn't something a tank that put this together. This was [a] real-life experience, real people, their jobs and their livelihood, that this came from, and that it's worked overtime and so, to me, if we went through all this and it was gone after 10 years I might feel a bit more frustrated, but the fact that it's still working today is all the credit I need. Not for me personally, but for the good and decent people of Wisconsin who will continue to benefit for hopefully generations to come.”