Wisconsin Bar Has Some Out of This World History

CAMPBELLSPORT, Wis. — 'Tis the season for believing in Christmas magic, and if you’re at Benson’s Hide-A-Way, UFO’s.

“We call ourselves the UFO Headquarters,” said owner Bill Benson.

The bar/restaurant sits on Long Lake in Campbellsport, Wis. It’s about a 30 minute drive from Fond du Lac, and customers come for the food, drinks, and UFO stories from Benson. He’s owned the UFO themed business for 40 years and in that time has collected stories, pictures, and videos from other enthusiasts.

“I share what I have and if they accept it fine, if they don’t, that’s fine too,” said Benson.

A highlight of the Hide-A-Way is a glass jar that Benson proudly shows off. It isn’t pickled eggs but instead what he claims is a small alien, preserved in liquid. It was given to Benson for safe keeping. 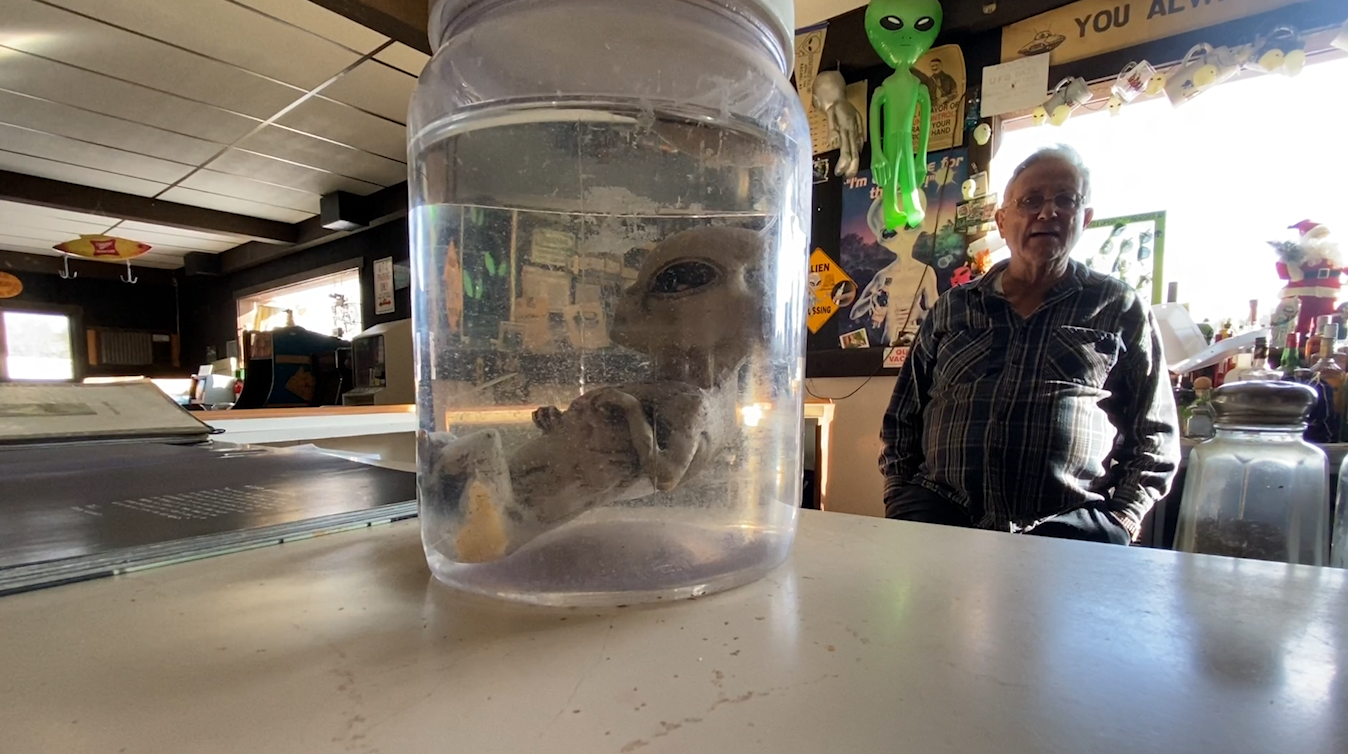 “He said he found it in a cave near Roswell, New Mexico. The government was here, one of the branches, I don’t recall which one it was anymore,” he said. “I had to go and sit down and talk to him about it. It was on a Friday afternoon and I was busy, busy, busy.”

The Hide-A-Way has become a hub for UFO stories in the area.

“We’ve had people from all over the world,” Benson said. “Australia, New Zealand, Germany, Sweden, Britain, South America…quite a few. You have 500-600 people you hear some really good stories.”

Some believe nearby land feature ‘Dundee Mountain’ lies at the center of the strange activity in the area.

“We’ve seen an awful lot of strange lights over there…orbs and so forth,” said Benson.

In the shadow of Dundee Mountain and on the shore of Long Lake, Bill’s heard plenty of UFO stories and fishing stories as well.  He recalled one involving a husband and wife who woke up early to go fishing, then noticed an unusual object in the sky.

“It went down into the water and it went quite a ways north and then it came out of the water and just gone. Long Lake is about two miles long so probably a mile underwater. They decided not to go fishing that morning,” laughed Benson.

UFO’s made some news this year. In April, the Department of Defense authorized the release of three Navy videos with a statement that included: The aerial phenomena observed in the videos remain characterized as “unidentified.”

Recently, comments from the former director of space programs for Israel grabbed attention. He said there is a galactic federation in contact with leaders of the U.S. and Israel but people in general aren’t ready to hear about it.

Benson is a true believer and thinks we are ready.

“I think we’re ready for it. There’s so much talk of it. They haven’t hurt us thus far, why would they start hurting us now?,” said Benson.

For Bill and others like him, it’s always the season for believing.​