CINCINNATI — Gary Lessis fell in love with the sport of pickleball pretty much as soon as he picked up a paddle three years ago while playing with a friend in Madeira, Ohio.

Since then, the now-62-year-old has worked tirelessly to create a larger fan base closer to his home— like, literally across the street. The downtown Cincinnati resident started the Pickleball at Sawyer Point club based out of the picturesque riverfront park of the same name.

Lessis was among 100 pickleball enthusiasts at the park on Sept. 9 to break-in the made-over pickleball complex at Sawyer Point, a former tennis-only facility operated by Cincinnati Parks.


The upgraded facility features 18 dedicated pickleball courts, which is a substantial expansion over the handful of pickleball nets that the city had added over the years to accommodate growing interest in the sport. Three tennis courts remain, but each has pickleball court markings overlaid, for easy conversion into six additional, temporary pickleball courts. That means there’ll be 24 available for special events, such as the Association of Pickleball Professionals tournament next May.

Future plans call for the installation of a webcam system so players can check out the weather in real-time before heading over to play. Parks staff expected to be added as early as next week.

“For the sport and the city, this is an exciting day seeing these new courts in use,” Lessis said.

Building a love of the game from the ground up

Lessis played a key role in securing the funding for the overhaul of the former tennis center.

The court upgrades cost about half-a-million dollars in city capital money and another $72,000 in donations from the pickleball fans through a designated private endowment set up through the Cincinnati Parks Foundation.

Cincinnati Mayor Aftab Pureval, who attended a ribbon-cutting ceremony for the courts, believes the new facility will not only attract new local players, it positions Cincinnati to become the premier pickleball destination in the Midwest.

While Lessis believes the courts are great for current pickleball fans, he also views it as a key tool for continuing the growth of the game.

The sport — which pickleball enthusiast and tech billionaire Bill Gates described in a recent blog post as a “mashup of tennis, badminton and ping-pong” — has surged in popularity over the past few years, becoming one of the fastest-growing sports in the United States.

Cincinnati Parks installed the first four courts at Sawyer Point in spring 2020, and play began May 18 of that year.

Last year, from March 17 to Nov. 28, total attendance more than doubled to 15,834 players, drawing an average of 51.4 players for all 308 group play sessions. The sessions had averaged about 31 players per session the year before.

“It’s tremendous to see this marquee project come to fruition, rejuvenating an under-used amenity and truly creating a destination for pickleball players from all over the region, and the U.S.,” said Jim Goetz, president of the Cincinnati Board of Park Commissioners. “The enthusiasm of the pickleball community in Cincinnati is second-to-none.”

It’s more than a game, it’s a community

While Lessis enjoys playing the sport, the thing that made him fall in love with pickleball was the people playing the game. At many courts, there’s “group play” — where people show up during specific time windows and get paired off based on their level of skill.

For instance, Sawyer Point has group play every day during the seventh-month season. Periods are 8 a.m. until noon every day, and then 5 to 10 p.m. Monday through Friday. 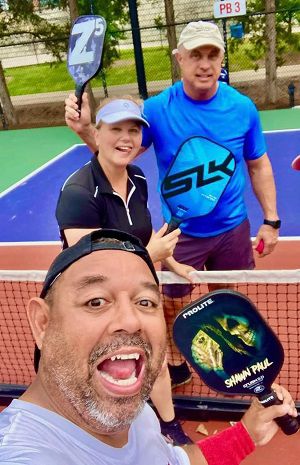 Lori Hogenkamp (back, left) picked up pickleball while stumbling across people playing it while watching through Sawyer Point. (Photo courtesy of Lori Hogenkamp)

“Rather than having to communicate back and forth with three of their friends to determine the date, the time and location for golf or tennis or pickleball with his group play format, you can just show up and start playing,” said Lessis, who played play a game called platform tennis before turning his attention to pickleball.

Beyond pickleball being a social activity, Lessis noted there are few barriers to entry. Paddles and balls cost as little as $50, he said. The Sawyer Point club even offers free loaner paddles and balls for people to use during group play hours.

“It’s really a game anyone can pick up and play right away, but the real draw to the sport is the community aspect,” he added. “It’s truly a game for everyone – from 8 to 80, or older.”

Monday through Friday mornings tend to attract a slightly older crowd, mostly retired or older individuals, according to Lessis. But in the evenings, the courts fill with people in their 20s and 30s.

“It’s great exercise and super social,” said Lori Hogenkamp, 50, who lives on Cincinnati’s east side. “You can be as competitive or as recreational as you please, and there are always more ways to learn and expand your skills and play.”

Hogenkamp discovered the game by accident, while she and a friend were taking a walk through Sawyer Point. She recalled walking past the courts and asking players about the game. “Instead of telling us about it,” she said, “they invited us to grab some paddles and try it.”

Since then, Hogenkamp has become a regular during morning sessions. She feels the pandemic led a lot of people to the sport because it provided a safe, social activity, while many places remained closed.

“Sounds silly, but I deleted all of my games from my phone that I had used during the pandemic and now play pickleball whenever I get bored or need a distraction or pick-me-up from work,” she said.

Hogenkamp described the local pickleball circuit as “her peeps.” One of those is her partner, Barry Frink. The pair didn’t meet because of the sport, but it played an important role in their bonding, she said.

Building a reputation as a major pickleball city

News of the Sawyer Point facility has already generated some national buzz. The complex is the reason the Association of Pickleball Professionals (APP) is moving the Cincinnati Open down near the shores of the Ohio River. 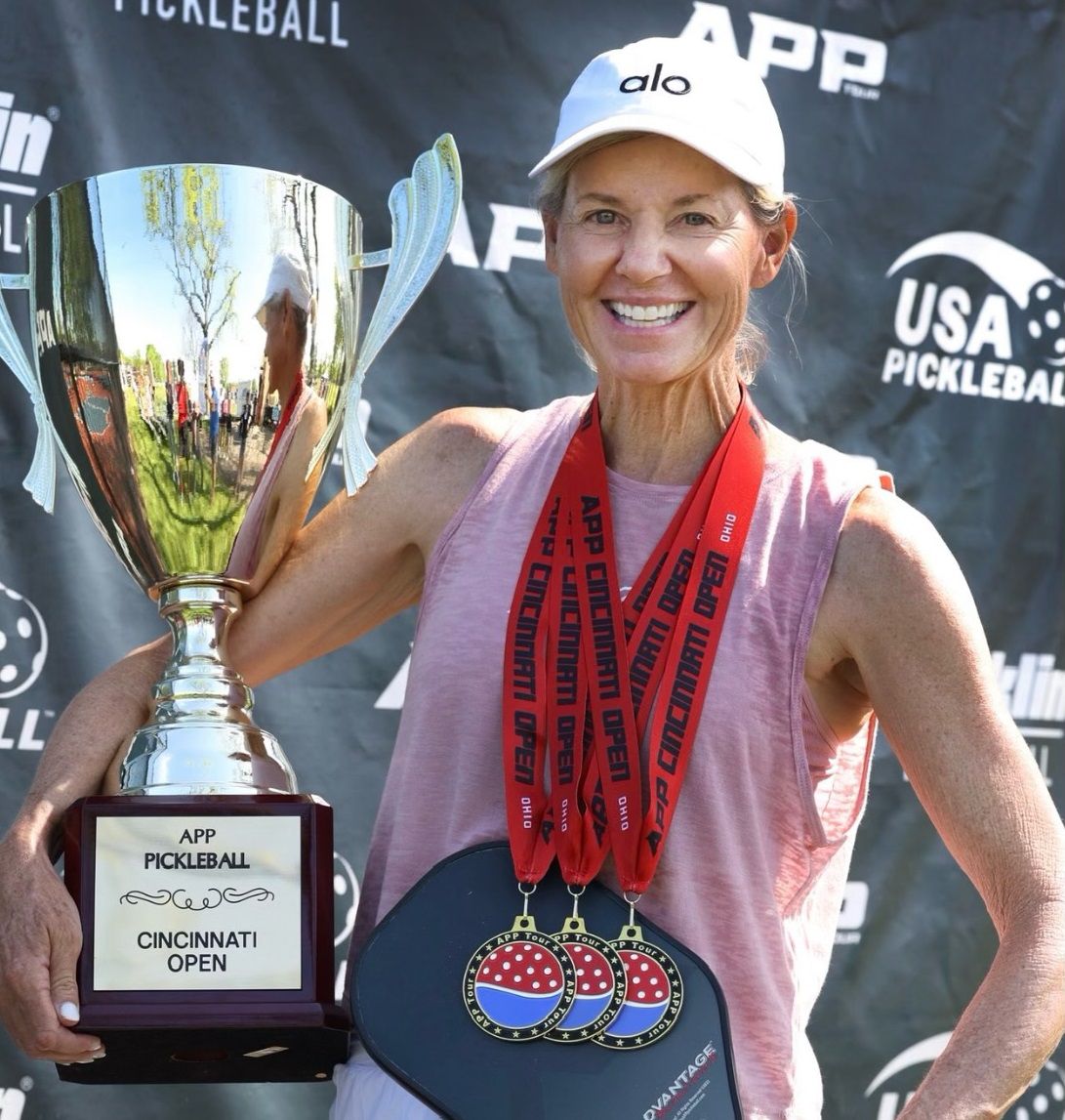 The tournament had taken place at Lefferson Park in Middletown, Ohio, the past few years, but the energy in downtown Cincinnati was too much to look past, said Ken Herrmann, who founded the APP in 2019.

“This investment by the city shows that Cincinnati is serious about pickleball and wants to be front-and-center for its growth,” Herrmann said. “There’s a real passionate fanbase in the region, and it’s pretty clear Cincinnati wants to be a player in this pickleball.”

Greater Ciincinnati is one of more than 30 areas to host APP tournaments, including four international sites.

The 2022 tournament, which took place before the renovation was complete, was a Challenger Series event with a total prize purse of $35,000. Herrmann feels that the new Sawyer Point facility will make it possible for Cincinnati to host future "tier-1" events, where the prizes range from $50,000 to more than $100,000.

The tournament could have an economic impact of about $2 million, according to the Cincinnati USA Convention and Visitors’ Bureau. That figure includes projected spending on hotel stays, shopping, meals and entertainment.

“Cincinnati will be one of our signature tour stops in this part of the country,” Herrmann said.

While Lessis believes the 2023 tournament will be a good thing for the city, he’s most focused on continuing to grow the game he’s come to love.

“It’s just a really exciting time for the city and the sport of pickleball,” he said. “I hope everyone comes down to Sawyer Point and picks up a paddle. After a couple of swings, I know you’ll fall in love with the sport.”