CINCINNATI — Baylor Rowell fell in love with the University of Cincinnati the moment he stepped foot on campus.


The freshman loved the size of the academic lawn, the architecture, the amenities and the sense of life in the surrounding Clifton Heights neighborhood. One thing that really stood out to him above all else, though, was historic Nippert Stadium, home of the UC Bearcats football team.

Since coming to Cincinnati a few weeks ago, he’s already walked by the stadium countless times. He’s sat in the stands between classes and has even played catch with friends down on the synthetic field. 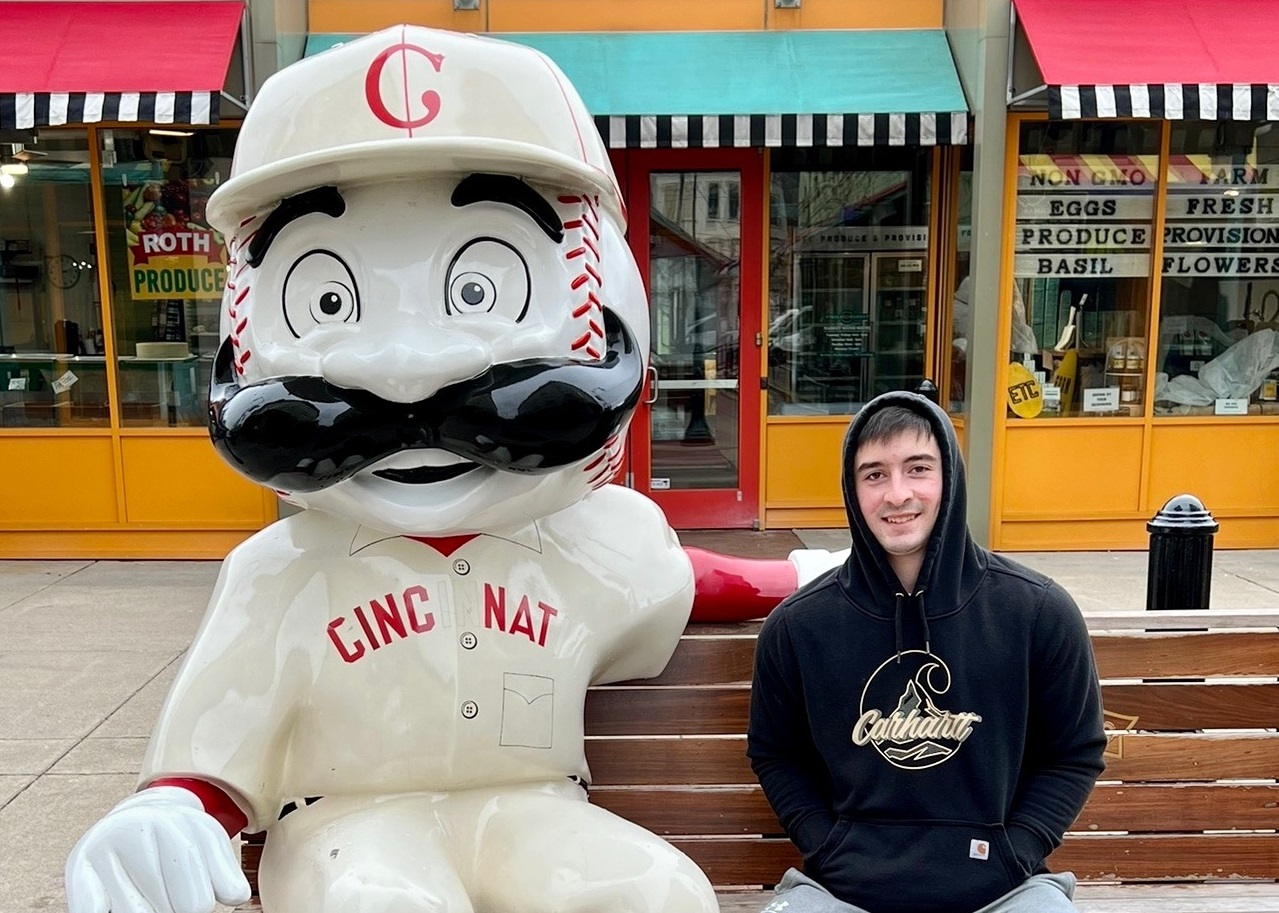 UC freshman Baylor Rowell poses for a picture with a Mr. Redlegs at Findlay Market. (Photo courtesy of Baylor Rowell)

But he doesn’t think any of those experiences will compare to his first football game this Saturday. He’ll be sitting in the student section for the first time with thousands of classmates for the game against Kennesaw State University.

“I’m pumped,” the 19-year-old Chicagoan said. “We’ve had a couple of festivals the last couple of weeks and everyone has been pretty sociable and welcoming, but I think it’s going to feel more like college after we’ve had that first home game.”

For last week’s season-opener against the University of Arkansas, Rowell watched the game on TV with several of his new friends.

Though disappointed by the loss, Rowell feels UC is a young team with a lot of transfers. They “flashed some promise,” he said, “and he’s excited about the next few weeks.”

For Saturday, Rowell and his friends plan to make some walking tacos in the dorm before the game and then head down to the field with some friends he met in class.

“We’re just going to have a good time and cheer on our school,” he said.

It’s more than just a football game at UC

Rowell’s trek to Cincinnati wasn’t an obvious one. The business student has family connections to Ohio through his dad, who lives in Columbus part-time for work, and his sister, who attends the Ohio State University. And he likes UC’s academic offerings, namely the co-op or internship program.

But what attracted him to Cincinnati was, in large part, football.

He loved Nippert’s location in the heart of campus. “It helped me picture myself as a student here, going to games with friends and just having the college experience,” he said.

The recent success of the football team and the chance to have the typical “game day” experience proved to be Rowell's deciding factor between UC and Illinois State University. 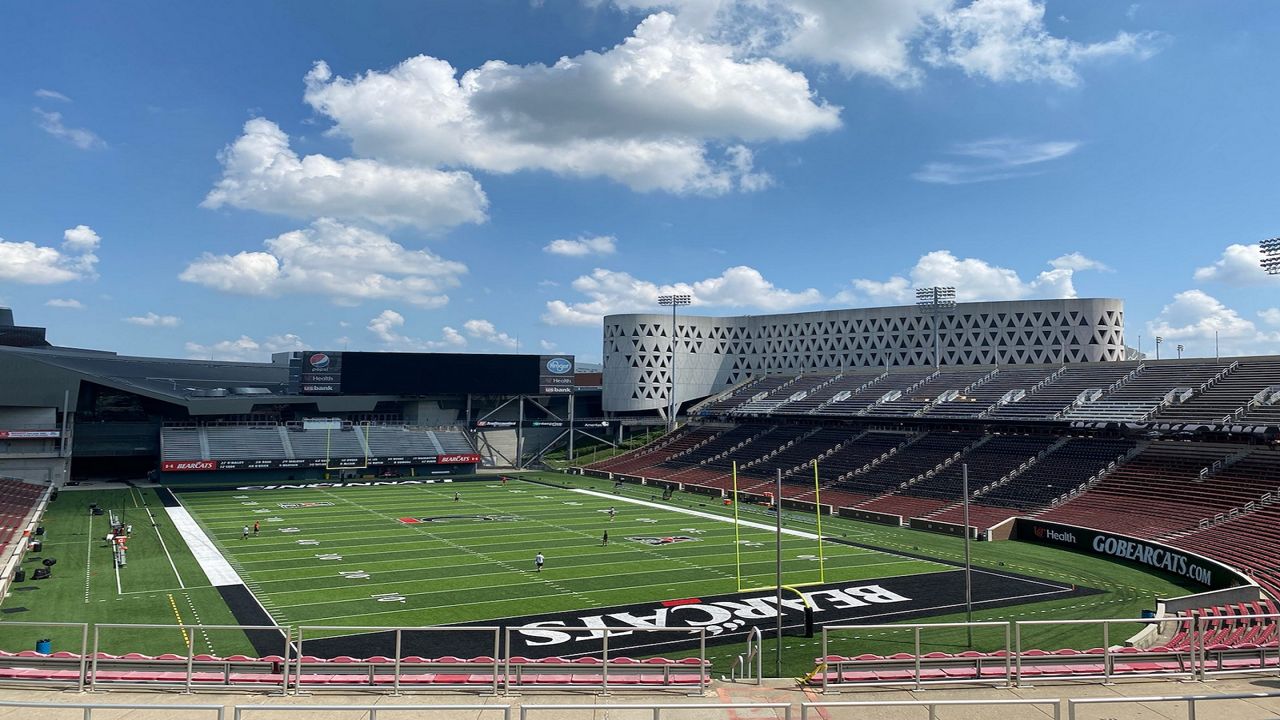 Inside historic Nippert Stadium in the heart of the University of Cincinnati campus. (Casey Weldon/Spectrum News 1)

“I really wanted that energy, because I thought that was pretty important for me to become familiar with my classmates and campus during my freshman year,” he added.

In his two-and-a-half years, Miner’s seen more and more students attracted to the university because of UC football and other elements of campus life.

The success of the team the last few years — including last season’s birth in the College Football Playoff — and the announcement of the team’s upcoming move to the Big 12 Conference have spurred a surge in enrollment.

Attending classes and taking part in academic opportunities is the most important part of college for students, Miner said. But he noted UC’s goal isn’t simply to have students survive their classes and earn a degree.

Like most colleges, UC hosts a Welcome Week every year featuring a variety of events for new and returning students to familiarize themselves with their surroundings. There are social outings to local restaurants and hangouts, chances to sign up from clubs, even a movie night at Nippert Stadium.

The events made it “easy to meet new people,” Rowell said. He’s joined a few clubs so far and is exploring Greek life.

But the start of football season – the atmosphere it creates on campus each fall – is special for all students, Miner said, regardless if they’re a football fan or not.

That’s especially the case for the first home game, he added.

“Even if you are completely here for academics and not at all a football fan, when you walk around campus on Saturday and hear the crowd roar when the team comes onto the field, it makes you feel a sense of school spirit,” Miner said. “Once you experience it, you’ll absolutely be a lifelong Bearcat from that point on.”

A college experience for UC fans near and far

The draw of campus life in-person isn’t reserved for out-of-town students. More and more Cincinnati-area students are choosing to stay close to home to attend UC. That’s largely because of the academics, Miner said, but the extracurriculars and social life play roles as well.

This year, there are more than 7,500 students in residence halls. Normally, that number would be a little over 6,400. That’s due partially to record numbers of local students who want to have a campus experience.

“Students want that experience where they’re going to a football game every Saturday, where they’re getting together and playing intramural sports. It’s the ability to go out for pizza with your friends on a Tuesday night and then go back to the dorms to study,” Miner said. “Students want those experiences they just can’t get living at home or at some other school.” 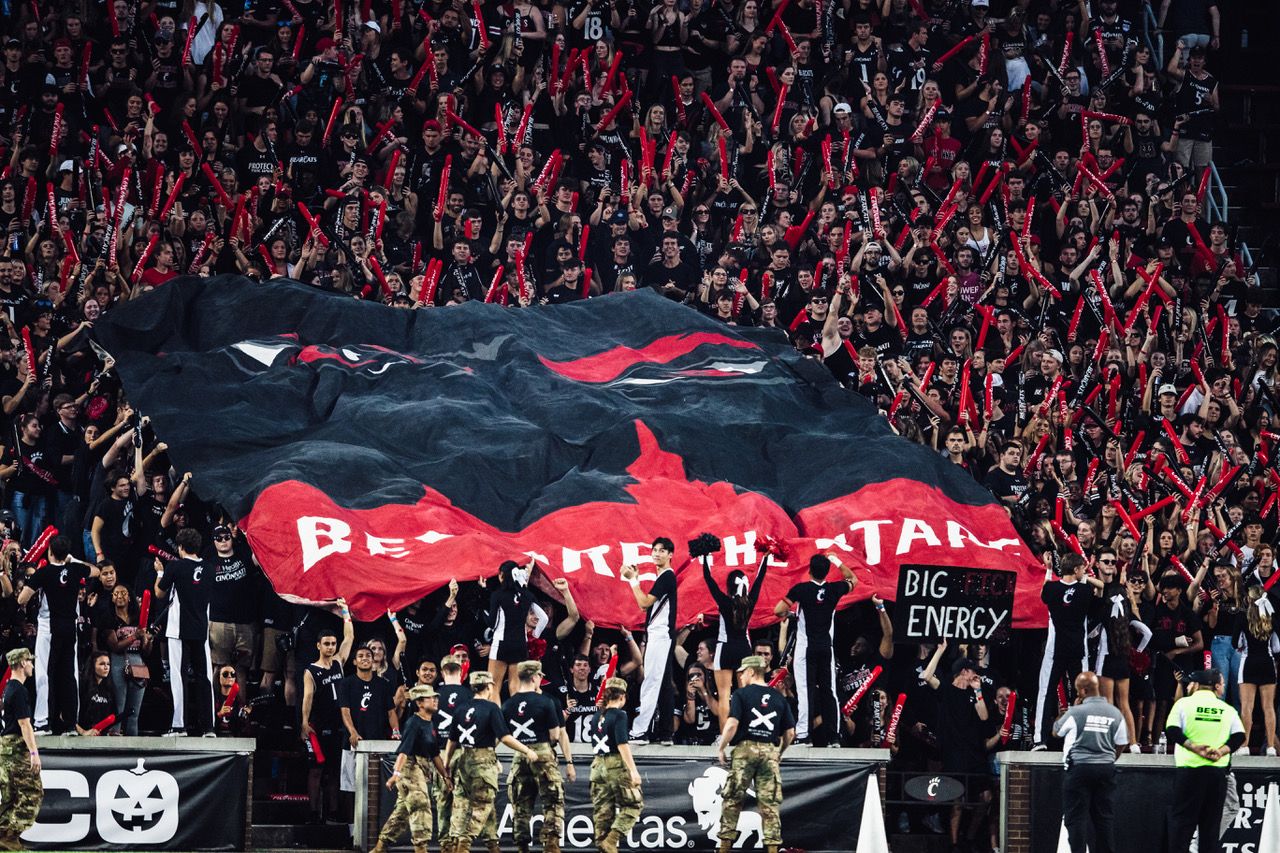 UC fans celebrate in the student section during a football game at Nippert Stadium. (Photo courtesy of University of Cincinnati Athletics)

One of those local students is Matt Brown, a freshman from Anderson Township, a roughly 25-minute drive from his dorm on UC’s main campus. Football didn’t play a huge role in his college choice, he said. The business student wanted to be close to home, and he described his program as second-to-none.

But having a fun team to watch on Saturday afternoons is “the cherry on top.”

“It definitely adds a lot to the experience as a freshman,” said Brown, who attended last year’s Cotton Bowl game between UC and Alabama.

“UC’s football team being as good as they are definitely just makes the whole experience 100 times better and a lot more fun,” he added. “There’s definitely a lot of pride on campus right now.”

Brown noted that talking about the team or expectations for the season is an easy way to strike up conversation and meet new people. That’s how he met Rowell.

For Saturday, Brown plans to tailgate with some family and local friends before going to go to the game. He’s been to Nippert Stadium countless times as a fan, but Saturday is going to be different because it’s his first time there as a student.

“It definitely feels like a special time to be at UC,” he said.