AKRON, Ohio — More than a century after one of the greatest tragedies in the history of U.S. labor, Akron Metal Etching has been selected to help craft the featured design elements for a permanent artistic memorial being built to honor the victims of the Triangle Shirtwaist Factory fire.

Underway at the site of the tragedy, the Brown Building in lower Manhattan, the nine-story Triangle fire memorial is titled “Reframing the Sky.” It was commissioned by the Remember the Triangle Fire Coalition, which works to keep the broader community connected with the Triangle Shirtwaist Factory Fire.

Akron Metal Etching has been headquartered in Akron since 1961, and specializes in creative texturing of molds for rubber, plastics and the die-casting industries.

The tragedy drew widespread attention to the unsafe conditions many U.S. workers faced, and led to landmark legislation to protect workers. A plaque was installed on the Brown Building by the International Ladies' Garment Workers Union, organized in 1900, which pushed for the worker safety laws.

For the Triangle fire memorial, Akron Metal Etching is working with KC Fabrications, a company it has partnered with on other high-profile projects, including elements of the National September 11 Memorial, Eisinger said.

The memorial is designed by Richard Joon Yoo and Uri Wegman, who won an international competition for their design in 2012, beating out nearly 180 competitors, the Triangle Fire Coalition said.

The Triangle Factory fire broke out March 25, 1911, on the eighth, ninth and 10th floors of the building. The blaze killed 146 garment workers, mostly teenage girls and young women who had no way out of the building because of the building’s broken elevators, lack of sprinkler systems and a rickety, narrow fire escape, according to historic records.

Many of the workers leapt from the building, while hundreds of New Yorkers watched in horror from the sidewalk below, unable to help. The victims died within 18 minutes of the fire breaking out, according to historic accounts.

The memorial design is based on the mourning ribbons that were once draped on buildings as symbols of grief. It features a 300-foot-long textured stainless-steel ribbon etched by Akron Metal Etching that will begin at the corner of the ninth floor, and descend down to the street. 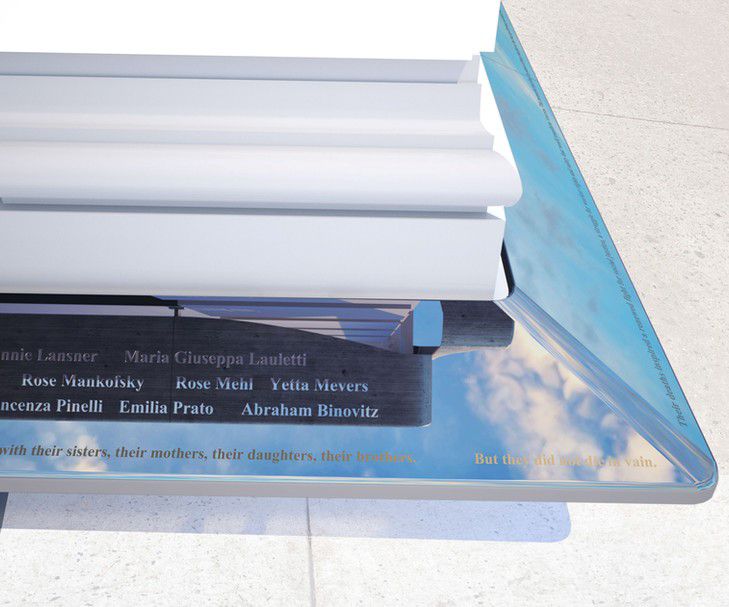 Through a darkened reflective panel at street level, visitors will be able to see the victims’ names in the reflective panel, as though overhead, written in the sky. (Photo courtesy of the Triangle Factory Fire Coalition)

The memorial requires Akron Metal Etching to seamlessly etch a unique design into the length of the ribbon, created from patterns and textures of hundreds of pieces of fabric donated by the victims' family members and community members, the coalition said. The participants, whose stories will be archived at the Kheel Center at Cornell University, sewed the fabric together into a series of 10-foot panels.

“We know what we're up against in doing these things, there's so many patterns,” Eisinger said. “And there's so many arrays, so much detail that you want it all to come out right. So we've had to come up with some different techniques in order to get these images just the way we wanted them.”

Those techniques include a blend of modern printing and photography, and an old-time method of etching using photo engraving, he said. The patterns are transferred to film, printed out, and then etched into the steel, he said. 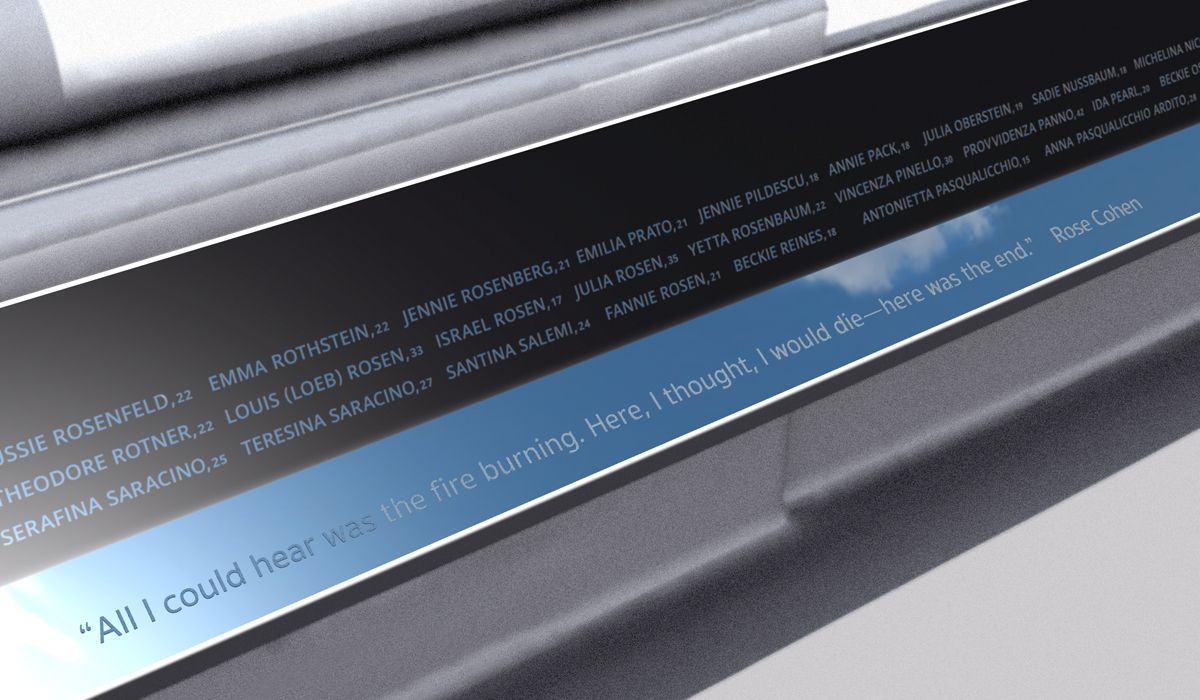 The names of the victims and comments from eye witnesses will be engraved into the steel. (Photo courtesy of the Triangle Factory Fire Coalition)

The approximately 30-inch-wide ribbon will separate at the top of the ground floor 12 feet above the sidewalk to run the length of the building's façade on two sides. The names of each victim will be engraved into the ribbon.

Through a darkened reflective panel at street level, visitors will be able to see the victims’ names in the reflective panel, as though overhead, written in the sky, the coalition said

“We've found it very interesting, but also really moving,” Eisinger said. “I mean, when you're looking at some of these panels, and we'd see the names, you know, here's a mother and two daughters, and they have their ages.”

The reflective panel will also be etched with comments by survivors and eye witnesses as a single line of text running along the lower edge of the panel, drawing visitors’ eyes to the reflection to see the victims’ names.

“There's so much detail on it,” Eisinger said. “When the light hits these at certain angles, it will really be unique images and you'll see the shadows and all the details that are in there. You may not see them all, probably never will see them all, but the point is that they're there. And so, for us, it's an interesting job, that's for sure.”

An interactive names map on the Remember the Triangle Fire Coalition’s website offers users what information is available for each victim. The Triangle Fire Open Archive seeks personal contributions from people that reflect why the event should be remembered.

The memorial is planned to be completed in 2023. To learn more about the project, visit the coalition’s website. 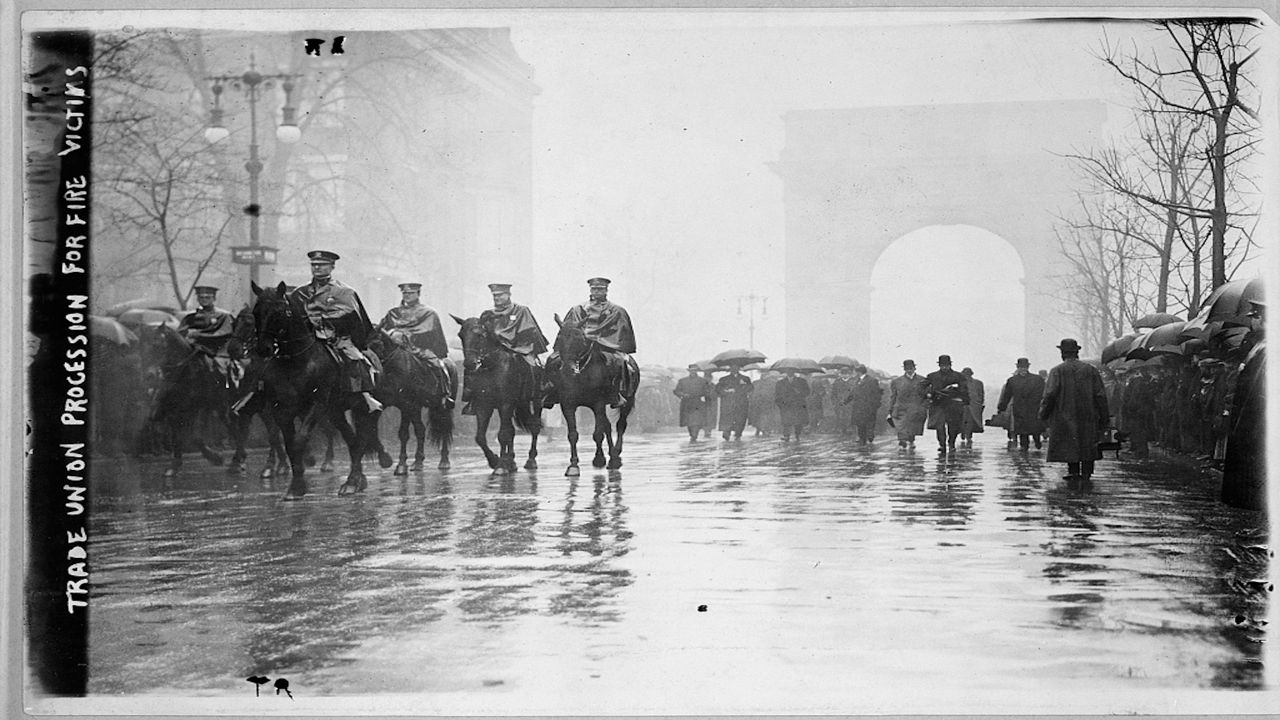 Trade union procession for the Triangle Factory fire victims near the arch at Washington Square. (Photo courtesy of Library of Congress)