CINCINNATI — A new technology conference aims to showcase Cincinnati as a center of creativity both in innovation and the arts.


On Wednesday, leaders from the art, technology, government and financial sectors gathered at the Art Academy of Cincinnati to announce the launch of MidwestCon, which takes place Aug. 12-14 at Art Academy.

Adults require a ticket. Entry is free for kids 16 and younger.

The three-day conference will highlight how emerging technologies are elevating the fields of art and culture. They also emphasize how Cincinnati can be, and in some ways already is, a leader in those sectors. 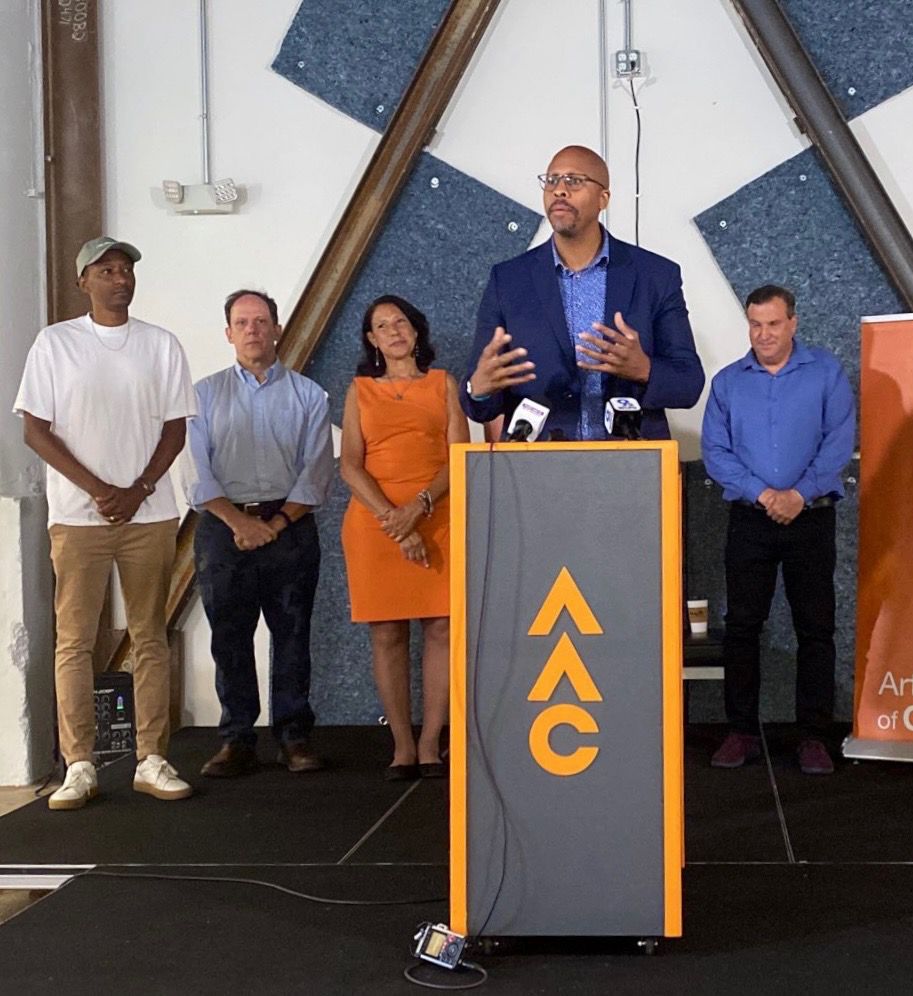 Rob Richardson, founder of DisruptArt, announces the debut of MidwestCon, an art and tech conference in Cincinnati. (Casey Weldon/Spectrum News 1)

Richardson is the CEO of DisruptArt, an organization focused on the promotion of NFTs and the artists who create them. Their mission is to provide an “interactive space for artists, collectors and activists to revolutionize the impact of art.”

This emerging tech is “reshaping the global economy,” Richardson said. It can also help the Cincinnati region grow into a key hub in those spaces.

Cincinnati resident Nick Fontova, CMO for the NFT community House of First, noted how hard it is to sell art. He called out barriers like knowing the right gallery dealer or living in the right city.

But believes NFT technology has opened the world to artists and art collectors in Cincinnati. "It's leveled the playing field," he said.

He hopes MidwestCon helps local artists monetize their work and teaches local collectors how to expand their collections.

Richardson feels there are a lot of innovators in the tech and creative spaces in Cincinnati. Several of the top content creators and collectors were mentioned during Wednesday’s press conference, such as photographer Isaac Wright, also known as “Drift,” from Cincinnati’s Price Hill neighborhood.

However, many people aren’t yet familiar with the technology, including NFTs.

For clarity, an NFT is a digital version of a real-world object, like a piece of art, music or video. People buy them and sell them online. NFTs typically come with a special code — “or a unique thumbprint,” Richardson said — that makes them unique.

Richardson admitted that there’s still a lot of confusion out there about what they actually are and how they work. He also noted there are a lot of people afraid of being “scammed.”

Because of this knowledge gap, the conference plans to dedicate a huge part of its first day to education. Participants can take classes, attend information sessions, or even try out new technology, such as augmented reality headsets.

“It’s very important for people to have the foundational blocks — they understand what this space is, why it has value and how to enter into the space,” he said.

The rest of the three days call for a mix of events, ranging from panel discussions to “immersive displays,” including musical performances and a fashion show to teach artists and other creatives how they can use technology to enhance their work and then convert it into an NFT.

Richardson said there’d be plenty of time for networking and other events as well.

Vice Mayor Jan-Michele Lemon Kearney sat down with Richardson last year to talk about the conference. He was throwing words around — blockchain, Web3, NFTs. She admitted to not knowing what he was talking about at the time.

But what she understood was these emerging technologies represent a $100 billion industry, Lemon Kearney said.

That’s part of the reason Cincinnati is hosting events like MidwestCon and Black Tech Week, which took place last month in Cincinnati.

The home base for the inaugural MidwestCon is The Art Academy of Cincinnati.

One of the primary spaces is the academy’s Site 1212 engagement space.

On the surface, an arts college might not be the most obvious first choice to host a tech conference, Girandola admitted.

The institution, which has roots dating back to the mid-19th century, has spent decades teaching students traditional fine arts, like painting, sculpture, even photography.

But innovations in technology are opening new doors for his students to not only explore their creativity but also to capitalize on their talent.

As we move forward with new digital technologies, of course, creativity will not sleep,” he added. “Art Academy of Cincinnati and our students will be required to lead the transformation of how creatives transform and inspire the future.”

The idea of combining art and technology makes perfect sense to Pete Blackshaw, CEO of Cincinnati’s startup incubator, Cintrifuse. That’s because they both center on two key ideas: creating something new and pushing boundaries.

During a recent event at Cintrifuse’s home base, Union Hall in Over-the-Rhine, several Cincinnati-based organizations presented ways they were already using these emerging technologies to support the arts.

The Children’s Theater of Cincinnati used an augmented reality headset to give patrons a virtual walkthrough of their new theater space, which is still under construction. The organization uses the tool to fundraise for the project.

The artists get 70% of the sales, while the other 30% goes to scholarship money and cryptocurrency research at UC, Weiss said.

At the next table, ArtsWave demoed a Pokémon GO-like video game that they hope can make museum exhibits and art installations more engaging.

“Our goal is to make the arts come alive in Cincinnati,” said Jeni Barton, the game’s creator. “And we can sort of do that literally with these advancements in technology.”

While on a recent trip to Los Angeles, Blackshaw made notes about what Cincinnati needs to do and emulate to mirror success taking place there and across the country.

While he noted Cincinnati is already doing many things well, Blackshaw feels the region could “win in the metaverse,” if it better tapped into its competitive advantage: the local arts community.

“The opportunity is huge and we need to seize it,” Blackshaw said.