Adam Koehler donated a cryptocurrency mining ring to the University of Cincinnati to help raise money for the SCPA Fund.

CINCINNATI — Adam Koehler was a creative kid growing up. He loved arts and science and the idea of creating things.


​But life wasn’t always easy for him as a “not-rich kid in Price Hill.” He didn’t want to go into specifics, but he said growing up in the neighborhood was a challenge at times, especially early in life.

Koehler credits his time at the School of Creative and Performing Arts with developing him into the man he is today.

SCPA is a kindergarten-through-high school public arts school in downtown Cincinnati. Koehler transferred there in fifth grade and went there through graduation.

The School of Creative and Performing Arts in downtown Cincinnati. (Provided)

It was at SCPA where Koehler received the “support and opportunities” to become a thriving student. He went on to graduate with degrees in both marketing and computer animation. He parlayed those academic skills into the confidence needed to find success in his professional life.

Now, he is using his love of technology and cryptocurrency to benefit students at the University of Cincinnati and SCPA.

Koehler is donating one of his crypto mining rigs to UC, for a student-led study project. Students will repair the rig then use it to mine for Ether, the second-largest cryptocurrency in the market size behind Bitcoin.

All proceeds will go to the SCPA Fund. Koehler is a board member.

The rigs take a fair amount of electricity to run, but should net $10 to $12 a day. That money will go toward their annual fundraising efforts. His goal is to use this rig, and potentially future rigs, to raise at least $30,000 for his alma mater.

“This is a true Cincinnati collaboration,” Summe-Haas added. “It’s people finding unique ways to ensure that our students have the opportunities to succeed.”

Developing a love for crypto

After graduating from SCPA in 1995, Koehler went on to study marketing. He used his new skills to develop key professional relationships. That’s how he met the team with which he helped co-found Dotloop, a real estate-centered startup that automated and digitized various elements of the homebuying process. 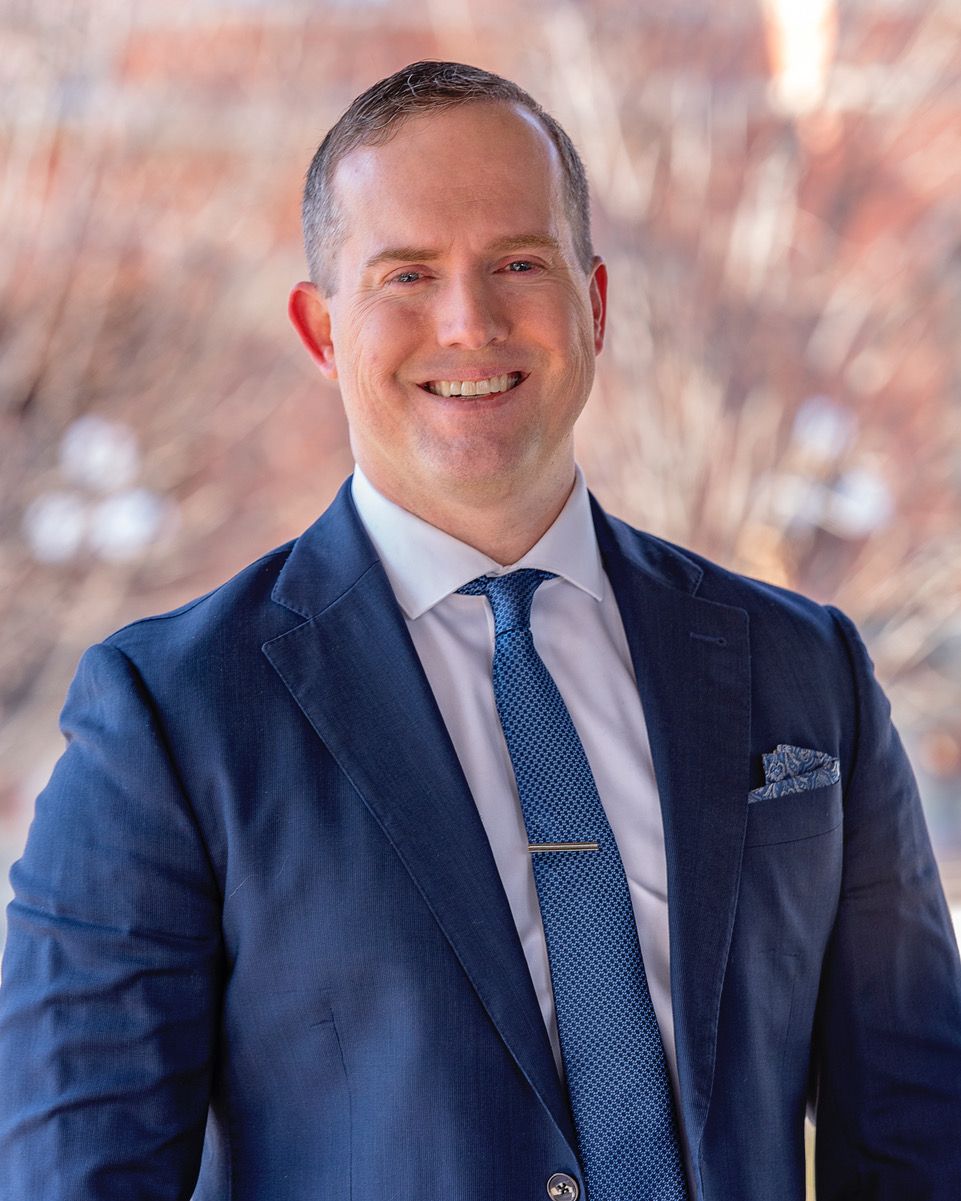 Koehler called his financial advisor and they made a plan to put most of it in what he called “safe stuff” – stocks, bonds and traditional investment accounts. He also asked his broker about Bitcoin.

Bitcoin is a type of cryptocurrency, a system that allows for secure payments online through virtual “tokens” represented by internal ledger entries.

Investors can purchase cryptocurrency through exchanges, like Coinbase or Cash app, or they can mine them. No one is digging through the Earth to find them, though. They use computers, or rigs, connected to the Internet to find currencies by solving complex formulas. Investors can then sell it or trade it in for more traditional forms of money.

Like a traditional stock, cryptocurrencies and others can be risky and speculative, and prices can change quickly.

Back in 2015, the price per unit of Bitcoin was $400, Koehler said. “Oh no, you don't want to invest in that. It's too volatile. It's too risky. It's not really gonna go anywhere. You don't want to do it,” Koehler recalled his advisor saying.

Koehler invested anyway after talking with friends in the tech community. He thought it was a good idea so he put in “a little bit of money.” He sold those first few coins at $900.

“That was my first exposure to it and I was hooked,” he said.

Today, Koehler is a tech entrepreneur with a passion for innovation. He owns CovWorx, a collaborative coworking space in the heart of downtown Covington, Kentucky. There, dozens of creatives work to develop and perfect their startup projects.

Crypto and a cup of coffee

Koehler came up with the idea for donating the rig after a discussion with Michael Jones, an economics professor at the University of Cincinnati.

Jones teaches a cryptocurrency class for undergraduate honors students. As part of the coursework, students must complete an experiential learning project, ideally one that has a community impact.

One of Jones’ former students, who now works in cryptocurrency space, introduced him to Koehler. Like many ideas, the SCPA plan was made over coffee.

“Adam mentioned to me that he had a crypto mining rig that was no longer working and he thought it would be a pretty neat project if some of the students could get some experience seeing if they could get it back up and mining cryptocurrency again,” Jones recalled. “I knew Adam worked with SCPA and we just started to have a conversation about different models for nonprofit funding and we thought it’d be pretty neat to send over whatever we mine to SCPA.”

Jones said the project is an example of the kind of work performed by the Kautz-Uible Economics Institute, which creates unique learning opportunities to help CPS students and benefit the community, Jones said. Koehler is an industry fellow there.

A computer that mines money?

By just looking at it, a person wouldn’t think the rig is anything special, certainly not capable of churning out thousands of dollars a year.

It’s a plain case with metal bars that hold in eight GPUs, or graphics cards, like the kind found in a computer used for video gaming. It has a few basic computer components — a CPU, a motherboard and RAM.

Koehler made the decision to donate the rig because it’s not working. It’s an older model GPU rig. The issue appears to be one of the graphics cards, which could be an easy fix, but Koehler just doesn't have time to fix it. 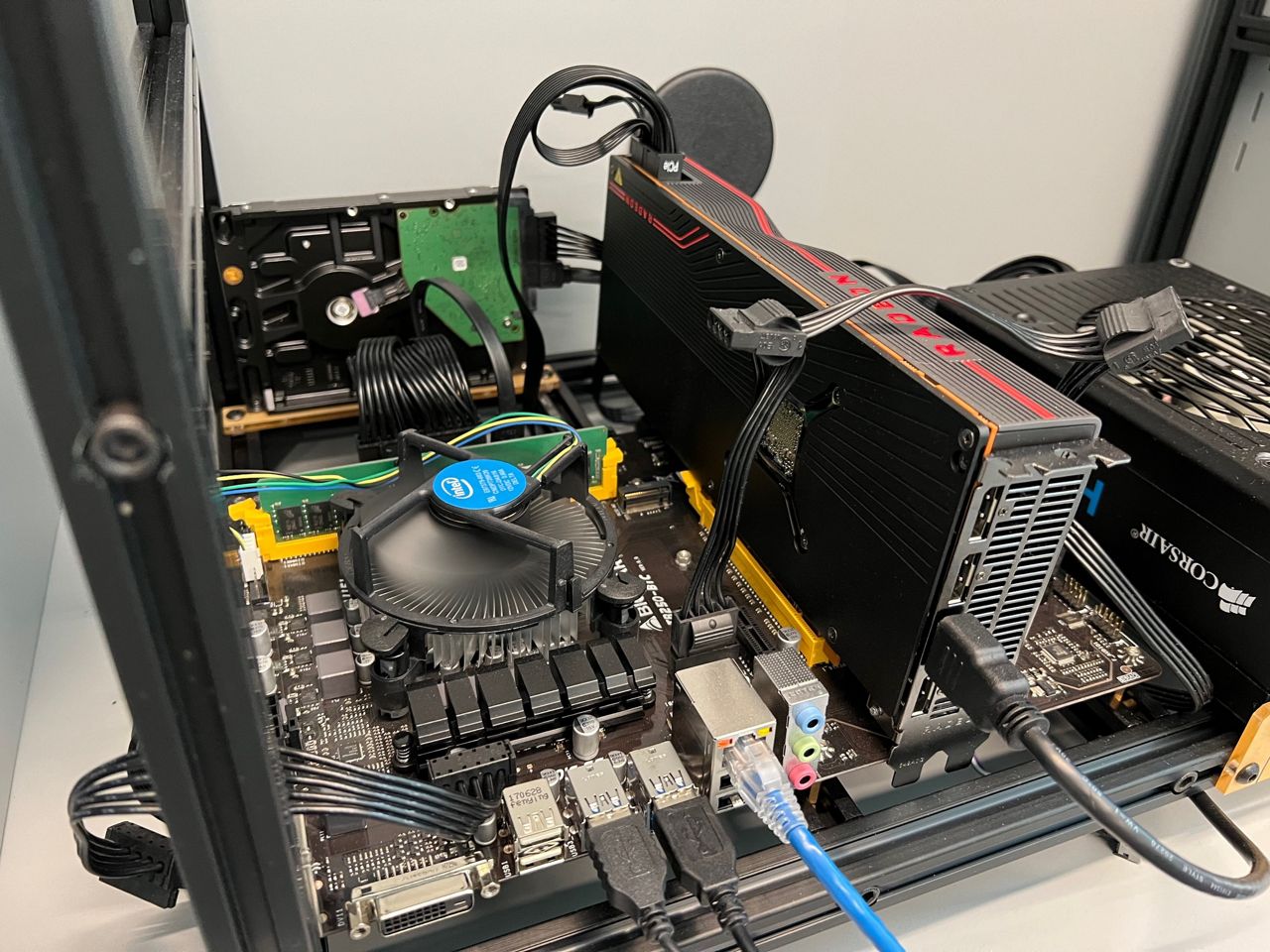 A look inside the crypto mining rig donated by Adam Koehler.

“I thought this would be a great project for someone, so I asked Dr. Jones, ‘Why don't you guys take this rig, get your engineering students to figure out what's wrong with it and get it up and running?’ I'm willing to donate it to the school, if you’re willing to put anything you mine into a crypto wallet for (SCPA).”

The student taking the lead on the project is Noah Csendes. He called the opportunity to work on this project “invaluable” because it’s giving him a chance to apply what he’s learning in the classroom to solve problems in the real world.

What makes the mining equipment do its job is a special algorithm, installed through a basic USB drive, for mining a particular cryptocurrency, in this case Ether. The machine has to solve a complex math problem to “mine” a token.

“In order to make money, your computer has to have enough processing power to find those transactions as they come in to solve a mathematical problem (cryptographic problem) the computer asks in order to validate that transaction. If it does, you get rewarded with a tiny bit of whatever that cryptocurrency is that you're mining,” Koehler said.

There are millions of rigs and computers connected to systems fighting for this power. And all of those computers are competing over transactions every second.

“Your individual mining rig doesn’t have that much power. So, what we're trying to do is connect to a mining pool, which essentially connects you to a bunch of mining power from other people’s rigs. Together, you’re able to win transactions and start making money,” Koehler added.

In most instances, cryptocurrency cannot be spent like traditional money. UC will convert the money into traditional dollars for a small remittance payment before donating them to SCPA.

Students should have the rig up and running by December. At that point, they’ll present their findings to Jones and develop next steps.

UC is launching a crypto economics lab next fall. The mining rig project is an example of the type of work that will happen in the university’s new Digital Futures building. In fact, they’ll move the rig over there when the building is ready.

That lab will be a multidisciplinary research facility, focusing on various subjects ranging from cybersecurity to drones. One thing they’ll be working on is finding ways to make crypto mining more energy efficient. 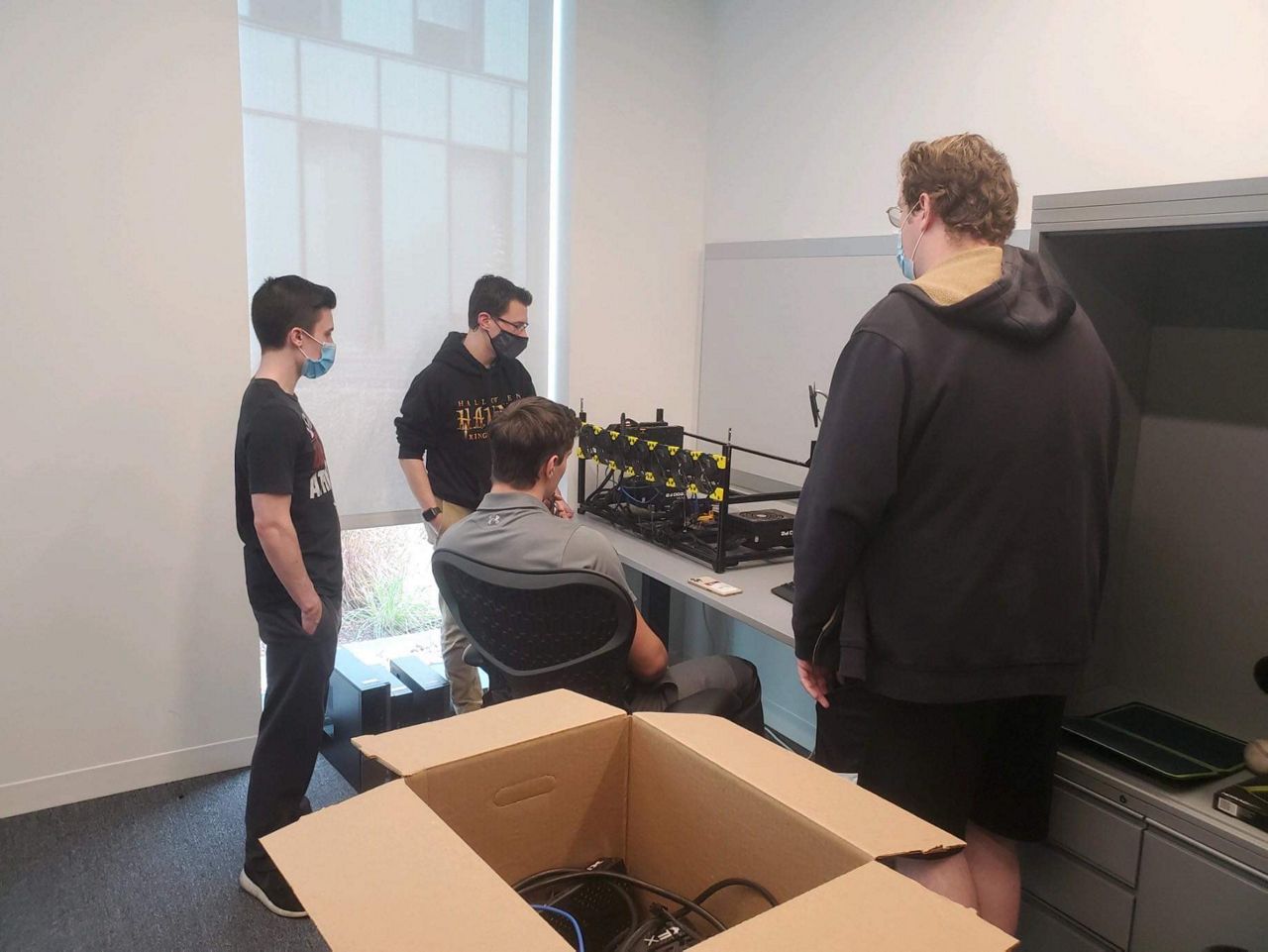 University of Cincinnati students looking at their new project.

"There are active ongoing research projects to explore how to get those energy costs down,” he said. “In addition to just doing the process of mining the cryptocurrency, we will work with students to better understand how to make these things more sustainable."

Jones added that because sustainability is important to UC, the electricity used for this rig will be “offset so that the operations are carbon-neutral.”

Jones said the plan is to invite students from SCPA and other Cincinnati Public Schools schools to the lab to show them how the rig works and teach them more about crypto.

Koehler said that’s a good thing as he sees “jobs of the future” being related to crypto. He would love to see cryptocurrency and crypto technology be taught in schools. Beyond being a “job of the future,” he sees them as having a practical utility related to technology and finances.

He cited new legislation signed earlier this month by Gov. Mike DeWine that requires students entering ninth grade on or after January 2022 to pass a financial literacy program as an elective or math class.

All students attending public school in the state must take one half-credit course or a minimum of 60 credit hours in financial literacy. Lessons will focus on taxes, interest rates, loans and more. Jones would like to see that "more" be crypto.

"How cool would it be if cryptocurrency was a part of that and we had those students, not just CPS students, but any student, to show them how it works?" he said.

They’ll also talk about security issues, such as how to transfer funds or hold it safely to avoid theft.

A new model of giving and fundraising

Koehler isn't sure how much the mining rig will produce as the price on Ether is fluid and it’s not clear how much it will cost to repair the rig. Regardless, he’s not looking at this as a one-time investment.

He said any proceeds raised by the rig will continue to be given to SCPA as long as the rig remains profitable.

Eventually, the hardware in a rig becomes obsolete and commodity prices change. At some point, they're no longer profitable because the cost to run them exceeds the benefits. Though once the card is fixed, the rig could be a proverbial gold mine for SCPA for years to come.

Both Jones and Koehler said one thing this relationship has taught them is there's a potential to "scale up" the program if future donors wanted to do something similar.

Jones said he sees crypto as an enticing model for nonprofit fundraising because it's an investment that will continue to produce beyond the initial investment.

“If you're a donor, you could make a one-time contribution or you could spend the money you plan to donate on a crypto mining rig and continue to make money year after year as long as it remains online and profitable," Jones said.

Koehler said he just wants to help other “not rich kids” from Price Hill get the opportunities they deserve.

Those who are interested in learning more about providing funds directly to SCPA Fund, can do so at scpa.cps-k12.org/donate/scpa-fund