The City of Cincinnati will take part in a year-long update process for the Green Cincinnati Plan. (Casey Weldon/Spectrum News 1)

CINCINNATI – Many people nowadays agree that climate change is a serious problem requiring immediate action, even if they can’t agree on the exact cause or strategy to combat it. Sophie Revis views that common ground as a sign of progress.


​People talked little about climate change and sustainability while Revis was growing up in Cincinnati’s Pleasant Ridge neighborhood. When they did, they often deemed those comments political and part of a “liberal agenda,” she added.

Revis, 27, said attitudes have changed. People are now embracing environmentalism and thinking about climate change in their everyday life choices. 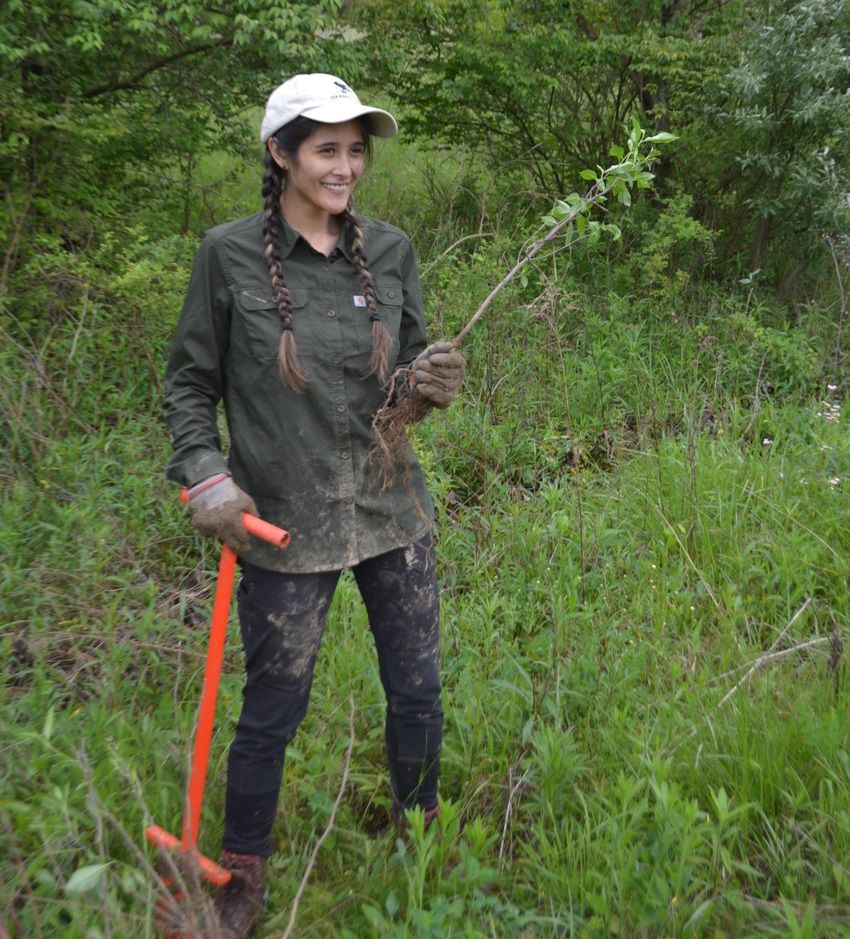 Those choices can include small efforts like reducing the amount of plastic used or taking a bus instead of driving a car, she said. Sometimes, it may mean growing their own food.

“People are becoming much more aware and taking a lot more action than they were,” Revis said. “Especially in the last few years, people are much more concerned about racial justice and how environmental justice is a big part of that.”

Groundwork is one of several groups working closely with the City of Cincinnati as it updates the Green Cincinnati Plan.

The plan helps city officials consider ecological impacts when deciding on everything from new housing developments to budget priorities. It contains a list of goals and recommendations for improving the climate resiliency of neighborhoods and improving overall environmental quality in Cincinnati.

Cincinnati may have to get “more ambitious” with its goals in the plan update, said Michael Forrester, director of the city’s Office of Environment and Sustainability.

A recent report by the Intergovernmental Panel on Climate Change concluded that despite efforts to reduce carbon emissions over the past decade, those numbers have actually increased since 2010 “across all major sectors globally” because of human activity.

The IPCC report shows the world needs to “go bigger and we need to go faster,” Forrester said. “It doesn’t mean that we’re doomed, but it requires action. And that really is what the Green Cincinnati Plan is — it’s our plan of action.”

First created in 2008, the Green Cincinnati Plan historically gets updated every five years to accommodate the city’s changing needs and incorporate the latest scientific data. 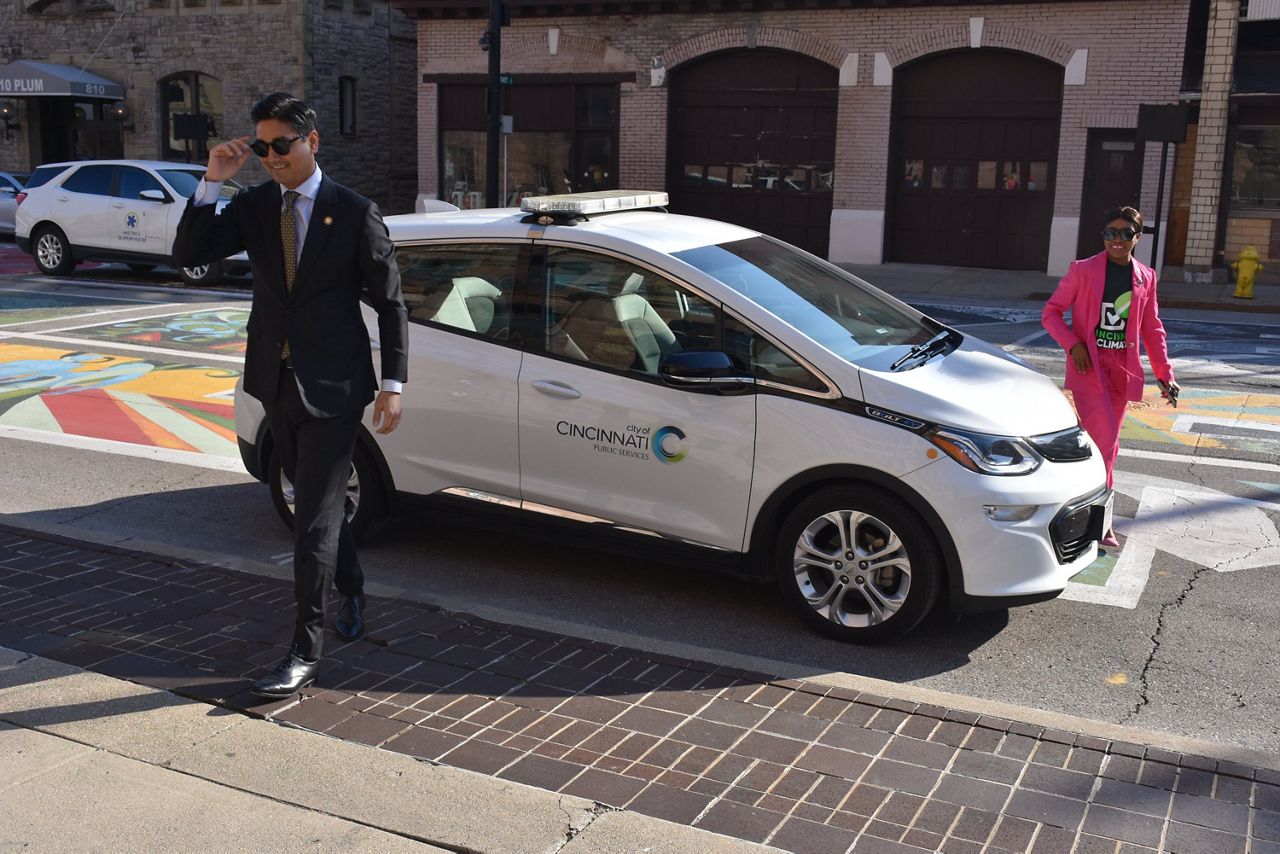 Mayor Aftab Pureval and City Council member Meeka Owens arrive at City Hall in one of the City of Cincinnati's all-electric vehicles. Pureval and Owens were there to announce the kick off of the Green Cincinnati Plan update process. (Casey Weldon/Spectrum News 1)

A major focus of the plan’s update is equity. That means ensuring people of differing backgrounds receive fair treatment and that resources go to those who need them most.

“We all walk on the same earth and live under the same sky, but climate change does not impact us all the same,” said City Council member Meeka Owens. “We know neighborhoods that are most negatively impacted by climate change tend to be those that are in Black and Brown communities and low-income residents.”

During the next year, the city will work with partners like Groundwork, Green Umbrella and dozens of other agencies and residents to craft the update with equity in mind. The first major event will likely take place in early summer.

Owens referred to the update process as an “opportunity,” calling it a chance to create more walkable communities, invest in urban agriculture, enhance the tree canopy in neighborhoods and create more sustainable housing development.

“And through the Green Cincinnati Plan process, we can ensure it’s done in an equitable way,” she added.

During the last five years, Cincinnati has funded a massive solar energy array being constructed on former farmland about 45 miles east of downtown Cincinnati. Also, the plan led to the creation of the Cincinnati 2030 District, which got area building owners to commit to cutting their carbon emissions by 30% by 2030.

Because of the Green Cincinnati Plan and other strategies, Cincinnati has seen a 37.8% reduction in carbon emissions since 2006, according to city statistics. More than 20,000 tons of local recyclable material get diverted from the landfill every year.

Although many people view climate change as a global phenomenon, its impact affects local taxpayers.

One of the major impacts is a dramatic increase in rainfall every year. Over the past 10 years, there have been nine 100-year rainstorm events Forrester said, adding that Cincinnati has spent more than $150 million in addressing basement flooding and hill slide issues related to excessive rainfall in recent years.

“Those are vulnerabilities that will be exacerbated by climate change,” Forrester said. “And we know a lot of these vulnerable neighborhoods are Black and Brown or our low-income communities.”

Data shows neighborhoods with less green space often get hotter than others. More heat means higher utility bills and extended exposure can lead to ailments like heart and breathing troubles.

Cincinnati’s “urban heat island neighborhoods” — those with a lot of impermeable surfaces like parking lots and large buildings — can get up to 12 degrees warmer than those with more tree canopies and green spaces.

“These things are affecting our neighbors, friends and family,” Revis said. “We’re focused on bringing the environmental movement to communities that have been left out.”

City officials will host a series of meetings throughout the summer and early fall to solicit input from residents and community groups.

During the last update, the city received over 1,400 comments from residents. Officials hope the number will increase this year because of a bigger emphasis on community engagement.

While formal in-person meetings are still weeks away, officials started the process with an online survey about climate change and its effect on neighborhoods.

Forrester expects to have a final draft of the Green Cincinnati update by year’s end, with the final version approved in spring 2023.