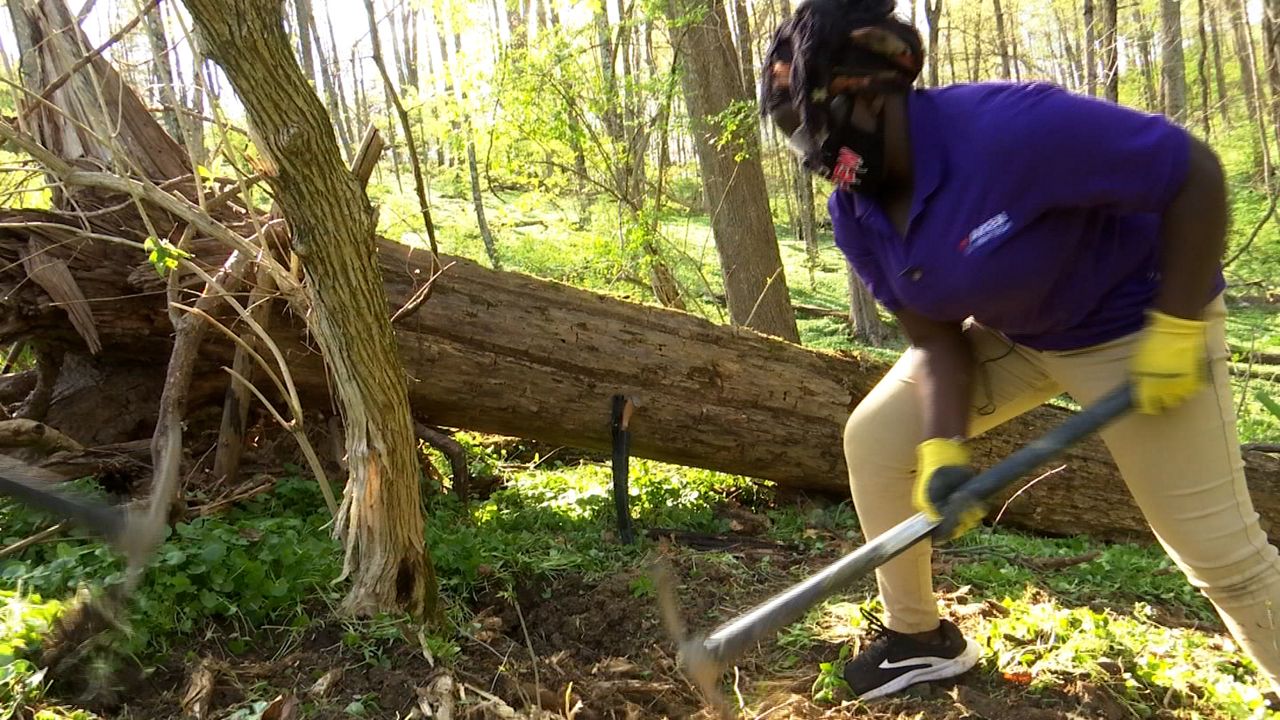 Cincinnati students get to work to make the city greener

CINCINNATI — In the woods behind Aiken High School, afternoons mean a dozen students hard at work, digging, pulling, sawing and tearing invasive species out of the ground.

This is Aiken’s Green Team, one of three this spring through Groundwork Ohio River Valley. The program’s goal is to improve urban green space, advocate for environmental justice and help students train for potential careers in conservation.

Fabiola Matumaine is one of the Aiken team workers. A junior at the high school, she walks to the woods after class and on this April afternoon, her project was honeysuckle. 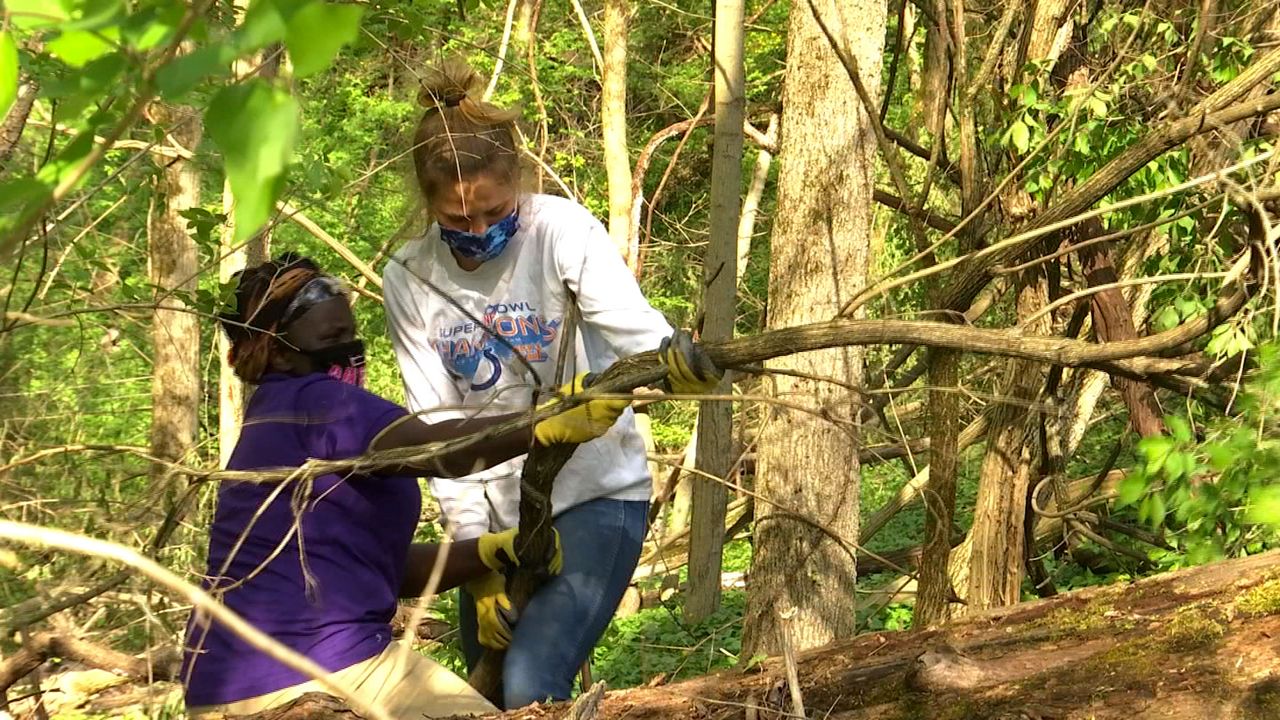 The invasive species came from Asia and quickly spread throughout Ohio, its vines often choking out native species. That’s how it earned the title of Ohio’s least wanted invasive species from the Ohio Environmental Council.

With a pickaxe in hand, Matumaine tried to take the shrub out at its roots. Loosening its hold on the ground until one of her fellow workers could come by and pop it.

After a week of work, the team removed at least a half dozen honeysuckle plants, leaving their limbs piled up to make homes for wildlife and leaving students like Matumaine with a sense of accomplishment.

“My skills are useful to this new opportunity,” she said.

Besides a part-time job, Green Team is meant to be a learning experience.

A former member Groundwork’s summer Green Team, Amaya Lewis, said the program opened her eyes to just how much green space is in Cincinnati and what can be done to protect it.

“It’s always been something that I’ve been really into but I couldn’t actually figure out how I could get involved with the environment until I came to green team,” she said.

The program teaches the concept of environmental justice, which is all about protecting everyone’s right to a clean and safe environment and protecting communities from disproportionate harm caused by pollution.

Lewis said that side of the work stuck with her and she said the most meaningful parts of her experience were when she could see a direct impact on the neighborhoods where they worked.

“I think that’s all something I want to use, and I also want to get more into environmental activism and you know stick up for our environment,” she said.

Her Green Team supervisor saw her passion and suggested a few opportunities including a summer program at Yellowstone National Park. Lewis applied and was accepted to be a part of the youth conservation core, where she hopes to build on the lessons learned in her hometown.

“I do know that this will always be a part of my life and I don’t know if that’s something I would’ve been able to say before the green team,” she said. 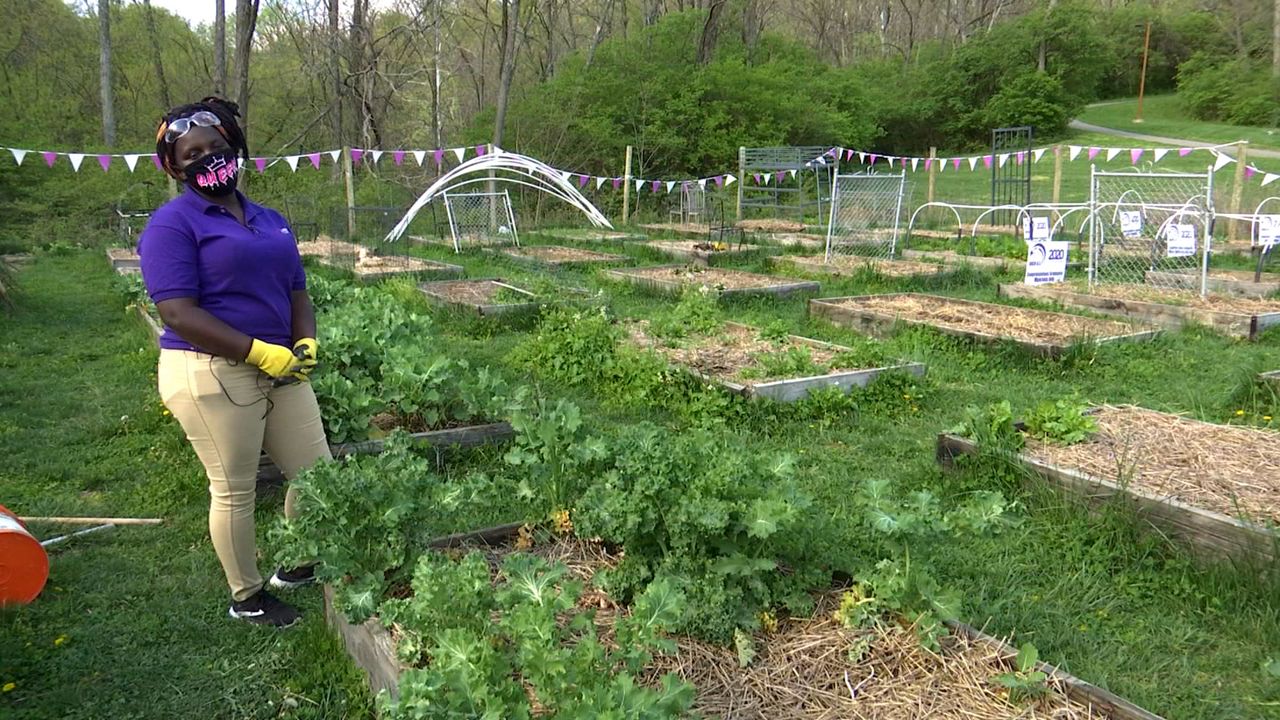 For Matumaine, the best part of the work is seeing what she can make. She has a passion for gardening and small scale agriculture. Her face lights up when she works in Aiken’s garden.

“It’s good to eat food that you planted,” she said. “Because my mom used to plant when we were in our country, eggplant, sunflowers, lettuce.”

Matumaine is from Burundi. She came to Ohio in 2019 and had to learn a new country, a new culture and a new language.

Through it all though, she found the garden was a universal experience.

“It’s how people enjoy the environment,” she said.

Seeing the way gardening helped her open up, one of her science teachers recommended she join the Green Team and in the weeks since, she’s been able to find a place among her fellow workers, making her community better, while learning what it takes to protect her new home.