ELYRIA, Ohio — Families headed to the Speedy Clean Laundromat this Saturday could be in for a pleasant surprise.

The Laundry Project will run from 9 a.m. to 1 p.m. Saturday, March 19. Families can do laundry for free, with soap, fabric softener and other products included. The address is 1043 E. Broad St. #6303 in Elyria.

“Our kind of mantra is, we are hope dealers,” said Current Initiatives founder Jason Sowell. “The focus of it has always been to help address kind of overlooked needs that largely lower-income families are dealing with on a daily basis.”

It started about 13 years ago, when Sowell was in Southern California visiting a friend who volunteered to help the homeless, he said. The friend took a homeless man to do laundry and Sowell accompanied them.

But it wasn’t the homeless man that got to Sowell, he said. It was the mostly single moms he observed trying to wash clothing while wrangling their children.

“I ended up talking to a couple of them and just hearing stories about things, like they were choosing to buy groceries or wash their clothes that week, and having to make that choice,” he said. “That's what kind of spurred the Laundry Project for me.”

Before hosting a Laundry Project event, Current Initiatives looks into laundromat owners, and then works to build relationships with the ones it wants to partner with.

“Not that they have to be a perfect business owner,” Sowell said. “I want to make sure that they actually care about their business, that they're doing right by their customers, and they're just good people in their community as much as possible.” 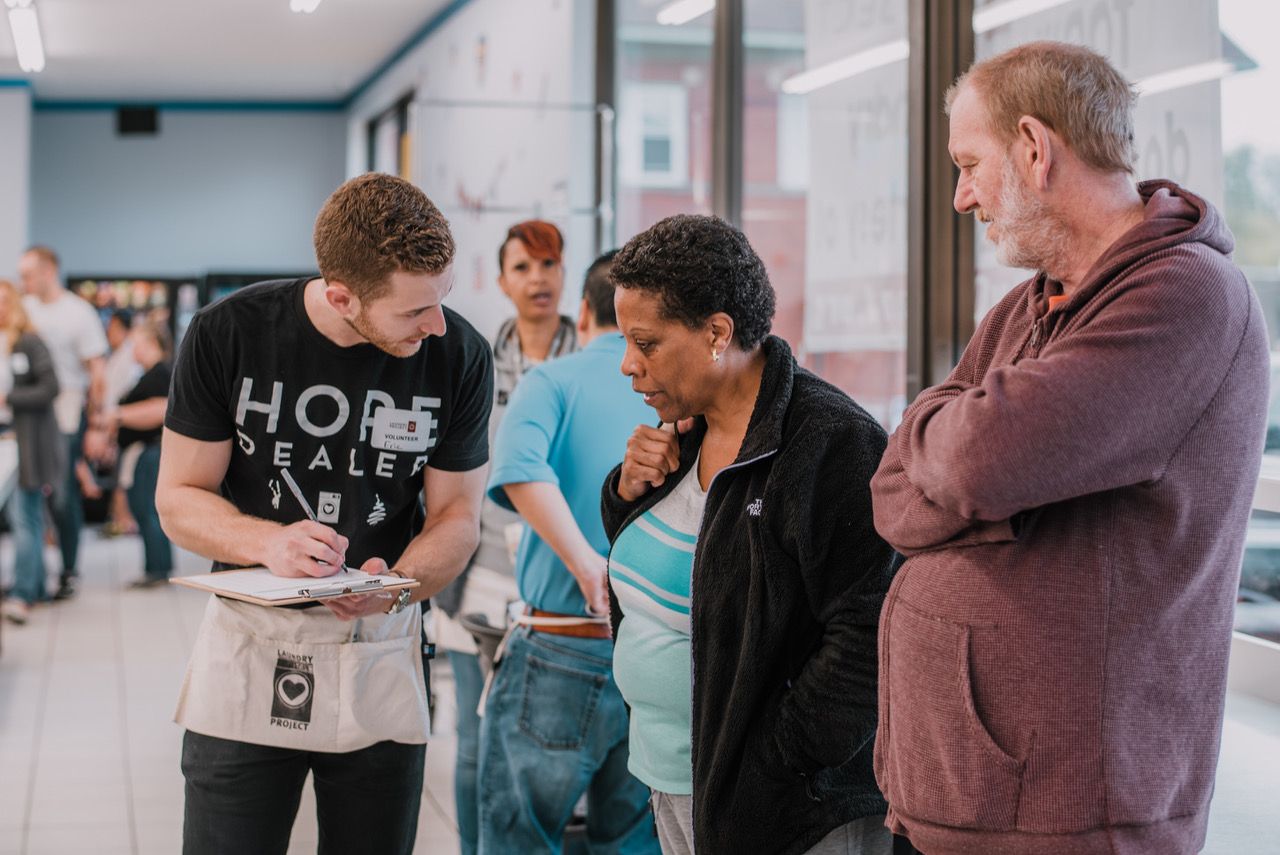 Laundromat patrons do their own washing because of how specific most people are about their clothing, but everything is paid for. (Photo courtesy of The Laundry Project)

On event days, the Laundry Projects brings in volunteers who take over the facility, greeting and managing everyone who comes in the doors, explaining what happens and organizing the activity.

Laundromat patrons do their own washing because of how specific most people are about their clothing, but everything is paid for, Sowell said, adding SNAP benefits don’t cover laundry supplies.

Prior to the pandemic, the Laundry Project provided coffee and donuts, and, when possible, partnered with early childhood programs. That way, while parents were busy, kids could be looked after and kept busy drawing or coloring. The nonprofit is now returning to that model, he said.

“It's fascinating how something as simple as clean laundry, how much hope that can give someone,” he said.

Another aspect to the Laundry Project is beautification of the exterior of the laundromat through Current Initiative’s Clean Mural Campaign.

In the past, the Laundry Project has partnered with a local artist to create a mural on the day of the laundry event so families can see it being created.  One example is a mural that was created at the Downtown Laundromat at 35 South Main St. in Akron.

“Most laundromats you've been in are not fun places to hang out,” Sowell said. “They're kind of dreary and all that. This is also bringing some hope and some dignity and into that space.”

“We're trying to help people understand that's not true,” he said. “There's actually more of a respect, you know, in that neighborhood. For people with money, if something breaks, they just buy another one. You know, these other kinds of neighborhoods, they look at it like, ‘man, this is something that we have pride in.’”

For more information about the Laundry Project, visit the website.

Editor's Note: The Laundry Project will only be at the Elyria location. The previous version of this story included two locations. (March 18, 2022)