AKRON, OHIO — A clear example of “hiding in plain sight,” the Victim Assistance Program  is celebrating 50 years of serving the Greater Akron Community.

Many who have used Victim Assistance services know it offers a support system that’s unique in the community, said President & CEO Leanne Graham.

Victim Assistance is available 24/7 to help anyone who has been victimized, and filing a police report is not required.

The agency’s goal is to place a victim advocate on site within 30 minutes of an event, Graham said. The advocate then shepherds the victim through whatever follows.

“We don't want them to have to tell their story to multiple people, so we are where they are from beginning to end, from hardship to healing,” she said.

In 2019, Victim Assistance raised its physical profile, moving from the agency’s long-time home, in the shadow of the All-American Bridge at 150 Furnace St., to offices in downtown Akron at 137 S. Main St.

The location is advantageous because the victim advocates often work in tandem with the criminal justice system, as a liaison between victims and police, prosecutors and others.

“The whole criminal justice system is overwhelming, so we want to be with there as they walk into the building, if need be, to help provide direction,” Graham said.

For those whose cases go through the criminal justice system, support continues during the long months between the event and court, she said.

While other organizations have expertise in specific areas, Victim Assistance can help victims understand all their options, from legal resources to social services and community programs.

“So there's really no rules, no ineligibility. If you're hurt, we can help,” she said.

The agency’s growth has been well-planned since its launch by Rev. Dr. Robert Denton in the early 1970s, Graham said.

Victim Assistance works to meet community needs identified by a coalition of agencies. 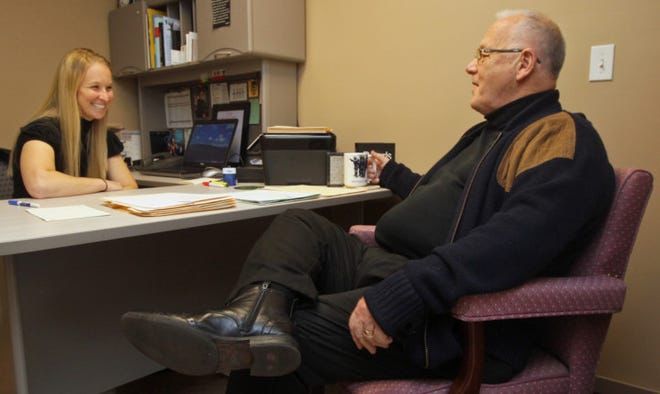 Groups like the Alcohol, Drug and Mental Health Board, Summit County Emergency Management and Battered Women’s Shelter regularly host meetings open to the public, to close gaps in local services, she said.

That’s how the Summit Victim Assistance Academy came to be. Victim Assistance created the training academy when it became clear there was a need for consistent, professional training, so every victim receives the appropriate support.

“It happens every day that someone can tell you, ‘This happened to me,’” Graham said. “So what do you say in that first five minutes? How do you respond?”

Accredited by the National Organization of Victim Assistance, the academy offers credentialed training for caseworkers, clergy, police officers — anyone working with victims, she said. Recently, businesses, such as the Goodyear Tire & Rubber Co., have sent employees through the training.

Organizations outside Ohio also send advocates to Akron for the academy.

Shannon Warfield of the DW Victim Advocacy Center in Elkhart, Ind. was looking for a nonprofit victim advocacy model for the center she founded after her stepson, 21-year-old Darnelle Warfield, was killed in 2017, she said.

With no victim support services available in Elkhart, Warfield, who has a master’s degree in criminal justice and public administration, began researching victim support agencies.

She found the Akron Victim Assistance Program, which had the features she wanted — advocates at crime scenes, professional training and a 24-7 support line, she said.

After speaking with Graham, Warfield and her staff came to town to attend the academy. With Graham’s mentorship, Warfield is modeling the DW Victim Advocacy Center after Akron’s Victim Assistance Program and is on track to successfully grow her center, she said.

“It was so great to see it actually working, and then being able to have somebody that's so willing to share information,” Warfield said of Graham. “And she did right from beginning. She helped me scale everything down into perspective. Her mentorship has meant the most to me, and their training is phenomenal.”

When Denton and his peers founded Victim Assistance, there was no blueprint for helping victims anywhere in the country, Graham said.

"They just worked from their heart,” Graham said. “That was the philosophy.”

Among its offerings were a halfway house, a summer camp for kids and one of the longest-running Christian radio broadcasts in the country, airing from 1926 to 2014, said Rev. Sandy Selby.

Selby served for many years on the board of Victim Assistance and still leads monthly services at the Furnace Street Mission.

Like his dad, Bob Denton became an ordained minister and took over the mission’s work. He also earned a doctorate in sociology. As part of his coursework, Denton studied and proposed a solution for the lack of support services in Akron for victims of crime.

“There were lots of organizations that were serving perpetrators, but nobody that was serving victims,” Selby said. “Bob and a couple of others kind of got together and said, ‘Why can't we start serving victims?’”

In 1972, Denton founded the Victim Assistance Program, which is counted among the earliest victim-advocate organizations in the country.

In 1980, Denton presented a paper at a National Institute of Justice Workshop in Washington D.C. The paper, “Evaluation of Victim Assistance Programs: A historical understanding of the information we wish we had,” is the first piece from that workshop selected for a digitized collection.

His work has been quoted in subsequent victim-advocacy publications, and he was a founder of the National Organization of Victim Assistance.

Denton also served in the police reserves and was the Akron safety forces chaplain. Handing the reigns of the Victim Assistance Program to Graham in 2013, he formed what is now the Bob Denton Safety Forces Support Center to provide counseling to police, fire and sheriff personnel, Selby said.

The support center, which started at the Furnace Street Mission, is now housed at the Summit County Chapter of the American Red Cross.

As part of the 50-year celebration, on Saturday, March 5, Victim Assistance will virtually celebrate its 30th annual Mardi Gras Gala.