Project partners pose for a picture during the groundbreaking for the Warsaw Avenue Creative Campus. (Spectrum News 1/Casey Weldon)

CINCINNATI — Vice Mayor Jan-Michele Lemon Kearney recalls in vivid detail walking up and down the Warsaw Avenue Historic District more than a year ago with Rachel Hastings, the executive director of nonprofit development group Price Hill Will.


Lemon Kearney, who was in her first term on Cincinnati City Council at the time, remembers Hastings pointing out several buildings and storefronts along the 3100 block of Warsaw Avenue between Considine and Grand avenues in East Price Hill. It included the old firehouse at the corner of Considine Avenue that Price Hill Will had rented for years.

Little did Lemon Kearney know back then that eight of those historic but dilapidated buildings would become the centerpiece of a more than $11 million plan to transform the “gateway to the city’s West Side.”

On Wednesday, once again Lemon Kearney joined Hastings in the district. Only this time they were joined by a team of investors and community advocates for the formal groundbreaking for the future home of the Warsaw Avenue Creative Campus.

“When they first showed us these buildings and started telling us about the vision for the Creative Campus, I thought, 'Wow, this is going to be really a great idea,'” the City Council member said. “It’s wonderful to actually see that it’s about to happen and about to be real. It’s a great thing for this neighborhood.”

The Warsaw Avenue project will result in rehab and build-out of 13 apartments over the next 15 months. The units will vary in size and price point, but all will be considered affordable, Hastings said. 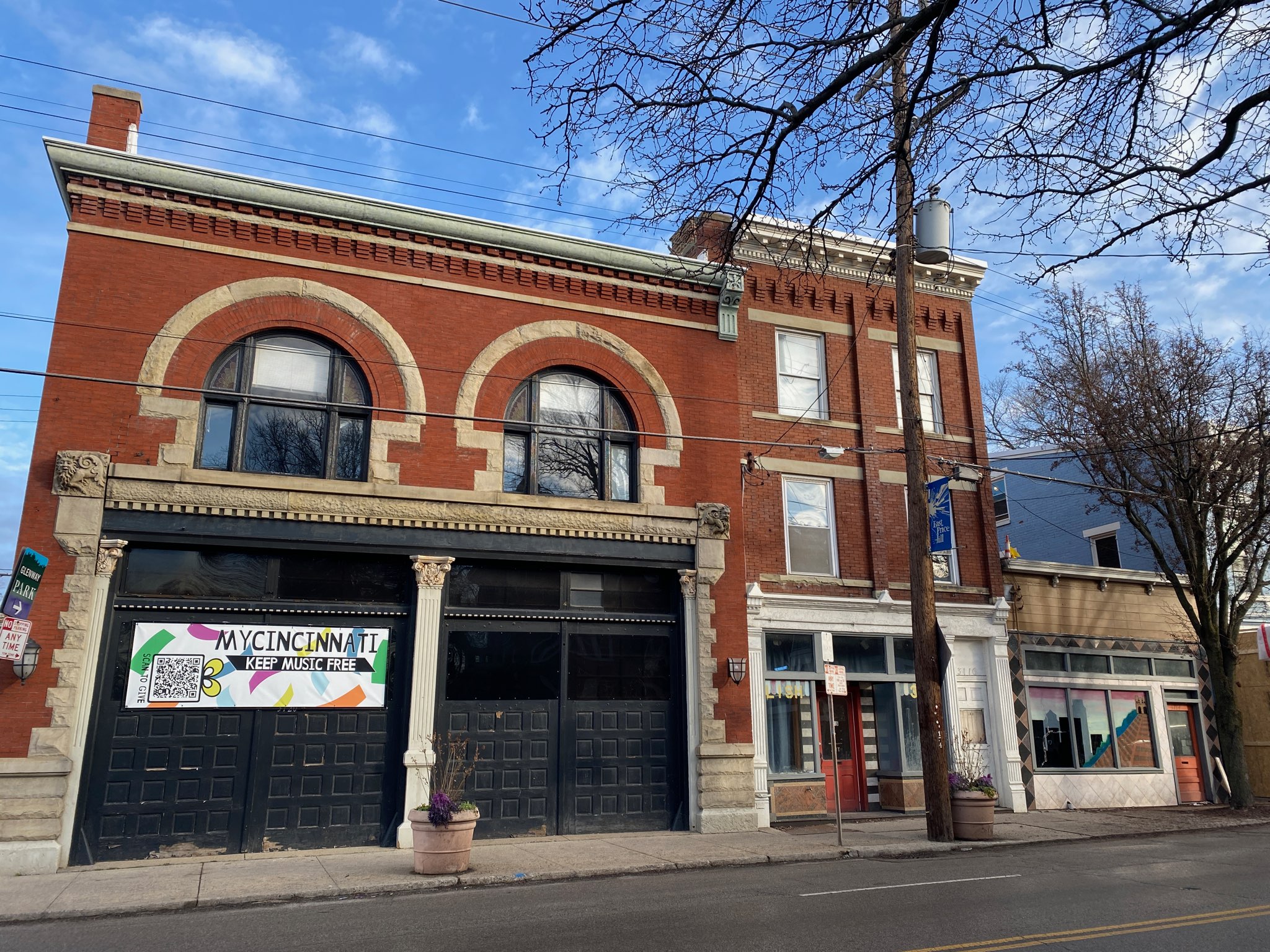 A Warsaw Avenue firehouse has been transformed into the home of the MYCincinnati youth orchestra. (Spectrum News 1/Casey Weldon)

Seven of the eight buildings have first-floor storefronts that Price Hill Will wants to renovate and make available for local small businesses. Hastings said they’re looking for commercial, or nonprofit tenants who are invested in the community and have a “creative or community focus” to them.

Their project partner, Model Group, is helping them identify potential tenants for those spaces.

At the heart of the project is the MyCincinnati youth orchestra organization operated by Price Hill Will that resides inside the partially made-over firehouse. They still have some work to do on that space too, though.

Fittingly, the group decided to pay homage to the MYCincinnati mission by playing makeshift percussion instruments instead of opting for the more traditional golden shovel-in-dirt route.

“It’s hard to believe that we’re here today,” said Hastings, who’s been with Price Hill Will since August 2018. “The past two years have been a challenge for so many in our community, but we’ve worked together to get here and we’re excited. Now, it’s time to really get started.” 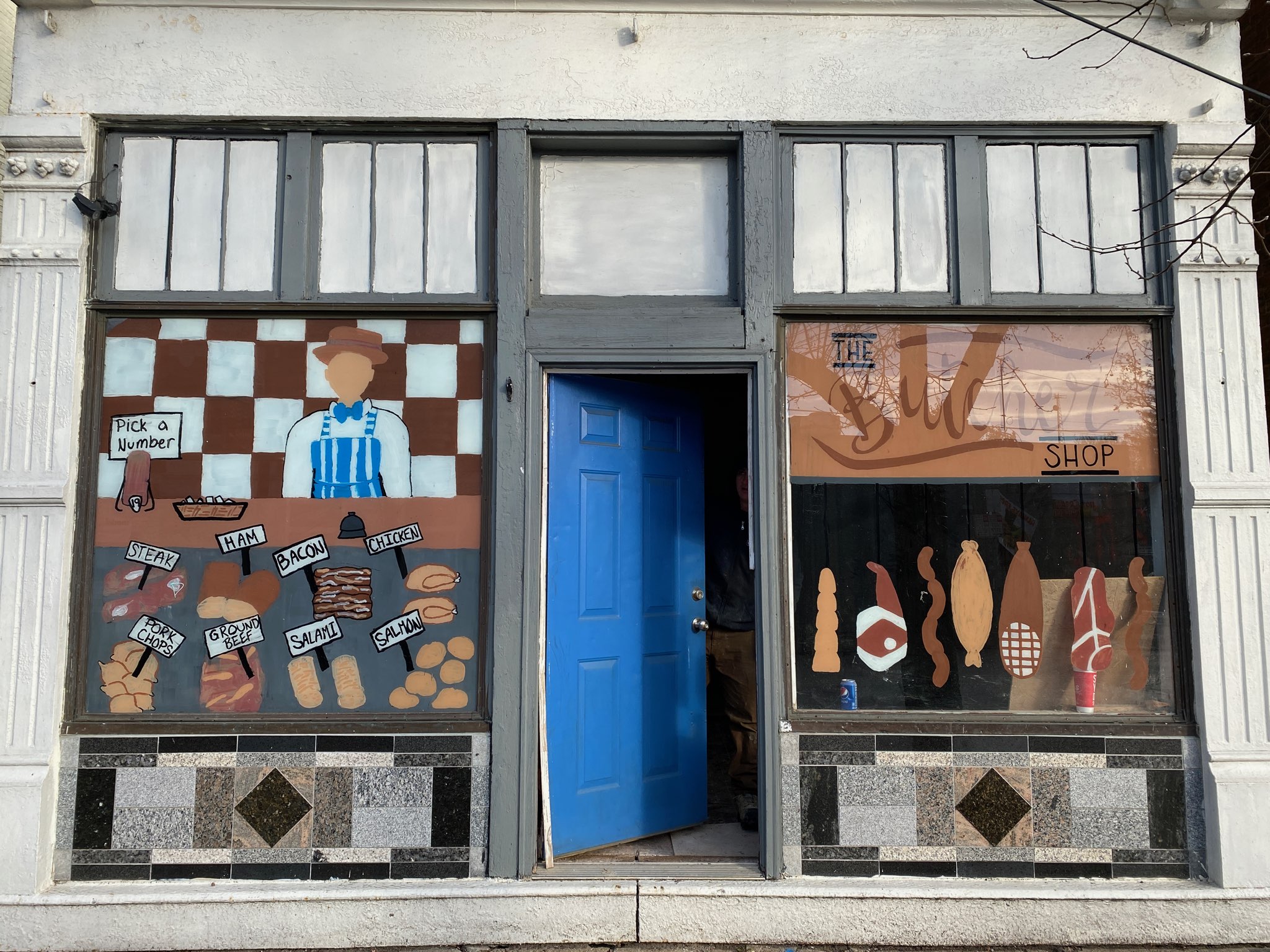 One of the future storefronts as part of the Warsaw Avenue Creative Campus. Project leads painted the storefronts with images depicting the future of what these once-empty storefronts could become in the future. (Spectrum News 1/Casey Weldon)

Affordable housing has been a big issue in Cincinnati over the past few years. A 2017 report by Xavier University's Community Building Institute showed a 40,000-unit gap in Hamilton County.

“The [Warsaw Avenue Creative Campus] project is truly remarkable,” she said. “This is huge for East Price Hill and really great for the people who live here and want to move here. This is great, really for the whole city.”

Beyond just a place to live for more than a dozen families, the project will potentially give a handful of prospective business owners an opportunity to follow their dreams. Lemon Kearney said she sees it as an “affordable way” for a business to “start and grow their business while also investing in the community.”

Overall, there’s about 30,000 square feet of commercial space spread throughout the Warsaw Avenue Creative Campus. MYCincinnati is taking up about half of it.

An investment in all of East Price Hill

To Hastings, the Warsaw Avenue Creative Campus – and really, all their dozens of community projects – isn’t just about the people who will live and work there. It’s about injecting life into East Price Hill and neighboring communities as well.

Sheila Rosenthal, president of the East Price Hill Improvement Association, said the neighborhood has been looking forward to a day like today for more than 10 years.

Rosenthal and other community leaders played a key role in creating Warsaw Alive, an action plan for the Warsaw Avenue business corridor put together by the community council, residents and the city of Cincinnati. City Council approved it in 2018. 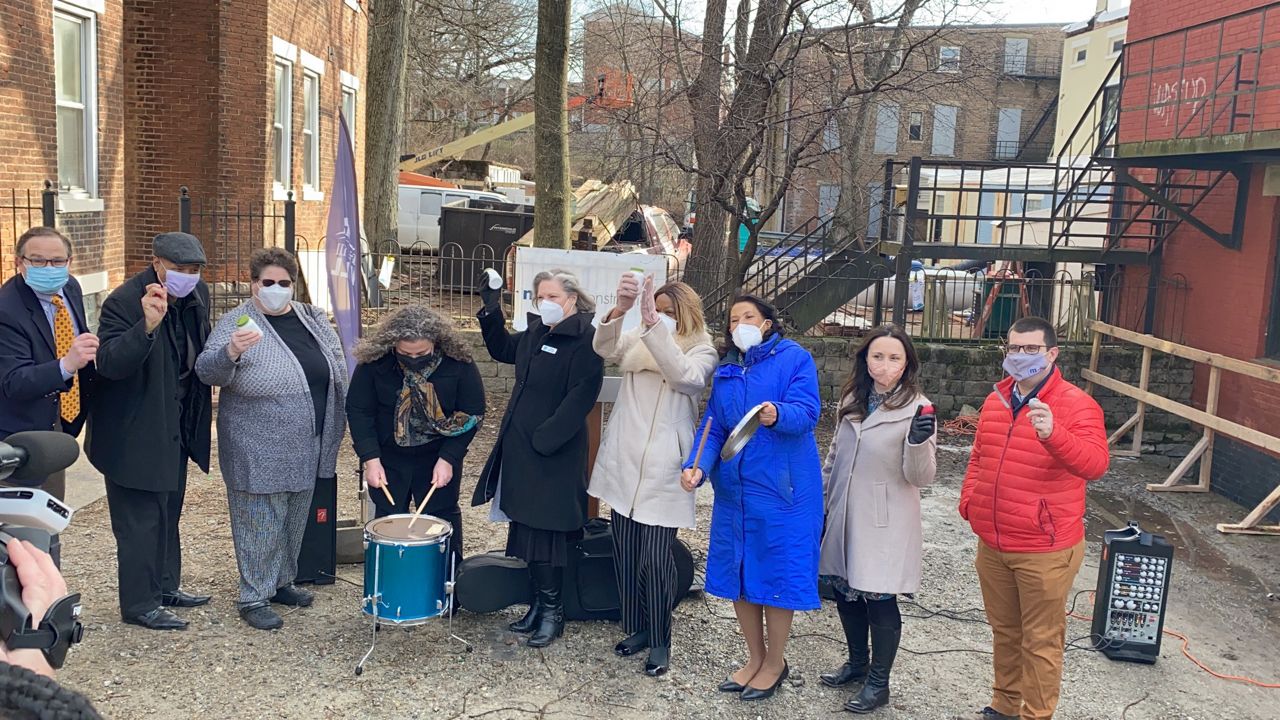 Partners in the Warsaw Avenue Creative Campus play percussion instruments to celebrate the groundbreaking of the East Price Hill project. The act was an homage to MYCincinnati youth orchestra. (Spectrum News 1/Casey Weldon)

That’s welcome new to Sister Sally Duffy, a Catholic nun who has long lived and advocated for the Price Hill communities. She said having a healthy and thriving Warsaw Avenue is especially important given some of the unique challenges facing residents.

Duffy said about 30% in the area do not have access to a personal automobile. She believes it’s vital that there are businesses and amenities located along a bus line or within walking distance to major residential areas.

That’s not just grocery stores and schools, either. That’s things like parks, shopping, places to eat and even the arts.

In recent years, East Price Hill has seen several major developments along Warsaw. That includes the expansion of a branch of the Cincinnati and Hamilton County Public Library and the renovation of Dempsey Recreation Center and park. They also built a community garden there. 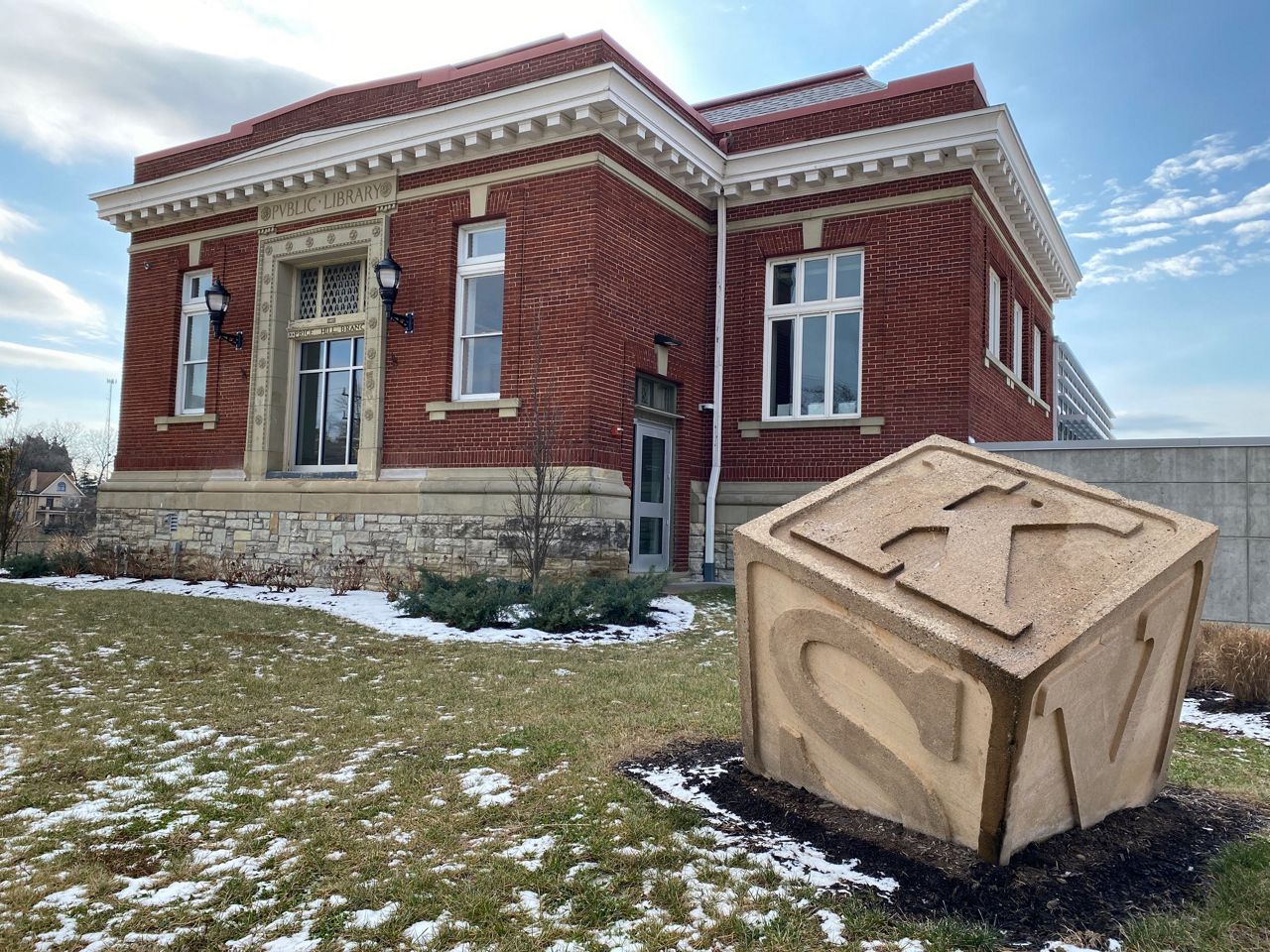 The outside of the expanded public library on Warsaw Avenue in East Price Hill. (Spectrum News 1/Casey Weldon)

They’re all across the street from Warsaw Avenue Creative Campus. Duffy also cited the excitement taking place in the nearby Incline District.

“When you look at all that’s taking place, all that’s going on, it’s working to make this a more walkable neighborhood. It’s improving the overall neighborhood atmosphere and it’s hopefully making this a neighborhood of choice for a lot of people,” she said.

Rosenthal hopes the energy from this new project will send a message to potential residents and business owners that things are happening in East Price Hill and they should consider investing there.

"We’re committed to building up Price Hill and creating a great way of life for the people who choose to live and work here,” she said. “We still have a lot of work to do.”

Projects, like this one, don’t just happen in a vacuum, Hastings said. She was quick to thank all the project partners, calling it a true “all-hands-on-deck” situation.

Price Hill Will continue to own and operate all the Creative Campus spaces. But Model Group will play a huge role in making sure they can be filled. The Cincinnati-based developer handles most of the financing and they’re also serving as the project contractor on the rehab work, a lot of which is complicated by being historic in nature. 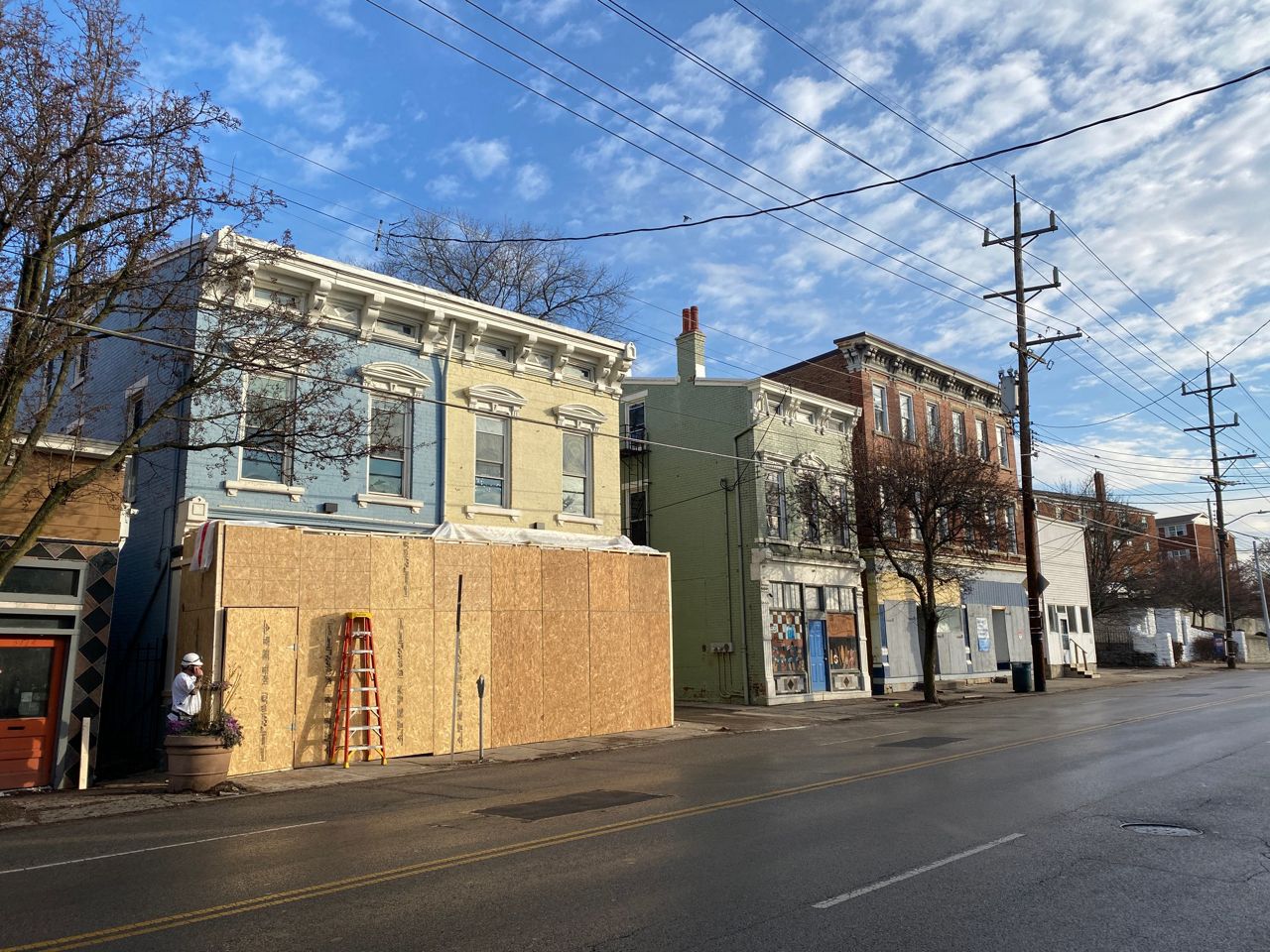 Some of the eight properties that are part of the Warsaw Avenue Creative Campus. (Spectrum News 1/Casey Weldon)

The architecture firm working on the Creative Campus is City Studios, which has significant experience working on historic and preservation projects in Cincinnati, according to Jason Chamlee, Model Group's vice president of mixed-use development.

He said that knowledge will be helpful in preserving these “historic assets.” The historic designation opens up to other financial resources that they can use to help restore them.

Previously, Model Group worked with Price Hill Will on converting an old apartment building on Elberon Avenue into affordable apartments for seniors. They also played a key role in the $10 million conversion of the once-vacant Price Hill Masonic Lodge into Price Hill Will's office. It also features a community space now known as ARCO.

"In this case, our goal is, really, to provide our expertise and to help Price Hill Will execute and bring their vision to life here in the community of East Price Hill," Chamlee said.