CINCINNATI – When Darin Kroger heard about the devastation in Kentucky over the weekend, his first reaction was to pray for those affected. His second was to figure how quickly his team could get on the road to help those in need.


Kroger is a co-founder of the “Masters of Disaster,” an all-volunteer group of trained emergency responders. They’re supported by Crossroads Church, a Cincinnati-based Christian megachurch.

Like many, Kroger kept a close eye on the series of powerful tornadoes that tore through several states, including Kentucky.

When it was over, the storms left hundreds of miles of wreckage and decimated communities in its wake, including entire communities in western Kentucky. Cities, like Mayfield and Dawson Springs, were among the hardest hit. Bowling Green in the southern part of the state suffered extensive damage as well.

At least 75 people in Kentucky lost their lives as a result of that weather event.

“It's one of those things that it doesn't matter how many of these you do – and I have certainly responded to multiple natural disasters as well as international disasters over my 10 years, but it's still heartbreaking every time. It’s heart-wrenching,” Kroger said.

A view of the devastation in Bowling Green, Ky. following storms and tornadoes that ripped through the region in early December 2021.

Melinda Allen-Ray, of Bowling Green, told the Associated Press earlier this week that she barely slept in the nights following the storms.

“I heard (my neighbors screaming) — it traumatized me. I think about that each night when I go to sleep, when I do sleep,” she said. She told the AP she would hear the screaming in her dreams and wake up.

While nothing compares to the loss of life, tens of thousands of other Kentucky residents were left in dire straits having lost their homes or places of employment.

And then there’s “everything in between,” Kroger said. Schools, gas stations, bakeries, beloved stores that have been part of the community for generations; all the quality-of-life establishments that people depend on until they’re no longer available.

“The scope and scale of this destruction is almost beyond belief,” President Joe Biden said Wednesday, according to an AP report.

While visiting Dawson Springs, Biden pledged to do “whatever it takes, as long as it takes” to help Kentucky. He told reporters that the states “will recover and rebuild” in part because so many of those places in the path of destruction have been “met with compassion.”

That sense of compassion has been seen throughout the week as relief organizations from across the country descended to Bowling Green and other cities. Kroger and the Crossroads team arrived Tuesday.

The team from Crossroads aims to show similar support through the work of the disaster team. Kroger said they try to “bring relief, help rebuild and show them that someone cares.”

Crossroads is one of several Greater Cincinnati organizations to send a support team to Kentucky. Matthew 25 Ministries is another. They've partnered with corporate partners like P&G and Duracell. 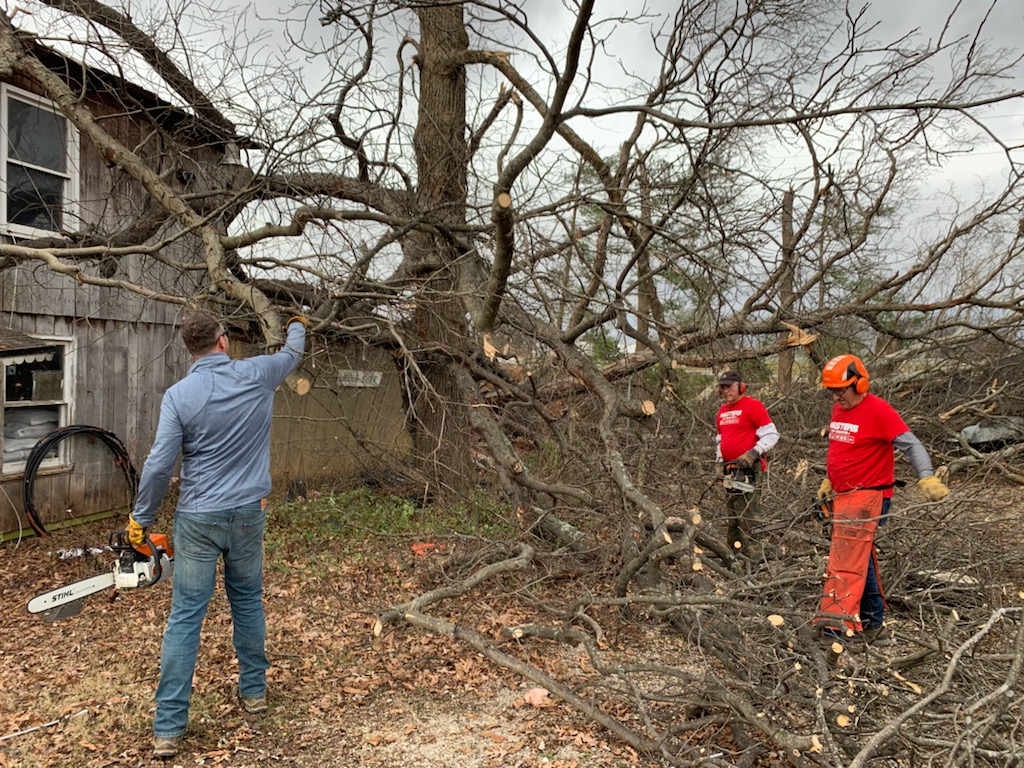 Teams are using a mix of chainsaws and heavy equipment to clear debris in Bowling Green, Ky. The goal is to save as many homes and businesses as possible. (Provided: Crossroads Church Masters of Disaster)

The list of things they will deliver include laundry supplies, personal care kits, first-aid supplies, tarps, water and diapers.

"The loss of life and destruction in Mayfield and the other communities devastated by the tornadoes is truly heartbreaking,” said Tim Mettey, the organization's CEO. “We will continue to help those impacted during this holiday season and into the new year. Our thoughts and prayers are with everyone affected by this disaster."

Crossroads donated $50,000 to tornado relief efforts. Through Sunday, several of its sites are collecting specific items, including baby wipes, diapers of all sizes, contractor-grade garbage bags and large, clear totes. They have a plan for other volunteers to join their team on the ground early next week.

Since it started five years ago, the Masters of Disaster has grown to about 300 registered members, all of whom have taken a litany of emergency response training. They come from the various Crossroads congregations, most of which are in the Greater Cincinnati area. There are satellites in Dayton and Columbus in Ohio, and Lexington and Georgetown in Kentucky, as well.

Kroger, who lives in southeast Indiana, is the outreach coordinator at Crossroads West Side in Cleves.

Their group’s goal is to bring “help and hope” to people coping with a disaster, Kroger said. “Whether in your community, in another state, or even in another country, we will respond with care and compassion.”

They’ve traveled to more than half a dozen disaster sites this year alone – the Houston area following the ice storm; central Kentucky for severe storms; Haiti after an earthquake this past summer; and Louisiana for Hurricane Irma, to name a few.

A call to serve those in need

Kroger has been doing emergency response for about 10 years. He got his start in the field working for International Disaster Emergency Service, based out of Indianapolis, Ind.

The team is made up of people from all walks of life – doctors, firefighters, graphic designers, stay-at-home parents, waiters and bartenders. No one does this full-time, but as Kroger said, there’s no schedule for a natural disaster.

“No one thought there would be a fluke tornado in the middle of December,” he said. Darin Kroger and a team of volunteers work to clear debris from a property in Bowling Green, Ky. (Provided: Crossroads Church Masters of Disaster)

For an average weather event, Kroger said about 10% of the 300 members are part of the travel party. For this trip, they plan to have between 40 to 50 people in Bowling Green over the next 10 days.

They will help put tarps over homes, run chainsaws to remove trees and debris, and do basic cleanup work. They also have a spiritual care team that sits and talks with survivors who have been impacted by the tornado.

“They just want to check them – their physical health, their mental health, their spiritual health – to make sure they're OK. We want to let them know that they are loved. That's as important as cleaning debris and curbing roots,” Kroger said.

Kroger said crews have responded quickly to Bowling Green and have done a “really good job” of getting critical infrastructure – things like electricity and water – back up and running. Some businesses have started to reopen now that they have power.

Roughly 5,000 customers in western Kentucky were still without electricity as of Thursday night. Still, that number is a considerable decrease from where things were earlier this week.

But there’s still a wide lane the tornado took that decimated things in and around the city. Some parts remain off limits to volunteers because search and rescue crews are still looking for a missing teenager.

Establishing local roots to get boots on the ground

Kroger said Crossroads has a 25-year history in Cincinnati and central Kentucky. They’ve established a legacy and connections throughout the region during that time.

Before they arrive in an area for a mission trip, the team works with a local church to set up logistics, things like lodging and food.

In Bowling Green, they’re working with First Christian Church, which is allowing them to camp inside while they’re in town.

“They were generous enough to open their building and their facility to us so we have a big parking lot to park all of our trailers and gear,” Kroger said. “We’re basically in classrooms on air mattresses, or couches in sleeping bags.” 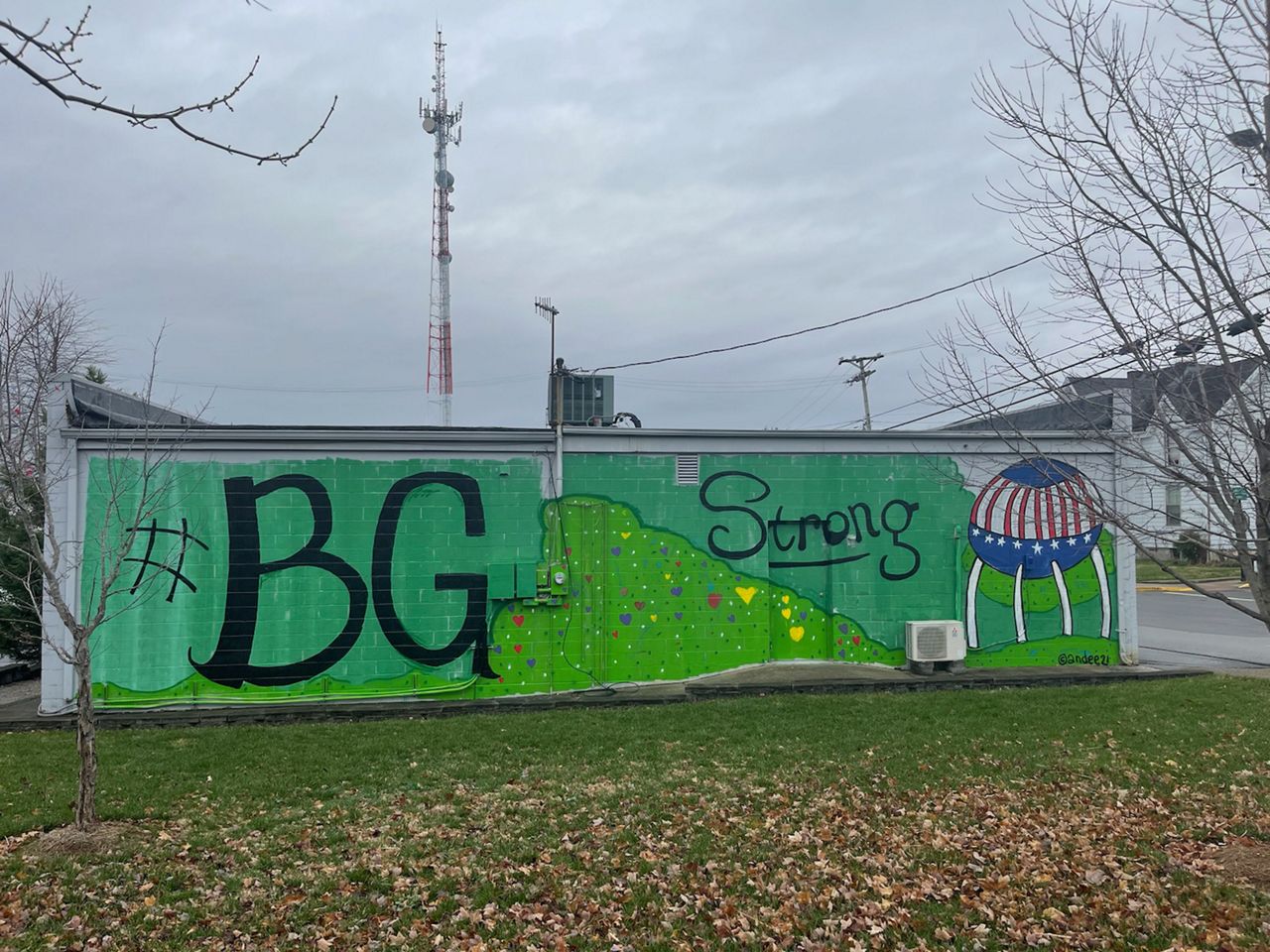 Kroger said they won’t usually stay in hotel rooms on these types of trips because the American Red Cross and other service agencies need those for disaster survivors and victims.

Given the large path of the devastation, the team had to make difficult decisions about where they would go and where they would send their resources. Kroger called the process “the dance” because they have to find a way to balance need with resources available and other variables.

“So you start reaching out to those contacts and checking on people. 'Are you OK? What are you seeing? How could we help?' This is what we do,” Kroger said. “Sometimes you also have to make sure they’re even in a position that’s ready to receive us.”

Kroger said one reason they chose Bowling Green or other neighborhood communities is their ability to help right away. That’s not the case in all other places, he added.

If a place is still experiencing water main breaks and natural gas leaks, they’re not going to head there.

“We try to give them time and space for those things to get repaired by the local utility companies. We try to stay out of their way. But you want to get there as fast as you can and help."

The reason they chose Bowling Green over Mayfield? “Mayfield is decimated. There are no homes to tarp.” Repairs there will require heavy equipment that they simply don’t have.

“The people of Mayfield are not hurting any less than the people in Bowling Green. But in Bowling Green we can tarp roofs and save houses that have been impacted to keep rain from causing any more damage and remove trees,” Kroger said. “Bowling Green is a place where we feel like we can have an impact right away by trying to help people stay in, or save their home.”