COLUMBUS, Ohio — On Monday, the state began vaccinating seniors 65 and older, who join school teachers and a limited group of medically vulnerable residents in the eligible population.

“On Monday, we will go to 65 and up, and we will hold,” Gov. Mike DeWine said during his news conference last week. “We're going to hold that 65 and up for a number of weeks. We have about 2 million people in that category of 65 and up, and it will take us a while to go deep into that number.”

Ohio will soon be in the full swing of Phase 1B immunizations when the state expands eligibility one last time on Feb. 15 to include about 190,000 more people under the age of 65 who suffer from severe congenital, developmental, or early-onset medical disorders.

Vaccines remain limited, and the demand for shots will outpace supply this week, which means available time slots are going fast.

Residents 65 and older have several options when trying to make an appointment, but the processes for registering can be time-consuming and some providers have long waitlists.

As of Monday, about 900 providers have been added to the state’s bulletin of locations, which allows residents to filter by county and identify local providers.

For many residents, the best option may be contacting your primary care provider’s office or a local hospital where you have previously been a patient to inquire about making an appointment or getting on a waitlist.

Another option is local pharmacies, including Kroger, Discount Drug Mart, Marc’s, and Giant Eagle, which are currently focused on vaccinated seniors in Phase 1B.

The state is expected to release more information about a centralized registration portal later this week, but, for now, it may be wise to register for multiple waitlists due to the scarcity of appointments. For older residents who may have a hard time navigating the process, relatives may be able to make appointments on their behalf.

Due to Ohio’s phased approach to vaccinating seniors — the state started with seniors 80 and older three weeks ago and moved down by five-year increments each week, ultimately expanding to seniors 65 and older Monday — many vaccine providers have waitlists that are ordered by date of registration, meaning the appointments are in effect ordered by the five-year increments, state officials said.

This backlog may mean younger seniors will have to wait several weeks for their opportunity to get vaccinated. Officials said vaccinating this population is a top prioritybecause 87% of all COVID-19 deaths in Ohio have come from this age group, officials said when the plan was announced. 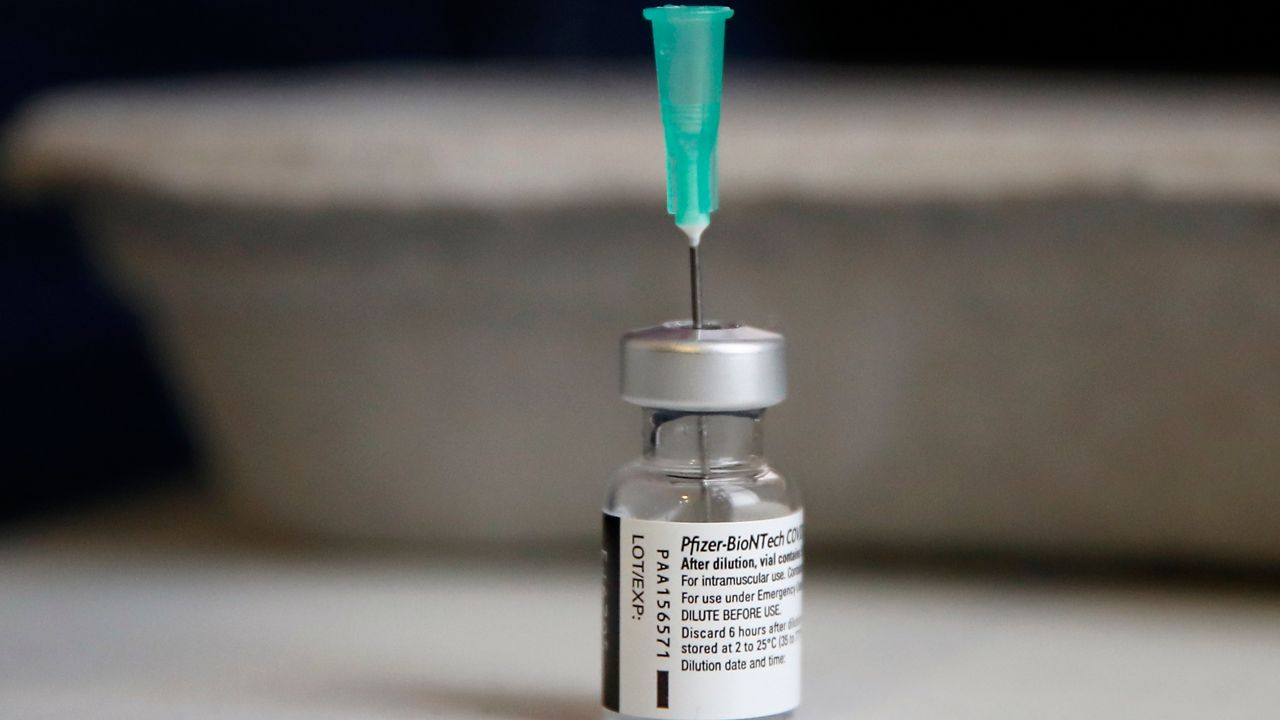 The supply of Pfizer's vaccine is expected to increase in February. (AP Photo / Francois Mori)

By some metrics, Ohio’s vaccination program looks poor, but state officials, for now, can tout being ranked sixth nationally for total doses administered and being No. 1 in the Midwest, according to Bloomberg’s vaccine dashboard. Ohio is the seventh most populous state.

According to DeWine, Sunday is the best day to look Ohio’s vaccine numbers. The state receives vaccine deliveries Monday through Wednesday, so Sundays offer a portrait of how many shots have been administered before the next round starts arriving.

Ohio, with 1.34 million shots administered as of Sunday’s update, leads Illinois (1.33 million) and Michigan (1.19 million), news that will please Lt. Gov. Jon Husted, whose team has been keeping a close eye on how the state compares to the most populous states in the region.

On Saturday, Ohio passed 1 million vaccinations started, with the state's dashboard showing 8.9% of the state had gotten a first shot.

Officials said they are not satisfied with that number, which puts Ohio 35th of all states for per capita vaccinations started. Ohio is doing a bit better when it comes to administering second shots, 30th nationally, having reached 2.6% of the state. Officials said if Ohio is behind, it is because the state has so many nursing homes, which are tricky to vaccinate quickly.

But Ohio was not too far from the pack Sunday. The state is a percentage point and a half out from the top 10 for vaccines started, and officials hope Ohio will gain ground in the coming weeks now that the nursing homes have been visited for second shots.

As Ohio looks forward to an anticipated 40% increase in Pfizer supply in the middle of the February, officials will continue to plan for mass vaccination in the next phase of the vaccine rollout.

DeWine said last week Ohio is not ready to open up football stadiums as mass vaccine centers, but he hopes that one day soon there will be enough vaccine supply to do exactly that. The governor agrees with President Joe Biden’s vision for a mix of mass vaccination sites and small neighborhood distribution points, he has said on several occasions.

Biden said Sunday he would take NFL commissioner Roger Goodell up on an offer to use all 32 NFL stadiums as vaccination sites. “Absolutely we will,” Biden said. But Ohio hasn’t given word yet about using the Browns and Bengals stadiums for vaccines. “I wish we had enough vaccine to open up Ohio State stadium, and open up big venues, and do nothing but vaccinate 24/7,” DeWine said.

Ohio’s weekly Moderna allocation has increased by nearly 45% in recent weeks. This week, the state was expecting 105,600 doses, up from 73,200 a few weeks ago, officials said. From Pfizer, the state is receiving about 73,000 doses per week until the expected increase later in the month. By the end of March, Ohio is expecting about 145,000 doses per week from Pfizer, officials said.