BARDSTOWN, Ky. — Katie Gaffney considers herself one of the lucky ones. As the strike at Bardstown’s Heaven Hill Distillery enters its sixth week, the 15-year veteran of the plant’s shipping department is still showing up outside the main gate many mornings with her picket sign in hand.

“Thank God my husband has a good job,” said Gaffney. “If he didn’t, I wouldn't be here as much. I would try to get another job. It’s stressful.”

On Sept. 11, 420 members of the United Food and Commercial Workers Local 23D went on strike after rejecting a new five-year contract from the distillery. Matt Aubrey, president of UFCW Local 23D, has said the contract includes unacceptable “health care price hikes that reduce take-home pay, cuts to overtime, and drastic scheduling changes.” At the time of the strike, 96% of the union's members rejected the company proposal.

Monday, Aubrey said he thinks opposition has only grown. 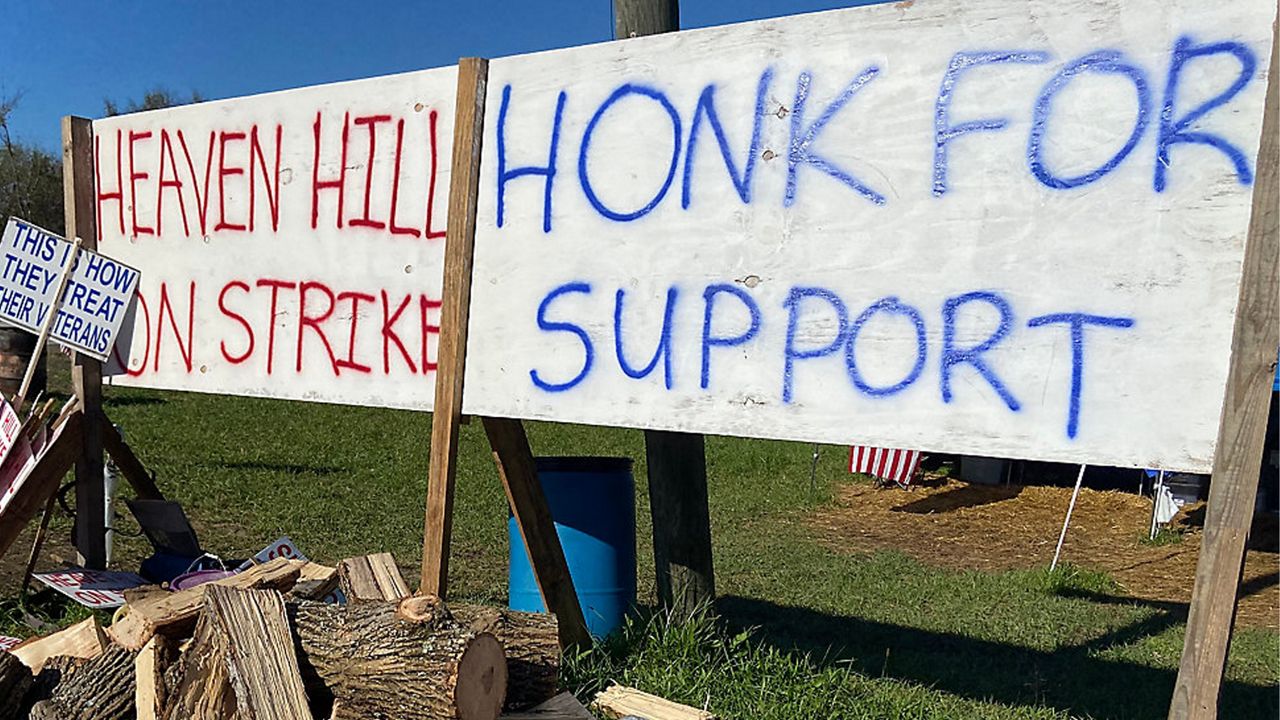 Heaven Hill Workers stock up on firewood as they continue to strike in the cold. (Spectrum News 1 KY/Adam K. Raymond)

“They’re more pissed off now than they were at the beginning because they can see the company is not willing to make progress,” Aubrey said. He estimated that the contract would see 98% disapproval if a vote were retaken.

Union leadership and Heaven Hill met with a federal mediator late last month with hopes of resolving the stalemate. But Aubrey said the company was “not willing to make any movement at all.”

In a statement Monday, a spokesperson for Heaven Hill said the company and union "have reached an impasse in contract negotiations." The statement added that "Heaven Hill will now begin the process of hiring permanent replacement workers."

Aubrey said he thinks the company is hoping to wear the workers down by dragging out the strike. “But it’s actually making them stronger,” he said.

Betty Jo Boone agreed. “They’re trying to starve us out,” said the 30-year veteran of Heaven Hill. Boone has spent many days in the past five-plus weeks on the side of Loretto Road, outside the company's main building, soliciting honks from supportive drivers.

In the past several weeks, Boone has gone from sweltering in the mid-90s heat to wearing long underwear as the morning temperatures dip into the 40s. She’s seen a semi-truck driver take both hands off the wheel to give a fellow striker twin middle fingers, only to lose control and turn the truck on its side. And she’s seen co-workers forced to leave the picket line to find temporary work. “Those of us who have the means to do it are going to be out here holding the line,” she said.

Last month, Boone told Spectrum News 1 that Heaven Hill’s workers made the company millions during the pandemic, and it did not live up to its end of the bargain. "They said they would take care of us when contract time came,” she said. “They have not.”

The strike at Heaven Hill is part of a national wave of work stoppages that have seen 1,400 workers at Kellogg Co.’s U.S. cereal plants go on strike and more than 10,000 Deere & Co. workers walk off the job. All told, 183 strikes have taken place across the country this year, according to the Labor Action Tracker at Cornell University.

Gaffney said she’s noticed the wave and begun to feel like she’s participating in something bigger as workers across the nation stick up for their rights on the job.

Boone, too, has noticed and summed up the trend in two words: “Corporate greed.”