LOUISVILLE, Ky. — Former President Donald Trump endorsed Attorney General Daniel Cameron in the Republican primary for governor of Kentucky 11 months before votes will be cast and the GOP kingmaker’s insertion of himself into the race is already making waves.

In the immediate aftermath of Trump’s endorsement, one candidate said he’s running as an independent, another said she may use a previous endorsement from Trump in campaign communications, and another prospective candidate hinted that she may soon launch a campaign of her own. And there’s still 17 months until the general election.

“Kentucky is clearly, I don't want to say ‘Trump country,’ but I might as well say it,” said Dewey Clayton, a political scientist at UofL. “My inclination is that this will be quite meaningful and could separate Daniel Cameron from a very crowded field in the Republican primary.”

So far, nine Republicans have filed paperwork to run for the party’s nomination in 2023 and Clayton said voters often use endorsements to help them sort through a large crowd of contenders. “A lot of people take their cues from their elected leaders,” he said.

But some of Trump’s recent endorsements in governor primaries haven’t worked out like he wanted. In Georgia’s recent Republican primary, Trump backed former U.S. Senator David Perdue over incumbent Gov. Brian Kemp. It didn’t appear to matter, with Kemp besting Perdue by more than 50% of the vote. Similar scenarios played out in Idaho, where Trump backed Lt. Gov. Janice McGeachin, who lost her challenge to incumbent Gov. Brad Little by 21%. In Nebraska, Trump’s pick for governor, Charles Herbster, narrowly lost to Jim Pellen.

In Kentucky, the former president’s endorsement has led one declared Republican candidate to remove himself from the primary. Eric Deters, a former attorney in Northern Kentucky, said last week that he’ll run for governor as an independent, not a Republican, due to Trump’s endorsement.

In an announcement made on his YouTube show, Deters said Trump's endorsements are often wrong and evidence that he’s more concerned with backing a winner than someone with whom he agrees. "Trump's not my kind of guy," Deters said.

Another candidate for the Republican nomination said she may use Trump's prior endorsement of her for a different election in her advertisements for this election. State Rep. Savannah Maddox (R-Dry Ridge) was asked during an interview with Terry Meiners about that possibility and she said, “Yes, absolutely, and I feel as though he endorsed me because I am someone who can be trusted to defend what he was working for at the federal level.”

Meanwhile, former Ambassador Kelly Craft, who appeared with Trump at this year’s Kentucky Derby, remains a possible candidate for the office. In a statement to the AP following Trump’s endorsement of Cameron, Craft said she has received encouragement from voters during recent travels around the state. “My faith, family and principles will always be the compass I follow. I am enthusiastic and motivated about helping Kentucky,” she said. “Stay tuned!” 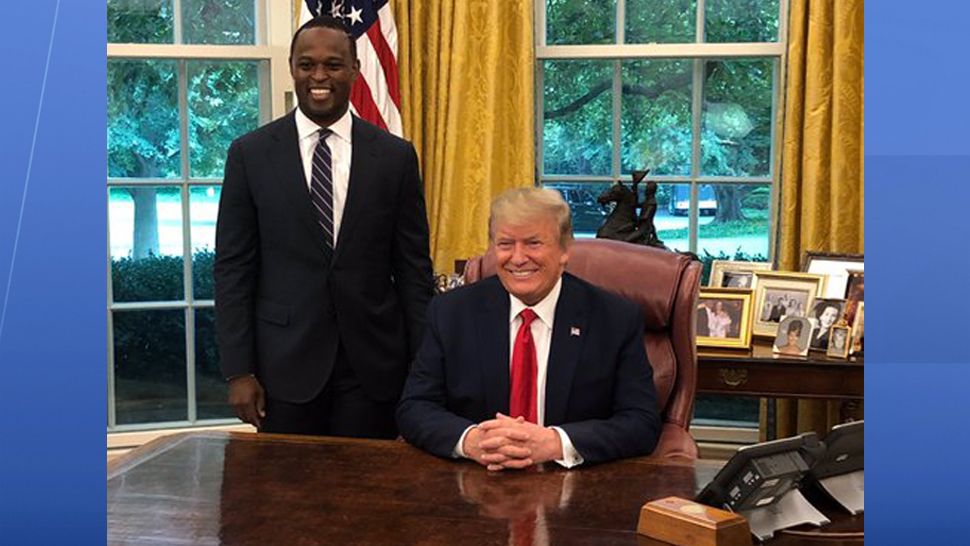 While Trump’s endorsement is decided, there remain several open questions regarding his involvement in the governor’s race. Clayton said Trump may visit Kentucky to campaign for Cameron, especially with Kentucky’s governorship being one of the few major offices on the ballot in 2023.

Tres Watson, a Republican political strategist, said it’s hard to know the effect of Trump’s endorsement on this race until Cameron puts it to use. “How do you maximize it? How do you turn it into fundraising or organization? How do you promote it in paid ads? That's all stuff that comes a little bit later in the campaigns,” Watson said.

His hunch, though, is that Trump’s endorsement won’t be as meaningful as it often is when for federal offices.

“People want to know their governor,” said Watson, who is supporting Agriculture Commissioner Ryan Quarles for governor. “They expect their governor candidate to be at the Mountain Laurel Festival, or Cow Days or Ham Days or Fancy Farm, and they expect to have that interaction with them. So I think the involvement of outsiders has less of an effect on the governor's race.”

But even if Trump’s track record is spotty and his influence is smaller in a governor's race, Clayton said the endorsement of the still-popular and wildly influential former president “can only help Cameron in the state of Kentucky.”