Laney Frye, a sophomore on the University of Kentucky women's golf team, practices putting. Frye and her teammates are raising money for those affected by tornadoes in Western Kentucky. (Spectrum News 1/Brandon Roberts)

LEXINGTON, Ky. — It was a conversation with a fellow golfer at Duke University that inspired University of Kentucky women’s golf team member Jensen Castle to spearhead a fundraiser for tornado victims in Western Kentucky.


Castle, a junior marketing and management major from West Columbia, South Carolina, helped launch “Birdies for Tornado Relief” intending to establish an annual fundraiser to help communities affected by disasters. An EF4 tornado tore through parts of Western Kentucky in early December 2021. The tornado claimed many lives and displaced thousands throughout the region.

“We're so excited to finally get this plan in motion,” Castle said. “As athletes, we have so much power and say, so why don't we use that to our benefit and give back to our community? Western Kentucky has had a rough year, and as a neighboring school, we need to help as much as we can.”

The fundraiser, which is a partnership with the American Red Cross, began with the Darius Rucker Intercollegiate tournament in late February in Hilton Head, South Carolina, and continues through the 2022 season, which enters postseason play Wednesday, April 13, with the SEC Championship in Birmingham, Alabama.

Money is raised by pledges that accrue with each birdie made by UK women’s golfers. Pledges start at 50 cents and the total increases if a Wildcat registers an eagle, albatross or hole-in-one. Lump-sum donations are also accepted and encouraged. The fundraiser has raised nearly $600 to date.

“A little goes a long way,” Castle said in a press release. “We appreciate any donation we get. Not only does the money go to a great cause, but seeing the donations motivates us to make more birdies.” 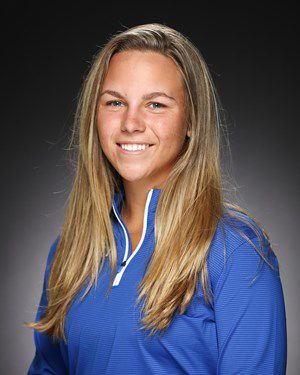 Laney Frye, a sophomore business major from Nicholasville, said Castle motivated the team to get behind the fundraising effort.

“I think there was something else similar,” Frye said, referring to the Duke University women’s golf team’s fundraiser for a children’s hospital. “Jensen told us we need to play for something bigger than just a golf score. She came up with the idea of birdies for something, and with all the tornado relief efforts going on in Western Kentucky, it just fits together perfectly.”

UK women’s golf head coach Golda Borst said she is not concerned much with how much money is raised off this fundraiser because the team and program are looking toward the future regarding such efforts.

“Getting this off the ground, and then building momentum, continuing to build momentum and getting people excited is just as important,” she said. “It's been nice because it's consistent. We know every time we make a birdie, it helps the tally. We keep track. We have a birdie sheet downstairs and we keep an eye on them. When they started talking about this during the Christmas break, the whole team was on board. Then it was a matter of wanting to do something local, so obviously they thought of tornado relief. It’s been pretty special.”

Finding a required nonprofit partner for the fundraiser, setting up a website and getting approval from UK’s compliance office meant actual fundraising did not begin until March.

“We will definitely keep this going,” Borst said. “I think it'll keep growing. You realize as you do this that it's hard to get some traction and get people involved. I think the more we get it out there, the more it will engage people because those tornado victims still need help. The devastation is unbelievable.”