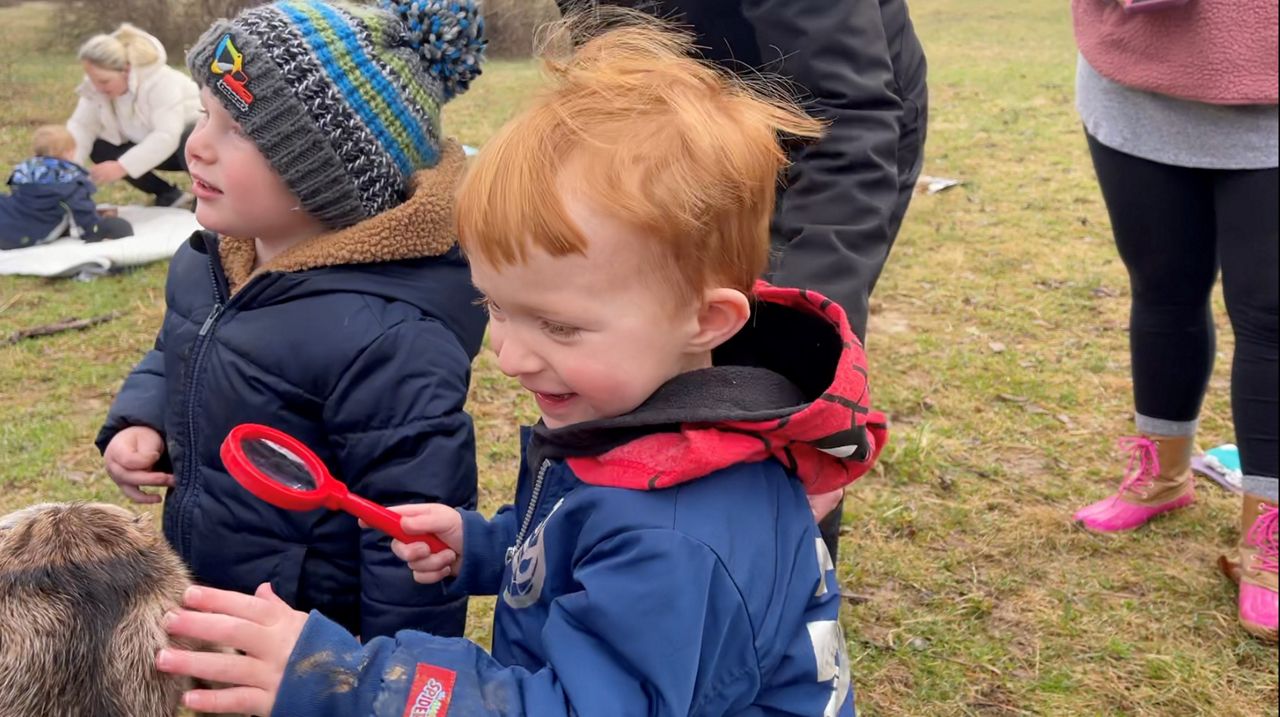 Evie Wilkinson's son, Ford, plays with a goat during a LEAP Outside class at the Blackacre Nature Preserve. (Spectrum News 1/Amber Smith)

Outdoor learning class for younger children takes off in Louisville

LOUISVILLE, Ky. — Forest schools have gained popularity during the pandemic as it provides an outdoor learning setting. A Louisville mom realized her son was too young at the time to attend either of the two in town, so she started her own for younger kids.

With challenges comes innovation. That was certainly the case for teacher Evie Wilkinson when the pandemic hit. Trying to teach her middle school students from home was a challenge, to say the least, since she had her son, Ford, home with her too. She left her K-12 teaching role to become a stay-at-home mom.

While she was home with Ford, she started looking into forest schools. It’s a type of early childhood education that takes place in forests or woodlands instead of an indoor classroom. She liked what she was learning about those. Plus, the thought of an outdoor setting was appealing because of COVID-19.

“You really get to use those five senses when you are out in nature and our kids get to develop those five senses and the language that comes with them when they are feeling things and making those associations. It’s very hard to replicate that in an indoor classroom,” said Wilkinson.

At the time, the two forest school options in Louisville were Swallowtail Forest School and Thrive Forest School. Her son, Ford, was too young for both. She started subbing when teachers were needed there and got her certification to teach those types of classes.

Realizing there were likely other parents with younger kids who wanted an option like this, she started LEAP Outside in 2021. That stands for Learning Enriched by Adventure Play. They offer parent-children classes for kids 0-6 years-old. 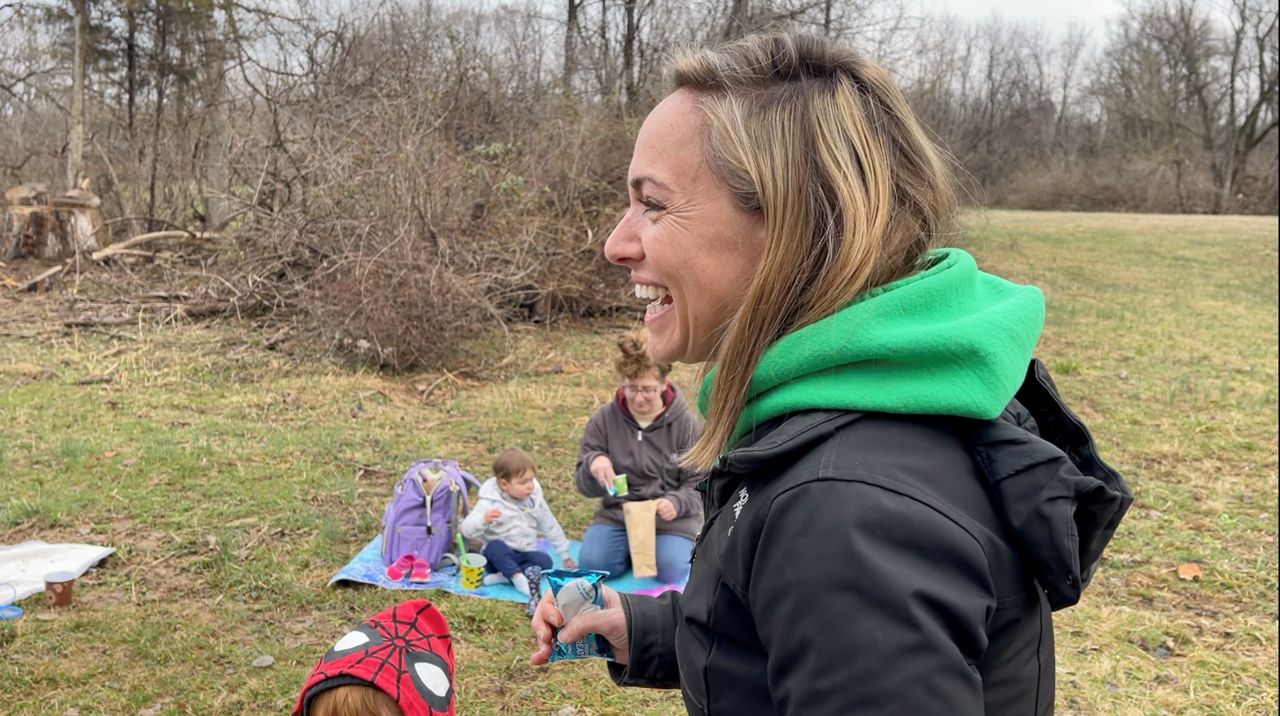 Since then, LEAP Outside has really taken off.

“It is our one-year anniversary. I was looking back at all of our pictures and it’s amazing how much they’ve grown in a year,” said Wilkinson.

Erica Morgan and her kids, James and Daniel, have been attending LEAP classes from the start. 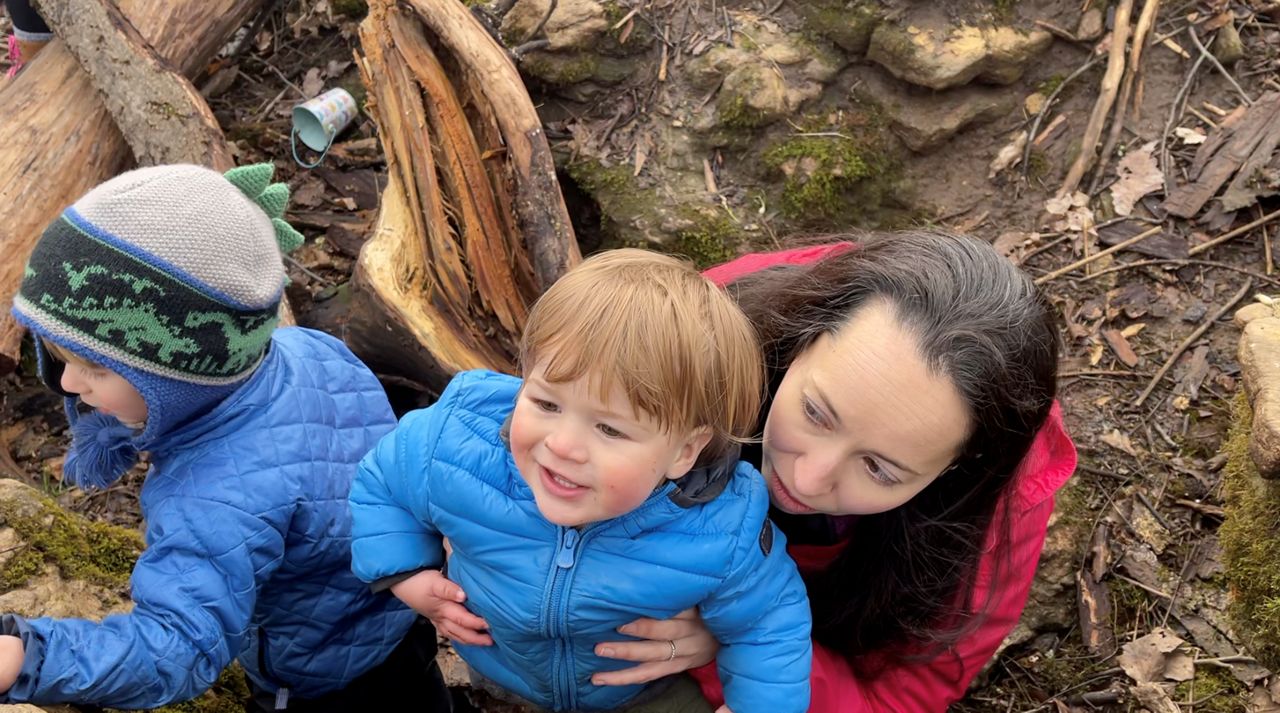 “We love LEAP. LEAP has been so great for my kids. These kids have grown up with LEAP,” said Morgan.

For her, it all started with a chance encounter. Her oldest son started playing with Wilkinson’s son in a mud puddle. The two moms started talking, and the rest is history.

“Evie and I started talking, and she told me how she was going to teach a class at Maples Park the next day and she just started LEAP,” said Morgan. “We realized both of us love to get out in nature and get outside, so Evie and I just connected. My kids have been in LEAP ever since.” 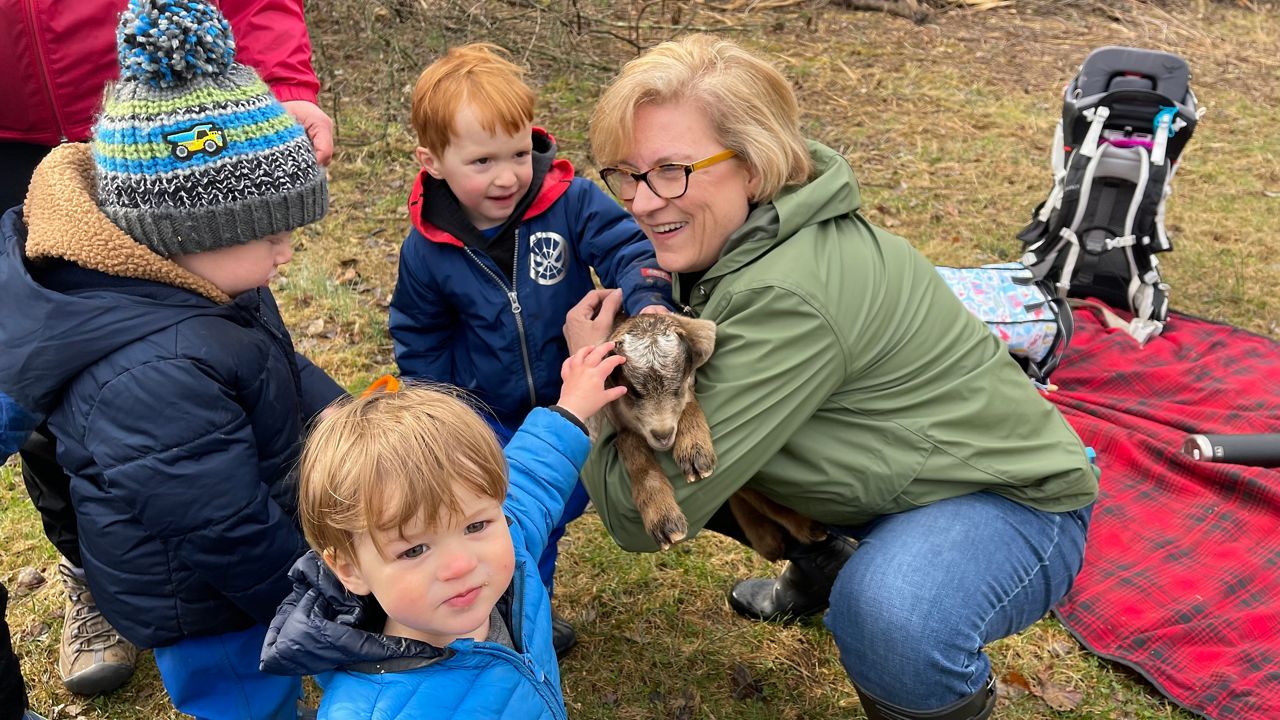 “It does so much for their development if they’re not just looking at a picture of a baby goat. They actually, two weeks ago, saw a baby goat being born. They watched it. Now, they’re watching the baby goat grow up,” said Wilkinson. “They are also having those sensory experiences like they are touching it and feeling it and they know what it feels like and sounds like. All of that is helping them associate what is a goat from a young age.”

After that, Wilkinson started the class off with a hands-on lesson about rocks. They got to use magnifying glasses to look at rocks. Then, they learned how sedimentary rocks are formed by making some replicas of their own. After the lesson, it was time to head into the woods to see which types of rocks they could find in nature. 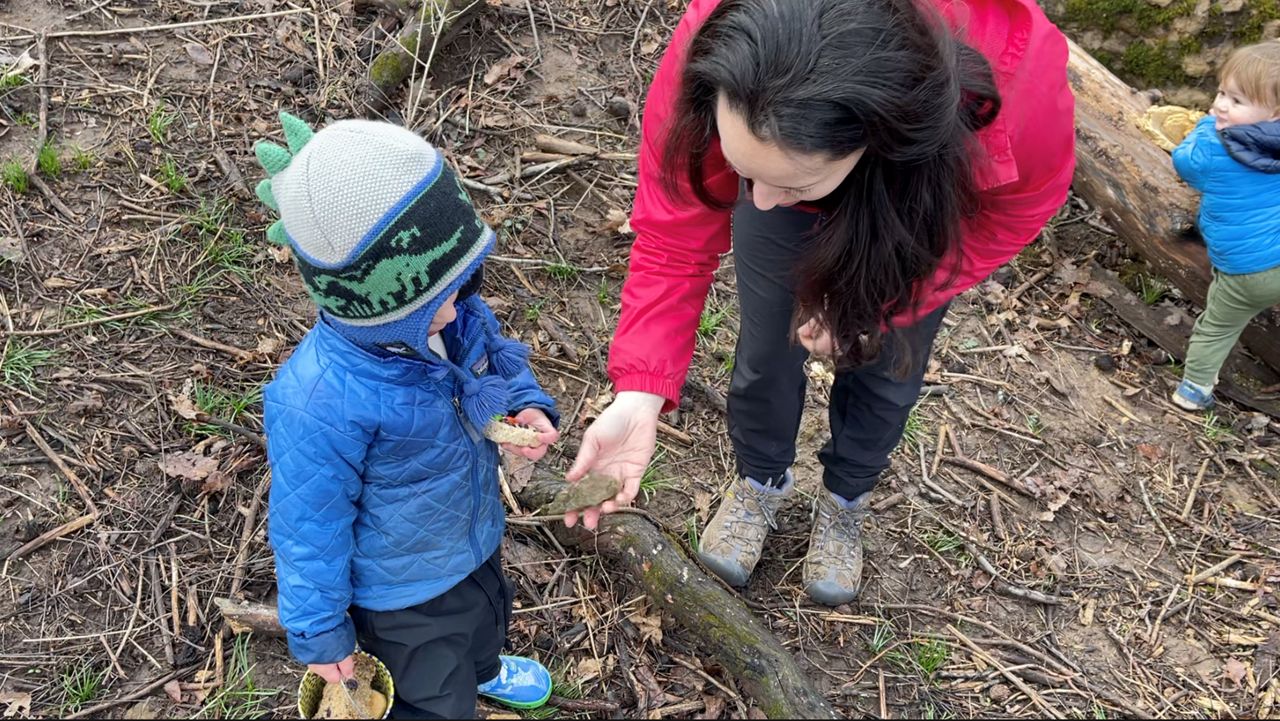 In addition to the rocks, they found all kinds of other things like worms, walnuts, moss, etc. When they were done exploring, they came back together to share what they found.

After that class wrapped, it was time for another LEAP Outside class. Gardening is a new offering this spring. 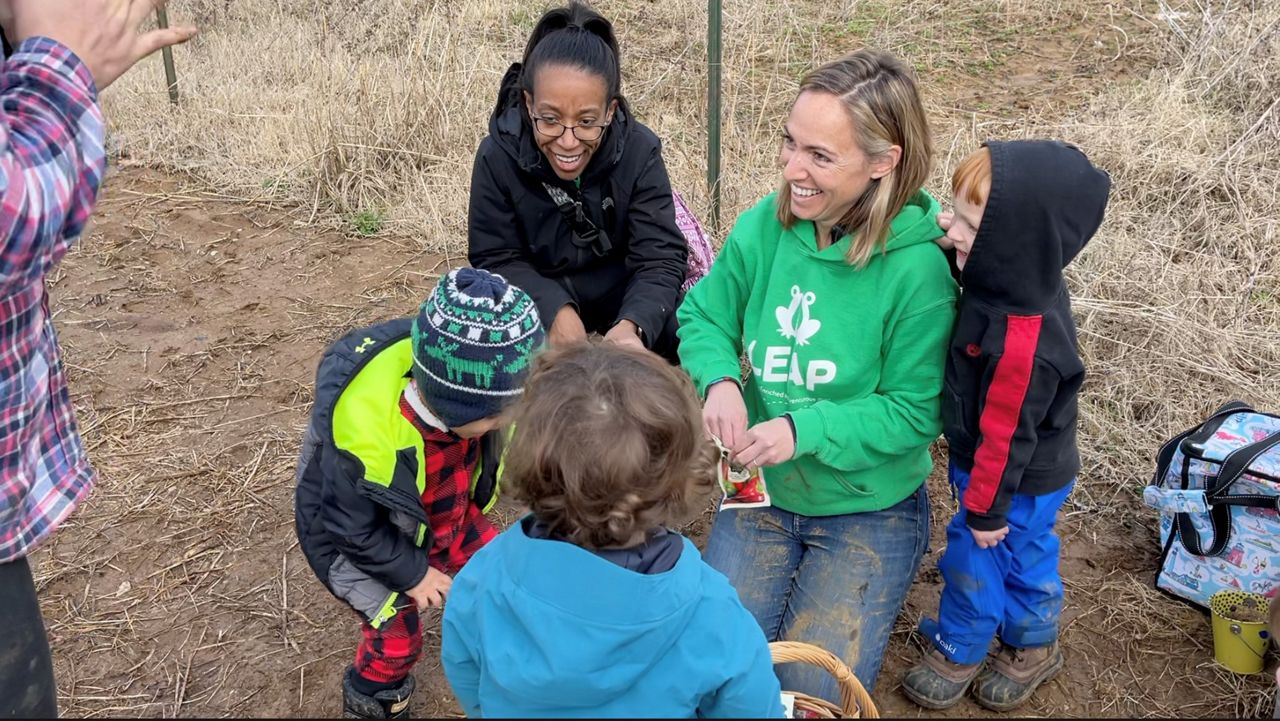 In that class, students prepped the soil in the garden and planted some seeds. They will tend the garden throughout the session and watch as their seeds grow.

The students also got planters of their own to take home. They got to pick from several different seeds to determine what they want to grow with their families at home. 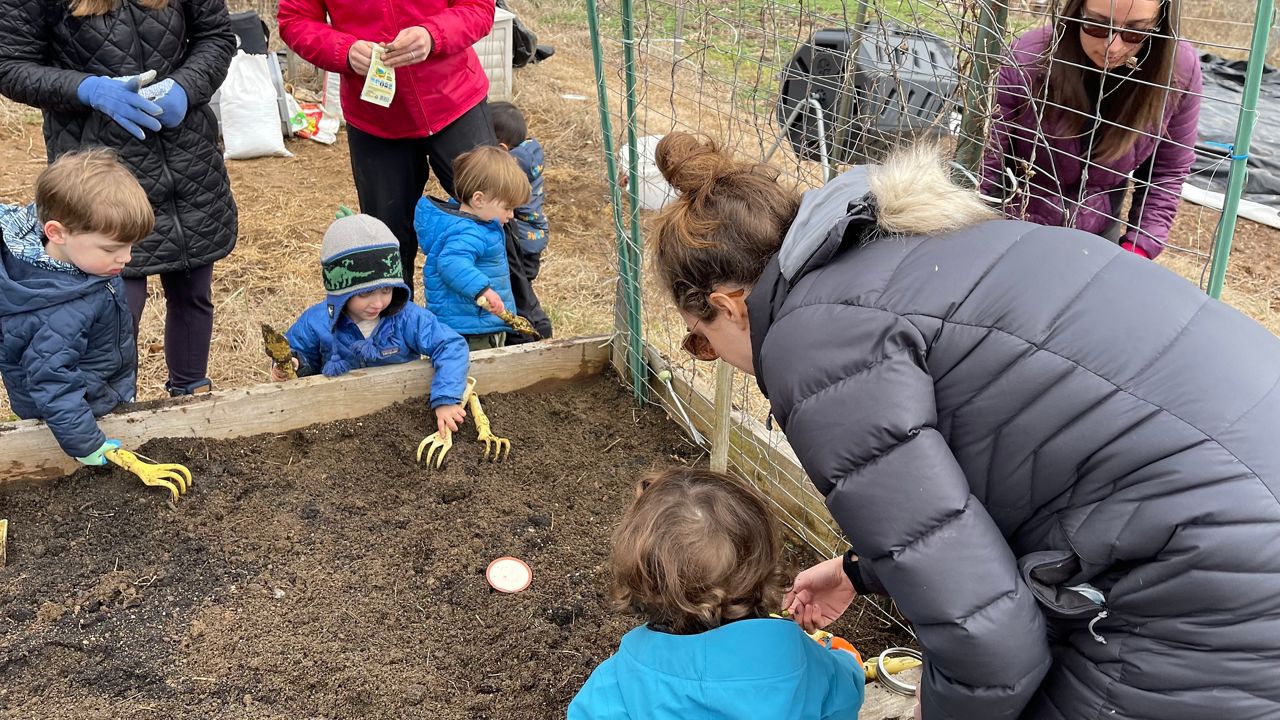 Morgan says taking part in LEAP has changed her entire perspective on education. She was going to send her kids to a prep school for preschool in the fall, but like forest schools so much that she enrolled them at Thrive Forrest School instead. She also has found her son talks a lot while out in nature. Morgan said LEAP helped them not need to send him to speech therapy.

The full spring session is underway (March-May) for $180. If you want to do April-May only, it will be $120. You can find more information on LEAP’s website. If you have questions, you can email LEAP.