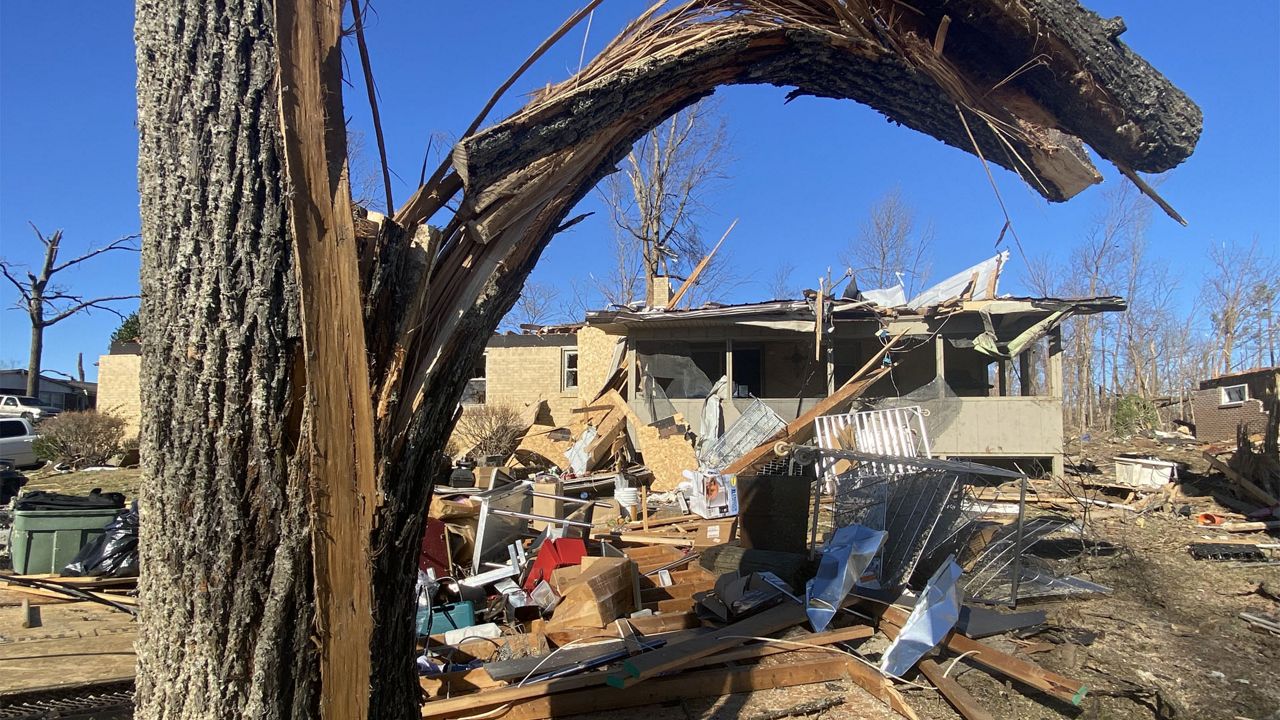 Residents are searching through what's left of their homes in Mayfield, Ky. (Spectrum News 1/Erin Kelly)

‘Lucky to be alive': Mayfield storm victims sift through what remains of their homes

MAYFIELD, Ky. — Kentucky leaders believe as many as 1,000 homes were damaged or destroyed in the tornadoes, leaving storm victims like Robin Campbell to sift through what remains.


Campbell said she doesn’t know how much she can save from the home she and her husband were remodeling when the tornado upended their lives in a matter of seconds.

“Would not have imagined that as quickly as this went through that this is what we got, and we’re fine,” she said, standing among pieces of wood and siding and a tub of Christmas ornaments.

Friends were at her home Monday afternoon to help move furniture out of the house, now missing a roof.

Campbell also lost her mother in July and her business due to the pandemic, she said.

"We’re just fine, but just a little overwhelmed with the damage and trying to get some personal items out that we think we can save,” Campbell said.

Whether above downtown Mayfield or Campbell’s neighborhood off KY-58 a few miles away, the images tell of the same terror experienced by anyone in the storm’s path: roofs ripped open and snapped trees in every direction.

One door to Campbell’s home was blocked by debris.

“We squeezed through, shut the door and then shimmied along the side of the house next to the brick until we got to the street and then we just kind of waited until our son came and got us, and he lives eight miles away, and it took him two hours to get to us,” she said, recalling the moments after the tornado passed.

Down the street, a FEMA search and rescue team from Tennessee came to check on Roy Dublin’s house, not long before he returned to gather what he could.

At 86, Dublin has lived there for more than 40 years and it’s where he was Friday night when the tornado barreled through.

“I was sitting in the hallway back over here and I just looked up and seen the sky and I said, ‘Well, I’m next. Dear God, don’t let me die here,’” Dublin said. "And it quit. It went up. You can see — look at the tree tops. You can see where it lifted.”

Gov. Andy Beshear said that of the more than 70 people confirmed killed in Kentucky by Monday afternoon, as many as 20 were in Graves County.

"Lucky to be alive,” said Dublin. "It was the most devastating thing I’ve ever been through."