LMPD reforms could cost up to $10 million a year. (Spectrum News 1)

LOUISVILLE, Ky. — The Louisville Metro Police Department (LMPD) has begun hatching a plan to reform itself, even as the Department of Justice investigation into whether it engages in discriminatory policing continues.

City officials outlined that plan in a Metro Council meeting Monday night, detailing the reforms they’d like to implement and estimating the price tag that will come with them.

“Those efforts are an investment in your city,” said Matt Golden, Louisville’s Chief of Public Services. The proposed LMPD reforms would cost between $8 million and $10 million, officials said.

The main plank of the proposed reform is the creation of what assistant police chief Paul Humphrey called “an accountability and improvement bureau.” This new bureau, to be run by a civilian, would be charged with reviewing LMPD policy, creating systems to audit everything from paperwork to search warrants, and increasing public input in the department.

The proposal would also see an overhaul in the way officers are trained, because “you cannot change behavior and you cannot change culture simply through an email or policy update,” Humphrey said. The plan also calls for millions to be spent on technology upgrades to better track and analyze policing data in real-time.

Where does the DOJ investigation stand?

In late April, Attorney General Merrick Garland announced a DOJ investigation into LMPD to "determine whether LMPD engages in a pattern or practice of violations of the constitution or federal law."

There are four areas of the DOJ’s investigation: whether LMPD engages in discriminatory policing, whether it conducts unreasonable searches, seizures and arrests during traffic stops and in searches of homes, and whether it discriminates against people with disabilities.

Golden said these investigations typically last between 18 and 36 months. He suggested the investigation into LMPD is likely to be on the shorter side because of the department’s level of cooperation, which has included giving investigators access to computer systems and wearable video systems. Investigators have also conducted ride-alongs, spoken to community leaders and met with members of Metro Council.

Once the investigation ends, the DOJ is likely to reach a consent decree imposing accountability steps, policy and training changes, and use of force oversight at LMPD.

The reforms proposed Monday are an attempt to anticipate some of what DOJ will require of LMPD, but Humphrey said they are steps that can and should be taken before the investigation ends.

How much will it cost?

The ballpark figure, which is based on the cost to implement similar reforms in places such as New Orleans and Chicago, is $8 million to $10 million. 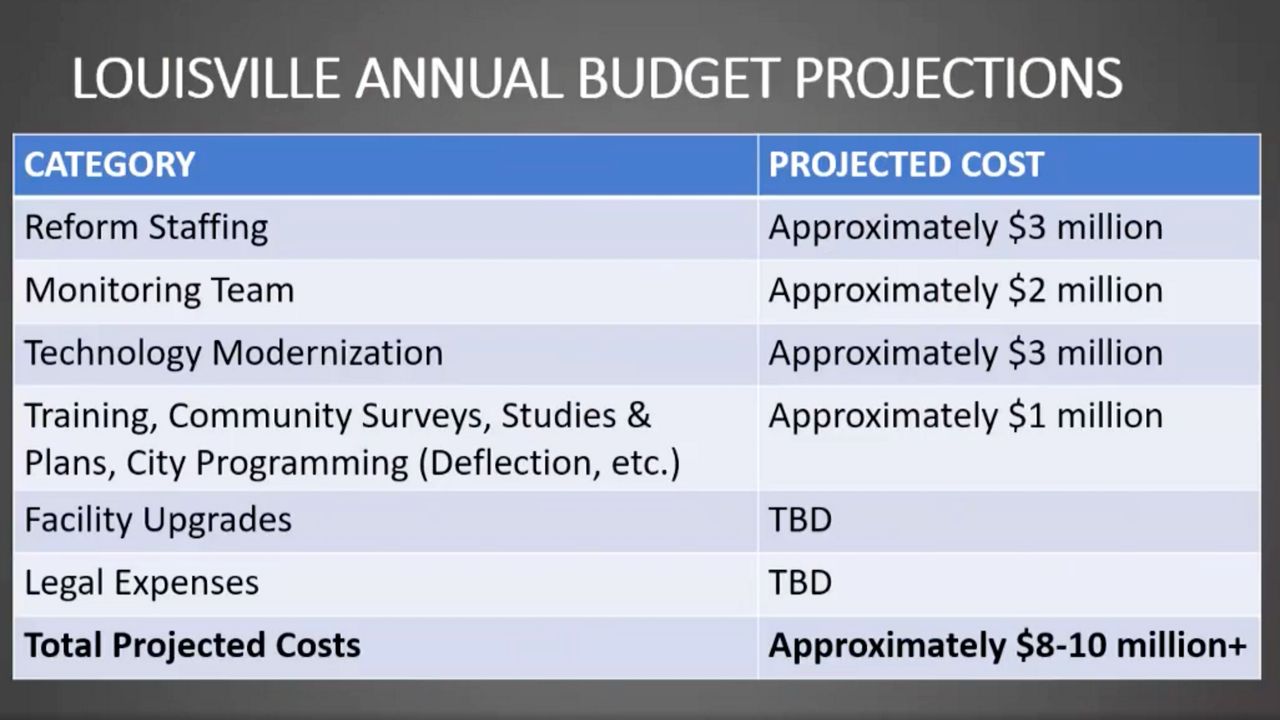 “Taxpayers as usual get sacrificed at the altar of political incompetence and that's precisely what’s going to happen here,” said Councilman Anthony Piagentini (R-District 19). “At the end of the day, the people that elected us are about to take it in the wallet because of a failure of the administration.”

Golden, however, said most of the money could come from the city’s American Rescue Plan funds. The request, he said, will be for $35 million to fund four years of reforms.

“Getting ahead of where we know we’re going to be is a good investment in the police department and ultimately that’s what we’re talking about, investing in accountability,” he said.