LOUISVILLE, Ky. — By the time former Kentucky State Rep. Charles Booker actually said the words “I am running for United States Senate,” the crowd of his supporters at the Kentucky Center for African American Heritage Thursday knew it was coming. But they stood on their feet, waved their signs and raised their voices anyway.

“And not only am I going to run, we’re going to win. We’re going to win this race,” said Booker, who ran last year for the chance to challenge Sen. Mitch McConnell but was beaten in the Democratic primary by Amy McGrath.

Chris Hughes thinks its could be different this time around. “I think he can win by pursuing a strategy where he really does turn out voters who have been disillusioned and voters who have been overlooked,” said Hughes, who was one of several hundreds supporters to brave the rain Thursday.

Booker spoke to those voters in his speech, saying he would go to Washington to “lead for regular people.”

Though he professed love for all those in the room and for everyone across Kentucky, Booker did not shy away from attacking Sen. Rand Paul, the two-term Republican who is up for reelection in 2022. He criticized Paul for “pushing conspiracy theories” related to COVID-19 and accused him of not caring about Kentuckians. 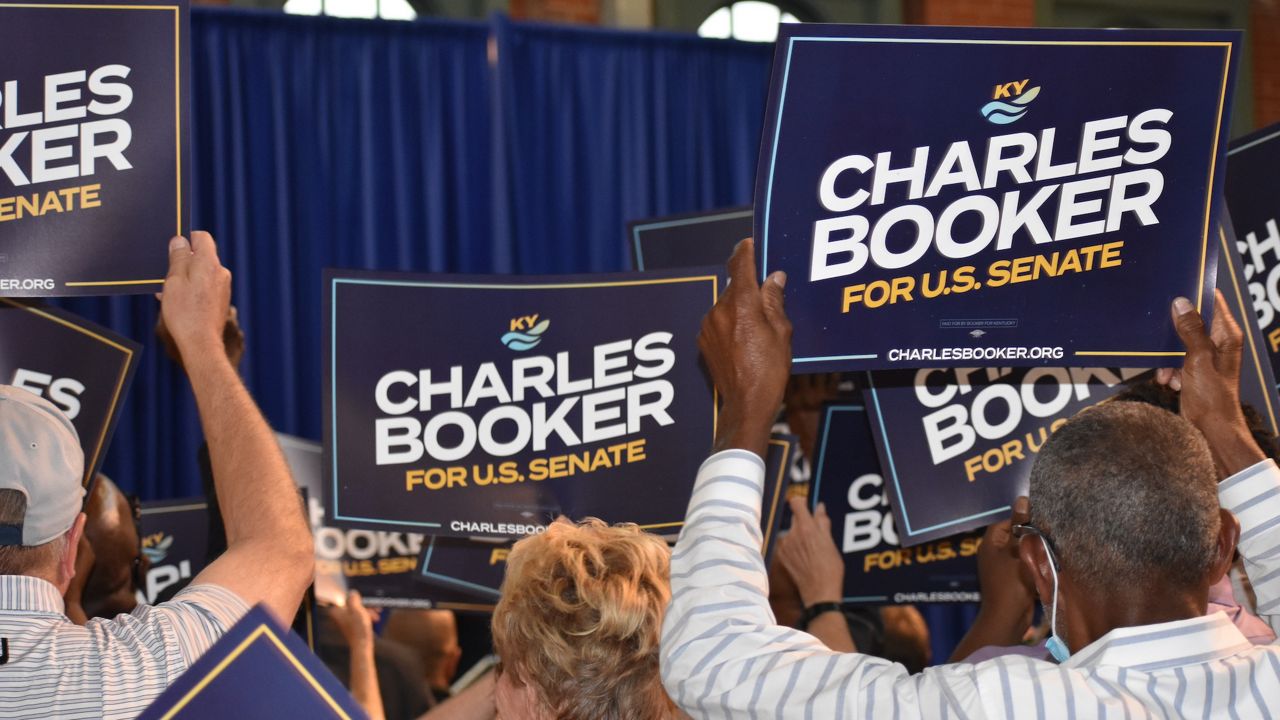 Paul also criticized Booker Thursday, greeting the Democrat's entrance into the race by calling him out of touch with Kentucky. "I think his platform of defunding the police and saying that infrastructure should be reparations for slavery — that taxpayers should somehow have to pay for slavery in the 1840s, or whatever — I think those are ideas and notions that are pretty far out there,” Paul told Spectrum News 1.

The National Republican Senatorial Committee echoed Paul in a statement that called Booker a “socialist” three times. “Kentuckians already know Booker as a proud socialist who wants to defund the police, take away their guns, hike taxes, and destroy jobs all across the Commonwealth with the Green New Deal,” the statement said, highlighting the issues Republicans are likely to stick with through the campaign.

Paula Byrd is hopeful that Booker can change that. The 61-year-old retiree said she supported Booker in his first Senate run and could not have been stopped from joining him for the launch of his second. She believes he could make change in Washington, D.C.

“I’m excited about his tenacity and his love for people,” Byrd said. She said she believes Booker could help revamp, not defund, policing. She also mentioned the growing price of medications. “I have one medication, which is an EpiPen, and that's $700," she said. "Insurance is just extremely high.”

While Booker is better positioned to win the Democratic nomination in 2022 than he was in 2020, he remains a long shot to win the Senate seat that Paul currently occupies. Kentucky has not elected a Democrat to the U.S. Senate since former Gov. Wendell Ford won a third term in 1992.

Experts also take a dim view of Booker’s chances, with the Cook Political Report rating the seat as "Solid Republican."

Booker acknowledged those “doubters” Thursday and responded with defiance. “I know we can do it, Kentucky," he said. "In fact, we will do it and I’m going to tell you right now, we’re going to blow Rand Paul out.”