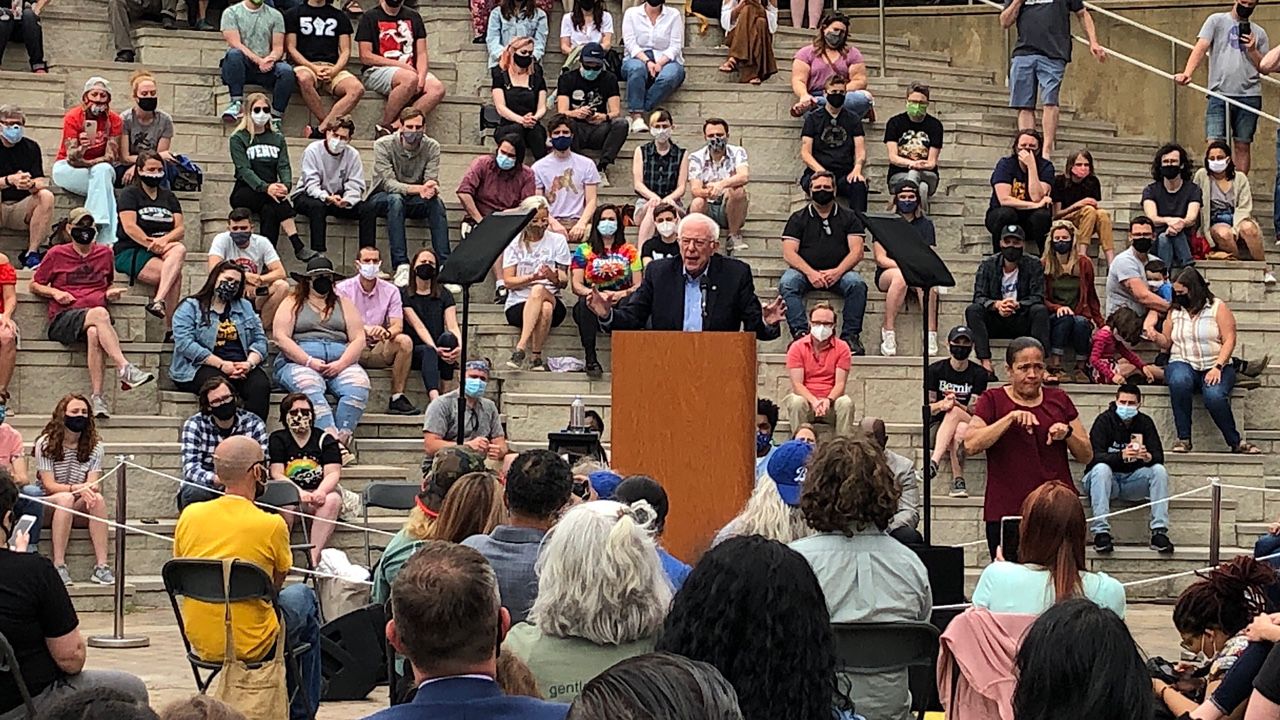 Booker hinted multiple times throughout his speech about running for U.S. Senate in 2022, which would challenge the Republican incumbent Sen. Rand Paul's (R-Ky.) seat. Sanders, however, focused much of his speech attacking U.S. Senate Minority Leader Mitch McConnell (R-Ky.).

“Do you believe that Kentucky can do anything, including sending a young Black man from the hood to Washington to fight for you,” Booker rhetorically asked the hundreds in attendance at Sunday’s rally. It was just one example of the multiple hints the former Kentucky lawmaker dropped at the rally regarding a possible run for U.S. Senate next year.

In March, Booker said he's “strongly considering” a run for the U.S. Senate in 2022 while on Kentucky Educational Television (KET). In April, Booker announced an exploratory committee had been formed, which will test the waters as to whether Booker would be a feasible candidate to run.

While Booker alluded several times that he plans to run in 2022, he made no formal announcement that he will officially challenge Paul’s Senate seat.

Sanders, at the top of his speech, thanked Booker for his grassroots activism. Booker was frequently seen at the Louisville protests in 2020, which made Booker a serious contender in Kentucky’s U.S. Senate Democratic primary race to challenge McConnell’s seat. However, Booker narrowly lost to Amy McGrath.

“And despite being heavily outspent, Charles ran a campaign that the whole country looked at, and I have a feeling that the next time around the results are gonna to be different,” Sanders said.

In 2020, both Sanders and Booker endorsed each other for the respective political seats they each ran for.

However, despite coming to Louisville and hosting the rally with Booker, Sanders didn’t spend much time touting Booker or denouncing his potential opponent Sen. Paul, should Booker decide to run for U.S. Senate next year. Instead, he focused much of his speech attacking McConnell, which Sanders set the tone for within in the first five minutes of his more than 40-minute speech.

“I’m here for a very different and very simple reason. The senior senator from the state of [Kentucky] Mitch McConnell is not just Kentucky’s senator. Until a few months ago, as you all know, he was the majority leader of the United States Senate, and, my God, I am so delighted that today he’s only the minority leader,” Sanders exclaimed. “And by the way, by the way, we owe that to two great Senate candidates in Georgia, and what they did in Georgia you can do in Kentucky.”

Sanders also focused his speech on the progressive’s agenda, such as raising the minimum wage and universal health care.

Sanders, who is now Chairman of the Senate Budget Committee, also focused a lot of attention on promoting the passage of The American Rescue Plan Act of 2021, which provided a $1,400 stimulus check to eligible Americans.

In between listing off progressive priorities, Sanders continued to mention McConnell.

“And let’s just be clear, it’s not just the American Rescue Plan that Mitch McConnell opposed. As we speak, Sen. McConnell is leading the effort against the long-term structural changes that working people in Kentucky and Vermont and throughout our country desperately need,” Sanders said.

After the rally, Spectrum News asked Booker for his thoughts on Sanders spending more time talking about McConnell versus Paul. Booker said it’s a reason Paul shouldn’t be in the Senate.

“And so to have the chair of the budget committee in the Senate come to Kentucky and essentially say to Rand Paul, ‘You do nothing so I’m gonna talk about the one that’s actually, actually showing up,’ even though he is screwing Kentucky because we need to make sure we realize better, it’s really an indictment on Rand Paul,” Booker said.

Booker also told Spectrum News he looks forward to making the announcement of "what’s to come," regarding a potential run for U.S. Senate in 2022, soon. He said that announcement will happen before his wife has their third child, and she is due in August 2021.