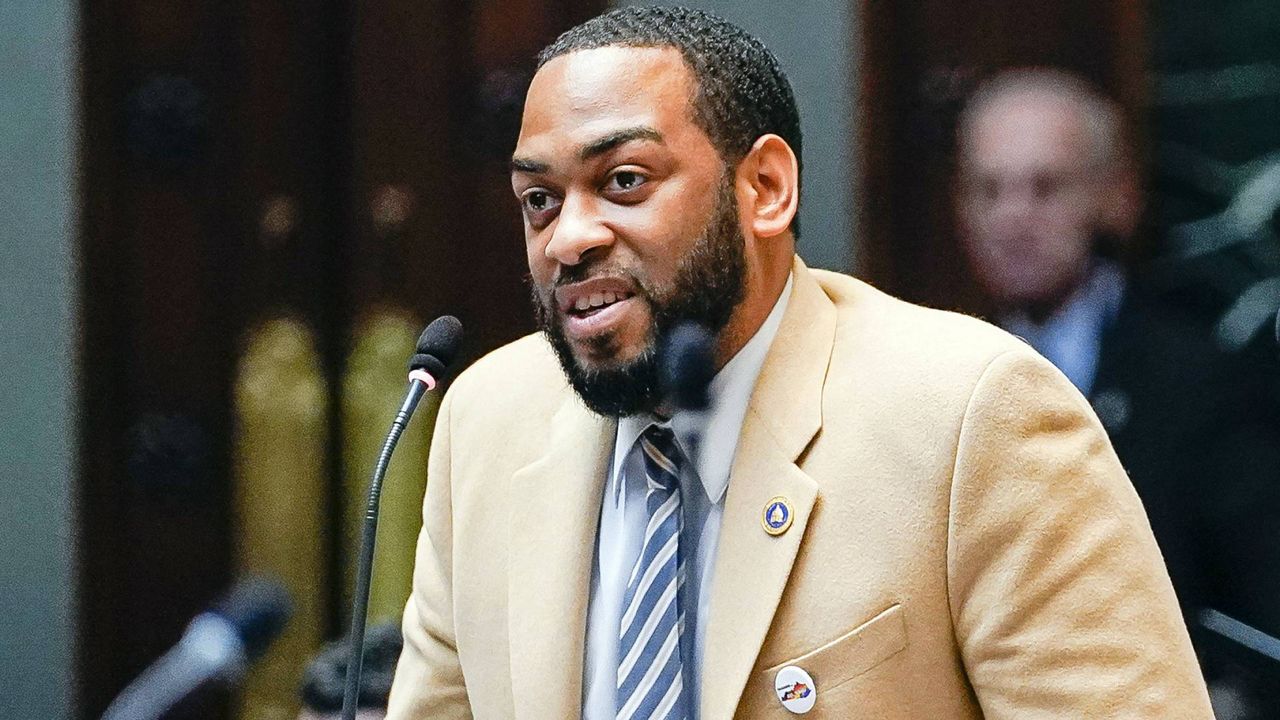 In this Feb. 19, 2020, file photo, state Rep. Charles Booker advocates for the passage of Kentucky HB-12 on the floor of the House of Representatives in the State Capitol in Frankfort, Ky. Democrat Booker, whose unabashedly progressive campaign in Kentucky came up just short in last year's Senate primary, said Monday, April 12, 2021, he's forming an exploratory committee as he weighs a follow-up Senate race in 2022 against Republican incumbent Rand Paul. (AP Photo/Bryan Woolston, File)

WASHINGTON, D.C. — After narrowly losing to Amy McGrath in the Democratic primary last year, former Kentucky State Rep. Charles Booker is considering another run for Senate – this time with an eye on Rand Paul's Senate seat.

Booker announced the formation of an exploratory committee earlier this week. Paul is up for reelection next year.

When asked how he would tailor his message differently from how he targeted Kentucky's senior Senator Mitch McConnell last year, Booker said, "They are very different sides of the same coin."

McConnell, in many ways, is the convenient boogey man for the left but there are some issues where Paul overlaps with progressives: civil liberties, oppposition to war and chipping away at mandatory minimum prison sentences.

"I have made it clear that what we are fighting for as Kentuckians is our future. That’s bigger than any one politician or any one office and the fact of the matter is, regardless of what Rand Paul says on any given week, which is your best guess, on any given time, he’s pissing off Democrats, Republicans, Libertarians because he doesn’t really know who he is from day to day. The fact of the matter is he has done nothing for Kentucky," Booker said.

Building on the work of his grassroots organization "Hood to the Holler," Booker is banking on turning out first-time voters and building unique alliances between the rural poor in Appalachia and people from his community in Louisville.

"Both my parents dropped out of high school. Where I’m from, the West End of Louisville, the hood, it is just a lot of hard work, just trying to get by. A Green New Deal, honestly a Kentucky New Deal, where we lead the way for our future is really important to me," Booker said.

Booker argues generational poverty can't be addressed without a bold policy agenda that includes Medicare for All, a guaranteed income, supporting labor movements with the Protecting the Right to Organize Act and expanding voting rights through the For the People Act.

Paul says Booker's past calls to defund the police will dull his chances in Kentucky.

I just ran into @RandPaul and asked him how he felt about @Booker4KY potentially running against him in 2022. Paul told me, “I don’t have a lot of knowledge of him but it’s probably not going to be very popular being for #defundthepolice in Kentucky.”

When asked if he would describe himself as a Democratic socialist, Booker did not answer directly, saying instead, "I can’t say that I would describe myself any other way than as a hardworking Kentuckian. And even when it comes to the Democratic Party or the Republican Party, at the end of the day, we’ve been getting screwed by all of them. Structural racism is not defined by party."

The Cook Political Report and Sabato's Crystal Ball currently rate Paul's Senate seat as solid Republican but Booker hopes to redefine what is possible in the Commonwealth.

Listen to the full interview with Charles Booker below: