These Ky. Amazon workers see the benefits of joining a union

LOUISVILLE, Ky. — In the four months that Katie Courtney spent working at an Amazon warehouse in Northern Kentucky, she said male co-workers and at least one supervisor tormented her in person and harassed her online. When they ignored her pleas to stop, she prepared a four-page report identifying the nine men who made her miserable.

Courtney remembers being told by the human resources department that her harassers were more valuable to the company than she was. “I turned in my badge that day,” she said. Amazon did not respond to a request for a comment on Courtney's claims.

Over the past several weeks, the 24-year-old has watched closely as Amazon workers in Bessemer, Alabama voted on unionization. She's thought often about how a labor union might have helped her move stations within the warehouse or switch shifts — anything to get her away from the “creeps” working alongside her.

“HR didn’t allow for any of that,” she said.

It may be weeks before it’s clear whether the 5,800 workers in Bessemer voted to join the Retail, Wholesale, and Department Store Union (RWDSU). Voting ended on the last Monday in March and ballots are still being counted. If the effort succeeds, it will mark the first time an Amazon warehouse in the U.S. has unionized. Others would likely follow, with success in Bessemer predicted to spark similar unionization drives at the more than 230 Amazon warehouses across the country. 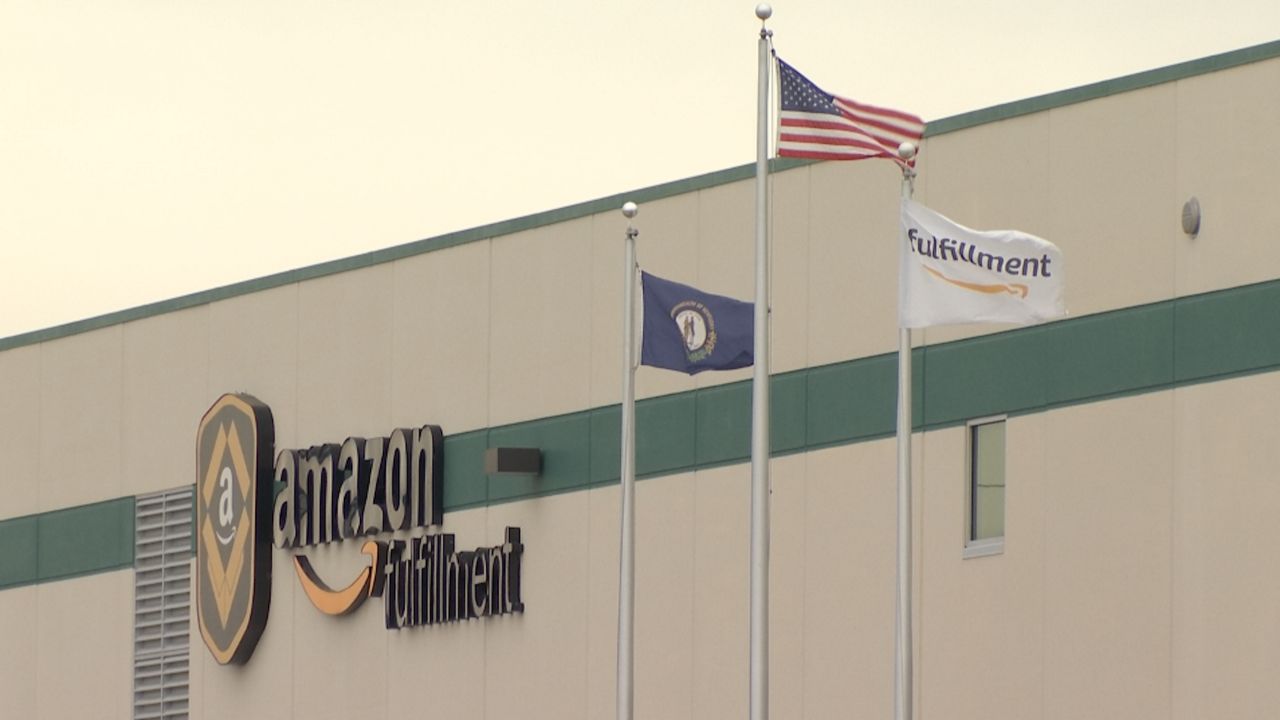 Amazon has 10 facilities and more than 18,000 employees in Kentucky.

Ten of those facilities are located in Kentucky, where Amazon employs upwards of 18,000 people. In interviews with Spectrum News 1, several of those employees and others who previously worked for Amazon, expressed their support for the unionization effort in Bessemer. They discussed the physical and mental effects of aggressive production goals and the frustrations of feeling voiceless.

Amazon spokesperson Maria Boschetti said unionization is not necessary because "Amazon already offers what these groups are requesting: industry-leading pay, comprehensive benefits from the first day on the job, opportunities for career growth, all while working in a safe, modern, and inclusive work environment."

The current and former workers acknowledged some of these perks. They credited the richest company in the world for paying high wages and providing unmatched healthcare benefits. Still, they said having a union on their side would improve their jobs. Or their old job, in Courtney’s case.

“A union would have fought for me — not the company,” she said.

The push to unionize the 885,00-square-foot fulfillment center in Bessemer started with an email. Last summer, Daryl Richardson reached out to the RWDSU with a six-word message: “How do I go about organizing?”

That email set into motion a series of events that culminated in last Monday’s deadline for workers to vote on unionization. The campaign pitted employees against employer, and other employees. It attracted the attention of major political figures, including President Joseph Biden and Sen. Bernie Sanders, who both endorsed the unionization effort.

Workers at one Amazon warehouse in Shepherdsville have been paying attention. A 19-year-old, who works there and requested anonymity to speak about the company, said he’s had discussions with co-workers about the benefits of unionization in recent weeks. Some, like him, support the effort. Others are opposed, he said, "because they don’t think that union really does that much."

After working at UPS, he joined Amazon as a stower, a physically demanding position that involves packing boxes filled with products into a larger box that’s placed on a truck for home delivery.

“When I first started, my feet would hurt bad,” he said. “I'd come home with calluses. The soreness went away after a while, but you'd still be expected to hit these absurd rates.” He said he's required to pack 320 packages every hour.

“I'm pretty young and I can keep up,” he said. “But I know a lot of older people — they're always at risk when they have to stow. There's a lot of stress that comes with that.”

Another Amazon employee who spoke on the condition of anonymity because he feared retaliation for publicly supporting unions, said he can relate to the stress of meeting Amazon's production goals.

“It's a very overwhelming feeling, especially if there's no one to help you. You really can't do anything about it besides just work through it,” he said. “I've wanted to break down multiple times because of how stressful it is."

When he started his job last August, he said he was confronted with a shocking example of just how demanding the job can be — a water bottle that a co-worker had urinated in.

“It’s very fast paced,” he said. “You don’t have time to do anything.”

Amazon spokesperson Mary Boschetti said that while the company takes "every individual’s experience seriously," they do not "believe these anecdotes reflect the experience of the vast majority of our employees" who work in the fulfillment centers. She said employees are free to "take breaks at any time to use the restroom, grab water or a snack, or speak to their coworkers, manager or other support staff."

A voice for the workers

One of the current Amazon workers acknowledged that, despite his issues with the company, he is well paid. Courtney, who left Amazon several years ago, said she’s been tempted to return to the company because of its wages.

“The pay is very enticing and so is the four-day work week,” she said. “But it’s a terrible environment to be in.”

Along with its wages, Amazon touts its benefits package as a reason employees don’t need a union.

That was a part of working for the company that Matt Browning appreciated. The 33-year-old spent three years at Amazon, working his way up to what he called “lower tier management,” before leaving last summer.

“I would not have been there as long as I was if it had been for the benefits,” he said, praising the company’s generous coverage of fertility treatments in particular.

Despite his advancement at Amazon, Browning said he never felt like he had a voice in decisions made around him. Like at the beginning of the pandemic, when he was “freaking out” about COVID-19 but still expected to report to work.

Boschetti insisted that Amazon encourages employees to communicate with leadership. "Direct dialogue is essential to our work environment in which we encourage employees to bring their comments, questions, and concerns directly to their management team," she said.

One of the current Amazon employees, who spoke to Spectrum News 1, said leadership doesn’t always listen to safety concerns. “Because of how heavy the boxes are, our equipment often breaks,” he said. “I’ve been hit in the face with boxes.”

"The health and safety of our employees is our number one priority,” Boschetti said, citing company investments in safety training and technology. "While any incident is one too many, we are continuously learning and improving our programs to prevent future incidents."

A management that listened to concerns, the employee said, could fix these problems could. He sees representation from a union as one way to make that happen.

“I would hope that a labor union would help the workers and the management have more communication,” he said. “Ninety percent of our problems would be solved if management actually cared about what the workers had to say.”