When Larry Johnson started as a bellman at the Seelbach Hotel, he didn't know much about the Lady in Blue. Now, he shares decades of information about her mysterious death. (Spectrum News 1/Ashley N. Brown)

Who was the Seelbach Hotel's 'Lady in Blue?' Ask Larry Johnson

LOUISVILLE, Ky. — The Seelbach Hotel is swelled with 116 years of history, and there are multiple accounts of current guests spotting ghoulish guests whose spirits still roam the building.

One of the historic Louisville hotel’s most infamous ghost stories is that of the “Lady in Blue.” 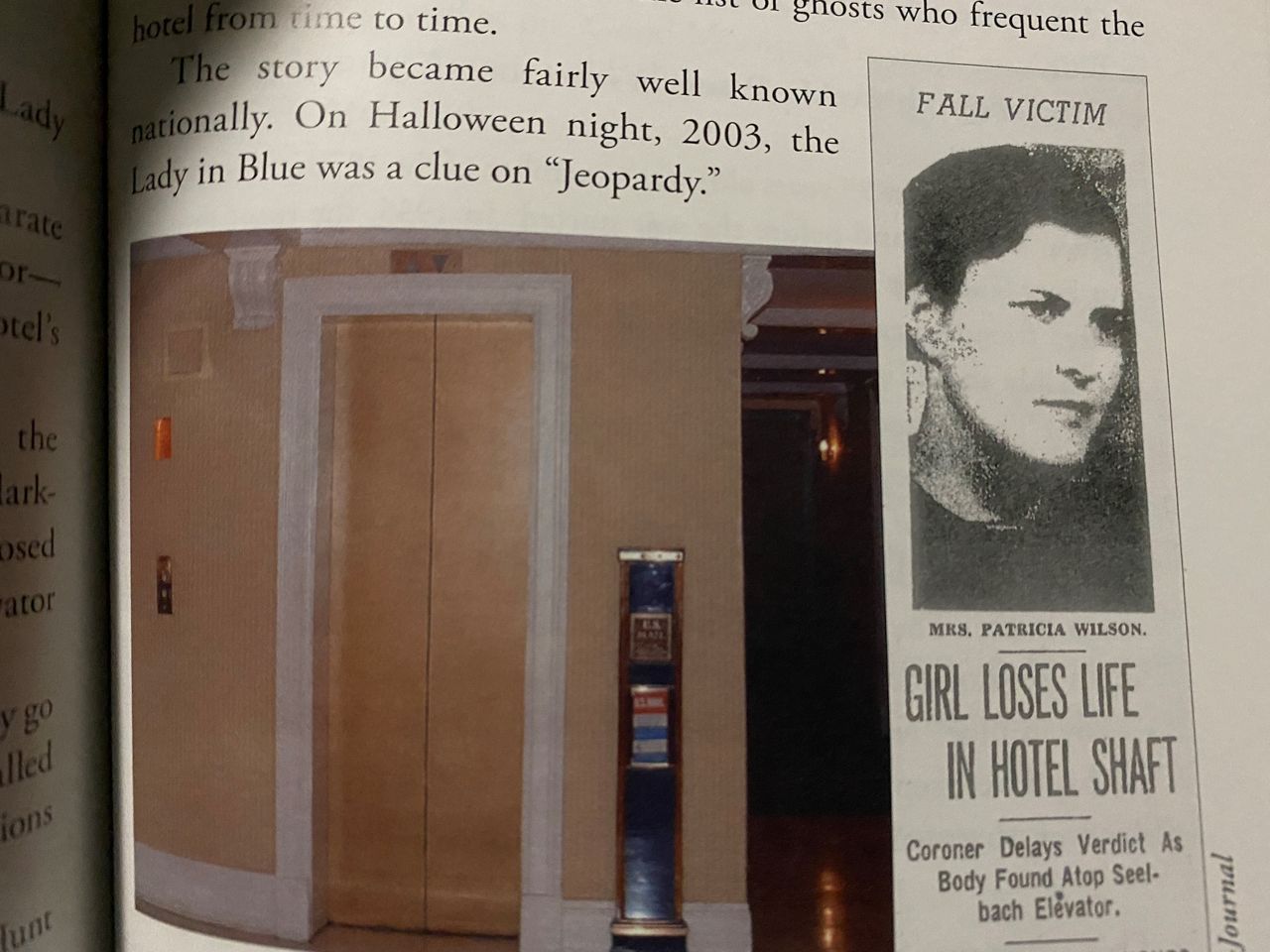 There have been multiple reports of people seeing a woman with long dark hair wearing a long blue dress near the same elevator. (Spectrum News 1/Ashley N. Brown)

On July 16, 1936, 24-year-old Patricia Wilson was found in one of the hotel’s elevator shafts wearing a long blue dress with long dark hair. A newspaper report listed her death as a suicide or accident.

Larry Johnson, the hotel historian, joined the Seelbach team as a bellman in 1982. In his book, “The Seelbach: A Centennial Salute to Louisville’s Grand Hotel,” Johnson covers the stories of the hotel since its opening in 1905.

He gathered information from news articles, books and people over his 40-year career at the hotel.

Over time, he grew interested in learning, researching, and sharing Wilson’s story.

“It's about a young lady that had a rough life. For some unknown reason, she moved from Oklahoma, with a young gentleman by the name of Wilson, who was a traveling salesman,” Johnson said. “She ended up being left and loyal by herself. The only way she could make a living was being a lady of the evening.”

The thing he has done longer than being alive and married to his wife is digging into the mysterious death. There have been reports of a lady in blue roaming the floors of the hotels decades after her death.

You can find Johnson's video about the Lady in Blue here. 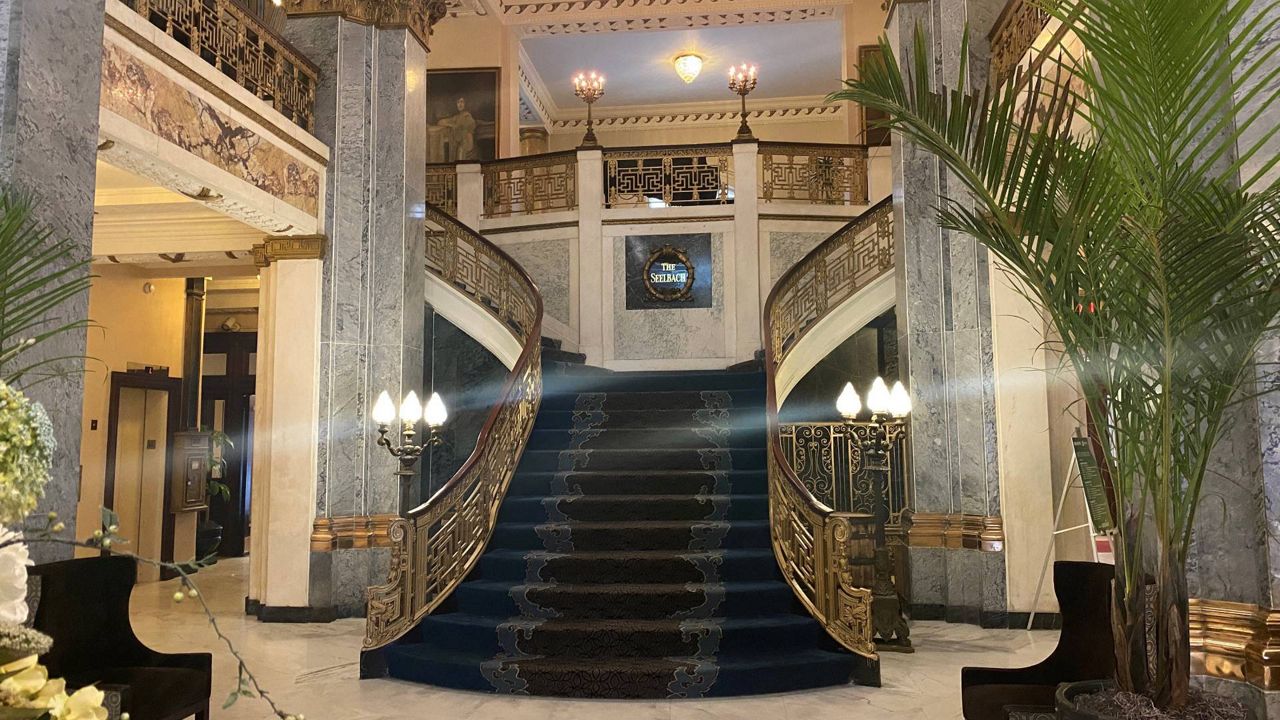 The Seelbach Hotel opened in 1905. Many historical figures including government leaders, athletes, authors and celebrities have stayed at or visited the hotel. (Spectrum News 1/Ashley N. Brown)

In 1987, a hotel cook named James Scott was making waffles and omelets for Sunday brunch when he saw a young woman with long dark hair wearing a long blue dress walk in an elevator and disappear.

“He told the chef what he had seen and the chef sort of laughed at him and said what's so bad about a lady walking in the elevator. He said, 'You don't understand. The doors were closed and she walked through the doors,'” Johnson said.

The doors of the elevator were pried open but nothing suspicious was found.

Before the security guard could file the report, a housekeeper came in saying she saw a woman in blue walk into that same broken elevator on the 8th floor.

Just eight years ago, Johnson found articles from a 1955 True Detective magazine with information uncovering a new theory of what happened to Patricia Wilson on July 15, 1936.

Rumor has it that in 1936, General Henry Denhardt was down on his luck. A guest on the 8th floor heard an argument and went out of his room and found the general arguing with a young woman.

“He closed the door and a few minutes later, he heard a loud noise and a woman screaming,” Johnson said.

The guest said when he opened the door again, he saw the general running toward the same elevator Patricia Wilson was seen in 1987.

Some believe Wilson was working in the hotel and the general was unable to pay her, which lead to the fight.

“The guest of the hotel had told the police what he saw, but it wasn't enough proof to say that the general had pushed her down the elevator shaft so he more or less got away with it,” Johnson explained. “So she was left to roam the hallways trying to seek a way to get out. As stories, I’ve heard about the paranormal if a person is murdered or some there’s some untimely death they don't leave the property until they're resting at peace.”

Johnson believes the sighting of the ‘Lady in Blue’ was Wilson trying to escape the hotel, and the only way to do so was to prove she didn’t kill herself.

“I think she's still here. I think she's resting in peace now. I think there may be people that might feel her walking down the hallway one night,” says Johnson. “They might even feel her breathing down their neck. She's very peaceful at peace now and I don't think she'll ever be seen again."

Johnson discovered Wilson’s real name, Pearl Elliot, and where she is buried. He and his wife leave flowers at her grave site on holidays.

While researching, Johnson discovered the general was engaged to a woman named Verna Garr Taylor who heard rumors about suspicions of him killing Patricia.

On a shopping trip, the couple got into an argument and the general pulled the car off the side of the road.

Taylor got out of the car and started to walk and the general followed her and shot her to death.

“What he didn't realize was he was in front of a farmer's house. The farmer came down, and the first words out of the general’s mouth were, 'I think my fiance committed suicide,'” Johnson said.

Johnson found reports that during the course of the trial, the general was living in a hotel in Shelbyville, Kentucky. One night he was standing on the steps of the hotel with his lawyer and a couple of Verna gar Taylor's brothers walked up to him and shot him to death. He says the brothers got away with mental incompetence.