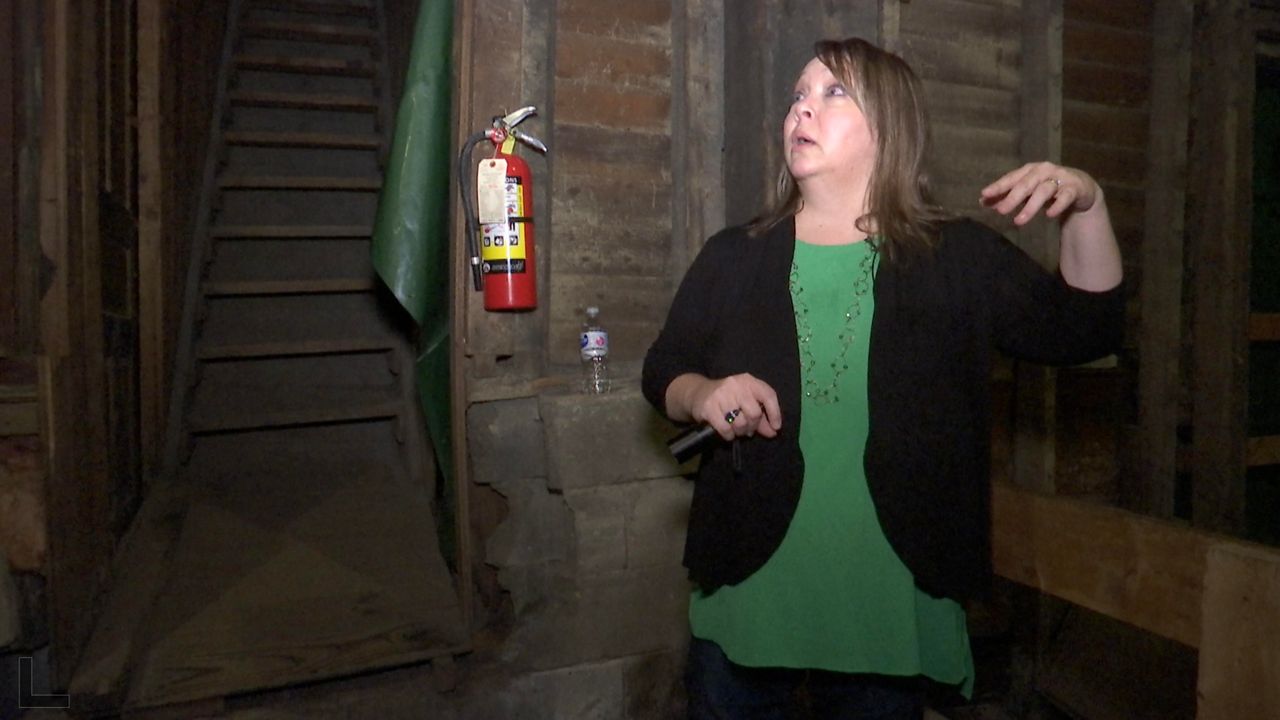 WILDER, Ky. — Just driving by Bobby Mackey’s on Licking Pike in Wilder, Kentucky, it would be hard to guess it’s one of the most reportedly haunted nightclubs in the country.

Bobby Mackey bought the building in 1978, converting it into one of the only country dance clubs in the area. On Friday and Saturday nights, people come to dance and listen to Mackey’s band play. They also take haunted tours.

To understand why the “haunted honky-tonk” has earned its reputation, Spectrum News 1 took an exclusive tour of the building with Angie Johnson of Gatekeeper Paranormal, who’s been doing tours there since 2012. She explained the building was once an upscaled dinner club casino, with possible mob connections.

“The mob actually purchased this property in the early 1900s. And even into the 50s and 60s, and there’s some rumors that even today, that there’s some of that activity,” she said. 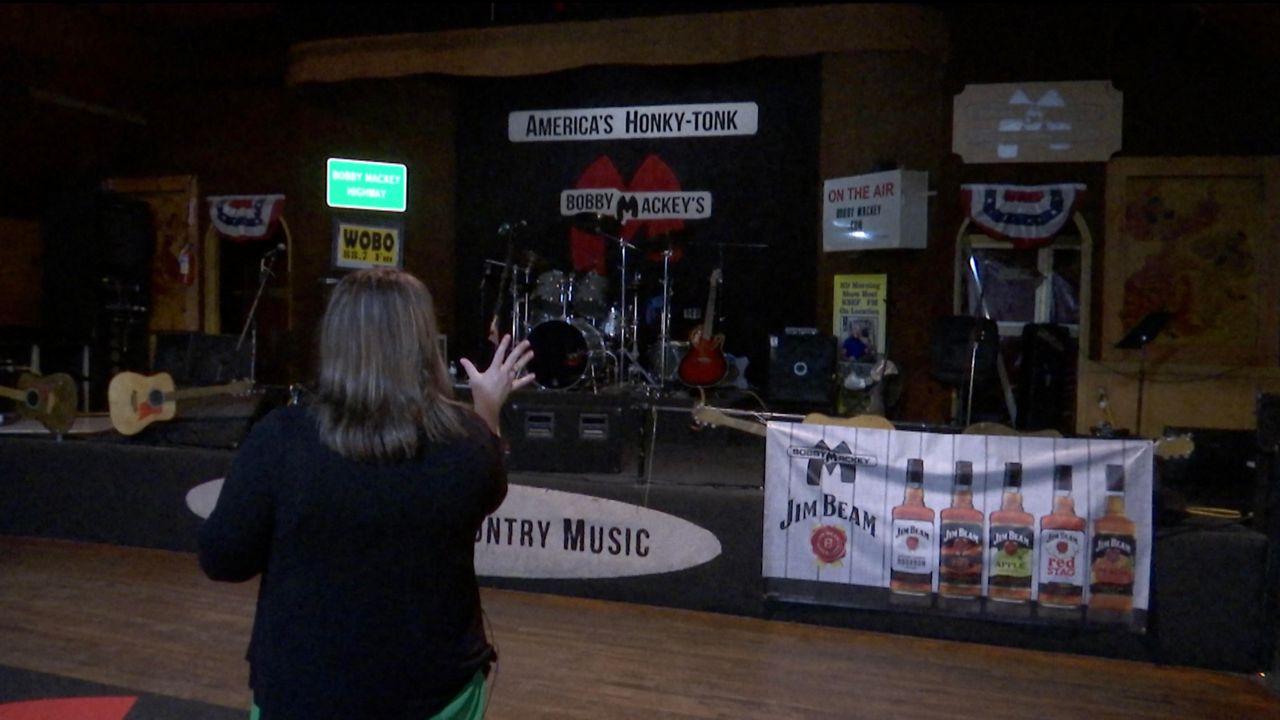 “And there’s been many times where we have heard what sounds like heavy footsteps back behind stage,” Angie Johnson said. “We often will hear heavy footsteps on the dance floor. We’ll even hear chairs scooting.” (Spectrum News 1/Sam Knef)

She said people come from across the country to perform rituals in the club. Those things, combined with other urban legends, have made Bobby Mackey’s a hot bed for people seeing and hearing paranormal activity.

One story is the murder of Pearl Bryan in 1896. As Johnson explained, Bryan’s body was found in a plot of land near where Bobby Mackey’s currently exists. She was decapitated, reportedly killed by her boyfriend who wanted her to get an abortion. Some people believe Bryan’s boyfriend and his friend disposed of her head on the Bobby Mackey’s property, which is believed to be adjacent to what was once a slaughterhouse, to conceal her identity.

“These two gentlemen said they disposed of her head in the well of the slaughterhouse. And a lot of people think that it may have been on this property. But some of the research we have done suggests that maybe it was not,” Johnson said.

Bryan is one of the many ghosts people have reported seeing or hearing in the club. Johnson said she is a skeptic herself.

“99% of the time, there is usually a scientific explanation for what we are experiencing. There’s just that 1% that you can’t explain,” Johnson said.

She went into some of the specific reported sightings and hearings.

People have reported seeing shadowy figures around the bar area, hearing male conversations near what used to be a male restroom, and blue orbs of light forming near the dance floor. In an area of the club called the “The Monster Room,” Johnson recalled an encounter.

“We’ve actually had some females say that when they’ve sat here during investigations, that they feel like they were inappropriately touched or groped in this area,” Johnson said, sitting at the bar. 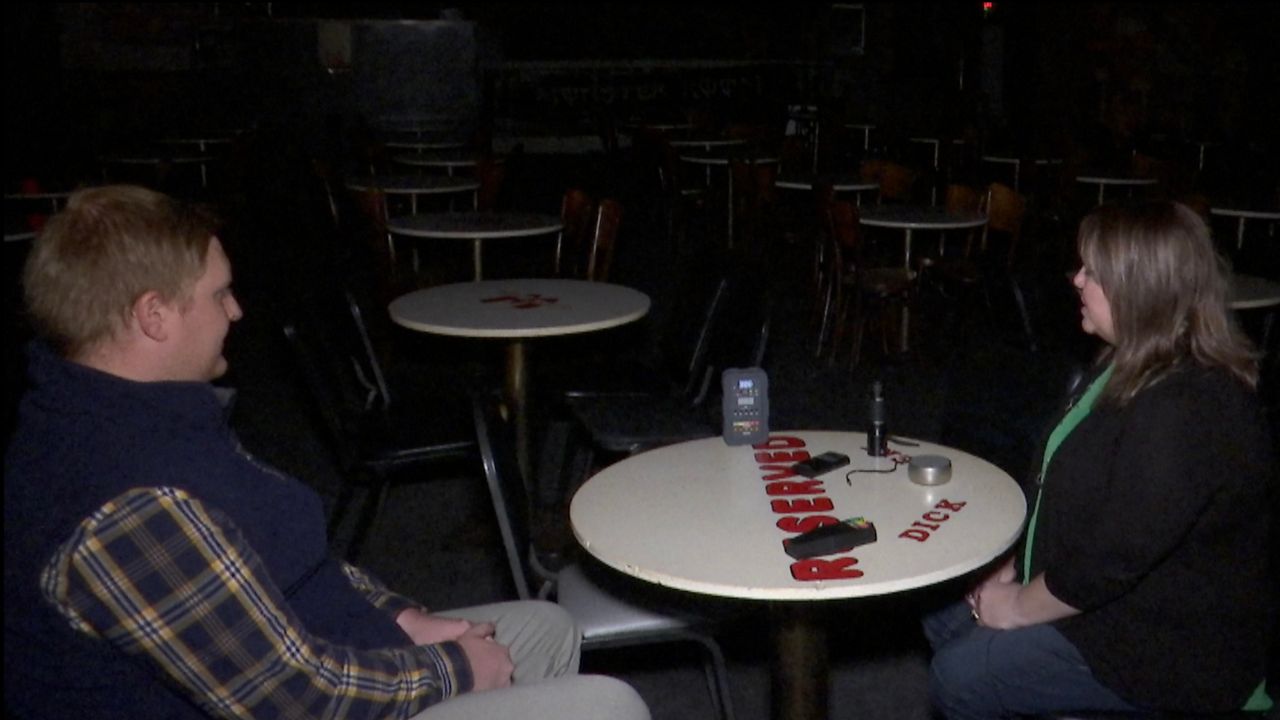 At the end of the tour, Angie Johnson tried to communicate with any present spirits, to no avail.(Spectrum News 1/Sam Knef)

“A lot of people claim that they’ll feel what feels like a cat rubbing up against their legs,” Johnson said. “And I’ve actually felt that several times myself.”

One of the more frightening sightings was experienced by Johnson’s fellow Gatekeeper Paranormal tour guide, Laura Roland, in what they call the “creepy corner.”

“There’s a young man that was leaning up against this pool table. And she described him to perfect detail,” Johnson said. “He’s there one second, and the next he’s gone.”

Johnson said she personally has seen a lot of these things. One time, she was in the creepy corner with a Catholic priest.

“One of the lights above the pool table started to flicker very quickly, and then it stopped. The electricity was off back here. And he all of a sudden got very ill, very sick,” she said.

Several times during the tour, Johnson paused after saying she’d heard something.

She attributes a lot of the encounters to Carl Lawson, the old caretaker who used to live upstairs above the club, who passed away in recent years. People have reported seeing Lawson in pictures they’ve taken at the club.

Lawson, as Johnson described, had plenty of his own disturbing encounters.

“He was bathing, taking a bath, and he felt two hands grab his shoulders and try to push him under,” she said, pointing to Carl’s old bathtub.

“There was an exorcism performed on him up here in this area.”

While the upstairs was creepy enough, Johnson then led the way down to what many consider to be the ‘main event,’ the basement.

“And here is what people refer to as the portal to hell, hell’s gate,” she said, referencing a well in the basement. “We’ve had things thrown at people in here. Nothing violent. Just like little pebbles to get your attention.”

The most convincing piece of evidence that the building is indeed haunted came while Johnson was talking about a staircase leading up to what used to be a trap door on the main floor.

An audible thud seemed to come from directly above on the main floor, which, at the time, was not occupied by a single person. No one alive, at least.

“Did you hear that? That’s upstairs,” Johnson said.

The tour proceeded to what looks like a prison cell, which Johnson said was at one time a torture chamber of sorts. It’s a small room with enough space to sit down, and not much else. She said it was used for people caught cheating or stealing.

“I have watched grown men in here just panic, and run out,” Johnson said. She recalled one memorable instance. “You could see three scratch marks start at his ankle and come all the way up across his shin to his knee.”

Next up was the wall of faces, where water stains on a concrete wall appear to take the shape of faces ranging from goofy-looking, to downright spooky, depending on the perspective of the person looking at them.

At the end of the tour, Johnson tried to communicate with any present spirits, to no avail.

But anyone wanting their chance at seeing something that might just send shivers to their spine has a good option in Bobby Mackey’s.