The Old Capitol Building in Frankfort is believed to be one of the most haunted places in Kentucky. (Brandon Roberts/Spectrum News 1)

FRANKFORT, Ky. — Kentucky’s haunted history has been well-documented, and the commonwealth’s Old Capitol Building in downtown Frankfort is notorious for its ghostly lore.


The building is a National Historic Landmark that served as Kentucky’s Capitol building from 1830 to 1910, and its dramatic history as the setting for lively political debates as lawmakers grappled with pressing and polarizing issues such as slavery and war, along with its gothic architecture, has long invited rumors of nefarious and otherworldly activity.

In the drawers of the desks in the room that once housed Kentucky’s House of Representatives is a photocopy of House Bill 36 from Sept. 12, 1861, the legislation that officially made Kentucky part of the Union during the Civil War. An unknown member of the house scribbled “The Bloody Bill” across the top.

“You can get an idea of the bloodshed that would happen once Kentucky joined the union,” said Greg Hardison, creative engagement specialist with the Kentucky Historical Society. “Many Kentuckians still joined the Confederacy. There was a lot of trouble after that. Whoever wrote that across the top knew this bill was going to create real bloodshed.”

Over the next year, Confederate forces invaded Kentucky. They took control of the Old Capitol Building, using it as a barracks a couple of weeks before Perryville, which was the bloodiest battle in Kentucky.

The Old Capitol Building was designed by Gideon Shryock, Kentucky’s first native-born and professionally trained architect — the building was the third to serve as Kentucky’s seat of government after the first two, both made of wood, burned down. The building has been restored to how it looked in the early 1850s and contains décor and features original to that time. Despite the renovations, the building still has many signs of the past that aids in it being considered one of the most haunted places in Kentucky.

The building was the state Capitol during one of the more contentious times in Kentucky history when the violence surrounding the 1900 gubernatorial election and subsequent assassination of Gov. William Goebel left the commonwealth on the brink of a Civil War. As a result, ghost stories abound. 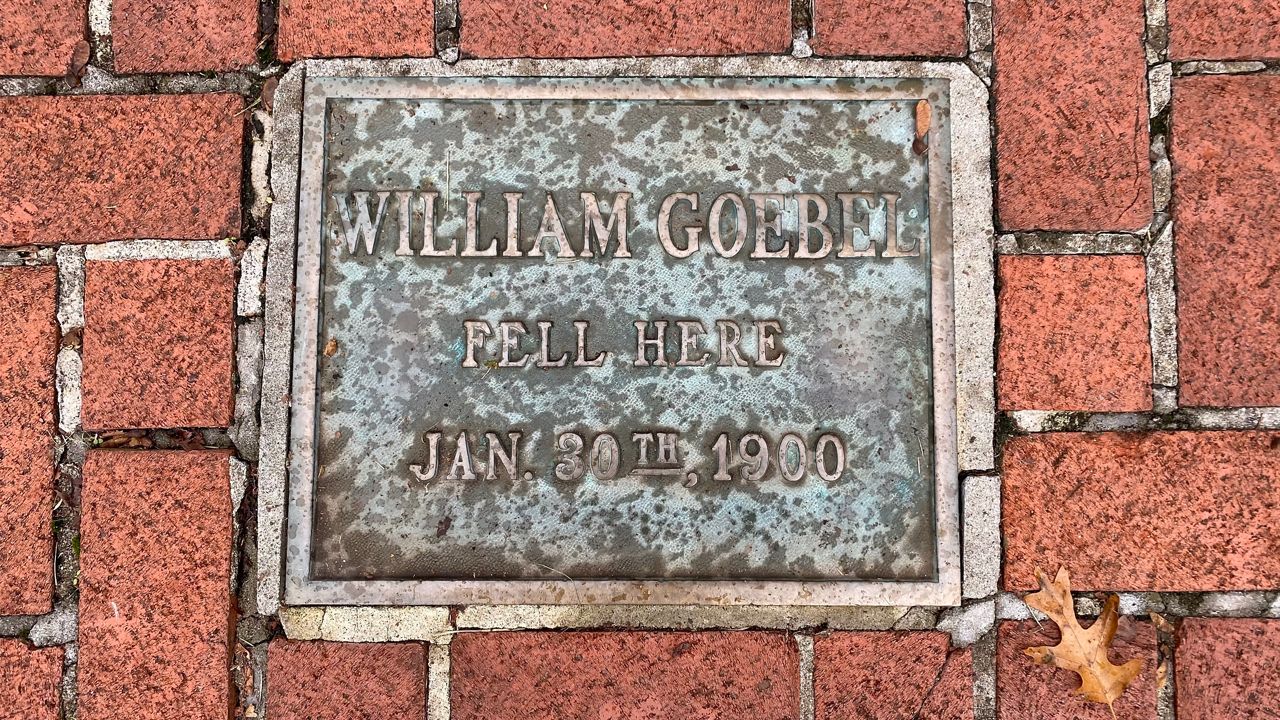 A plaque on the ground in front of the Old Capitol Building in Frankfort marks where Kentucky Gov. William Goebel collapsed and died after being shot. (Brandon Roberts/Spectrum News 1)

“Gov. Goebel was assassinated just outside of this building 122 years ago as he was walking into the building,” Hardison said. “There was a big political debate that year between the different parties, and he had lost. He was walking up to see if the votes were being recounted and what the result was when he was shot.”

Mysterious shots have been reportedly heard in the small building at the rear of the Old Capitol building, used as an arsenal for war artifacts. In addition, a mahogany veneer chest in the building known as the “Conjure Chest” is said to be cursed. As many as 18 untimely deaths have been attributed to this piece of furniture, and the presence of these unfortunate souls is rumored to be felt throughout the grounds.

“The chest was built by an African-American man who was a slave, and the story goes that his family cursed the chest so anybody that owned it after that and put clothing in the drawers would die,” Hardison said. There are 18 deaths directly documented from that piece of furniture that is attributed to that curse. That’s why it's called the Conjure Chest.” 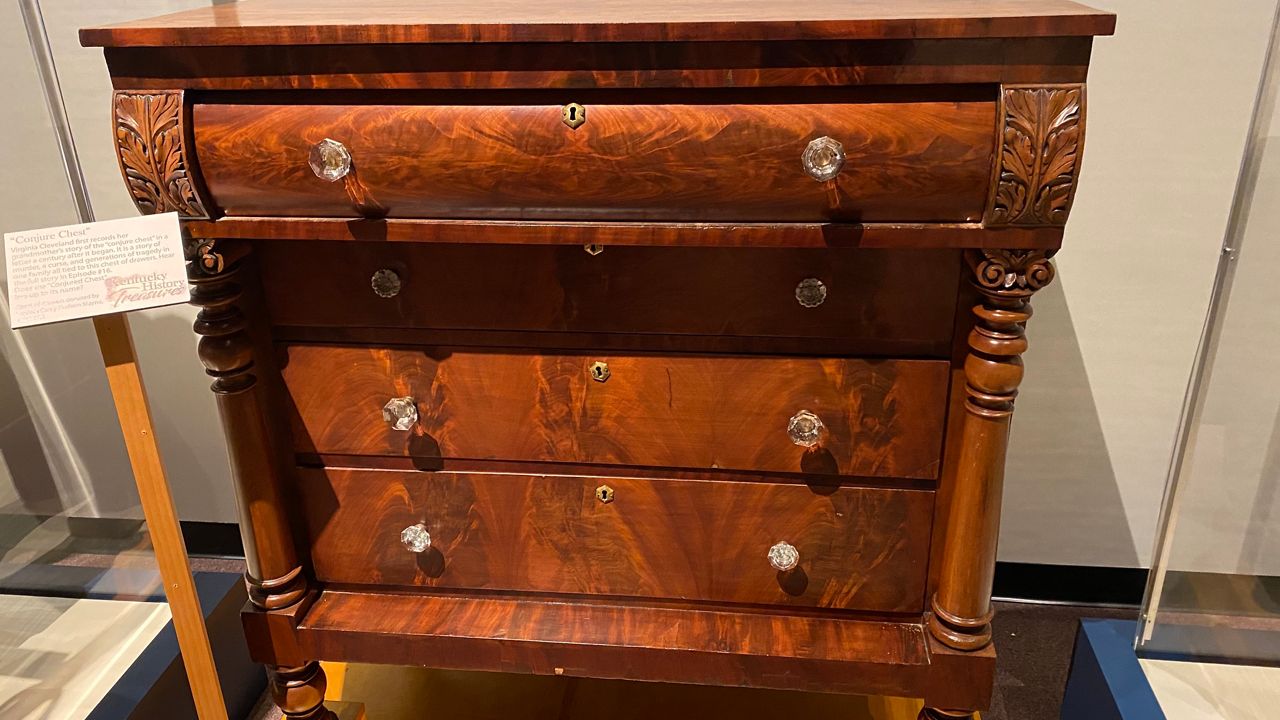 The deaths of 18 people are tied to this piece of furniture. Known as the "Conjure Chest," it is was once rumored to be cursed. (Brandon Roberts/Spectrum News 1)

Hardison thinks the furniture in the Old Capitol Building promotes the rumor that it is haunted.

“Imagine some of the discussions and debates and decisions made at those desks — they caused death. You can imagine the debate, the anger, the frustration and those types of things being stored in the history of this building.”

There are many accounts of strange occurrences that have promoted the rumor of the building being haunted. Hardison said a few years ago, on the anniversary of Gov. Goebel’s assassination, a security guard witnessed his portrait suddenly fall off the wall. Hardison also said he had been in the building alone and thought he heard voices.

“Hearing the voices is my only personal experience,” Hardison said. “I swore I heard voices and couldn't find anyone else in here. I walked around the building and kept hearing the voices change and move. I never found anything.”

The “Haunted by History: Nighttime Tour of the Old State Capitol” from 7-8 p.m. Oct. 29-30 is sold out, but the building is open for self-guided tours from 10 a.m.-5 p.m. Tuesday through Saturday.

“We have offered a haunted tour of this building, Liberty Hall and a Buffalo Trace combined,” Hardison said. “We did that for a couple of years, and then that changed. We've done various things over the years.”