CINCINNATI — When people talk about BLINK, they’re quick to get wrapped up in the massive numbers associated with the unique art and light festival.

They’ll mention the 1.3 million people expected to venture to downtown Cincinnati and Covington, Ky. over the course of the four-night show.

In 2019, BLINK had an $86.7 million impact on the greater Cincinnati region. Organizers project attendance to be similar this year.

But for Andrew Salzbrun — BLINK’s executive creative director — the festival’s impact is more significant than money or attendance. He sees the event as a long-term investment in the city’s ongoing resurgence.

“We are creating opportunities for people to explore and see world-class public art right here in Cincinnati,” said Salzbrun, who’s been a part of BLINK since its inception back in 2017. “We really want people to engage in conversation about the experience with the art and the various spaces.”


This year’s rendition of BLINK includes more than 100 works of art, ranging from animated murals and colorful sculptures to laser shows and projections on the sides of buildings.

The pieces are scattered across 30 city blocks. They can be found in parks, plazas, and alleyways in the heart of various entertainment districts, but they’re also found in empty lots, vacant properties and areas still struggling from years of disinvestment.

Organizers intentionally stretched the festival’s footprint further north-south and east-west than in previous years to provide an incentive for people to explore more of the area, Salzbrun said.

Through BLINK, Salzbrun hopes residents and out-of-town guests will begin to view those spaces in a new light.

“It’s really about highlighting all the corners of Cincinnati,” he added. “We want to showcase that if you look beneath the veneer, you can find some true hidden gems all over the city.”

‘Blown away’ by city’s transformation

John Walter, 68, spent Thursday night traversing all over downtown and Covington for BLINK’s opening. He loved the parade down Fifth Street, but he was “blown away” with the energy on Court Street with the Asian Night Market and the pop-up moon-lit roller skating rink.

“It’s miraculous how much Court Street has changed over the last couple of years,” he said. “Just thinking back a few years, there was no energy on Court Street and now it’s just full of life.” 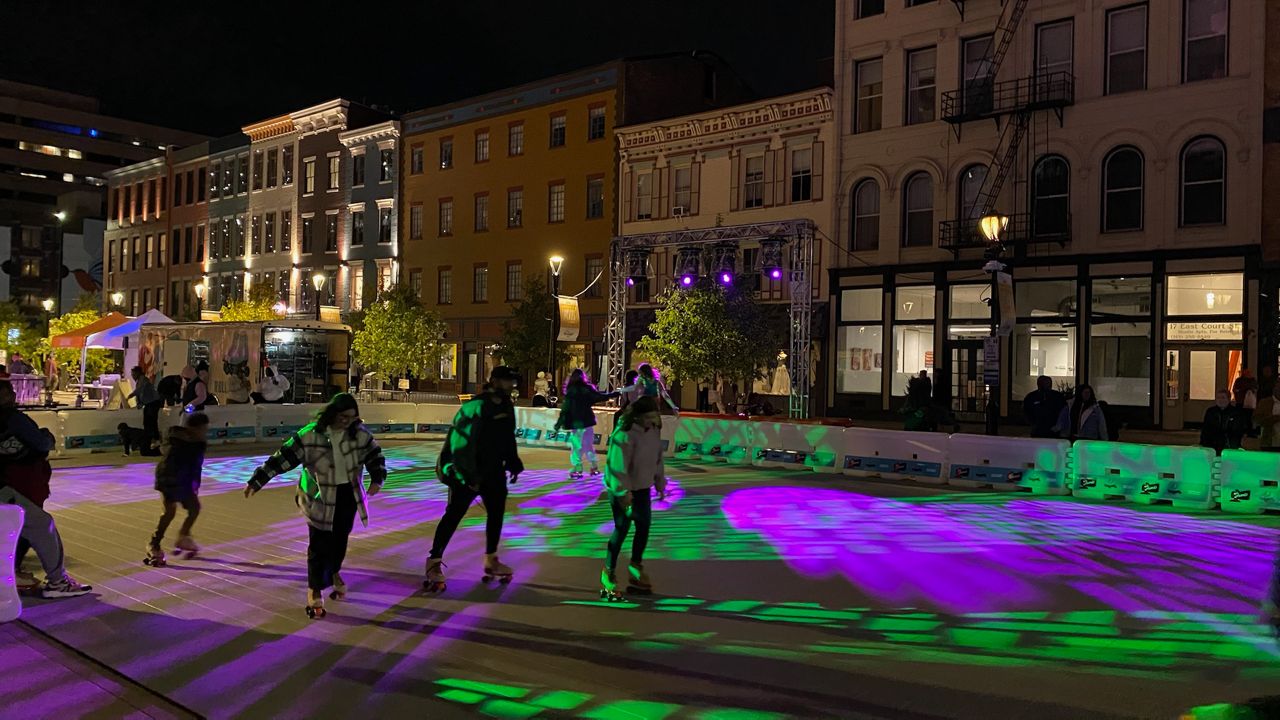 Walter and his wife plan to do it all again over the weekend. They’ll be joined by another couple and their two young children.

“I have very sore feet today, but I’m excited for the next three nights,” Walter said Friday with a smile on his face. “This is one of the best ways to really explore my city and I wouldn’t miss it.”

BLINK has had a transformative effect on Cincinnati’s Over-the-Rhine neighborhood, Salzbrun said.

Including this year, there’ve been 43 murals and permanent pieces of public art installed for BLINK. But while murals are positioned on prominent streets and sleepy corners across the urban core, BLINK organizers have placed an emphasis on the Findlay Market District in northern OTR.

There’s a large cluster of murals within a five-block radius of the market.

Of the 17 murals created for this year’s event, all but one is in OTR. The other is Tristan Eaton’s larger-than-life piece on the side of 84.51 headquarters in the Central Business District.

“The goal of the BLINK mural program has always been to turn the Findlay Market District into one of the greatest collections of international public street art in the world,” Salzbrun said. “We’ve been really cognizant about making sure that we recruit and bring in the best talent and to keep the collection fresh.”

Martin had been to Cincinnati once before, several years ago, when artist Mark Dejong was working on the Swing House. She called the trip “inspiring.” 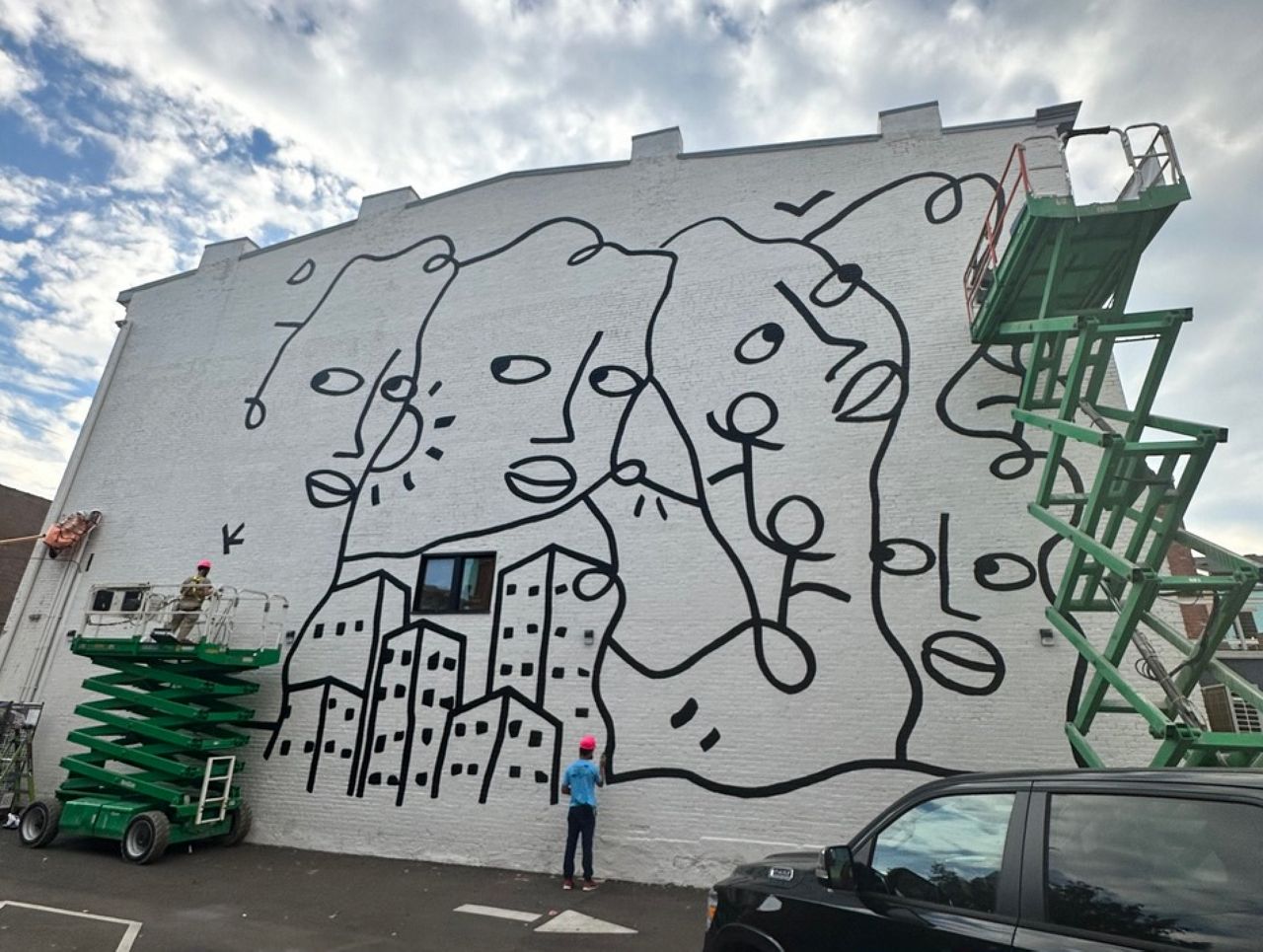 She also had a “great time” visiting several local museums and Findlay Market, which is only a stone’s throw away from her new mural.

She described “Danke” as an homage to Cincinnati’s German heritage, and an appreciation for its sense of creativity.

“I studied up a little on the city and its history, and wanted to tie it back to some of that in the simplest way possible, which in this case is with a ‘thank you’,” she added.

Martin feels public art is about accessibility and “bringing art to the people.” But it’s also about bringing visitors to Cincinnati.

“There are no barriers or hurdles to entry to public art,” she said. “And through BLINK — with its huge audience — there’s a lot of people who will now be exposed to art and artists from all over the world. That’s a huge potential impact” on the local art scene and Cincinnati.

BLINK organizers curated the roster of artists with a focus on promoting diversity.

While there are a lot of international artists this year compared to previous festivals, organizers strived to maintain a “strong local investment in local artistic talent” to add an extra level of investment in the work, Salzbrun said. 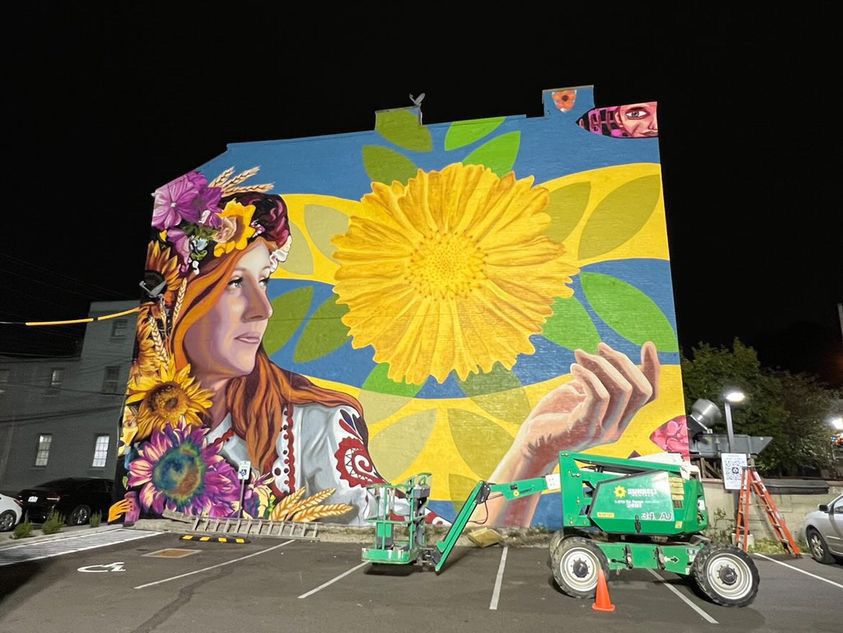 The team of muralist Jenny Ustick and motion designer Sean Hafer, both University of Cincinnati art professors, created the piece “Sister City” at 1926 Dunlap St. It depicts a Ukrainian woman wearing traditional clothing of the country, including a flower headdress.

The mural was a collaboration between the Cincinnati-Kharkiv Sister City partnership and cincy4ukraine. BLINK helped bring the project to life — and will attract the attention of thousands of eyes this weekend and many more in the months and years ahead.

“One of the most generous, exciting and admirable parts of BLINK is that it brings in these muralists of international profile, and to give space for some local artists as well, to create lasting works of art that essentially amount to a world-class collection of murals in our city,” said Ustick, who’s created more than two-dozen public art pieces around Cincinnati.

Much like BLINK, mural art is about being accessible to anyone who has sight and can pass by it, Ustick said. She feels the works broaden access to visual arts and activate buildings, streets and alleys that may otherwise go underutilized or underappreciated.

“Public art helps a person view those spaces through a new lens,” she said. “It becomes a way-finding element and way of identity to neighborhoods and its residents and visitors.”

Walter is overwhelmed by the amount of energy he’s seeing in OTR, a neighborhood he’s called home since 1984. He’s on the board of trustees for the Over-the-Rhine Community Council.

One project he’s especially excited about is the myriad art pieces at Hanna Playground — an area in the northernmost part of OTR and BLINK’s boundary. It’s a still developing part of the neighborhood.

Called “The BLINK OASIS,” the project called for the transformation of the park space through a mixture of projection mapping, murals, light-based installations and performance art. 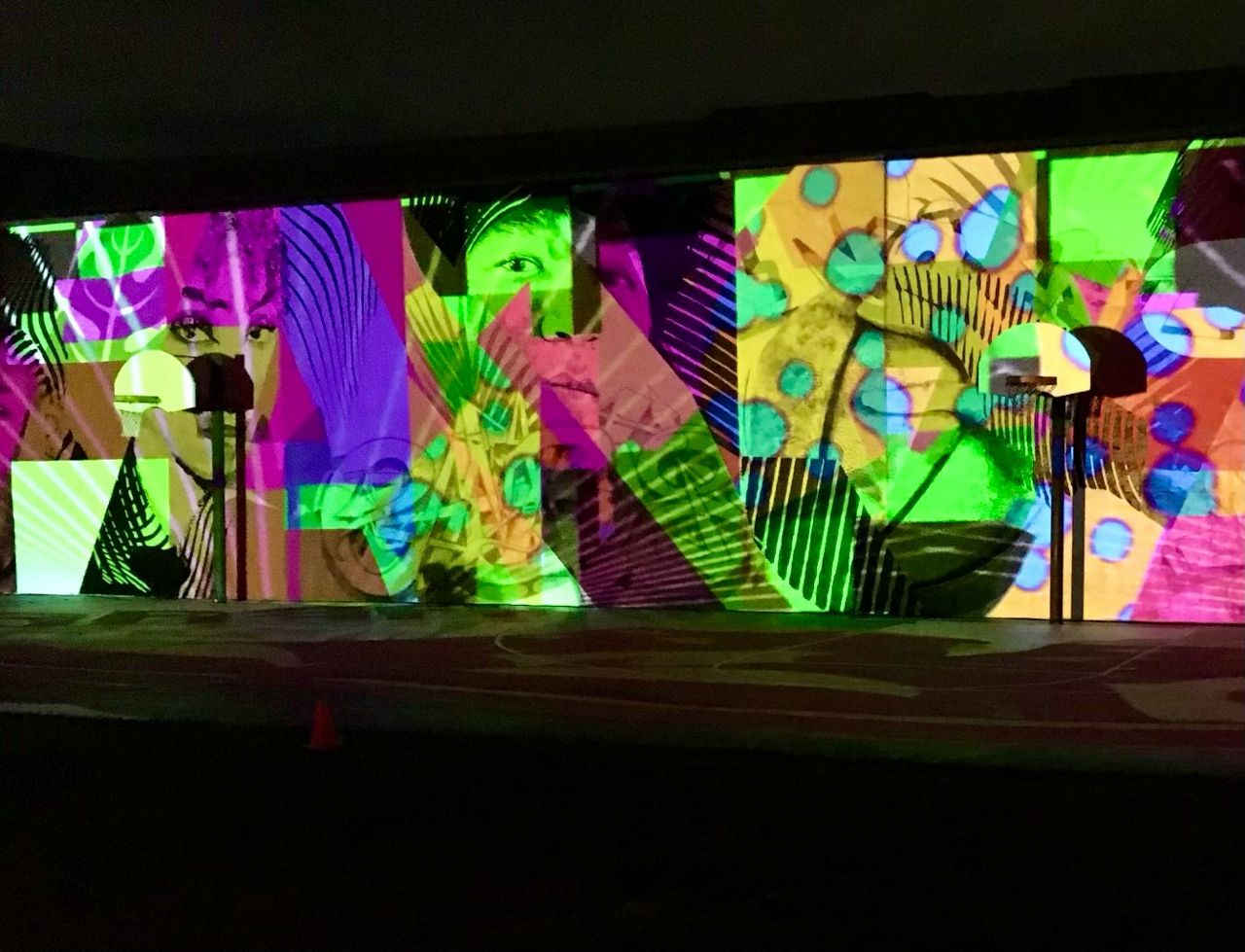 The basketball courts at Hanna Playground in Over-the-Rhine during BLINK. (Photo courtesy of John Walter)

It’s one of the “hidden gems” Salzbrun described – not just for BLINK but in the city as well.

There’s new investment coming into the area near the park, including the development of three historic but vacant buildings. That includes the buildings that once housed the now-defunct Jackson Brewery, Clyffside Brewery and Felsenbrau bottling plant. The development will soon be the new home of Cincinnati Beverage Company.

Beyond the art, there are musical performances planned by Detroit-based Sons of Silverton and Ernie Johnson. There’ll also be food and hospitality, and a slam dunk contest on Friday.

For BLINK, the creative team behind OASIS painted a large mural on the building right by the basketball courts and painted the court itself. They also plan to add some creative lighting each night.

Walter hopes the activation of Hanna Playground and the nearly three-dozen other attractions in the Findlay Market and OTR zones attracts a diverse group of guests and visitors.

“I think there are many people who turned on the news in the past and heard only about the negative things in Over-the-Rhine and kind of internalized that and said, ‘well, maybe it’s not a place I want to be.’ And that’s been the history of it.”

BLINK is going to leave a lasting impression on most of those 1.3 million minds, he said.