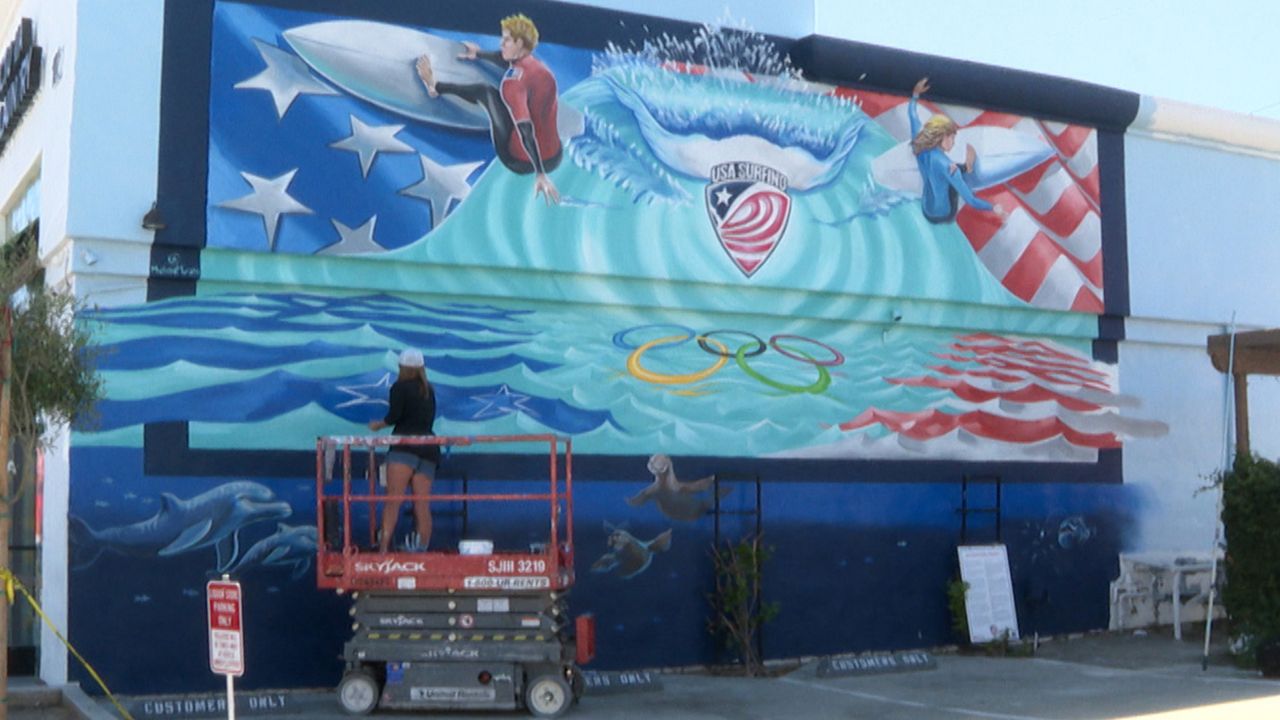 SAN CLEMENTE, Calif. — The Tokyo Olympics will have several new sports, including one where the competition goes down in the ocean. To celebrate the first time surfing has been included as part of the games, one city in Orange County has done something special.

San Clemente is the hometown of two members of Team USA for surfing, Caroline Marks and Kolohe Andino. It's also home to USA Surfing, the governing body for surfing in the United States. That's why the nonprofit organization decided to commemorate surfing being included in the Olympics with several murals around town.

As soon as the organization asked artists to apply for the projects, one local muralist in Orange County got right on it and started a design. Melissa Murphy created a video submission.

"Every mural, I want it to [be] better and better," Murphy said. "So I want this to be the best mural yet."

Her efforts paid off. USA Surfing picked Murphy and another artist, Dana Martino, to paint the murals. The city funded two of the murals at the cost of $2,500 each through the San Clemente Downtown Business Fund. The owner of Nomads Hotel, Sean Rowland, said he heard about the mural project and self-funded the third mural and selected Jeff Lukasik as the artist.

"To be selected is like a dream," Murphy said to Spectrum News 1 as she rode a scissor lift to prepare the wall she would soon use for the mural. Maneuvering the equipment takes the right moves and balance to get to where you want to go. It's sort of similar to the skills Murphy has been using for a different type of ride.

"I grew up surfing. So I surfed competitively in junior high and in high school," she said.

For almost the same amount of time, Murphy has also been painting murals.

"Forever. I started in high school, and I just kept going," she said.

The USA Surfing mural project combines both of her passions.

"This has a lot of meaning because I love surfing so much. Love the ocean. So just to be able to represent the United States in an Olympic event is really cool. So cool. And I'm really excited," she said.

She said she's also excited to see a sport she's loved all her life become an official Olympic sport.

"Girls in surfing, they rip so hard these days. And the guys too. It's just insane. So, it should be an Olympic event. It's so awesome. These athletes are incredible," Murphy said.

Getting the giant canvas — a white wall near Avenida Victoria — prepared and painted was an Olympic-sized job in itself. Murphy worked for weeks, 12-plus-hours per day, to get this project done. But she didn't complain about the long days because her mural is of a scene she can't get enough of — the ocean.

The artist's love for the ocean also comes from her decade as a lifeguard in Orange County.

Her passion for the ocean is the reason USA Surfing picked Murphy to paint one of three murals. The nonprofit's Kim Tilly said the murals are for the community to enjoy.

"[What] I'm hoping people get from the murals is inspiration. Inspiration for the sport of surfing, for the love of the ocean," Tilly said.

Tilly has watched the progress over three or so weeks beginning in mid-to-late June. She says it's been amazing to watch three blank walls located a block east of El Camino Real turn into works of art. The two other murals are near Avenida Serra and Avenida Del Mar. She said she hopes the murals will be a sort of landmark in the city, a place for people to take pictures, and a place to "bring that surfing stoke to everybody."

It's a feeling Murphy hopes to help bring to people even if they don't surf, just by looking at her mural. Or, at the very least, she hopes they find something to make them smile in the mural, which includes several smiling sea creatures.

"I love bright colors, and I love everything happy. And I just want people to be happy when they see it," she said, adding it's a tribute to the sport she can't wait to see in Tokyo.