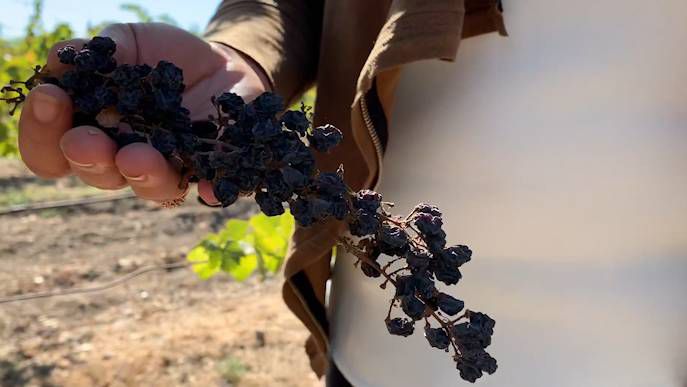 Instead of throwing out smoke-tainted grapes, Hoopes Vineyard is attempting to turn their grapes into brandy.

NAPA VALLEY, Calif. — While wildfires across Napa Valley have devastated much of this year’s grape harvest, one winery is trying to use the smoke to their advantage.


Instead of throwing out their smoke-tainted grapes, Hoopes Vineyard is attempting to turn their grapes into brandy. Lindsay Hoopes, the owner of the winery, said they are making the most out of a bad situation as wildfires continue to ravage the area and destroy their crops.

“Farmers, especially in the wine industry, are always beholden to Mother Nature. I mean this is a new challenge because we haven’t seen fires with this frequency, with this level of devastation,” Hoopes explained.

Hoopes grew up in the wine industry, and pouring a glass of Cabernet is second nature to her.

“I was a farmer’s daughter. Anyone who’s grown up on a farm can say they’ve had jobs from the beginning,” Hoopes added.

Now, walking through the vineyards is not the same as it once was as the smoke taints the taste of Hoopes’ organic grapes.

As each wildfire season has become worse and worse, Hoopes first noticed a difference in the quality of her wine in 2017.

“We made a wine that would have otherwise been a fully completed product but tasted like ashtray,” Hoopes said.

The winemaker knew the product was undrinkable, but she was determined to keep her family business alive.

“We figured, well, smoke is such a nice characteristic in spirits unlike in wine, why don’t we see if we can capture that essence,” Hoopes explained.

She adapted to make Mother Nature her co-worker. Hoopes said she began experimenting by taking her smoky wine and distilling it into brandy.

“The most exciting thing for me is that our results are so much better than we expected. It also helps me as a farmer to innovate and pivot. I can’t control these fires but not be concerned that we can’t do something with them,” Hoopes said.

Their first batch of brandy is still in the aging process and will not be ready until the end of 2021. Hoopes said it will be worth the wait.

“What we thought was a disaster of an unsalvageable product and really when you put it together and looked at it from a different lens we actually could recreate a spirit that mimics in a lot of ways some of the most coveted spirits in the world,” Hoopes said.

Even though the past few years have left Hoopes unsure if any of her crops will be usable amid wildfires and climate change, she’s grateful to have a plan B.

“If in one year we can’t produce the wine, well, then now we know how to make a fabulous product in a spirit,” Hoopes added.

Hoopes said she’s not only dedicated to saving her own smoke-tainted grapes but also hopes to help her neighbors rise from the ashes throughout wine country.