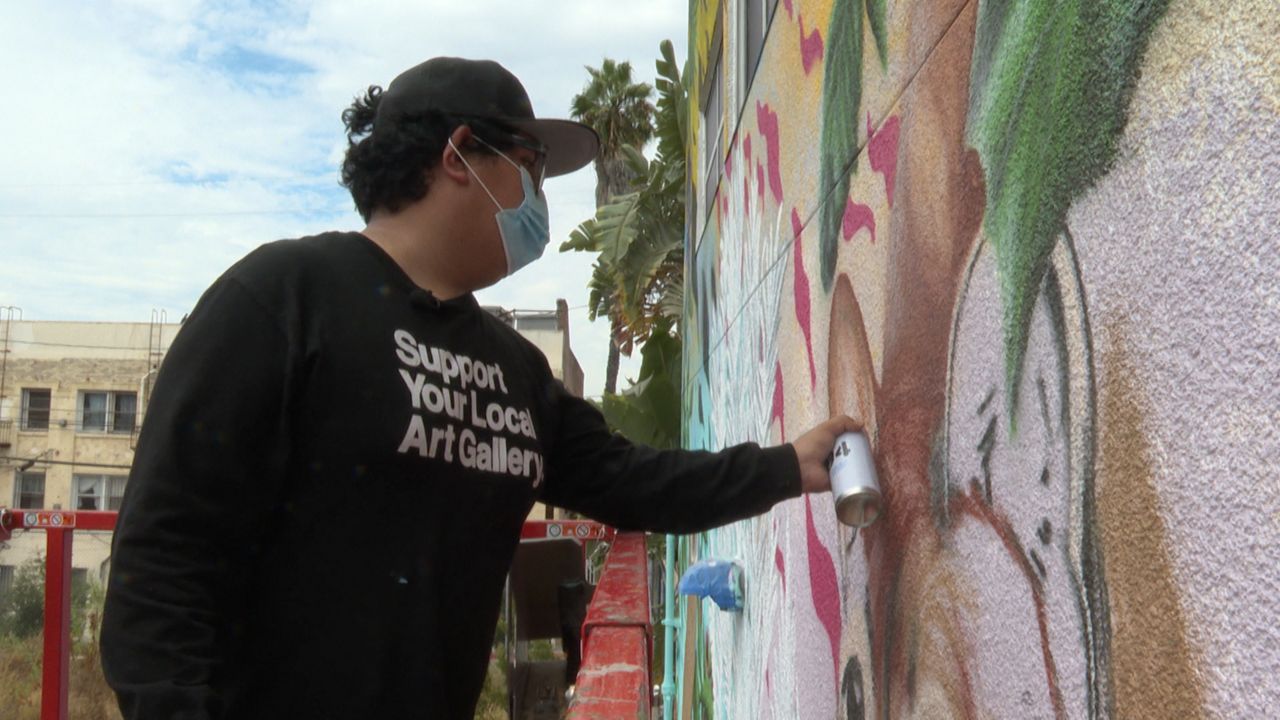 LOS ANGELES — When students are able to return to Esperanza Elementary School, they’ll find a celebrity on campus.

The most famous feline in Los Angeles, P-22, has made his way from Griffith Park to take a prominent position in the campus’s newest mural.

Artist Jonathan Martinez spent more than two weeks in the unrelenting August heat creating the masterpiece with a mission.

“You’re in the sun all day,” he said, covered head to toe in black clothing. “You’re painting 10, eight hours a day.”

Not that he’s complaining — Martinez, known on social media as Art of the Endangered, started painting animals as part of an assignment in college. During his research he learned about endangered species and says it sparked something in him.

Since then, he’s made wildlife, particularly vulnerable species, the focus of his work.

“We need to protect them because in the next 20, 30 years we might not have a lot of the species we see today,” he explained.

This latest mural marks the beginning of a partnership between Martinez and the National Wildlife Federation. He previously worked with the group earlier this year on a campaign memorializing P-56. This mural, the first of a new series, features another majestic male mountain lion, P-22, the #SaveLACougars mascot.

“It’s hard not to fall in love with him," Martinez admitted. “He’s such a beautiful animal, and powerful.”

Esperanza Principal Brad Rumble agrees and knows his students will be thrilled when they see the new addition painted above the playground.

The location is a perfect fit. Esperanza Elementary is home to a native California schoolyard habitat right in the middle of an asphalt jungle. It attracts red tailed hawks and burrowing owls.

Principal Rumble keeps a detailed log of the birds spotted in this small oasis, which he says gives students in this high-density environment a chance to connect with nature.

“We’re all living through really difficult times and we know how important connections are,” he explained, "connections to one another and to the natural world around us.”

Connection is also a big part of the #SaveLACougars campaign, which is working to build a wildlife crossing at Liberty Canyon. This is the first mural, and Martinez says the next one, planned for this fall, will be just as large or even larger.

“I want the mountain lion to cover half the wall,” he explained, “because I really want to highlight the campaign, what they are doing and also bring attention to P-22.”

For now, Martinez can’t wait for kids to return to campus and see the painting. He hopes it inspires them to want to learn more about the animals featured in it.

“When you learn about it and you see it, you fall in love with it,” Martinez said. "And you have that urge to protect it.”

That collection of species will soon look over the students in the hope that, one day, those students will look after them.