LOS ANGELES — When people think of electric vehicles, a plug typically springs to mind. Cars powered with batteries are the predominant EVs on the market, but there’s another option: fuel cells powered with gaseous hydrogen.

A quick primer for the uninitiated: hydrogen fuel cell EVs generate electricity while they are being driven, courtesy of an electrochemical reaction that combines hydrogen from the fuel tank with oxygen from the air in the fuel cell to drive the motor. Refueling is similar to a gas-powered car, only the gas in this case is hydrogen. It takes five minutes to refuel.

You’d be forgiven for not knowing such cars even exist. There are only three models on the market – the Honda Clarity, the Hyundai Nexo, and the Toyota Mirai, the latter of which has gotten a sleek update for the 2021 model year in an effort to normalize a technology that is still largely unknown. 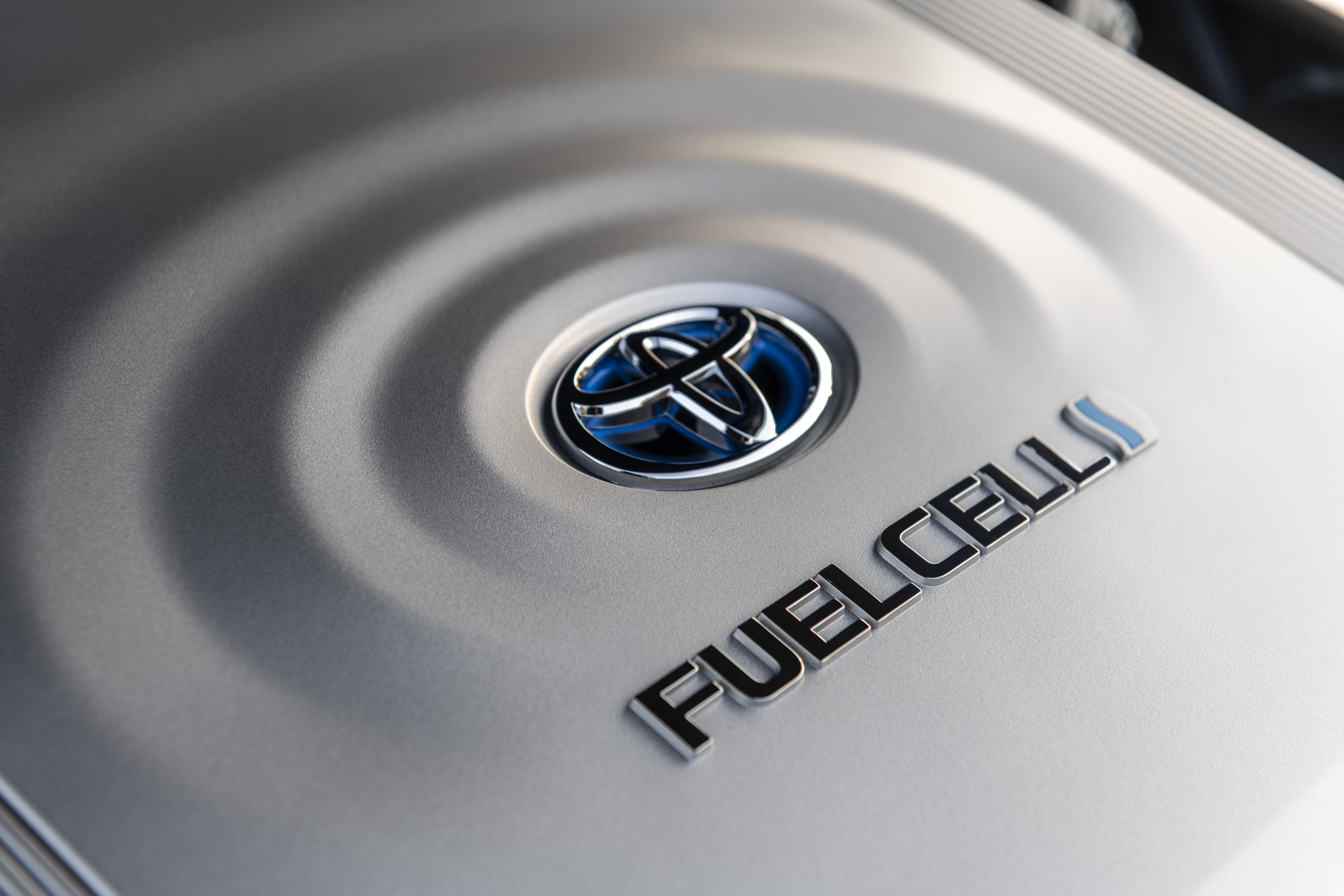 Available in two versions – the base model XLE starting at $49,500 and the higher-end Limited priced at $66,000 – the five-seat sedan does away with the sci-fi profile of the original in favor of a more traditional and upscale saloon. Longer, lower, and wider than the outgoing model, the updated Mirai comes with standard 19-inch wheels and the same rear-wheel-drive platform as the Lexus LS. It also ups the range to 402 miles per tank – a 30% increase over the first generation.

Toyota has sold just 6,500 Mirais in California in the five years the car has been on the market, but what Tesla has done for battery electric vehicles, the Mirai could do for hydrogen. It’s a luxury driving experience that is so refined you don’t even think about the fuel that’s propelling it. You’re just along for the ride, which is exactly what an “alternative fuel” car at this stage of the game should feel like. You only notice that it’s better than what you probably expected. 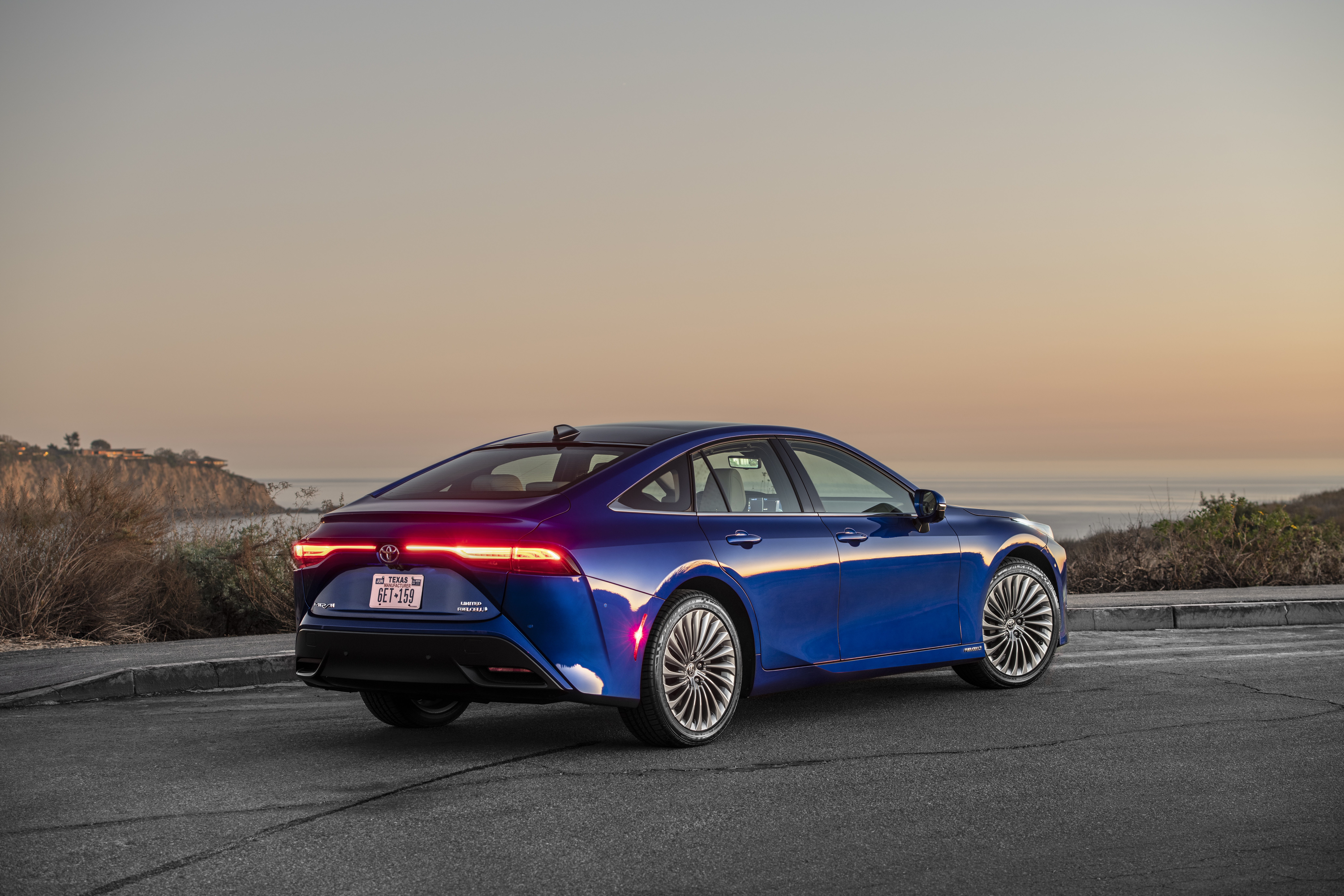 Driving the Mirai for an afternoon in Orange County, the experience was quiet and comfortable – almost like driving a cloud. Because it’s electric, there is no shifting. The acceleration is quick and smooth. Powered with hydrogen, there’s no engine grumble, no roaring exhaust, just a slight hum that, from outside the vehicle, sounds a little like Darth Vader heavy breathing. Inside, you could hear a pin drop.

There are plenty of technological creature comforts, many of them curving toward and oriented around the driver. A 12.3-inch high-resolution touch screen controls the climate, navigation, audio, phone, and apps, such as Amazon Alexa, who, if so desired, will speak to you through the Mirai’s 14-speaker JBL sound system. The center console includes a wireless charging pad for a cell phone. 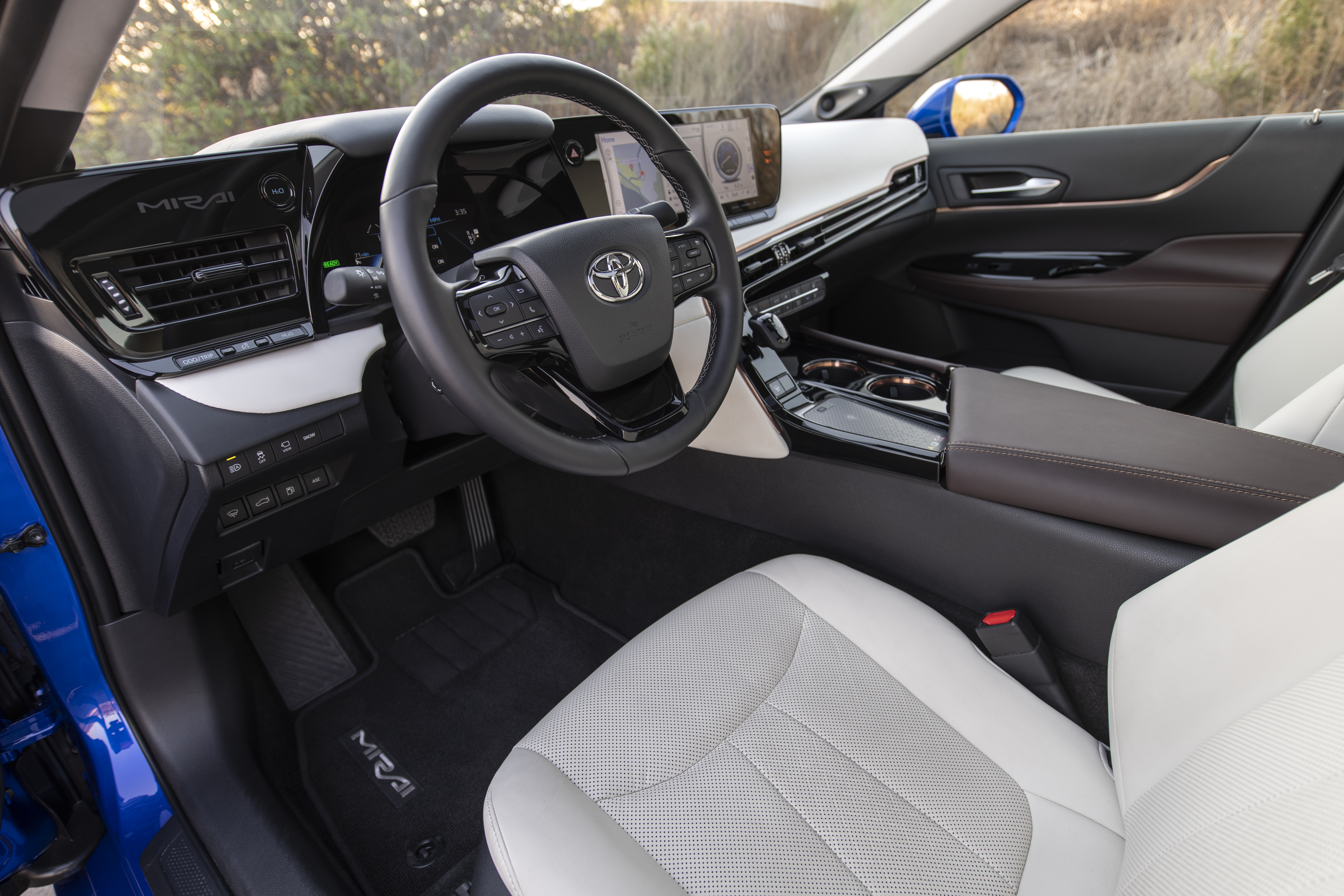 In Japanese, Mirai means future, but it’s taken a long time to realize it – more than 25 years to be exact. That’s when the Japanese automaker simultaneously began R&D on the HFCEV that would become the Mirai along with the car that’s now synonymous with eco driving – the Prius.

Twenty-three years after the Prius came on the market, Toyota now makes a variety of electrified vehicles, from hybrids and plug-in hybrids to pure battery electrics and the hydrogen fuel cell Mirai. By 2025, the company plans to offer electrified versions of all its vehicles. The automaker is also giving itself five years for EVs to become 25% of its U.S. sales and is hoping the new Mirai will help it get there. 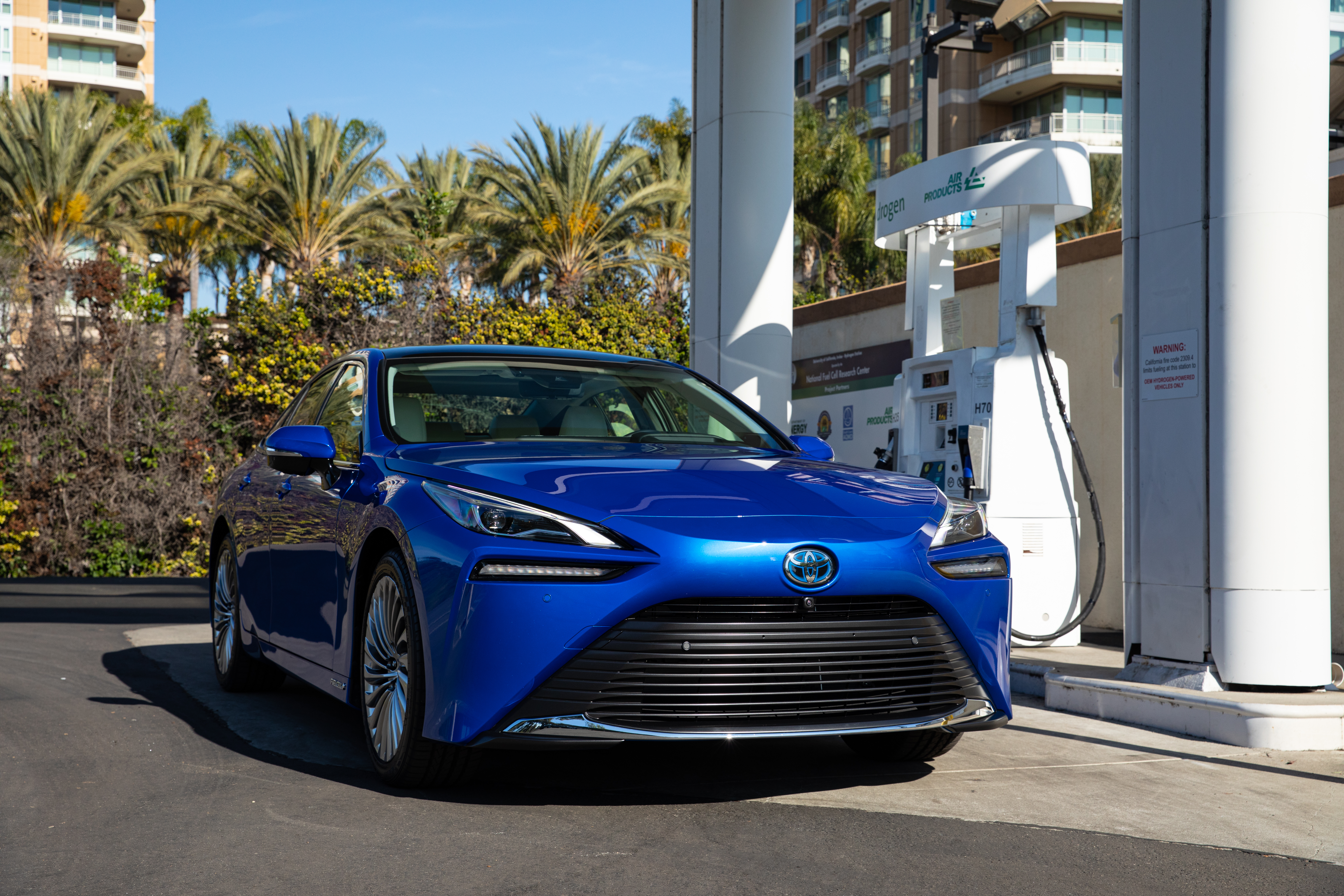 Due to the relative abundance of hydrogen stations in California, the 2021 Mirai will only be available in Los Angeles and San Francisco when it goes on sale this month. Still, Toyota is providing 21 days of complimentary rental cars for trips that may venture outside the areas where hydrogen fuel is readily available. The company is also providing three years of hydrogen fuel for free. 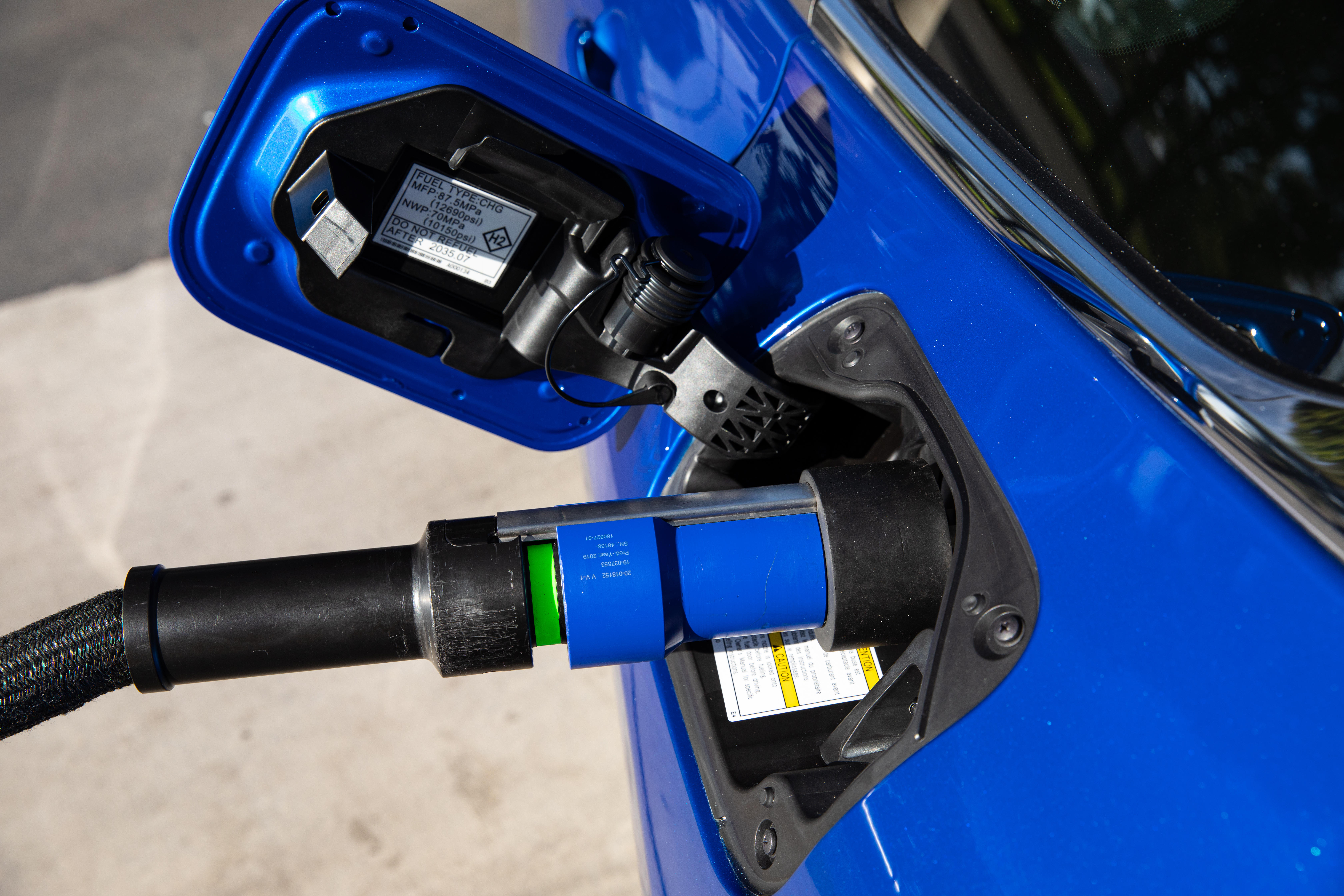 Why would someone choose a hydrogen fuel cell vehicle instead of a battery electric? In addition to the free fuel, hydrogen fuel cell EVs are eligible for a $4,500 rebate from the California Clean Vehicle Rebate Project and an $8,000 federal tax credit, bringing their upfront cost more in line with a comparable gas-powered model.

One in eight Americans lives in an apartment and may not have access to an EV charger. Instead, they can refuel at a public hydrogen station that takes five minutes to fill up – similar to a gas-powered vehicle.

Also, wildfires. With a year-round wildfire season in California prompting utilities to occasionally preemptively shut down, hydrogen is still accessible because it does not depend on the grid.

For any new technology to succeed, it has to be better than the technology it seeks to replace. With its 2021 Mirai, Toyota makes a compelling case for hydrogen fuel cell EVs that just might bring it out of obscurity.