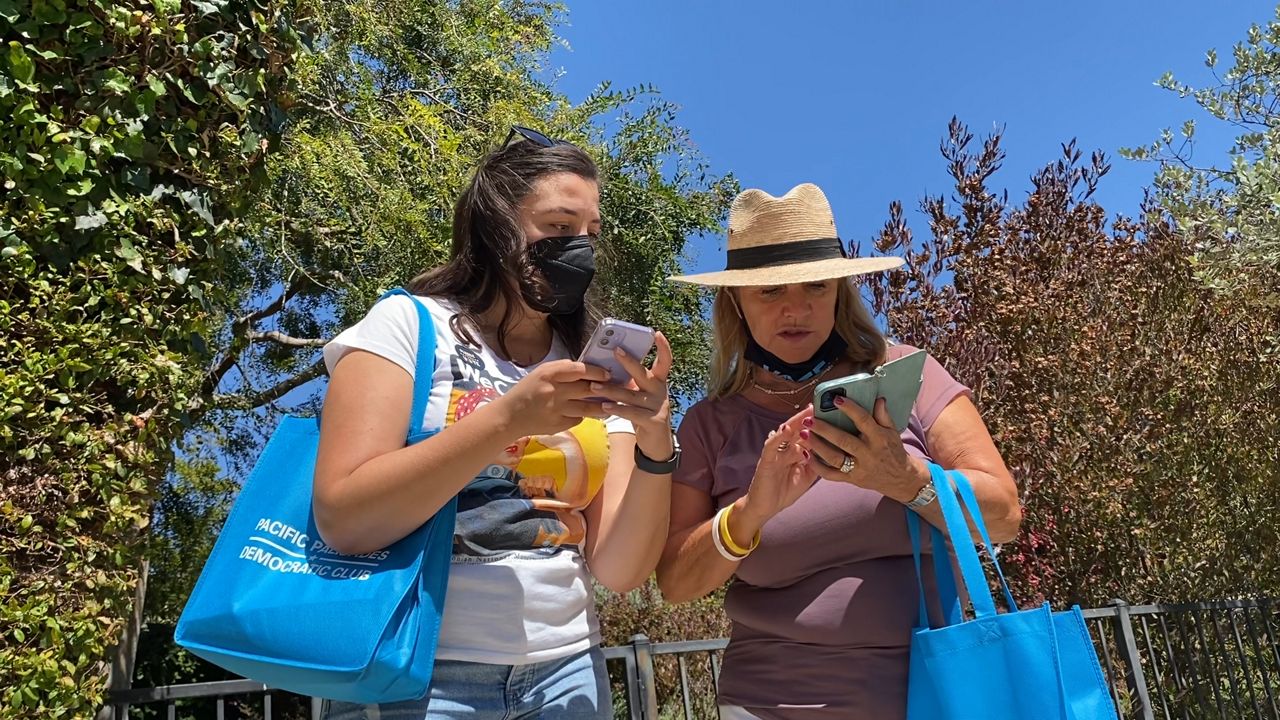 LOS ANGELES — On a recent Sunday afternoon, Sen. Amy Klobuchar was speaking to a group of 100 or so canvassers and politically inclined residents in a Pacific Palisades park.

The Democrat from Minnesota was at an event hosted by Grassroots Democrats HQ, an organization that campaigns for and supports Democratic politicians.


"Usually you can't fit things on bumper stickers or on signs, this time we can — vote no!" she said about the upcoming recall election.

She encouraged people to vote "no" and keep Gov. Gavin Newsom in office.

The senator is just one of the many Democratic heavyweights who has been visiting California in the past week. Vice President Kamala Harris made an appearance, as did Sen. Elizabeth Warren, and President Joe Biden is set to arrive Monday to support Newsom.

It is all part of a concerted effort by the Democratic Party and anti-recall groups to throw their combined weight behind the governor.

The energy around the recall election had been gaining some steam throughout the summer, but a poll by CBS/YouGov found that likely voters were split on whether to recall Newsom, which sent many in the Democratic party into overdrive.

It's a sentiment shared by Mana Shooshtari, the field and communications coordinator for Grassroots Democrats HQ.

After the speeches were complete, she canvassed the area and reflected on how much has changed politically over the past few months.

"There's a new sense of urgency to make sure Democrats know they do need to turn in their ballots," she said. "We have what happened in Texas this week with the shadow docket, where suddenly a woman's constitutional right to choose is gone."

Shooshtari, 21, is a full-time student but said the recall election has been her primary focus for the past several weeks and will be her sole focus right up to Election Day on Sept. 14.

"I told myself I'm contacting five people per day, to make sure they've turned in their ballot, the recall is going to be my life," Shooshtari said.

Not just Democrats are pulling out the stops in the final days leading up to the election.

The Republican front-runner, Larry Elder, also has been out canvassing and campaigning around Los Angeles and visited homeless encampments Wednesday in Venice, where an altercation took place.

On Friday, he visited The Bank of Mexican Food restaurant in Temecula as part of his "Recall Express" bus tour throughout the city.

However, none of the 46 candidates on the ballot have been able to drum up the same level of support, particularly regarding finances, as the anti-recall campaign. But, it does not mean it has been an easy ride for the Democratic Party and anti-recall groups.

"Ever since 2016, Democrats have been running against Donald Trump and Trumpism. Since then, Democrats wanted to chill out a little bit so it was incumbent upon the Newsom campaign to light a fire under the sleeping giant that is the Democratic base across California. We saw that early election fatigue early in the summer," he said.

"If you look at the ballots returned, Democrats vs. Republicans, Democrats are outpacing the GOP two to one on ballots that are returned," he said.

Jacobson added that by bringing out high-profile Democrats, the Newsom campaign is "exploiting every element of the Democratic Party," and that they are taking nothing for granted, particularly in the final days of the race.

After several hours of door-knocking in the Palisades, Shooshtari said she felt nervous but optimistic.

"We know everything can change in the matter of a week," she said.

Shooshtari said she would keep canvassing and focusing on getting out the vote.