Tuesday's election was for the right to fill out the remaining seven months of Katie Hill's term. Smith and Garcia will square off
again in November for a full two-year term representing the district in northern Los Angeles County and eastern Ventura County.

The race attracted national attention, with President Donald Trump tweeting his support for the Republican Garcia, an aerospace executive and former fighter pilot from a Hispanic background.

Tuesday was the deadline to submit ballots in the mostly mail-in special election to fill the Santa Clarita Valley congressional seat formerly held by Katie Hill, a race that has gained national attention in recent days thanks to online comments by President Donald Trump. It will take several days to count all of the mail-in ballots.

Santa Clarita Assemblywoman Christy Smith is trying to become the second consecutive Democrat to win what had been a seat long held by Republicans until Hill's 2018 victory over then-Rep. Steve Knight. Smith is facing Republican aerospace executive Mike Garcia. Smith finished first in the March 3 primary in the 25th Congressional District with 36.2 percent of the vote while Garcia was second with 25.4 percent. Knight finished third with 17.2 percent.

There will be nine voting centers open from 7 a.m. to 8 p.m. on Tuesday, seven in Los Angeles County, including at the Lancaster National Soccer Center. All participating Vote Centers will strictly follow the State and County's public health and safety guidelines related to COVID-19. Voters are encouraged to return their Vote by Mail ballot by mail no postage required or by dropping off their ballot at any participating Drop Box. 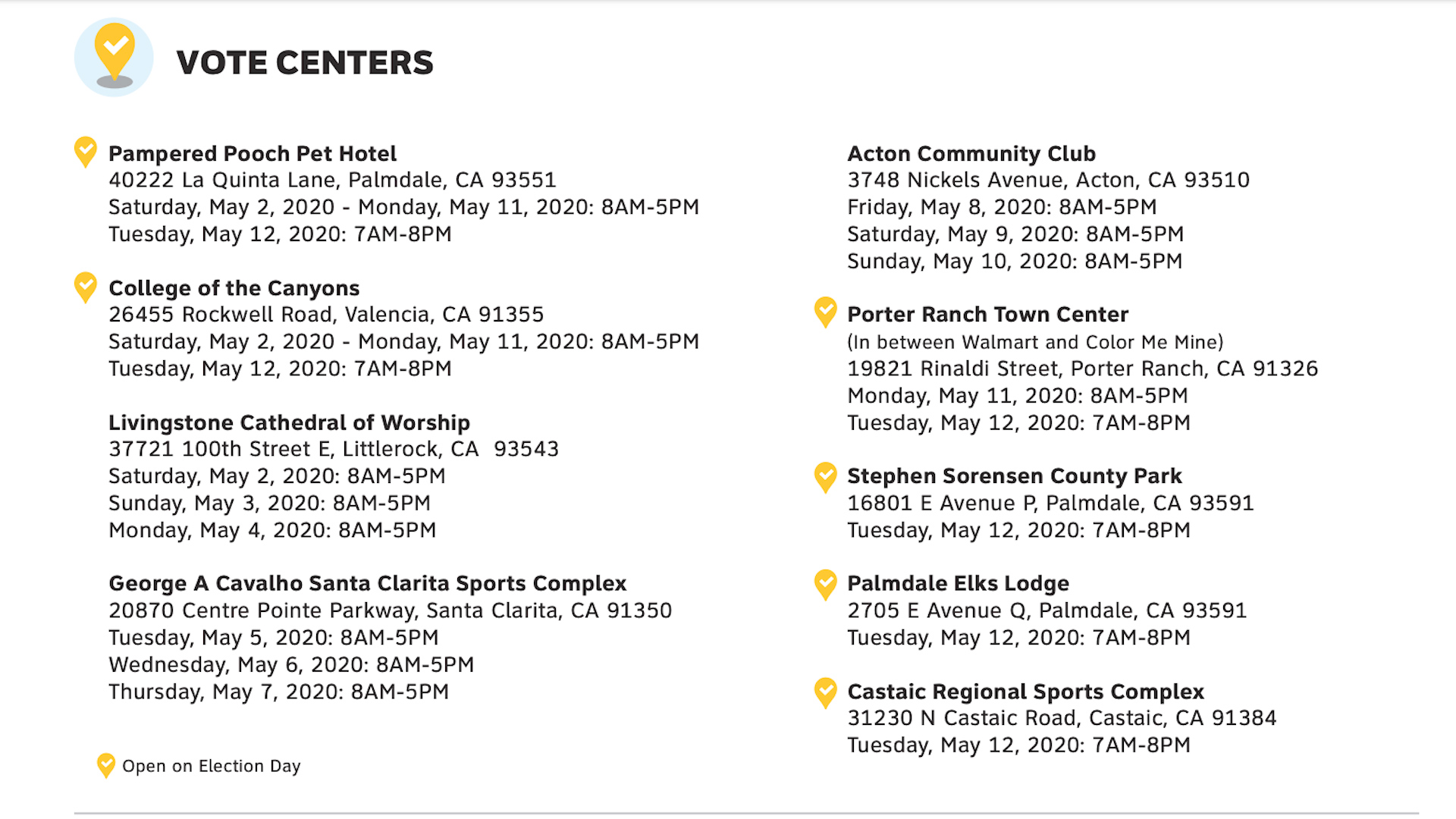 Katie Hill is a Democrat who flipped SoCal’s 25th Congressional District in 2018. Hill’s resignation puts this key swing state into play. District 25 has been held by Republicans since the 1990s. Katie Hill changed all of that. She was part of the so-called “blue wave” in 2018.

In California, the blue wave was especially strong. In 2018, Democrats flipped six seats, including four in Orange County, which has been a Republican stronghold, a place where Ronald Reagan said “good Republicans go to die.” House District 25 is another traditionally Republican seat.

“Governor @GavinNewsom of California won't let restaurants, beaches and stores open, but he installs a voting both system in a highly Democrat area (supposed to be mail in ballots only) because our great candidate, @MikeGarcia2020, is winning by a lot. CA25 Rigged Election!'' Trump tweeted Saturday.

The request to add a vote center came from Lancaster Mayor R. Rex Parris “late in the week and thanks to the city's assistance the RR/CC was able to quickly accommodate the additional vote center,'' according to Mike Sanchez, the public information officer for the Los Angeles County Registrar-Recorder/County Clerk.

Gov. Gavin Newsom signed an executive order March 20 requiring that all voters in the district receive a vote-by-mail ballot in an effort to protect public health and safety during the coronavirus outbreak. Newsom had no connection to the addition of the voting center in Lancaster. The election was never a mail-in only election.

Long lines could be seen and social distancing was being enforced at this voting center at College of the Canyons today. Voting is currently underway in the #CA25 special election to fill the seat vacated by former Democratic Rep. Katie Hill.

Smith, who will turn 51 on Friday, was elected to the Assembly in 2018 after serving two terms on the governing board of the Newhall School District. She began her career in public service as analyst with the U.S. Department of Education.

“I am running this race making voters a very simple and straightforward promise, that if they elect me to serve them in Congress, I will work day in and day out to find solutions to the pressing problems we now all face like access to affordable health care, and real economic relief for families and local businesses, and I will never get caught up in the politics that so often paralyze our system,'' Smith told City News Service.

We need your help. I am the Democratic nominee in a special Congressional election on May 12. Please retweet this ad we just went on TV with today. America is hurting - but our community is strong - and we’ll get through this - together. pic.twitter.com/h8WIyJTME9

Smith has lived in Santa Clarita for 39 years, graduating from Hart High School, then attending College of the Canyons and receiving a bachelor's degree from UCLA.

Garcia is a graduate of Saugus High School and the U.S. Naval Academy. He was a Navy fighter pilot during the Iraq War and became an executive with the aerospace firm Raytheon Co.

“I am running for office because taxes in California are out of control,'' Garcia told City News Service. “Southern Californians simply cannot afford more taxes and we cannot take liberal Sacramento policies to Washington.''

Garcia said his experience in the aerospace industry “along with my military credentials makes me uniquely qualified to tackle the national security issues this nation is facing.''

I am running to serve again; to protect what I fought for as a Navy fighter pilot. With CA's problems of high taxes and homelessness threatening to spread across the nation, we need a fighter in Congress, not a career politician.

I am ready to answer the CALL once again. pic.twitter.com/MawIqfri0j

Both candidates have presidential support. Trump tweeted his endorsement of Garcia April 20 and again on electin day, tweeting that the Republican “will be a tremendous fighter for the U.S. and the State of California.''

Remember, get out and Vote for Mike Garcia in CA25. A really big deal for our Country!

Former President Barack Obama recorded a robocall on Smith's behalf. Former U.S. Ambassador to the United Nations Nikki Haley announced her endorsement of Garcia Monday, saying in a statement released by the campaign, “as a combat veteran, Mike and his family understand the true meaning of sacrifice and service. A Navy fighter pilot, who has seen our national security threats firsthand, he will do what it takes to keep our country safe. And, as a small businessman, he understands the value of a
dollar. Mike Garcia is exactly what our country needs.''

“I am a candidate who loves to have person to person conversations,'' Smith said. “When I ran for Assembly I would knock on doors to introduce myself to voters, answer questions, and ask for their support. That is obviously no longer an option and we have had to transition to conversations over the phone and via video chat."

Hill announced her resignation Oct. 27 and it became effective Nov. 3, following the release of photos online and allegations of an extramarital affair with a staff member.

The winner of Tuesday's election will serve out the balance of Hill's term. Garcia and Smith will square off again in the November election for the chance to serve a full two-year term.