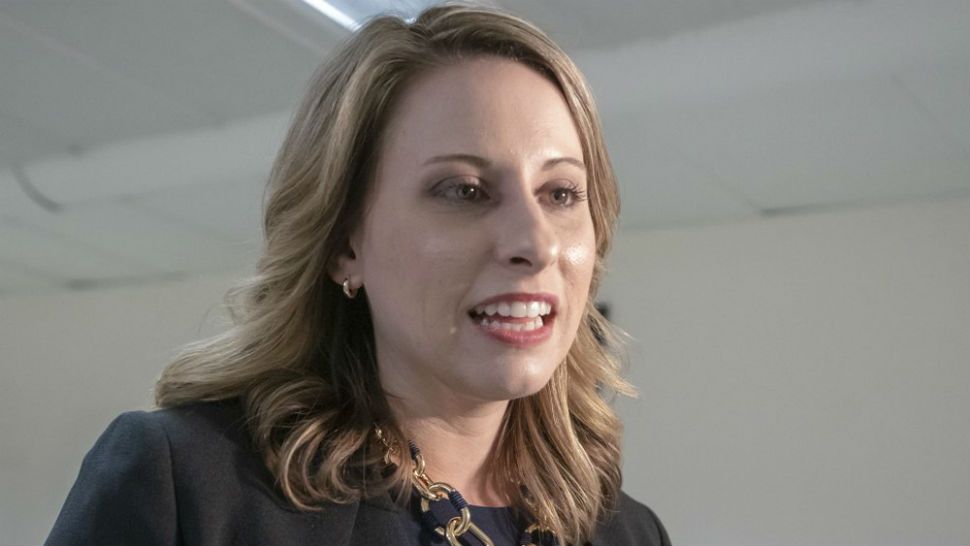 WASHINGTON –  The once rising California Democratic star freshman, Katie Hill, is stepping down from her congressional seat. The resignation is a shock no one would have seen coming just two weeks ago which comes amid the exposure of racy photos, alleged improper relationships, and an ethics probe.

Hill’s staff was reportedly young and excited to support the millennial Congresswoman who was energetic and determined to make changes to Capitol Hill. This year was supposed to be an exciting new chapter for Representative Hill, the new rock star freshman from California.

No one knew then in November of 2018 that her promising tenure would be cut short.

“I announced the most difficult decision of my life; that I would be resigning from Congress,” said Hill, in a video she released Monday.

In the video and in a statement, Hill claims her husband is “abusive” and “hateful” and took actions against Hill that forced her to resign.

“I made this decision so that my supporters, my family, my staff, and our community will no longer be subjected to the pain inflicted by my abusive husband,” said Hill.

@RepKatieHill releases a video, nearly in tears, to her community about the events that unfolded this week and her decision to resign --> https://t.co/H7xXJvtOGZ @SpecNews1SoCal

In a span of just a few days, racy photos of Hill surfaced, including one of Hill nude and brushing a clothed woman’s hair, and an ethics investigation launched into whether Hill had inappropriate relations with a congressional staffer which is forbidden in House rules.

Hill denied those allegations. Hill did admit, though, to a relationship with a campaign staffer, which is not prohibited.

@RepKatieHill denied relations with congressional staff, but admits a throuple with a campaign staff woman. A throuple is agreed on by both wife and husband. Hill says resigning is right so no one else has to get hurt; says her husband is “abusive” and released private photos

We understand, however, that the relationship Hill had with the campaign staff was consensual and agreed upon by the woman involved, Hill, and her husband.

“I have to take my personal fight outside the halls of Congress. Too many Americans are counting on Washington to fulfill our promises,” said Hill.

We sat down with Hill just about two weeks before everything unfolded. She was passionate about the impeachment inquiry and said no one ever knows what the future may bring.

At that time, Hill said: “There is no political calculus that needs to be done… if we are thinking about [the inquiry] from what kind of effects will this have on my reelection then I don’t think we’re doing the job that we were sent here to do. I also don’t think we can predict what people are going to react or what the dynamic is going to look like or what the landscape is going to look like in a week, let alone a year.”

“I’m hurt. I’m angry. The path that I saw so clearly for myself it’s no longer there,” said Hill, nearly in tears. “I never claimed to be perfect, but I never thought my imperfections would be weaponized and used to try to destroy me and the community I’ve loved for my entire life. For that, I am so incredibly sorry. I’m so grateful for the outpouring of support that I received.”

Many news outlets have reached out to her husband for comment, with no response so far. Many have spoken out to support Hill saying this situation is a double standard; even Republicans have voiced support for the Congresswoman.

For now, it’s unclear when Hill will officially leave the office.

It could happen as soon as November 1, the end of the congressional pay period. Hill’s exit shakes up a competitive special election which Governor Newsom has just about 14 days to set a date. Some speculate the date will be on the early election date of March 3.

Some Democrats have come forward for the seat: Christy Smith and David Rudnick who plan to try to keep the seat blue after years of Republican control. Republicans have stepped up: Sgt. Mark Cripe, Mike Garcia, Angela Underwood Jacobs, and Steve Knight, who said he is considering the race. Knight was unseated by Hill last year, for 25th district again.

For constituents, the office will still be open for information and phone calls, and Hill’s staff will still be allowed to work there until there is a new elective.