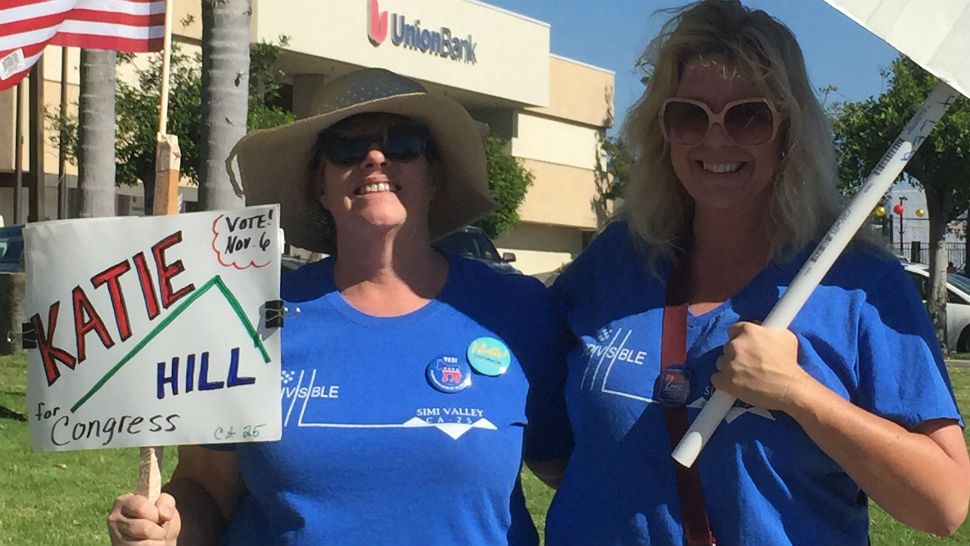 SIMI VALLEY, Calif. – “So it looks like we're going to have to split up the neighborhood again, to do the canvassing. I can take the even numbers and you can take the odd ones if you want,” said Leanna Brand.

Brand is talking to her friend, Heather Stephenson, about their plans to start knocking on doors again after Katie Hill resigned from her seat as the Congresswoman for California’s 25th District. They both love their Simi Valley neighborhood, but they say the political divide in this community is real, sometimes dangerous.

Pointing to a hole in her garage door Brand says, “In 2008, I had a Barack Obama sign in front of my house, and somebody decided to shoot up my garage with a 45. It's gotten a lot better, but we're not done yet.”

In 2018, they thought Katie Hill could help bring about some positive change in communities like Simi Valley, Santa Clarita, and Palmdale. They were two of Hill’s most committed volunteers for almost a year during her run for Congress.

“We went to work hard. We wrote over 17,000 postcards to every democratic voter in Simi Valley with our fellow volunteers, and we hit the streets. Every weekend we had people out canvassing knocking on doors passing out flyers,” said Brand.

They were determined to get Katie Hill elected and she was.

“Heather and I could actually be found sometimes over freeway overpasses with big cardboard signs! We did not take no for an answer - and we got our district turned to blue,” said Brand.

When they heard Hill had resigned on Sunday amidst allegations of having an inappropriate relationship with the staff member, they were both shocked and angry.

Stephenson shakes her head and says, “It was an error, a lapse in judgment. And here we are, she's had to resign. We have an entire Congress full of men who have done much worse who are still in office on are given the past. It's so truly, truly unfair.”

Social media posts for the 25th District indicate that not everyone is sorry to see Hill gone.

“We are not all broken hearted. She's getting exactly what she deserves,” Brand reads on the 25th Congressional District’s Facebook page.

However, Brand says many people were very happy with how involved and responsive Hill was to her constituents. The district as a whole now has more Democrats and Independents than Republicans. So the battle for this seat to stay Blue and not go back to being Red is going to be a tight one.

The volunteers are on postcard duty again, encouraging their neighbors to get ready to vote in a possible special election for Hills Congressional seat. They are hoping for a candidate that will follow on the path Hill was on and that starts with getting out the vote.

One Democratic candidate who has already said she’s going to run for Katie Hill's seat is Assemblywoman Christy Smith.

“We know that when Democrats vote, democrats win. So it is really important to make sure everyone votes it's the bare minimum we have to do to keep our democracy going,” said Stephenson.