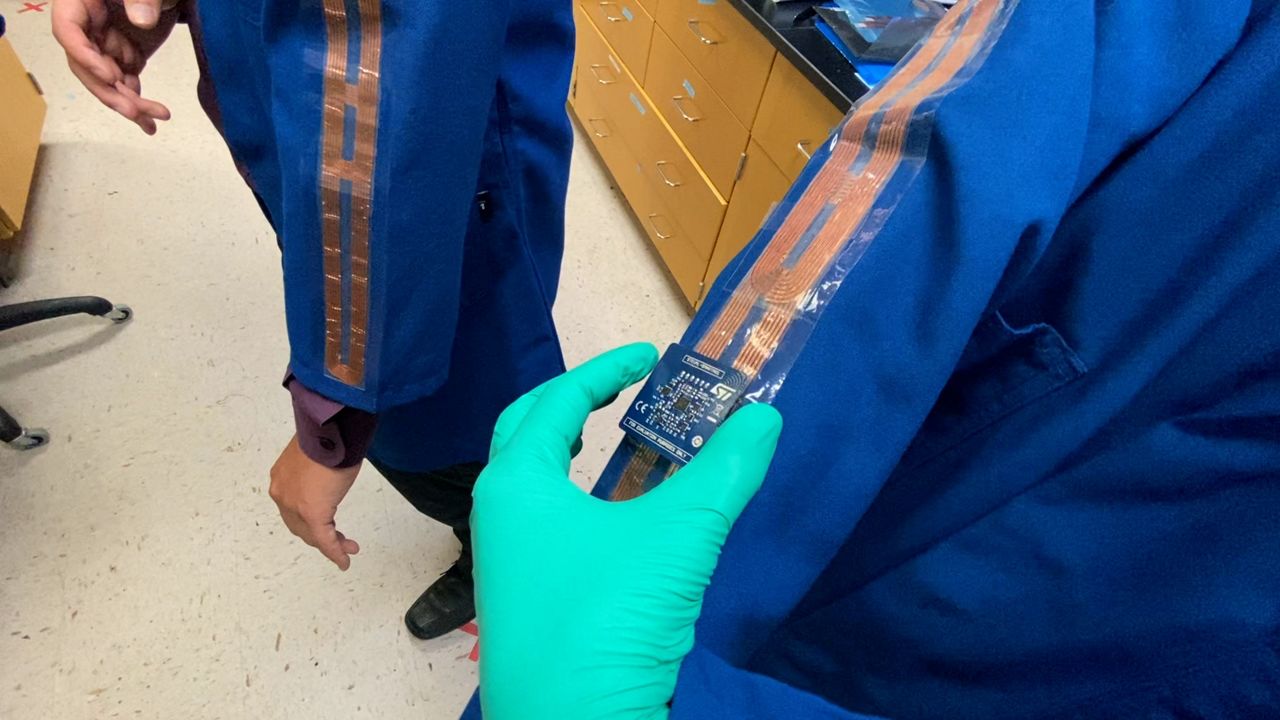 IRVINE, Calif. — Some scientists in Irvine have created a flexible fabric that could help unlock doors without the use of a key or badge and make a payment with a wave of a hand or even a high-five.

"It's technology at the tip of our hand to use it on demand," said Amir Hajiaghajani, a doctoral candidate at the University of California, Irvine, who helped create the technology.

He explains that the system includes coiled metals and sensors that are built into the fabric and use near field communication or NFC. Hajiaghajani said anytime you've used something like Apple Pay and held your cell phone up to the reader at a store, you've used NFC technology.

He said one could even pay for a cup of cappuccino without having to pull out a credit card or digital wallet using the system the team created.

"We can do this communication with simple gestures like a high-five or a handshake," he said.

He said the person's cell phone would have to be nearby but does not need to be taken out to complete a transaction.

While it is a bit more complicated, he said simply stated the sensor in the fabric would communicate with a device nearby, say a phone in a pocket, and send it to the payment portal. He said the system can be touchless too by waving an arm near a device, "and do the transaction safely as it was previously using a credit card."

UCI electrical engineering and computer science Professor Peter Tseng said that this system is able to send signals via magnetic induction and nothing is hard-wired. The system doesn't require batteries, either, since it's powered through whatever device it communicates with, such as a nearby cell phone.

Tseng said they have proven their flexible fabric-enabled NFC system can send data several feet versus inches in the current NFC system.

"Probably crisscross within a room potentially; that's probably the max," he said.

He said it could be programmed to analyze an athlete's performance with a sensor in their existing uniforms.

"Creating this functionality that bridges between what we can use every day, as well something we can use to express ourselves," he said.

The researchers said it has the potential to measure and transmit a patient's vital signs with their invention in a hospital gown and could potentially allow for fewer things attached to a patient.

Ermin Dzihic, a third-year medical student at UCI, is currently in his surgical rotation. He said the technology could be a game-changer in the medical field.

"Patients are connected to so many cables and monitors. Being able to reduce the size of these monitors by having maybe a small sticker connected to the skin with Dr. Tseng's technology within the gown being able to transmit it to the nurse's station could vastly improve patient care and comfort," Dzihic said.

Shi Jun, a fourth-year medical student, said he plans to go into oncology. He said this technology could offer doctors more than just a snapshot of information at an appointment about their patient.

"Chronic diseases, including cancer, managing those kinds of diseases can benefit from having a long-term sensor that is always on feeding important information," Jun said.

"A lot of time when patients have [a] disease, they're experiencing it not in front of their doctor's eyes," he said.

Tseng and the team's technology will offer a broader picture if ongoing, convenient data collection is available.

Hajiaghajani said if the ecosystem to use their technology is built out, it could be widely available because, "It's pretty affordable, it's cheap. And it's pretty reliable."

The researchers said they imagine one day having their technology sold at stores.

The bonus is that since the systems are flexible and easily attached to many fabrics, they said the technology wouldn't make one sacrifice one's fashion sense.