SANTA MONICA, Calif. – Like a lot of Angelenos, Alex Song watched his TV with a mix of sadness and horror on Sunday night as looters broke into the Shoe Palace on Santa Monica Blvd., stealing Nikes and Adidas through its shattered display window.

As general manager of the shop next door, Song hoped BookMonster would be spared the same fate. It wasn’t. A half-hour after watching the looting on TV, he received a call from his landlord asking him to check the shop’s remote video feed on his phone.

“Then I saw the people come in,” Song said Monday morning as he stood next to the pile of broken glass left by thieves who stole all of the store’s computers, except for the one they broke and knocked over shelves of CDs and DVDs. “It’s very sad to watch the people loot my items.”

BookMonster was one of many Santa Monica businesses that were tagged, torched, and looted in the beachside city Sunday following a peaceful midday protest organized to decry the killing of George Floyd while he was in the custody of Minneapolis police. By late afternoon, that protest was superseded by rioters, many of them looting stores and spray painting the fronts of businesses, saying, “Life ends tonight,” “RIP George Floyd,” “No peace,” and “Prosecute the choker!” 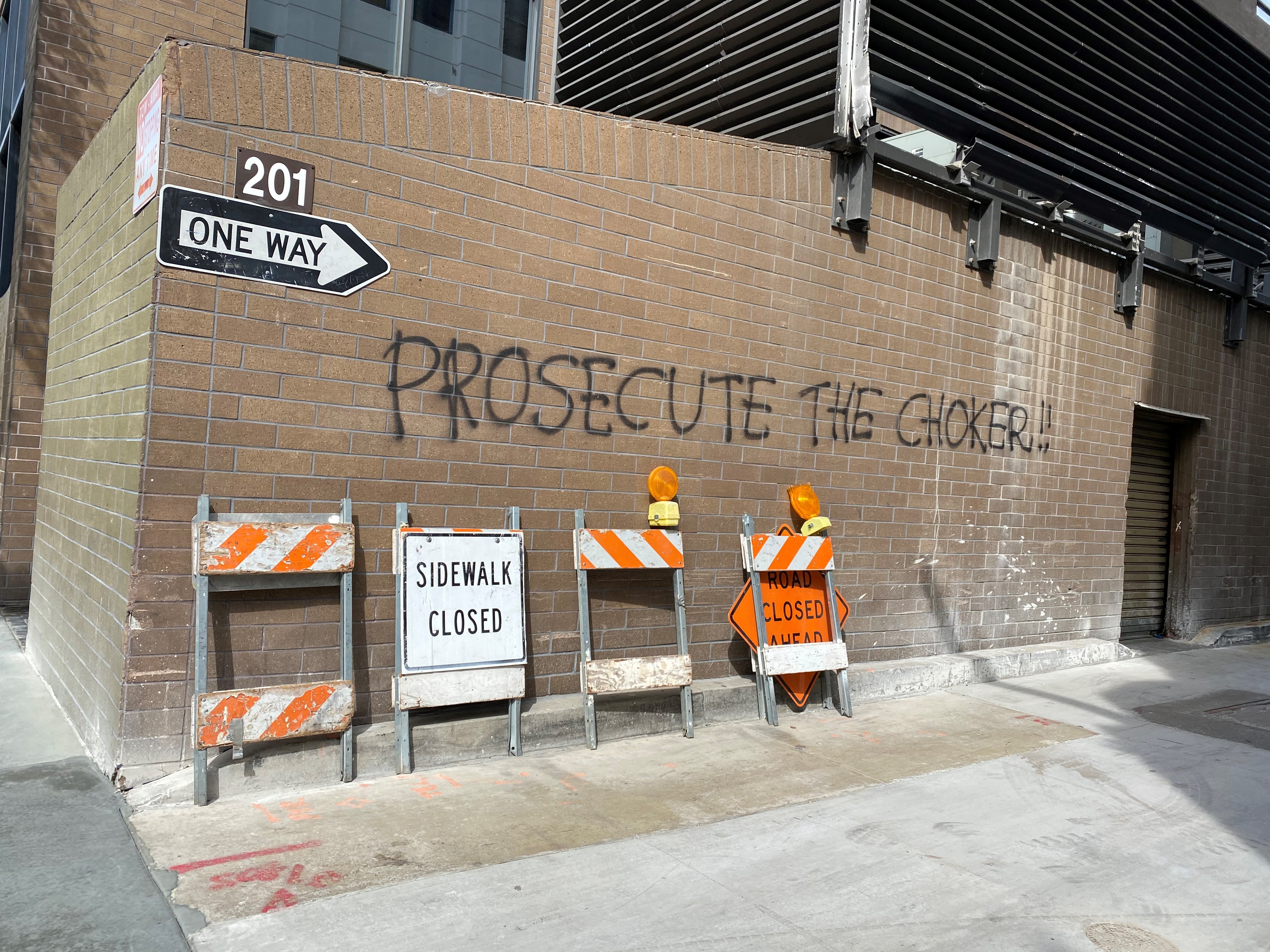 Monday morning, store alarms were still sounding throughout the business district, where shops from Patagonia to REI to Vans were being boarded up as thousands of volunteers milled the streets with brooms, buckets, and gloves hoping to help.

“When I get very angry and sad and feel like I can’t do anything, I need to move,” said Elissa Rosen, a Santa Monica resident who, on Monday morning, was helping to box up the CDs and DVDs that had been toppled at BookMonster the night before. “I need to get my hands dirty and help people out because I want to do something to fight against this.”

Rosen was attending Sunday’s peaceful protest on Montana Ave. when friends told her people were starting to loot just a few blocks away.

“These looters and rioters just make the peaceful protesters look bad,” said Rosen, who showed up to clean up the aftermath.

BookMonster was the first shop that accepted her offer. Many businesses were turning away wannabe helpers because they first needed to document the damage with their insurance companies and get approval to sweep up the broken glass and wipe away the graffiti. 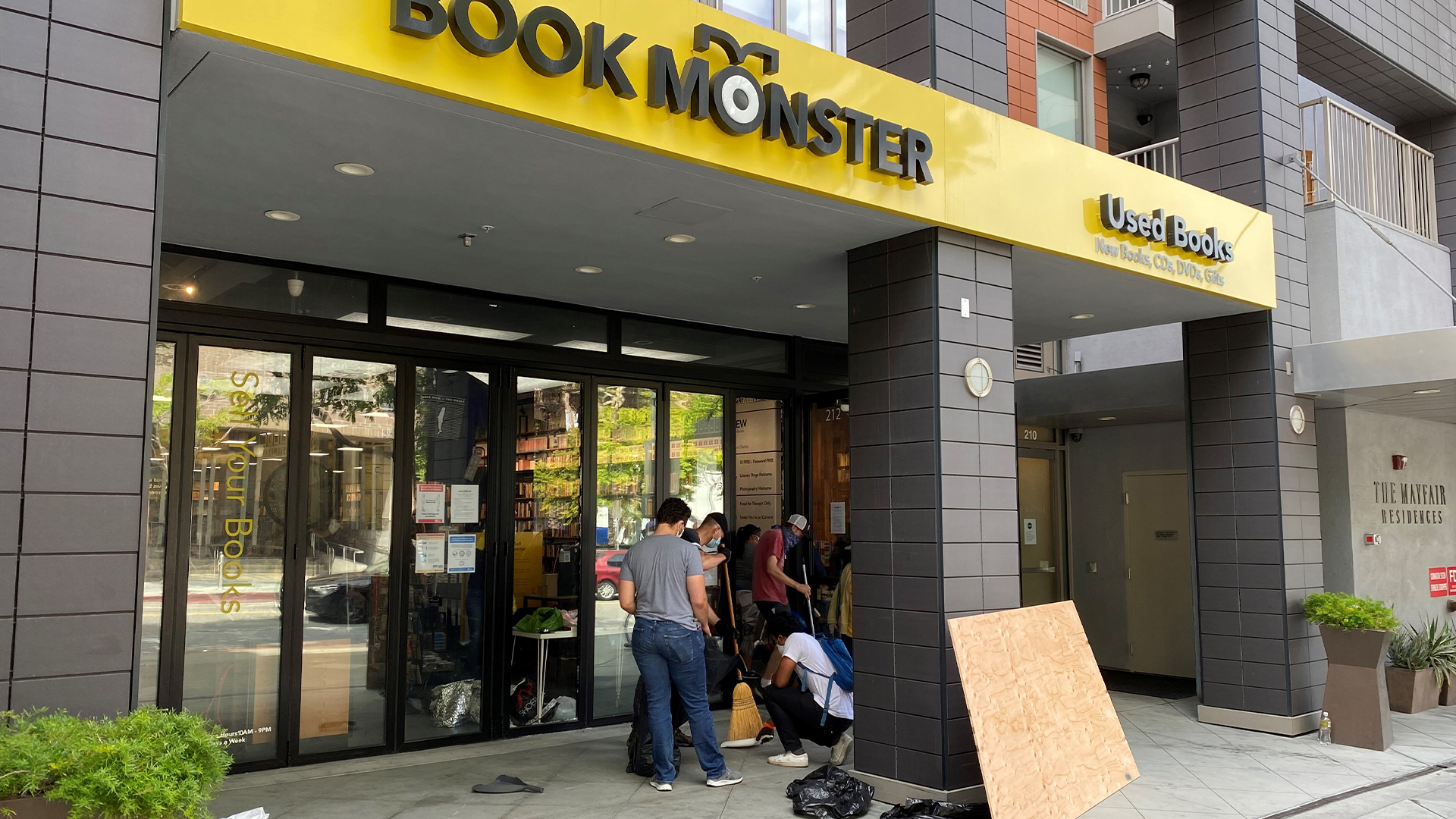 “We just care about our city and don’t want to see it trashed, especially our historic buildings,” said Pamela Mass. A former Santa Monica resident, she came to the city Monday morning to help scrub graffiti off the historic tile outside the Shoe Palace next door to BookMonster.

During ordinary times, Santa Monica is abuzz with skaters, surfers and bicyclists. But between the pandemic and the George Floyd protests, these times are far from normal. On Monday morning, the sidewalks that were practically vacant from lockdown only days earlier were filled with volunteers from all corners of the city, who came wearing masks and toting their own cleaning supplies to work side by side with strangers.

“This is better than I clean my own bathroom,” Chris Valenziano quipped while scrubbing away graffiti on the wall adjacent to BookMonster. 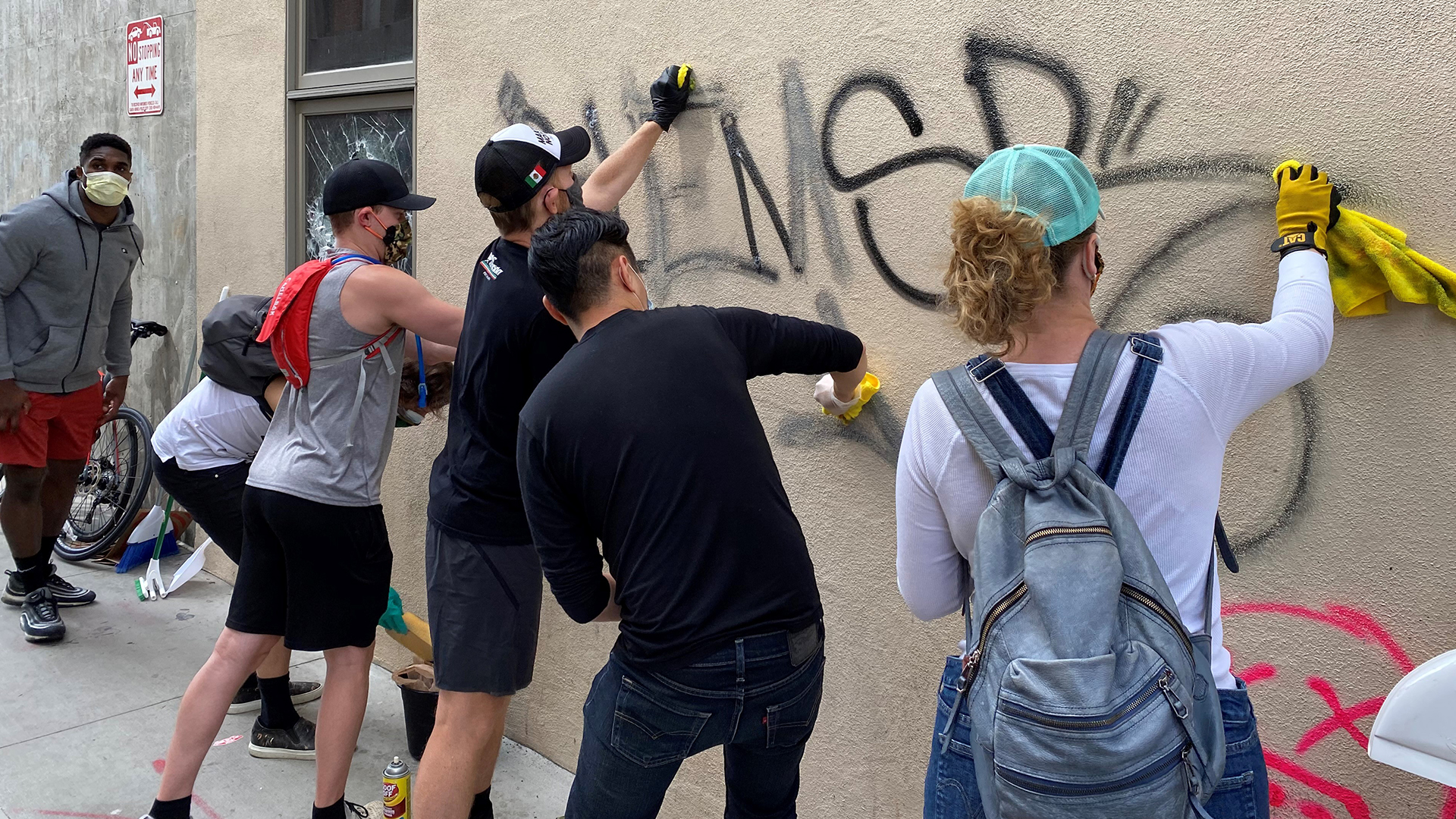 Volunteers came from all over the city Monday morning to clean up graffiti and other looting damage in Santa Monica.

The citizen volunteers were rushing to clean up before Santa Monica imposed yet another curfew, starting at 1:30 p.m. for its business district Monday, and 4 p.m. for the rest of the city. Santa Monica is hoping to avoid a repeat of Sunday, when approximately 438 people were arrested on suspicion of various crimes, including looting and burglary, according to the Santa Monica Police Department.

“I understand people protesting for freedom, but some people destroy the business, especially mom and pop stores,” said BookMonster general manager, Alex Song. He said the store sustained about $20,000 worth of damage during Sunday night’s looting. “It’s very sad. And it’s very painful. It’s a tragedy for us.” 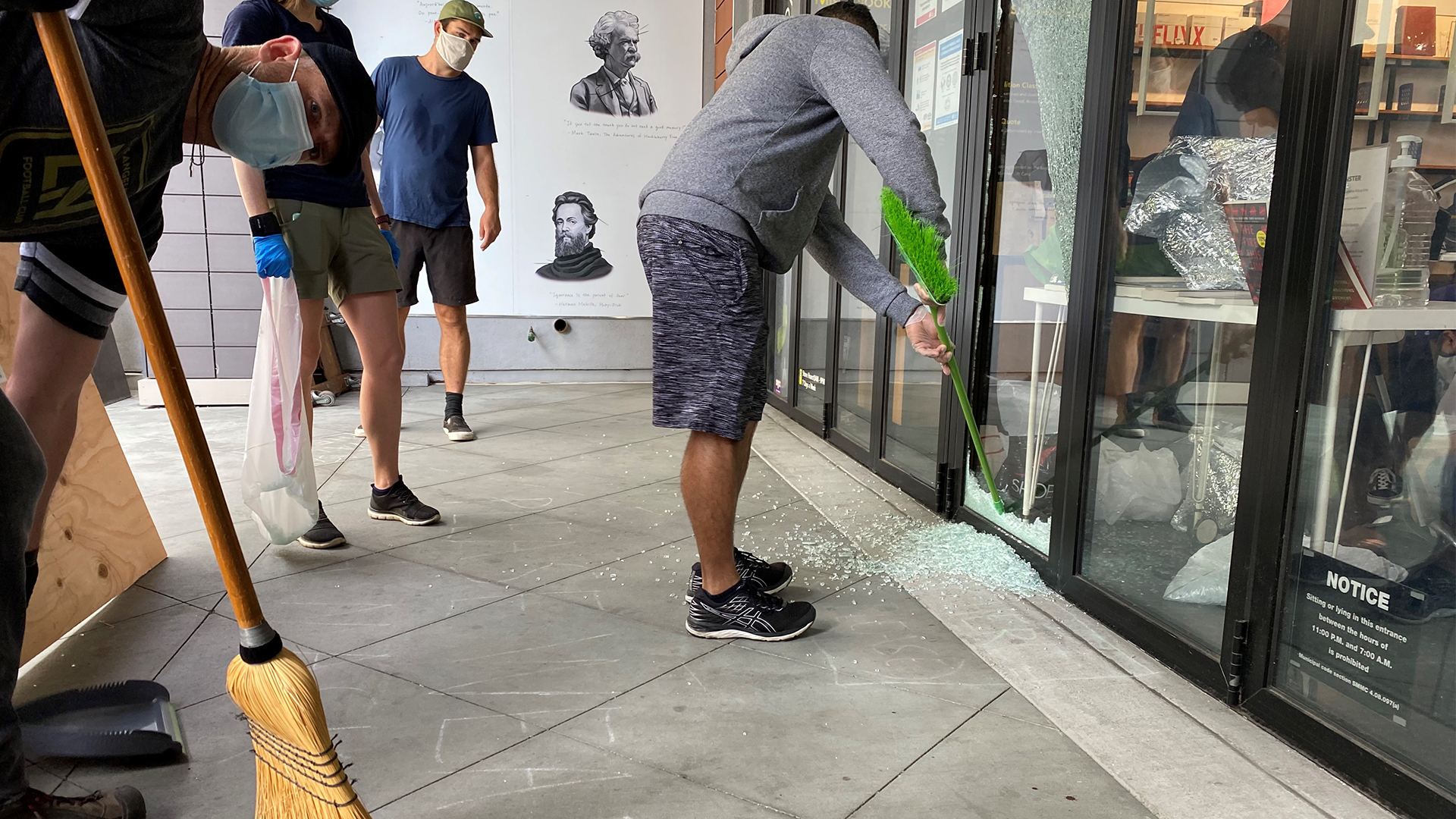 Volunteers assist in cleaning up BookMonster, a Santa Monica bookstore that was damaged by looters.