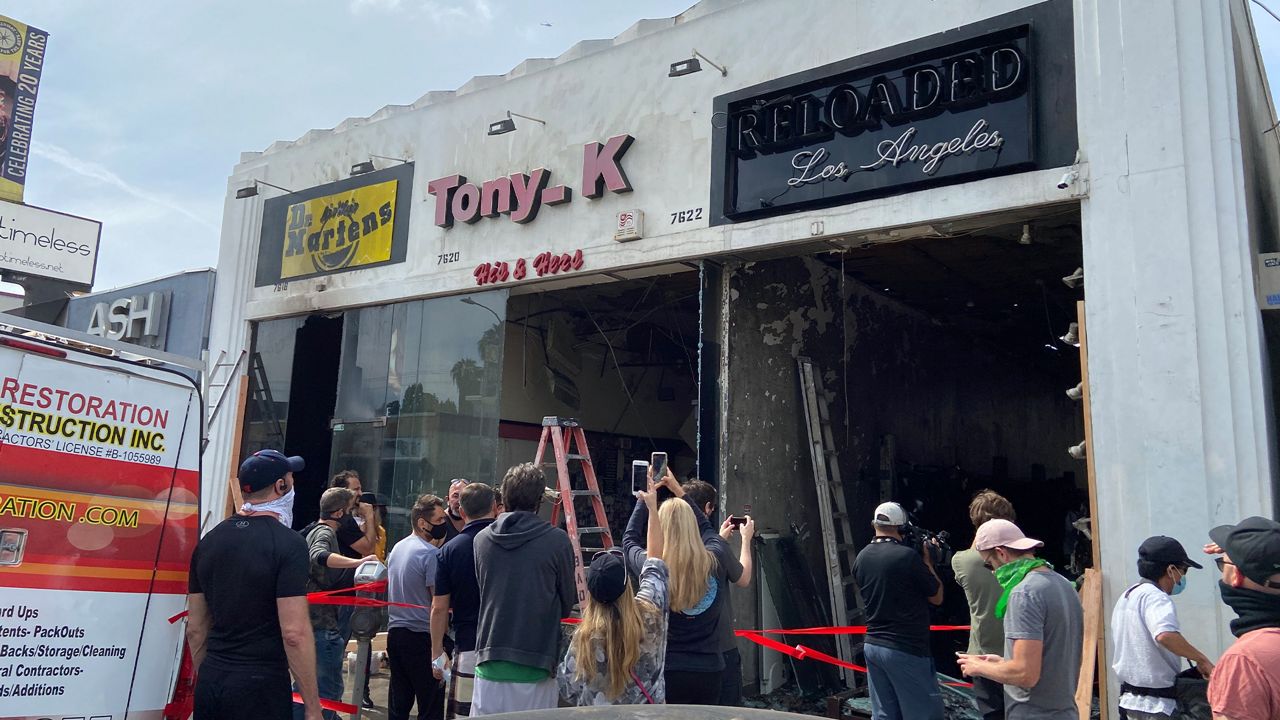 LOS ANGELES – Tony K, a high-end shoe store on Melrose, was one of the businesses burned on Saturday night when protests over the death of George Floyd at the hands of Minneapolis police turned ugly. Surveying the damage, owner Tony Kokozin said most of  his merchandise was now worthless.

Kokozin left Lebanon 40 years ago, fleeing the country's civil war for a brighter future in America.

His business imports and sells shoes made in Italy. He has operated on Melrose for 31 years.

It was one business on this block that burned Saturday night, with some flames still visible Sunday morning.

Kokozin says he lost $450,000 worth of merchandise, that in addition to the unknown costs of damage.

"I know that I'm very sad about what happened. I know that somebody has to pay for the damage I have. I have no other income," he said.

He first saw his shop in flames watching television on Saturday night. Now, in the light of day, he is upset with the city in which he built his business.

"We are paying tax to cover our self, these kind of problems, but they didn't help us. I blame the city nobody else," he said.

As business owners like Kokozin take in the damage, neighbors came out to lend a hand and be of service to their community.

Community members came out in numbers today to clean up graffiti and other damage in the Fairfax District, the epicenter of Saturday's protests over the death of George Floyd at the hands of police. Protests are ongoing—a Los Angeles County curfew of 6 pm has been declared. pic.twitter.com/FxSNNvXkz8

"They're losing their businesses that they worked so hard for, so what we are doing, we started on Fairfax, cleaning. We walked up to you know, helping businesses cleaning, sweeping floors, getting glass up," said one neighbor who gave her name as Akana.

Akana attended the protest Saturday before things turned violent. The damage will have a lasting impact in her community and she feels these actions took away from the protester's message.

"All of these small businesses, they support everyone, and then people to come in here, and just start looting to make the protesters honestly look bad, is not fair," she said.

For Kokozin, this painful reality is already on top of the months-long forced closure because of the COVID-19 pandemic.

He had just reopened the shop last Wednesday after restrictions were eased for retail.

So it adds to his frustration with the city...after he complied with what they asked of him.

"It was a government order, everyone has to close that's why we listen to our government and what they say, we obey," Kokozin said.

But after managing to just hang on for a few months, it's not the pandemic killing his three-decades-old business, but rather winding up in the cross-hairs of a city and country divided.