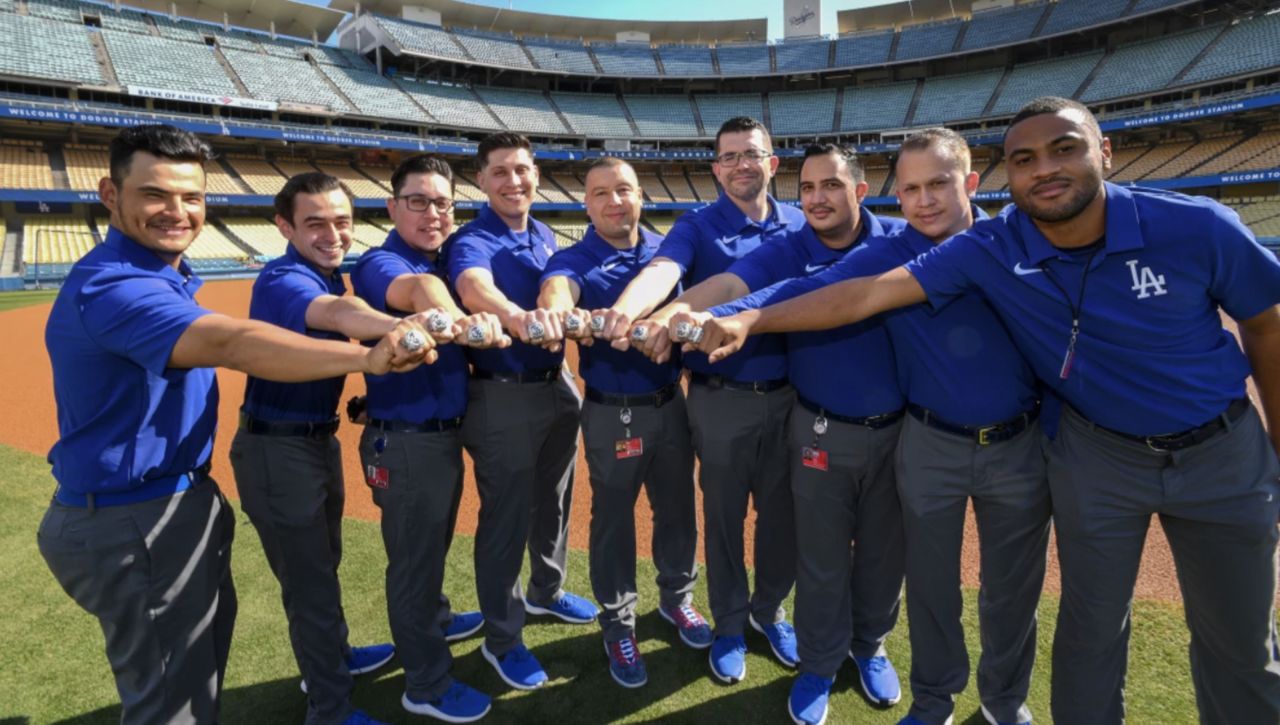 Inside the world of Dodgers' bat boys

The Dodgers just got through battling their longtime rival the San Francisco Giants in the National League Division series. If you've been watching the games at home or high up at Dodger Stadium, you might see bat boys fetching bats or running out on the field to hand players cards. LA Times Assistant Sports Editor Steve Henson joined Spectrum News 1 anchor Kelvin Washington with the story.

The first time Henson saw bat boys during a Dodgers game he thought they were teenagers.

"They looked at me from the press box like adolescents, and I wondered when they'd have time to do their homework, you know? So, I arranged an interview, and I was surprised to be met by 25-year-old Branden Vandal, a college graduate with a goatee and a mustache. So, it turns out the three Dodgers' bat boys are bat men, and their ages are 36, 33 and 25. From the cheap seats, Branden Vandal, Javier Herrera and Eddie Gonshorowski look like teenagers. But that is not the case," Henson said.

The bat boys are assigned various tasks all over the field.

"Well, everybody knows bat boys retrieve the bats. So, another task is relatively new in this age of advanced analytics and defensive shifts," Henson said. "And so, when manager Dave Roberts calls timeout to make a pitching change, the bat boy gathers these cards filled with information that the fielders need to position themselves. So, he runs to the mound where the infielders have gathered and hands each one of them a card. And the players look at where they should be positioned, and then they tuck those cards into the middle of their cap. You see this happen anytime at a Dodger game. And then the bat boy sprints to deep center field; it's like a hundred-yard dash, and he hands cards to the outfield, and then he sprints off the field. So, when there are lots of pitching changes, it's like a full-blown cardio workout that he's got."

"You've probably noticed that every time a baseball touches the ground, it's replaced these days," Henson said. "So, the bat boy is responsible for replenishing the supply for the umpire, and the Dodgers use about 150 new baseballs every year. And then the bat boys engage with the fans sitting at the field level. They wave and make small talk, and then they do their jobs with joy and a little bit of swag. But what fans don't see is what these guys do before and after games in the clubhouse, they clean cleats, clean batting helmets, wash uniforms and stitch rips in uniforms. They do everything to make life easier for the players when they show up for the game. So, it's distinctly unglamorous work."

Even though being a bat boy is a lot of hard work, Henson says it does come with perks.

"Until 2020, throughout baseball, the home team would provide bat boys and clubhouse attendants for both teams," Henson said. "So, there wasn't a need for them to travel on road trips. But when play resumed in 2020, bat boys and clubbies traveled, so teams maintained a COVID bubble to reduce the risk. And then that carried over to this year. And so, the bat boys love it; they are staying at five-star hotels and eating at nice restaurants just like the players."

Many of these bat boys have been on the job for years and even decades.

"In the cases of Mitch Poole, Jerry Turner, Alex Torres, they enjoy the work. They feel privileged to be part of the Dodgers' organization," Henson said. "They may not contribute as much as Chris Taylor ... but they do contribute, and the team recognizes that," Henson said. "The bat boys and clubhouse attendants, they all received World Series Championship rings last year."

"Two of the three bat boys worked each game, and they rotate, except that when the Dodgers win the same two bat boys work the next game just for good luck," Henson added.

"They spend their days in close quarters in the dugout, in the clubhouse, but they still hang out off the field," Henson said. "They go to each other's weddings and graduations. And even though this is a job they love, some of them have aspirations. They only need to look down the freeway in Anaheim for inspiration from Angels general manager Perry Minasian, who started as a bat boy.