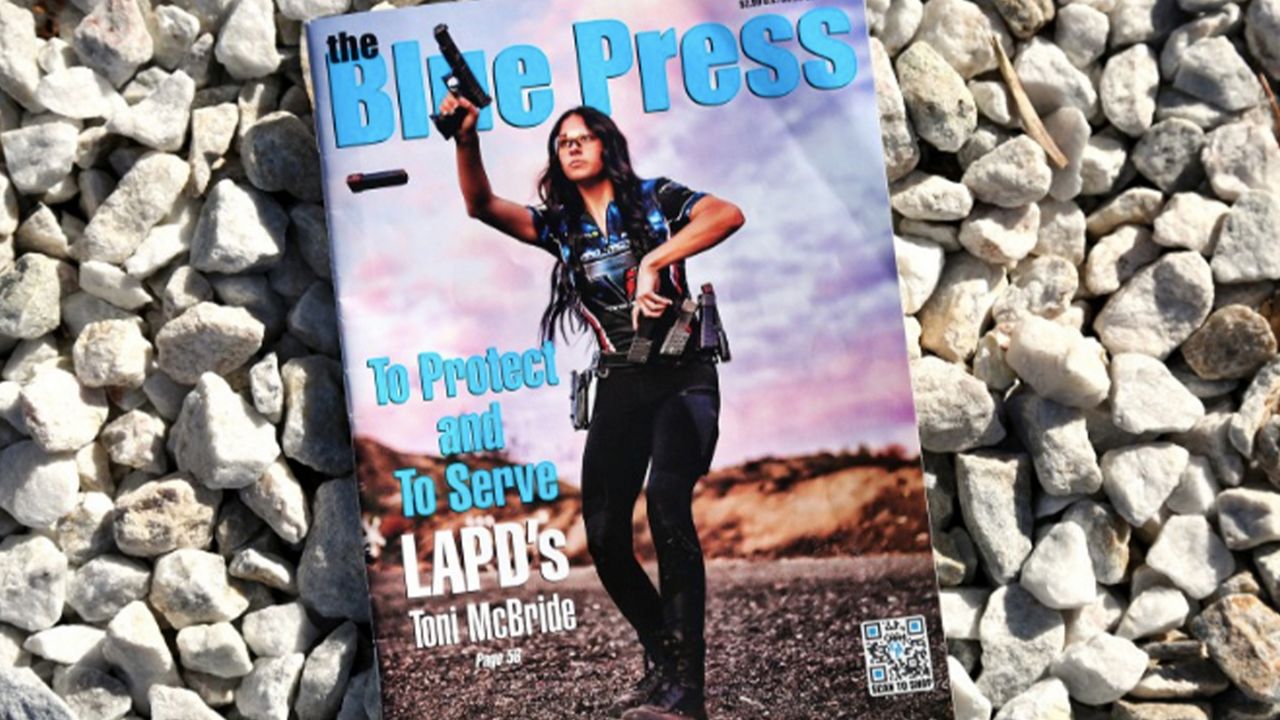 At just 23 years old and near the start of her life in law enforcement, Toni McBride has made the cover of a magazine popular with police and other fans of shooting and firearms. Her precision gun skills also appear in a slew of online videos. Now, LAPD officer McBride is under scrutiny for a deadly officer-involved shooting in April, south of Downtown Los Angeles. The incident was captured on video that is key evidence in the ongoing investigation.

On April 22, 38-year-old carpet installer, Daniel Hernandez was heading north on San Pedro Street south of Downtown Los Angeles and speeding according to witnesses. He slammed into another car and it was a chain reaction accident that involved about five cars and some people were badly injured.

Then, it was reported that Hernandez started slashing his wrists with a box cutter and then got out of his truck and walked to the middle of San Pedro Street towards officer McBride.

Over the course of 15 seconds, she tried to warn Hernandez with a series of seven voice commands, first, “Let me see your hands!” then, “Stay right there!” Then, three times: “Drop the knife!”

Hernandez kept moving slowly toward her.

McBride commanded, “Drop it!” a final time, a split seconds before firing two shots. Hernandez fell to the ground but pulled himself up. McBride fired four more rounds, killing Hernandez.

“There was a man who recorded the incident kept saying 'En vivo, en vivo,' in Spanish, which means 'It’s live, it’s happening right now,' and a guy says to him on the video, 'Hey they didn’t have to shoot that guy.' And then the man who shot the video says 'No she had to shoot because he had a knife.' So the debate over whether this was the right thing to do or not, began immediately,” said LA Times staff writer Jim Rainey.

This LAPD cop shot guns with Hollywood stars. Then she shot a man in South LA. The story of Toni McBride. https://t.co/thuroKvlhB pic.twitter.com/pFNsJS2De4

A coroner’s autopsy would later show that Hernandez had methamphetamine in his system.

Questions were raised on whether McBride could use that as more justification because his actions were being fueled by drugs.

“She wouldn’t have known that at the time. There was no evidence that she knew at the time she pulled up there and confronted him that he was on meth. She probably will state that he was threatening to her and menacing in a way that might be similar to someone under the influence,” Rainey added.

His family and their lawyers say the shooting represents the blind use of force that has haunted Black and Latino communities for generations. McBride’s supporters defended her as an officer trying to protect herself and the public from a dangerous man.

McBride and her actions have provoked intense discussions partly because of her lineage. Her father, Jamie is one of nine directors of the LAPD’s powerful labor union and was involved in six shootings during his first 11 years on the job.

McBride’s decision-making will be broken down and analyzed, shot by shot. The LAPD’s use-of-force policy says the officer’s judgment will be assessed “from the perspective of a reasonable Los Angeles police officer with similar training and experience, in the same situation. An officer must reasonably believes he or she needed to use deadly force to defend against an imminent threat of death or serious bodily injury to the officer or to another person.”

Hernandez’s parents and 14-year-old daughter argue, through their attorneys, that McBride could have done more to deescalate the confrontation. McBride is now back on regular patrol duty and her lawyer says that the April 22 incident “has been very hard” and one she hopes will never have to repeat.