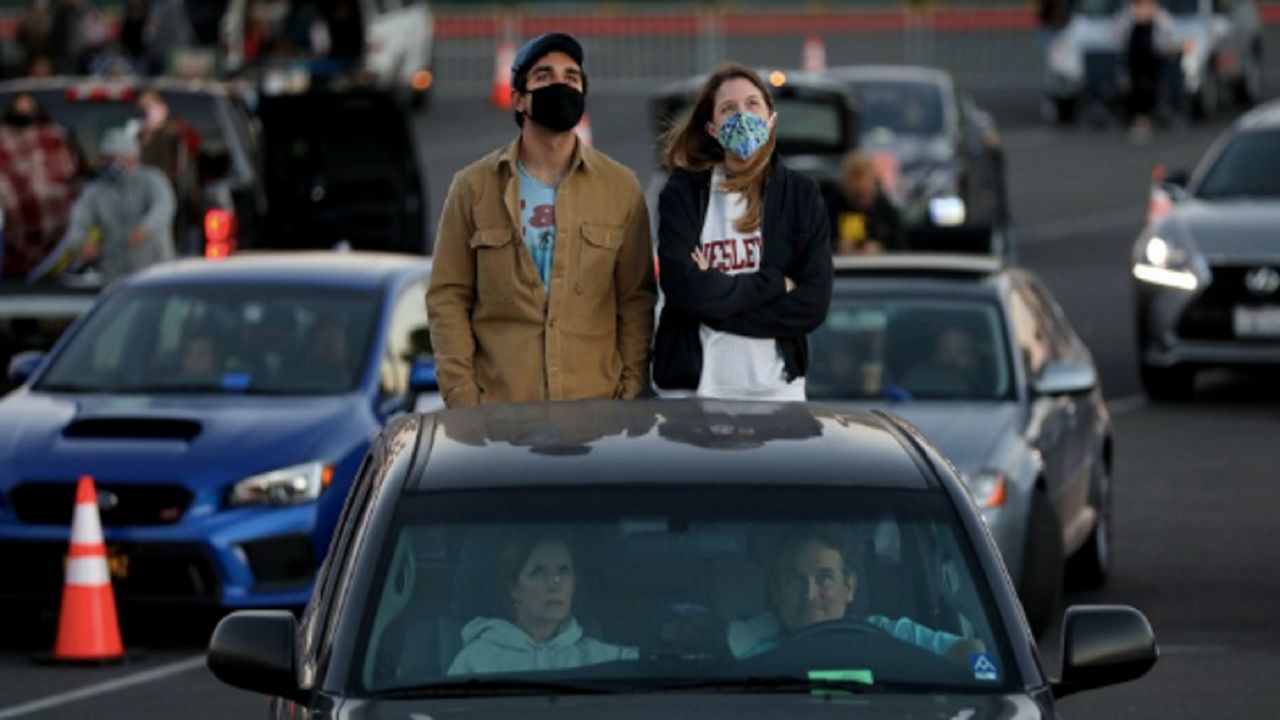 The Concerts in Your Car series at the Ventura County Fairgrounds featured Fishbone and Ozomatli on July 18. “People are glad to get together for music,” said Fishbone’s Angelo Moore. (Gary Coronado/Los Angeles Times)

VENTURA, Calif. — The days of catching a show and watching your favorite band perform live may seem impossible since large gatherings are not allowed. But there may be a temporary answer to fill your concert needs: drive-in concerts.

Los Angeles’s mid-20th century culture was defined by drive-in attractions. In the 1950s, there was the popular Gilmore Drive-In, now The Grove, while the Van Nuys Drive-In Theatre was recreated for Once Upon a Time…in Hollywood.

Some families, wearing face masks, climbed on the roof of their cars to get a better view, while others stayed in and ate pizza as they enjoyed the performance over a well-synched FM radio signal. Concertgoers even honked their approval at the end of songs, all while following social distancing rules.

“It was very surreal. What’s something between dystopia and utopia? It was kind of a mix of both. But I think everyone there appreciated the change of scenery very thoroughly,” said LA Times writer August Brown.

Meanwhile, a recent concert in the Hamptons headlined by EDM duo The Chainsmokers raised questions after footage surfaced of attendees appearing to ignore safety guidelines in the middle of the COVID-19 crisis. Event organizers have pushed back against the criticism, saying they "followed proper and current protocol" and "collaborated with health officials to keep everyone safe."

“You know, I’m trying to imagine the mentality of somebody to risk a life-threatening respiratory disease to go see the CEO of Goldman Sachs open for The Chainsmokers at a $25,000-a-pop charity event concert, where everybody is crushed up against the rail, but that’s just me,” said Brown.

As COVID-19 continues to impact the country, including California, the live music business may be falling off a cliff. Major promoters like AEG have laid off or cut pay for much of its workforce. Companies like Spotify, Universal Music Group, and Warner Music Group have redoubled their lobbying efforts with the National Independent Venue Association to try and protect music venues from total collapse. The companies are supporting the Restart Act, a bill in Congress that would extend and support the Paycheck Protection Program.

The series is not a permanent replacement for live shows. These sets attract about a tenth of the audience that a festival would bring in, and the limited amount of space required for socially distanced cars puts a limit on capacity. But so far, 33,000 people have attended concerts, films and stage shows for the series.

“If you’re a promoter and you have access to a large amount of space where this could work, or if you’re a big outdoor amphitheater that already has a parking lot, you can move stuff out there. Companies like LiveNation have been doing a few of these across the Midwest at some big outdoor amphitheaters…in the South and Midwest where everyone has cars and there’s a lot of land, you could do that," said Brown.

"And then you have smaller promoters land venues like The Grove of Anaheim…they have parking lots there and they could make it work there at smaller capacities. It doesn’t work for everybody, but it is something people can do to keep the lights on,” he added.