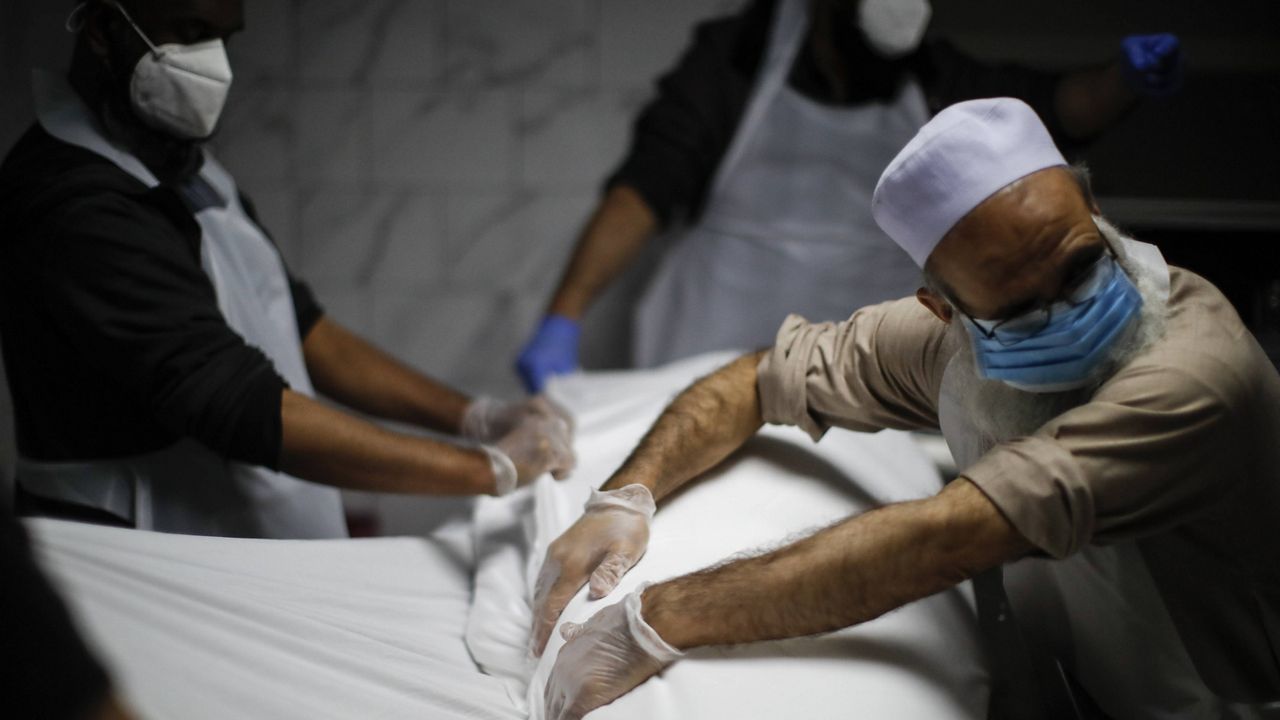 How Islamic burial traditions have been impacted by COVID-19

COVID-19 has forced Muslims across the country to adapt their traditional burial rites and customs when honoring the deceased.

Traditionally, Islamic traditions include four components when laying a person to rest. The deceased is given a ceremonial bath, then they are wrapped in a shroud. Afterwards, a formal last rites prayer is given and a burial is held for the dead.

Shakeel Syed, the former executive director of the Islamic Shura Council of Southern California, told "Inside the Issues" how these observations have shifted over the past year to keep people safe during the pandemic.

“The tradition does try to make accommodations for abnormal circumstances, such as the one that we are currently in,” Syed said. “The ceremonial wash has to be performed with a bag in which the body is placed in, and the gathering of family members to grieve have to maintain the distances as instructed by the CDC and state guidelines.”

Syed explained that family members of the deceased usually enter into the grave to lower the body and place them to face towards Mecca. The body now has to be lowered mechanically to meet social distancing requirements.

“These are just some of the pivots we had to make because of the COVID situation,” he said.

Jewish and Islamic traditions both require burial to occur 24 to 48 hours after death. Syed noted that this requirement became more flexible once it started to create overwhelming stress and challenges for families and volunteers alike, especially as COVID-19 surged throughout Southern California last winter.

“The preferences and the rules and the relations within the tradition is not to impose more difficulties on us, but rather to make it easier,” Syed said. “So there are several provisions to accommodate the abnormal and unusual circumstances.”

Syed said he’s lucky to have not lost a loved one to COVID-19 but admitted his frequent interactions with people who have oftentimes left him unprepared on how to help people while maintaining a safe distance.

“None of us are trained on how to console a mother or a father or a husband or a wife without touching them,” he said. “You are looking them literally in the eyes and expressing all that’s in your heart, and you cannot translate with your visual expressions and you cannot touch them. It’s a very, very heart wrenching, indescribable feeling.”

More than anything, Syed said he looks to his faith for comfort during this pandemic and has relied heavily on the concept that God does not give any person a burden they cannot handle.

“In the Islamic tradition, the belief is that from God we come and to him will return. This is not really an end, but rather a beginning of an eternal journey in the life hereafter,” said Syed. “So we take that comfort, and we hope and pray that those who are losing their loved ones will eventually meet in their life hereafter.”