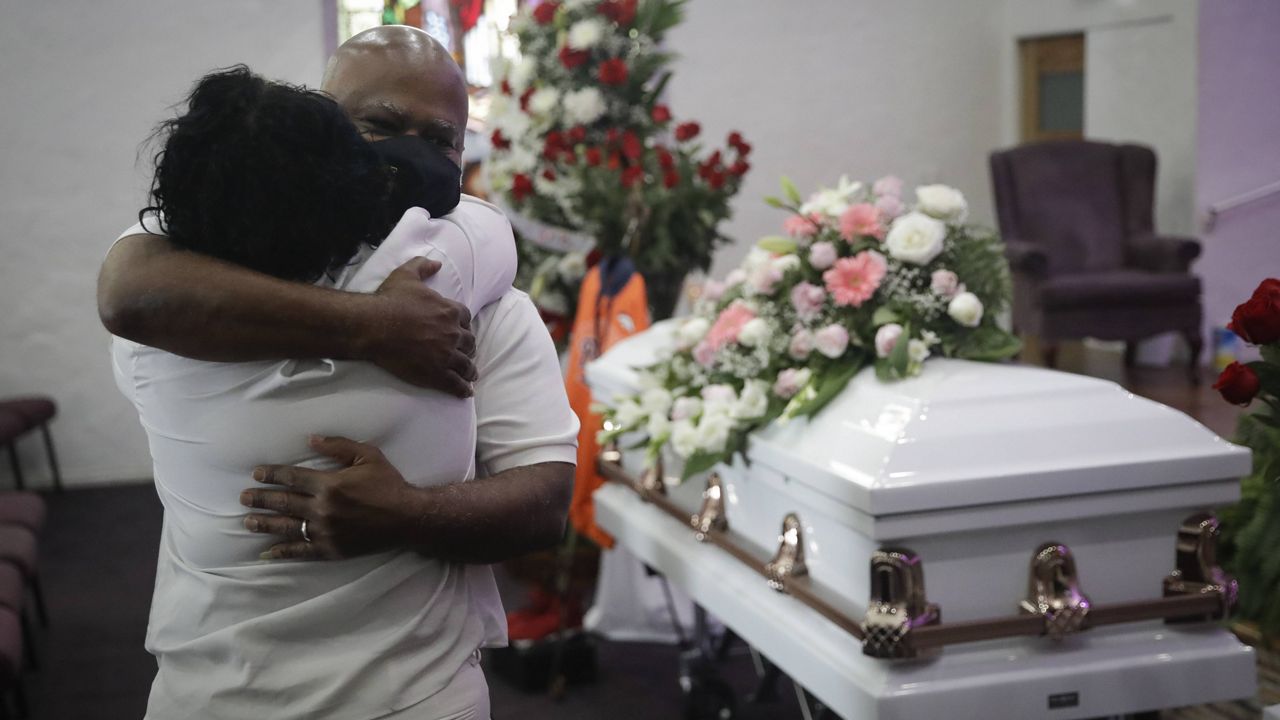 In this July 21, 2020, file photo, Darryl Hutchinson, facing camera, is hugged by a relative during a funeral service for Lydia Nunez, who was Hutchinson's cousin at the Metropolitan Baptist Church in Los Angeles. Nunez died from COVID-19. Southern California funeral homes are turning away bereaved families because they're running out of space for the bodies piling up during an unrelenting coronavirus surge. (AP Photo/Marcio Jose Sanchez, File)

Funeral Homes Struggle to Keep Up With Deaths in Los Angeles

More than 20,000 Los Angeles County residents have lost their lives to COVID-19 and many of the region's funeral homes are struggling to keep up with the pace of death.

Caitlin Doughty, the co-owner of Clarity Funerals and Cremation in Los Angeles, tells Inside the Issues her business has been overwhelmed by calls from people desperately looking for help. Over the past few months, she says so many people died at home without medical care that family members have had to rely upon funeral homes to come collect the dead bodies.

“We’re a small funeral home. We quickly ran out of room to put people in safe, refrigerated storage and everything was all log jammed,” Doughty said. “There weren’t doctors to sign death certificates. They couldn’t move the death certificates through fast enough. There wasn’t enough space for people.”

She notes her staff has also had to consider the safety concerns when working around people who died from COVID-19. The science currently shows dead bodies don’t pose a considerable danger as a source of contagion, but no large scale studies have been completed yet. Doughty points out her bigger concern is constantly meeting with people who recently lost loved ones to the virus.

“I don’t even know what I would do if one of my staff got it, because not only do I care about them and I don’t want that to happen, but also because we can’t afford to lose anybody right now because we’re so swamped by this mass fatality incident,” Doughty said.

Over the past month, COVID-19 cases and hospitalizations have decreased throughout the state, but the funeral owner says deaths are overwhelming the industry and her business is still struggling to keep up with the demands and emotions of their clients.

“Dead bodies are the natural result of a life lived, that’s what happens at the end of it, there’s a dead body,” she explained. “If you come from a culture that doesn’t accept that, it makes what is happening now that much more impactful and stressful.”

As a mortician and death educator, Doughty is trying to reshape the conversation around the subject in the United States. She says our culture has a broken relationship with death, which makes crisis and grief especially difficult during incidents where large fatalities occur.

Doughty explains Americans tend to not discuss death or spend time with a person’s body once they have passed away. She says these cultural traits make people less prepared to handle the emotional repercussions of this pandemic.

“We’ve pulled back on the dead body in America, so it’s completely handled by private businesses, behind the scenes in some kind of scary, spooky area the public shall never see,” she said. “When you set up that precedent, it makes any exposure to the dead, like the fact that we have to bring in refrigerated trucks to store all these people who are dying from COVID, that makes it incredibly threatening.”

During normal times, Doughty’s funeral home encourages people to spend time with the dead before passing the body over to a business. But with COVID-19, she says people are too stressed and scared to have a sacred experience with their recently deceased family members.

“It’s not like they’re relaxed in a safe space at home with the dead. This is someone who dropped dead essentially of COVID and they don’t know anything about whether they’ll even be able to get someone to come pick this person up,” she said. “That really sucks all the magic of meaningful family-led death care right out of the room and turns it into a horror story as opposed to an informed choice.”

Doughty continues to see first-hand the difficulties families face as loved ones die from COVID-19 and hopes people will be more open to talking about death during these times of crisis.