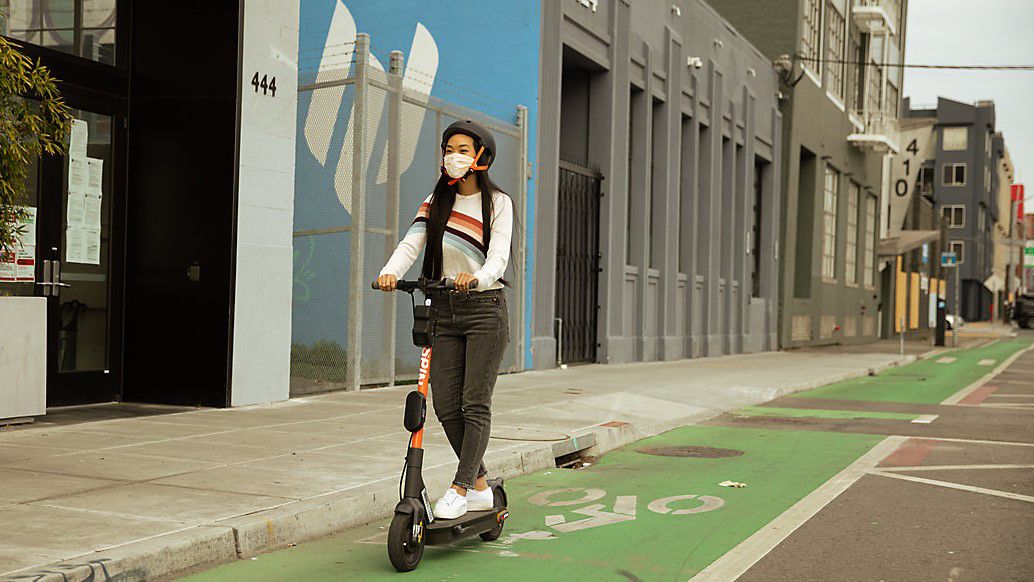 Spin is working with Drover AI on a system that alerts scooter riders when they are illegally operated on the sidewalk. (Photo courtesy of Spin)

Scooters, and scooter programs, in LA and Santa Monica are changing: Here's how

EDITOR'S NOTE: Tune in for the "Along the Ride" segment on "Inside the Issues with Alex Cohen" on Spectrum News 1. Every other week, digital journalist Susan Carpenter will focus on transportation, mobility, electric vehicles, and environmental sustainability in Southern California. To watch this week's segment, click the arrow above.

A year ago, it seemed as if e-scooters were down for the count. The number of electric scooters available for by-the-minute rentals in Los Angeles had plummeted from 37,000 to 700 and 2,500 to 400 in Santa Monica. But with COVID-19 vaccinations on the rise and temperatures heating up, scooter ridership is once again gaining speed — as are efforts to improve their safety and accessibility in underserved communities.

"We're trying to take people out of their cars, or at least give them the option for not having to use a car if they don't want to," said Jarvis Murray, for-hire policy and enforcement administrator at the Los Angeles Department of Transportation. "We want to encourage active transportation, especially after COVID. We're just trying to have access for everyone."

Last week, LA City Council approved new changes to the LADOT scooter program to encourage the city's six permitted operators to deploy their scooters in areas where there aren't good options for getting around cheaply. Dividing LA into so-called operations zones, the LA Department of Transportation charges companies on a sliding fee scale.

Scooter companies now need to pay the city 40 cents per trip in popular areas for scootering, such as Venice, West Hollywood and downtown LA, and nothing in economically disadvantaged areas where residents may not own cars, but there are few, if any, scooters, like Pacoima and South LA.

According to a new Lyft Multimodal Report released Thursday, 33% of riders who use its shared scooter service in LA and who had a household income of less than $50,000 connected to public transit on a weekly basis — almost three times as many riders with a household income of more than $50,000. The report found that 35% of its riders do not own or lease a personal vehicle and that 27% of riders who have access to a personal vehicle use it less because of shared micromobility.

Santa Monica is also preparing to implement the second iteration of its scooter pilot program, effective July 1. In approving the plan, City Council said it will increase the number of operators in the city from two to four and will prioritize "improving device quality, safety and technological advancements." It is currently considering applications from about a dozen companies.

"We've constantly asked for and pushed them for innovation in devices to make them safer and more robust so they can withstand the abuse that comes along with being outdoors all the time being used by multiple users and being used by people who don't own them," said Kyle Kozar, senior transportation planner and bike program coordinator for the city of Santa Monica, which currently allows two scooter operators: Bird and Lyft.

When the e-scooter craze first began in September 2017, many of the models companies used had not been designed for commercial or shared use. Oftentimes, they lasted less than a month before needing to be replaced.

For its part, Bird has been upgrading its scooters in recent months with a model called the Bird Two that includes a steel-reinforced aluminum frame designed to withstand curbside impacts, puncture-resistant tires, a center stand instead of a side stand to withstand tipovers, as well as emergency braking and skid detection.

Addressing scooters' safety issues, however, will take more than hardware upgrades. It will require improvements to riding infrastructure, as well as behavioral change.

Recognizing that many of the people who use scooters in Santa Monica are new riders and unfamiliar with the rules about where they can scoot and park, "We want to see the technology educate and guide and in certain instances penalize or incentivize good behavior," Kozar said.

He pointed to recent success with a software-enabled virtual perimeter, or geofencing, to prevent people from riding scooters on the beach bike path. Going forward, he said the city is looking for other systems to combat illegal sidewalk riding and parking in the public right of way.

Spin, the Ford-owned scooter company, is working on such technology with the Los Angeles company, Drover AI. It uses artificial intelligence on a scooter to determine if it's illegally ridden on a sidewalk, properly operated in a bike lane or parked incorrectly in a public right of way. In each case, it uses sounds to alert the rider.

"We're trying to enable proactive compliance with rules that already exist," said Drover AI Co-Founder Alex Nesic. "Cities are given this burden by the way these things have been deployed so far to do reactive enforcement, whether it's by fines or violations. We're hoping to ensure the viability and longevity of micromobility by using AI, which is much better at following rules than humans."

Ride a Drover-equipped Spin on the sidewalk, and it sounds like a snare drum to get you to stop. Ride it in a bike lane, and you're rewarded with a friendly bell. If you're in the street, it makes no sound. But if you attempt to park it anywhere other than a sidewalk curb, it will ding until it's correctly situated.

The system is currently in beta testing. No final decisions have been made on the exact sounds that will be used once it's officially rolled out, wherever that may be.

"The system is going to be highly customizable," said Phuong Bui, government partnerships manager for Spin, which is applying to be part of the Santa Monica scooter program.

"We can also implement it to say, 'get off the sidewalk,'" she said. "We will work with cities and our stakeholders to figure out what is the best program once we roll it out."