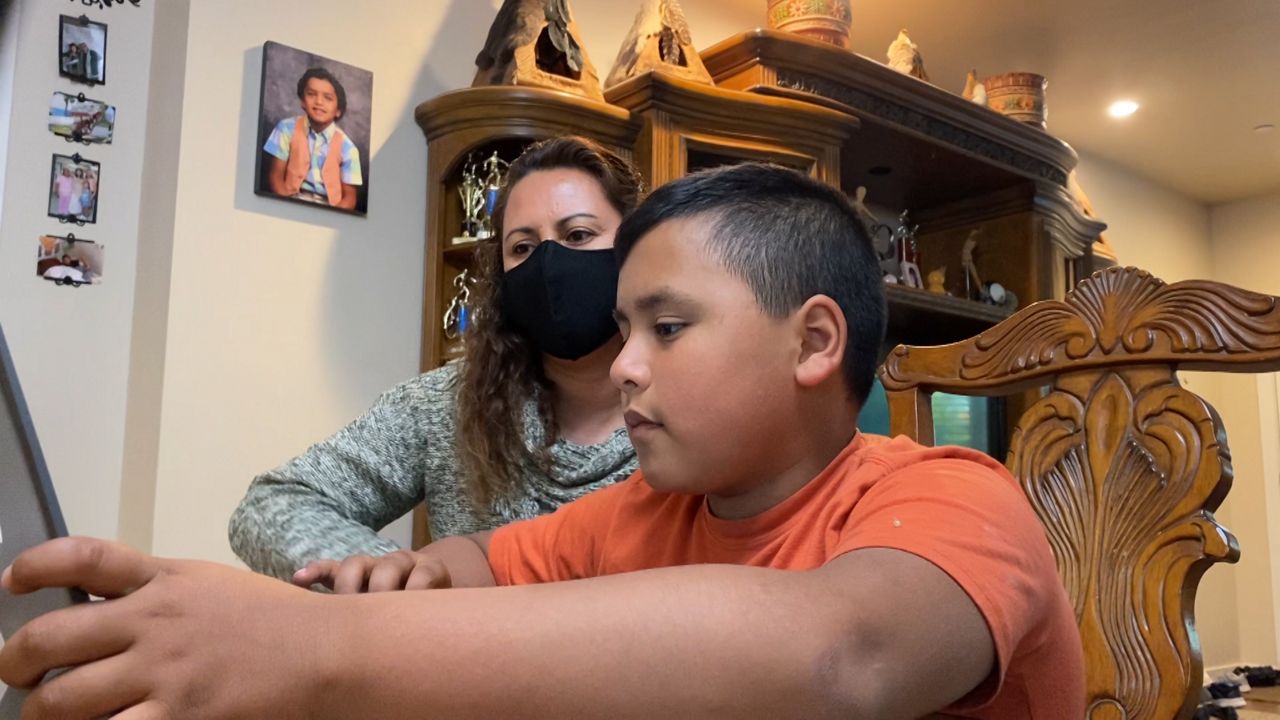 While California is home to the world’s most prominent tech hub, thousands of families are still struggling to adapt to online learning because they either lack technology or reliable internet access.

Maria Garcia, a Sacramento mother, explained how her kids continue to have difficulties with remote learning due to the slow internet connection in the area in which they live.

"They get frustrated every time they get kicked out of class when the WiFi slows down," Maria said, adding that it’s difficult to watch her kids stress about missing class when their internet goes out.

Her son Juaquin is in sixth grade and noted that the internet was his biggest issue when trying to learn from home.

"The first few days were a little hard because," said Juaqin, "there would be low internet, but now the internet is much better."

While their internet has slightly improved, Maria said the issue isn’t resolved and that she sees her kids worry every time they struggle to log into class.

"Sometimes Latinos don’t say anything because we don’t want to cause problems," she said.

Even though she was nervous about discussing her digital problems around distance learning, Maria wanted to make sure her voice was heard.

Asm. Miguel Santiago, who represents one of the poorest districts in Los Angeles, is a co-author of Assembly Bill 34. If passed in the legislature, the Broadband for All Bond Act of 2022 would ask voters to approve a $10 billion bond. The funds would be used to invest in broadband infrastructure so communities across California can access faster internet.

“This is absolutely an imperative that we get this through, put it on the ballot, and get it done so we can finally attack the issue of income inequality that relates to broadband,” Santiago said during a press conference for the bill.

Currently, a statewide coalition, including the California School Boards Association, is urging Gov. Gavin Newsom to invest $8 billion in immediate funding to connect Californians and help close the digital divide.

Throughout California, there are 8.4 million residents who live without broadband subscriptions, including a disproportionate rate of underserved rural, tribal and communities of color.

Manny Rodriguez is a senior legislative associate with Education Trust-West, a nonprofit working to close opportunity achievement gaps. He explained that California legislators need to do more to address the lack of basic internet access throughout the state.

“I think when you consider we’re the fifth largest economy, we’re the home of Silicon Valley, it’s embarrassing that the digital divide is such a huge, pressing issue and it’s leaving so many of our communities behind,” Rodriguez said.

Rodriguez, who grew up in a largely Latino population, added that he’s seen firsthand how the digital divide primarily affects communities of color.

“I just hope our policymakers approach this with an equity lens,” he said. “How do we meet the needs of our low-income students, our communities of color, rural communities? The pandemic has highlighted how many have been left behind, and they’re the ones that need these solutions and need them urgently.”

Rodriguez said it hurt him to see the viral photo of two young girls using Taco Bell’s WiFi in order to get an education during this pandemic. Stories like these, and hearing about the Garcia family, drive him to keep pushing for broadband equity in California.

Marcia said she’ll continue fighting for her kids to get the best education possible as they continue to learn from home.

"I’ll keep trying to use my voice until we’re heard."

AB 34 is scheduled to be heard and voted on in the Assembly Committee on Communications and Conveyance on April 14.

So far, State Superintendent of Public Instruction Tony Thurmond, California School Board Association President-elect Dr. Susan Heredia, and California State Association of Counties representative Luis Alejo are in support of the Broadband for All Bond Act of 2022.