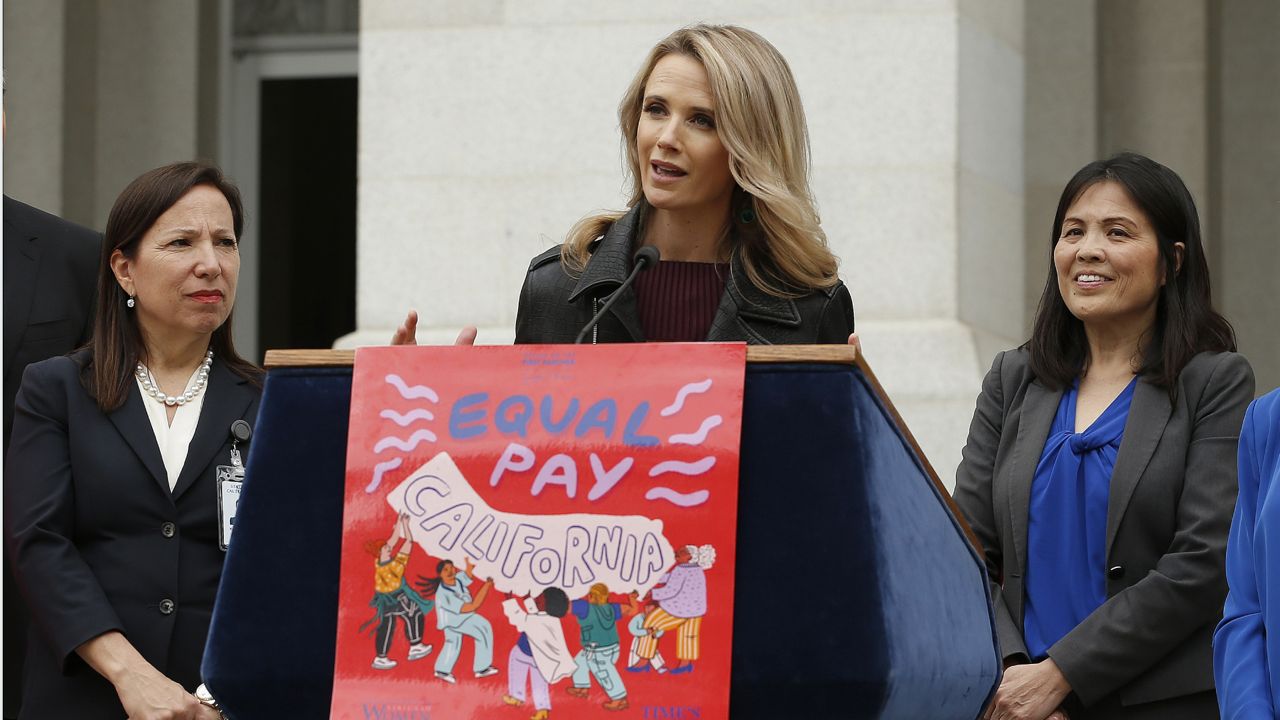 California has some of the strictest equal pay laws in the nation, but many women are continuing to make less than their male counterparts.

On Equal Pay Day, California’s First Partner Jennifer Siebel Newsom announced companies such as Twitter, Adobe, and Mattel have signed California’s Equal Pay Pledge, which is one of her efforts to close the state’s wage gap and boost equity in the workplace.

Prior to becoming First Partner, Siebel Newsom spent years working to empower women throughout her career as a documentary filmmaker.

For the last two years, she’s been using her platform as California’s First Partner to bring awareness to issues like closing the gender pay gap and helping working moms across the state. Siebel Newsom shared that elevating women’s voices is her passion and life’s work.

“I benefit from so many women who have touched my life and been a friend to me and been an inspiration to me,” she said.

Siebel Newsom said women like her mother, grandmother, former First Lady of California Maria Shriver, Regina Scully, and Amy Ziering have all been mentors who have helped her succeed as a filmmaker and working mom.

As First Partner, Siebel Newsom points out she has made it her goal to help women advance in the workplace by closing the gender pay gap.

For women of color in California, the gap is even wider. Black women make 52 cents for every dollar paid to a white man, Latinas make closer to 55 cents, and Native American women only make 50 cents to the dollar.

“In California alone, we’re losing $87 billion annually to the pay gap. So can you imagine if we close that pay gap here in California, it’s $87 billion in our pockets,” Siebel Newsom said.

When Siebel Newsom became First Partner in 2019, she teamed up with the California Commission on Status of Women and Girls to create Equal Pay CA. Siebel Newsom explained that she wants to turn our state’s strong equal pay laws into the smallest pay gap in the nation.

“It was really important to me to take Senator Hannah Beth Jackson’s Fair Pay Act and basically ensure its proper implementation and enforcement and that’s really what we’re doing,” she said. “We’re trying to inspire the private sector to get on board and create workplaces where women can have seats at the table of power and where women can earn their fair pay and their fair due.”

During this pandemic, Siebel Newsom said she struggled trying to balance her children’s education, First Partner duties, and her work as a documentary filmmaker.

“I felt like my brain was fried, split in multiple places and that was, you know, I’m First Partner and I don’t just have work here in the office related to gender equity and helping hold children and doing everything we can on the policy side,” Siebel Newsom said. “But I’m also my husband’s partner, so he’s carrying 40 million people on his shoulders and so for me it was how do I keep him strong.”

She notes the pandemic also took a toll on her kids’ mental health and said she wishes she could have done more to help them while they struggled with anxiety and Zoom fatigue.

“It was hard too because I was so focused on California families, and in the very beginning of the pandemic, I was doing everything I could during the kids’ spring break as well when I should have just tried to be present with them,” she added.

Siebel Newsom said one of the silver linings she’s observed in the past year has been an increased awareness of the value moms bring to the workforce.

“I would hope that I can be part of that legacy of really awakening people to the fact that these are big structural problems that need to be changed and the way to change them is more working mothers in leadership and more value of women and value of women’s work and value of care,” Siebel Newsom said.

She hopes her new initiative will be the first of many steps in helping all California women receive fair pay in the workplace.