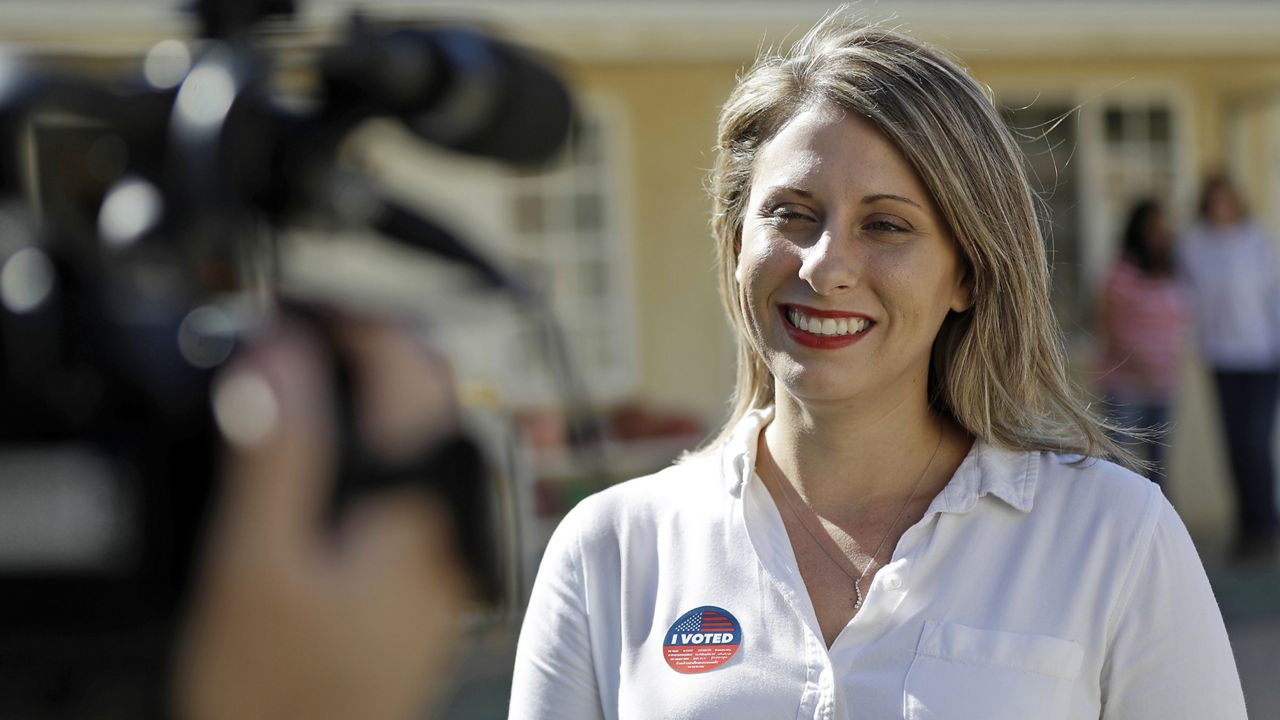 FILE - In this Nov. 6, 2018 photo, Katie Hill, then a Democratic candidate in California's 25th Congressional district, talks to a reporter after voting in her hometown of Agua Dulce, Calif. (AP/Marcio Jose Sanchez)

It's been about a year since former California Rep. Katie Hill (D-Agua Dulce) resigned from her seat after facing allegations of inappropriate behavior with staffers. Since then, she has written a book titled She Will Rise, formed the political action committee HER Time, and embarked on a podcast named after the scandal that ended her career on Capitol Hill: Naked Politics with Katie Hill.

"The name is obviously a play on what happened with me and the photos that everybody knows about," she tells Inside the Issues.

The podcast dives into politics' inner workings to give people an idea of how the government runs and how politics work.

"For me, who came from completely outside of that world, as a candidate, I felt like I had an obligation to try to peel back those curtains even when I was running. What I said to myself was, I don't know if I'm going to win, but I want to make sure that there's something that comes from this, even if I don't," she explained about where the idea for the podcast came. "For me, that was bringing people along, and that was helping people understand what it was like and what it was going to take to actually affect change that was very difficult to convey to people when you're in elected office because there's no time, because you have so many different things you've got to balance in terms of the people who might be listening."

There's a fear when in public office, she said, of speaking the truth about some things because it might cost a politician their re-election.

"I feel like I don't have that barrier anymore," she said. "I have a full ability to use my knowledge and help others to understand what's going on because that's how we effectively change things."

"In my election, I won by nearly nine points, so it wasn't really even close. It was something where it felt like the district had really moved in a substantial way," she said. "I think there's a lot of analysis that needs to be done that will help inform the strategy for 2022 and beyond."

Over the last year, Hill has thought a lot about what she's been through and has even considered leaving politics altogether.

"Frankly, it's a decision that I, kind of, vacillate on sometimes, where I feel like it would still be easier for me to just kind of walk away and be jaded and say, 'I don't want to be a part of this anymore,' but the problem is I really still believe in it," she said. "I still believe in politics. I believe that the will of the people is ultimately going to prevail. I believe that we have to make our system of government better and that the only way we're going to do that is by electing people who care and have the capacity to govern."

A judge recently granted Hill a temporary restraining order against her ex-husband, Kenny Heslep, after she said he choked her unconscious, threatened her with a gun, and abused her pets throughout the span of their relationship. Hill blames Heslep for leaking the photos that show her naked in some of them and kissing a former staffer in others.

"I sometimes do fantasize about disappearing and changing my name and going and working on a ranch or something like that," she said. "But so far, I'm sticking around."