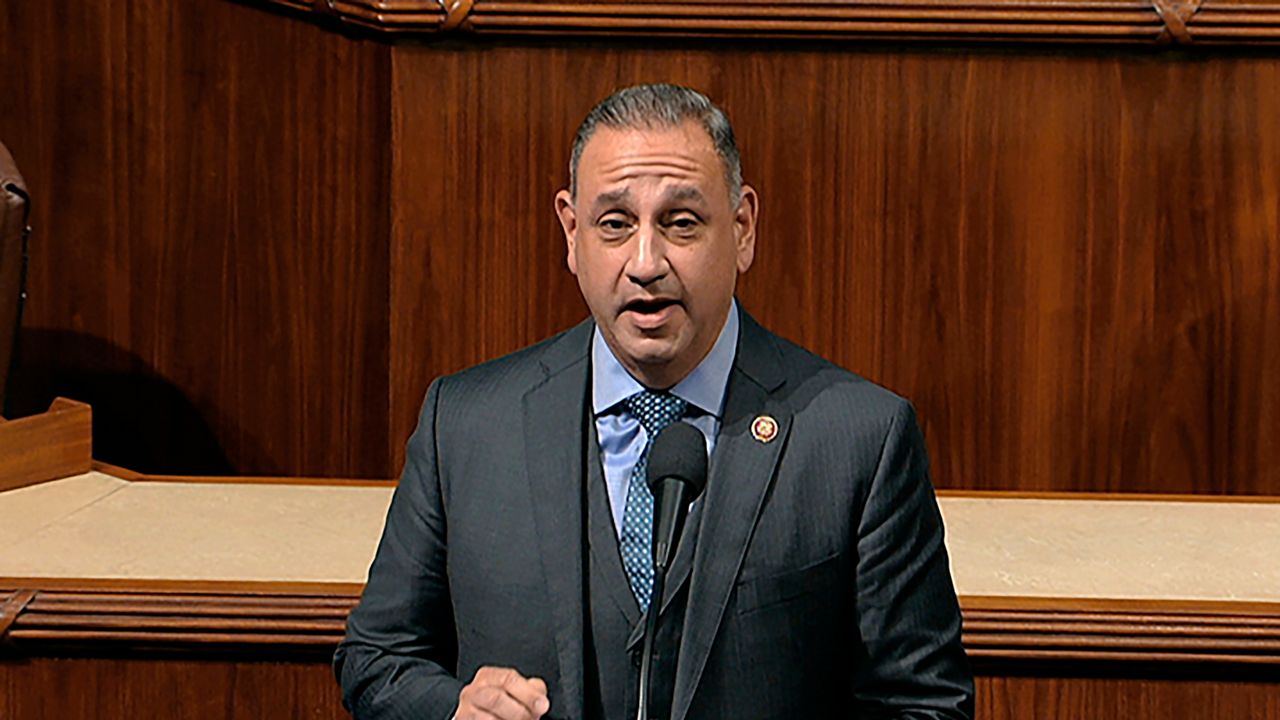 In this Dec. 18, 2019 file photo, Rep. Gil Cisneros, D-Calif., speaks as the House of Representatives debates the articles of impeachment against President Donald Trump at the Capitol in Washington. California is one of the most heavily Democratic states in the country, but Republicans this year are determined to regain a string of U.S. House seats the party lost to Democrats two years ago. President Donald Trump, who wants the House back under GOP control and House Speaker Nancy Pelosi demoted, has said that with hard work Republicans "can pick up seven seats in the state of California." (House Television via AP, File)

Both Parties Disagree On How Much Unemployment Insurance Americans Should Get. Rep. Gil Cisneros Weighs In

In a new coronavirus stimulus package called the HEALS Act, Senate Republicans proposed reducing unemployment insurance to $200 a week through September. Unemployed people received $600 a week from the original CARES Act but it expires July 31.

Democrats proposed the HEROES Act in mid-May, which would extend the $600 a week unemployment insurance benefit through January 2021. Democrats and Republicans now need to find a middle ground between the HEALS and HEROES acts before a bill is signed into law — and time is of the essence.

“We want to get this done. We passed the HEROES Act over two months ago, which would provide more relief to the American people. Another stimulus check would have extended unemployment insurance, would have been money for schools, and for local governments,” Cisneros said. “Unfortunately, the Republicans in the Senate, in the House, even in the White House, the president — they all just sat around doing nothing — let this go for two months and now we are in a situation where the unemployment insurance has run-out. You know we need to act.”

Republicans have argued that providing unemployed people with $600 a week deters them from looking for a new job. Cisneros doesn’t believe that’s true.

“I think it's ridiculous for them to think there [are] 30 million people at home refusing to go to work because they're making more on unemployment insurance right now than they would at their job,” he said. “People want to go to work. They want stability in their life. That's what a job provides. The stimulus check, the extra $600 that we provided, both of those were to provide comfort in a time of instability right now to the American people that would allow them to keep paying their bills, to put food on their table, to take care of their families.”

“We need to make sure that we take care of people,” he said. “You have to have a heart right now for these people that are going through this pandemic. Nobody wants to sit at home. People want to go to work, and it’s not $600 that is stopping them from going to work. It’s the lack of the number of jobs that are out there in the economy is what’s keeping people on unemployment insurance right now.”

Many parents who are still working are facing a different challenge during the pandemic: No school and no childcare. Cisneros and Rep. Don Bacon, who represents the Second District in Nebraska, are announcing a bill this week that would provide support for childcare centers if it passes.

"We need to provide support to these businesses that are taking care of our kids so that parents can go back to work."@GilCisnerosCA wrote a bill with @RepDonBacon that will give federal funding to childcare centers for sanitation costs. They will introduce the bill this week. pic.twitter.com/81TALJmifN

This childcare bill will be brought into a bigger package, Cisneros said.

“We need to provide support to these businesses that are taking care of our kids so that parents can go back to work, and so our bill does that,” he said. “It provides to make sure a place where children will be able to go and they will be safe and there will be sanitized and it will hopefully take care of them while they’re there, and they don’t have to worry about catching the virus at all.”

Cisneros said schools in Southern California are not ready to reopen.

“Thank God the recommendations [from] the Orange County Board of Education don’t carry any weight, and it’s really left up to the school districts and the state to decide when schools are reopened,” Cisneros said. “I have two 6-year-old twins. Me and my wife want them to go back to school, they want to go back to school and be with their friends, but the recommendations that they came out with of no social distancing, not having to wear masks, not following the CDC guidelines or the state public health guidelines — those recommendations are just ridiculous.”

Cisneros said schools should only reopen when students, teachers, and administrators can return safely.

“This is why I’ve been advocating that we need to provide more money to our schools so they can take the steps necessary in order to keep children safe. This is one of the things the HEROES Act had. It had $90 billion for schools so that schools could hire more teachers so that they could space out the classrooms so that desks weren’t so close to each other, so there would be [fewer] children in each class. These are the steps we need to take. They need to wear masks. We need to make sure that we follow these guidelines, these steps,” he said.

“We’re seeing it throughout the country right now: We just kind of opened back up and hoped for the best, and now we are in a worse situation than we were at the beginning of this pandemic,” Cisneros said. “And so we need to take steps in order to protect ourselves, and we can’t just send kids to school and hope for the best.”